22 September 2012
23
At the end of the past 2011, photos of new anti-aircraft self-propelled guns made in China began to appear in the profile media. The machines, designated as PGZ-07, appeared on the existing photos in several copies, which led to the appearance of a version about the beginning of deliveries of new ZSUs to the troops. China does not often make such equipment, so the new PGZ-07 attracted the attention of specialists and amateurs of military equipment from all over the world. The fact is that earlier the Chinese defense industry was engaged in copying and “rethinking” foreign constructions, mainly Soviet ones. The new PGZ-07 ZSU, in turn, resembles foreign equipment only in part. 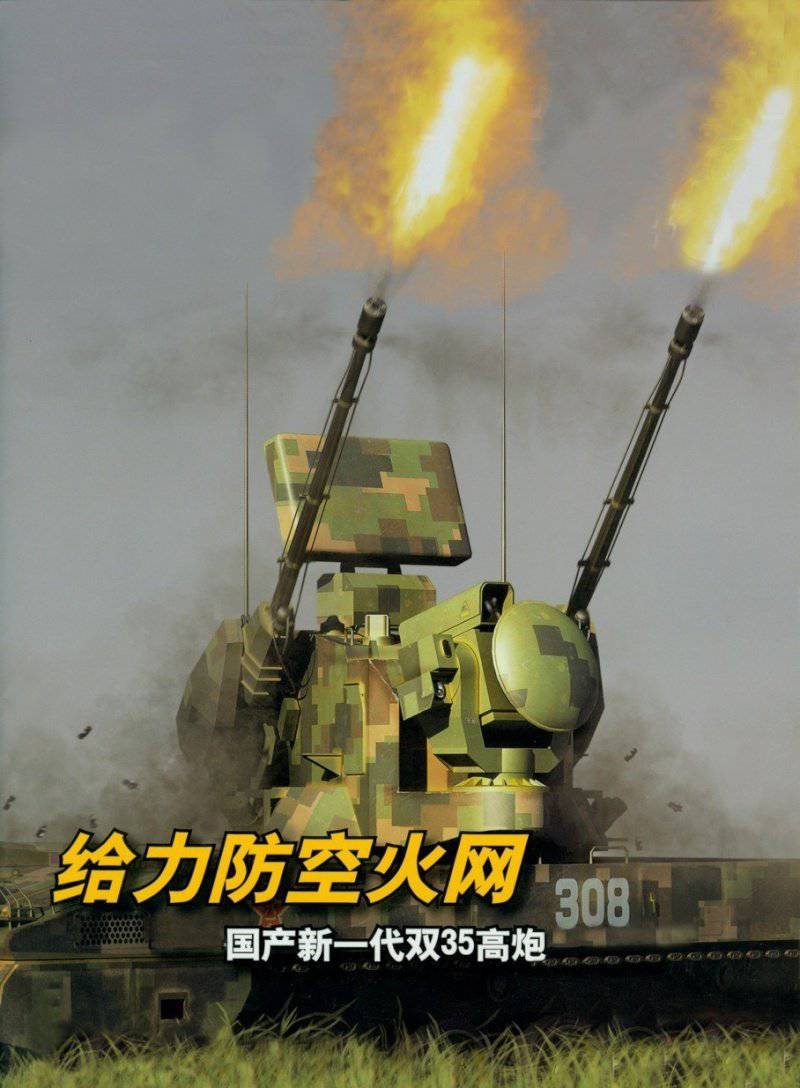 Judging by the appearance, the new anti-aircraft self-propelled gun is a development of the "Type 90-II", created about twenty years ago. This is a tracked chassis with a rotating turret mounted on it. Armament PGZ-07 - two automatic guns of 35 mm caliber. The basis of the self-propelled gun is a tracked chassis, in appearance it closely resembles the corresponding unit of the PLZ-45 self-propelled howitzer. If this assumption is true, then you can imagine the main characteristics of the anti-aircraft installation. According to reports, the self-propelled gun equipped with a 155-mm howitzer is equipped with a 500-520 horsepower diesel engine. With a combat weight of 33 tons, self-propelled guns accelerate along the highway to 55 kilometers per hour. While driving over rough terrain, a self-propelled gun is capable of operating in the same battle formations as all available tanks. From these figures we can draw certain conclusions about the likely characteristics of the ZSU. In favor of the version of the borrowing of the chassis from an older artillery self-propelled guns, the approximate layout of the new ZSU also speaks. So, from the available photo materials it follows that the PGZ-07 engine is located in the front right side of the armored housing. This is confirmed by the workplace of the driver, shifted to the left of the axis of the machine, the drive wheels of the caterpillar mover in the front of the hull, as well as the presence of a hatch in the aft sheet. Through the latter, the crew landed. Regarding the reservation of self-propelled guns PZL-45 and ZSU PGZ-07 there is no exact information. Obviously, this is a homogeneous bulletproof protection, although one should not exclude the greater strength of the case.

Arms anti-aircraft self-propelled gun mounted on a rotating tower. The tower assembly of complex shape bears two guns, apparently being the development of older 30-mm “Type 90”, two radar antenna, as well as a certain unit of optical equipment. It is often noted that the ZZU PGZ-07 automatic guns outwardly greatly resemble the guns of the Swiss production of the company Oerlikon. In the 80-ies, China bought a number of 35-mm towed guns, and then acquired a production license under the name "Type 90". Judging by the appearance of guns "Type 90" and guns PGZ-07, design weapons was significantly improved. 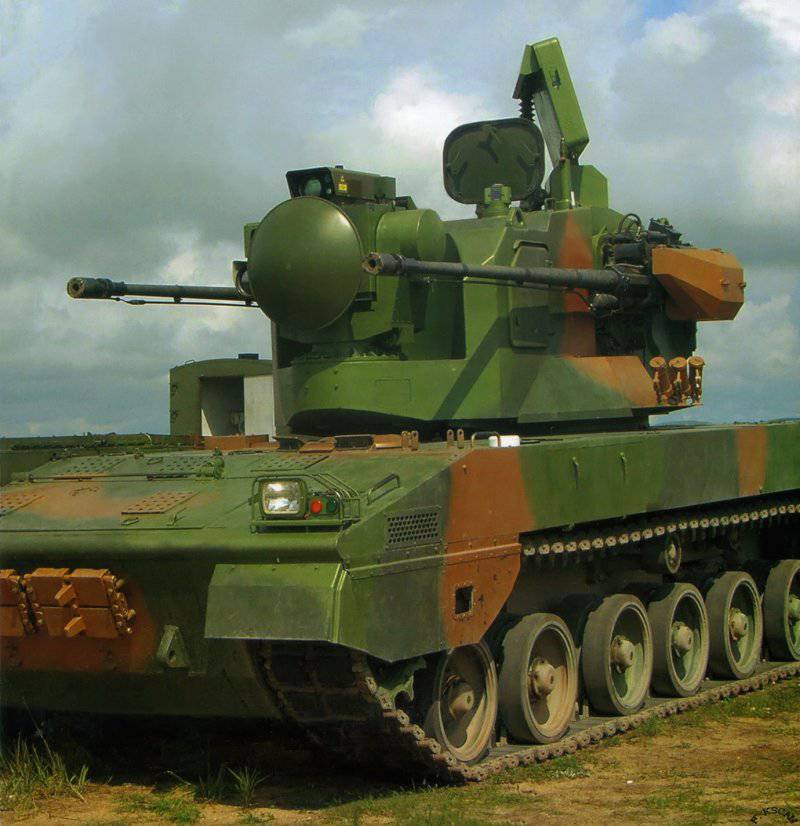 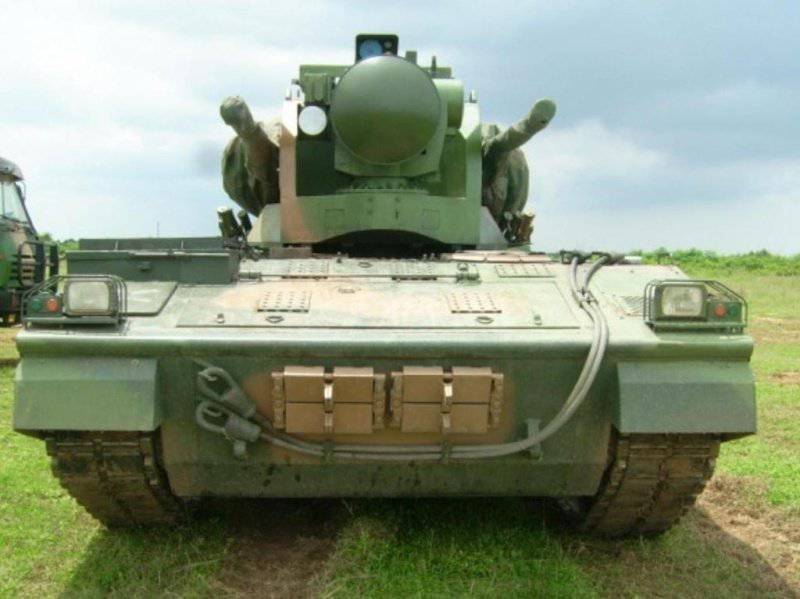 To monitor the air, the ZPU PGZ-07 has a surveillance radar. Its antenna is placed in the back of the tower, when the station is working, it rotates around its axis. Pointing weapons at the target is carried out using the second radar, whose duty is tracking the target and its capture for tracking. The antenna of the second radar is located in front of the tower and can only be rotated in a vertical plane. In general, the concept of the PGZ-07 radar systems resembles the system used on the Soviet Tunguska 2K22 anti-aircraft missile system. When creating the radio-electronic part of the Soviet ZRPK, the goal was to ensure the search and tracking of targets with the own forces of a specific combat vehicle. The earlier Soviet ZSU-23-4 “Shilka” alone could only fire at targets and required external targeting. Apparently, the Chinese military and designers had the opportunity to analyze the experience of exploiting alien Shilok and, creating their own ZSU, made the appropriate conclusions.

In case the enemy uses electronic warfare equipment, the PGZ-07 has an optical-location station equipped with a laser rangefinder. The presence of laser equipment is indicated by warning signs on the station's armored casing. The optical system is located in the front of the tower, on the radar tracking unit of the target tracking. Due to this arrangement, the optical-location station can swing in a vertical plane with the antenna and, possibly, work with it. There is an opinion about the presence of the tracking channel television equipment.

The combat characteristics of the PGZ-07 ZSU are not reliably known. Their approximate value can be established on the basis of indicators of the 90-II Type self-propelled self-propelled gun, which had weapons of similar caliber. The 35 Type 90 cannon fire rate achieved 550 rounds per minute. With an initial speed of at least 1100-1150 m / s, shells could hit air targets at a slant range of up to four kilometers. If it was necessary to fire ground targets, the “Type 90-II” was able to beat 12 kilometers. The arsenal of the old ZSU consisted of two types of shells: fragmentation and incendiary and semi-armor-piercing and incendiary. 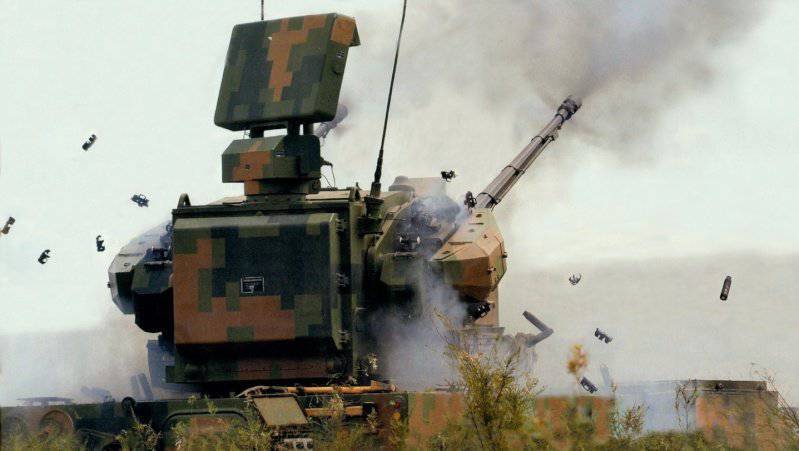 The data on test test shooting of PGZ-07 systems by China were not disclosed. Judging by the absence of rocket weapons, the combat potential of this installation is hardly high. Existing assumptions about the effective range of fire and the composition of weapons suggest that the main purpose of the new anti-aircraft self-propelled guns are helicopters and other low-speed aircraft, forced to approach the attacked object at a short distance. But even in this case, the capabilities of the ZSU do not look high. At the same time, shortly after the appearance of the first photos of the PGZ-07 self-propelled gun columns, some images of the allegedly updated version of the complex got to the Internet. In these photos, the ZSU on each side of the tower have attachment points for anti-aircraft missiles.

The existence of the rocket-cannon variant PGZ-07 has not been officially confirmed, as is often the case with Chinese military equipment. Moreover, the photos of self-propelled guns with rockets themselves raise certain questions: they can be a photomontage. Finally, even if the ZRPK exists, their number is still small. All photos and videos, which captured more than one self-propelled gun, show only purely cannon versions PGZ-07. 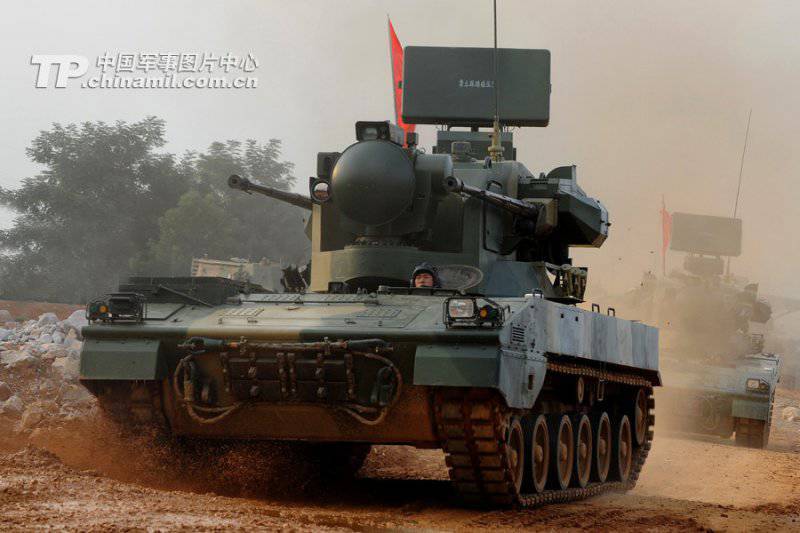 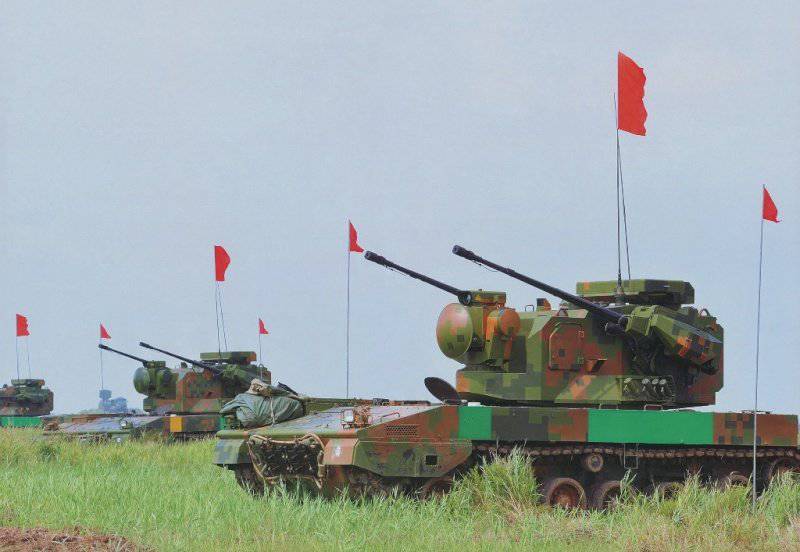 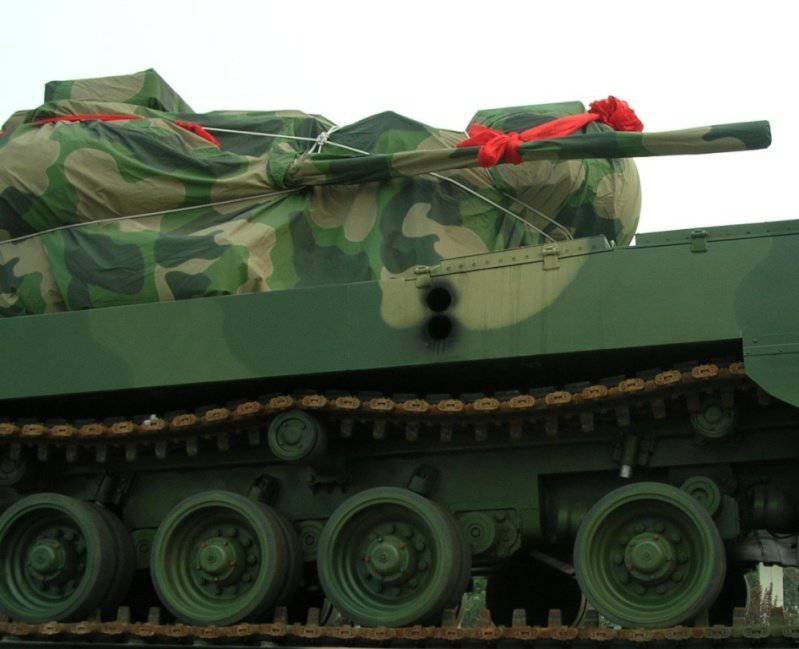 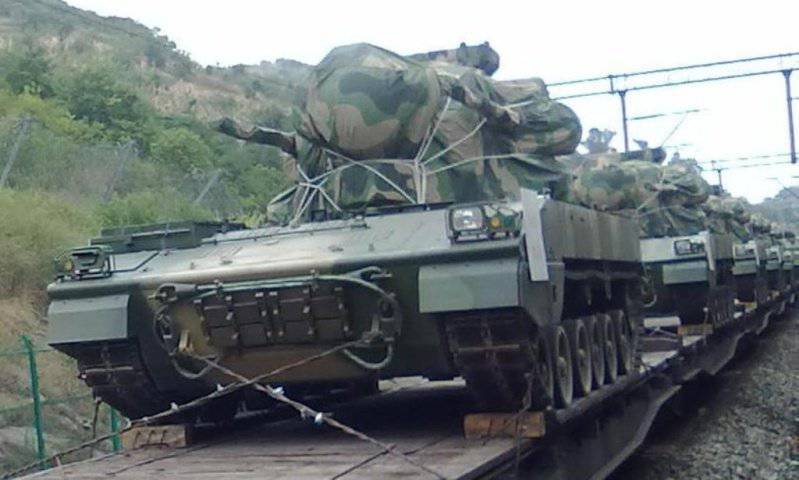 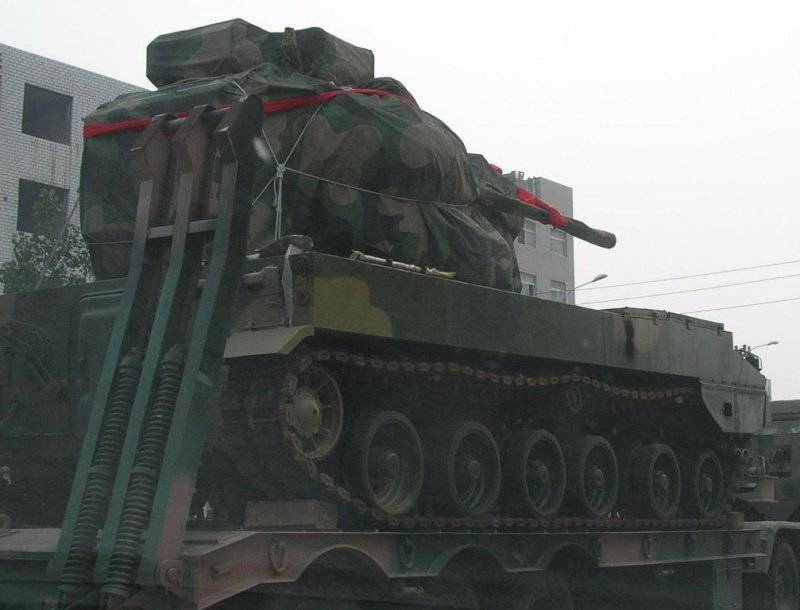 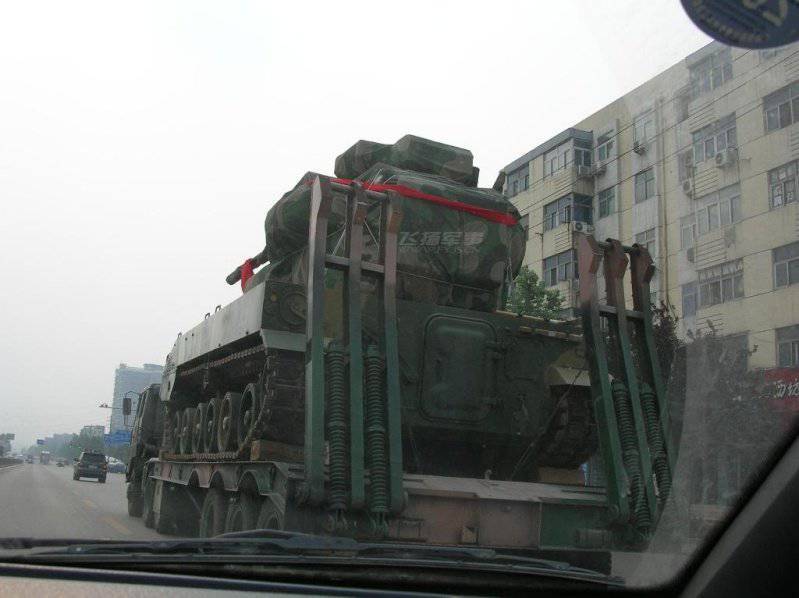