If you are afraid to beat strangers, beat your own. Ukraine is preparing for federalization 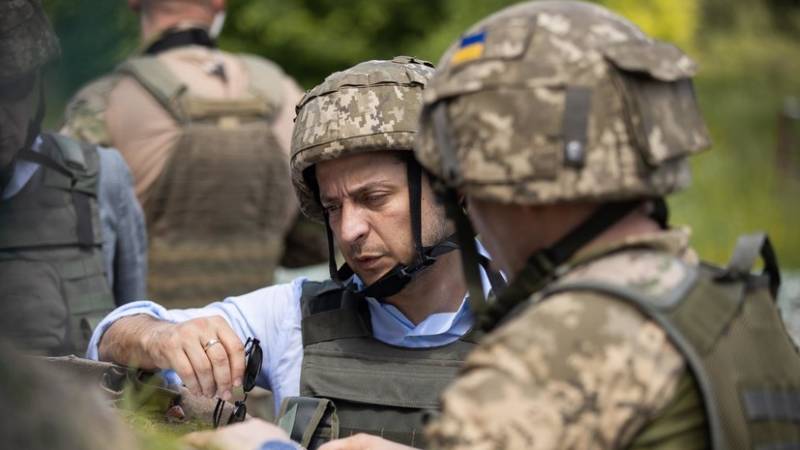 Well, three days ago, in an article about Vice Admiral Kae-Ahim Schoenbach, I mentioned that NATO and the United States were not going to fight Russia, and moreover, there was a rather serious split in the ranks of the alliance. At that time, I was very amused by how the famous Polish-Lithuanian-Ukrainian brigade was preparing for the war.

The preparation was intense. But at home. And no special events. Without warning soldiers and officers. Probably so as not to injure the military. Morally. By the way, the same picture is observed now. The commanders of this same brigade never "injure" their subordinates.

Today, I feel very sorry for those who fight against the enemies of Ukraine in the information field. Especially those who work on a well-known Ukrainian site with a beautiful name, where many politicians and journalists consider it an honor to get into. Today they have work up to their necks. I'm afraid they'll choke. So many new enemies of Kiev appeared suddenly...

Indeed, it is a pity that the office of president is elective and has no boss over it, except for its own people. I'm not sorry, the guys from the ukrosite are sorry.

It was good with the admiral. They sang the anthem in unison, spoke out on TV, complained to the owner and that's it. The Admiral retired. And he became almost the most popular person in Germany.

The President of Croatia Zoran Milanovic set a task for the Ukrainians. Moreover, he constructed the phrase so cunningly that, on the one hand, it is clear that he is sending Ukraine to a known address, and on the other hand, he remains a true ally of the United States:

“We will not only not send the military, but if there is an escalation, we will withdraw everyone to the last Croatian military. It has nothing to do with Ukraine or Russia, it has to do with the dynamics of American domestic politics, Joe Biden and his administration, which I supported.”
How easy, it turns out, to enter the top "great" from the "Peacemaker". That's right, you lined up the phrase correctly, and you are already in the company of Putin, Lavrov, Shoigu and many other very famous and respected people in the world. And not just in the company, but also with a new, additional position - an agent of the Kremlin! It is a pity that on a voluntary basis ...

So what did President Milanovic do?

The Ukrainians say that he is so unbelted that

2. Declared that Croatia would withdraw every single soldier from the combined forces of NATO, if there is a threat of drawing them into hostilities. 80 soldiers have already been withdrawn from Poland just in case.

3. He stated that Euromaidan is a coup that has nothing to do with democracy.

4. He stated that Ukraine has no place in NATO and that Ukraine's path to the EU did not give Ukraine anything.

5. He stated that Ukraine is one of the most corrupt countries.

The president of a NATO member country doubts the safety of his citizens because of Washington's policy! He states that the Americans may be wrong! He does not want to throw his soldiers into a meat grinder! At the same time, he is not afraid of overseas punishment. Horror, from the point of view of "Square".

And how do you like this statement by President Milanovic, where he actually sends Jens Stoltenberg himself and all of NATO along with him somewhere:

“I am watching reports according to which NATO – not a separate state, not the United States – is strengthening its presence, sending reconnaissance vessels. We have nothing to do with this, and we will not have anything to do with that, I guarantee you.”
Seriously, the Croatian president's statement is indeed a serious warning not only to the Americans, but also to the leadership of the alliance. The leaders of the European countries have long been talking about the fact that NATO behaves too freely in Europe, takes on too much. There are politicians in Europe who put the interests of their population, the lives of their soldiers, above the interests of the United States and NATO.

The defensive block was transformed into a military-political one and began to dictate political and economic demands to the governments of European countries. And mandatory.

Milanovic was the first to voice this position. The position of those who disagree, which threatens to turn into the position of opponents of this organization in its current form.

How to relate to President Milanovic?

Personally, I respect his actions. Respect for a man, for a man.

On the one hand, this is the president of the country, which is set as an example by the same Ukrainians in the issue of solving territorial problems. Remember the "Croatian script".

On the other hand, Milanovich saw the fate of Admiral Schoenbach perfectly well. Boldly for the president of a small country.

Who wants to fight, and who only expresses concern and sells old weapons?

Croatia's position is by no means unique.

If you look at the statements of various European presidents, officials and politicians, you get an interesting picture.

Even the most ardent defenders of Kiev in European organizations, those who have repeatedly torn their shirt on their chests with the cry “we will all rush to the rescue as one,” for some reason talk about protecting their own borders.

Not the borders of Ukraine, but their own. And they call on NATO troops to stand up for the defense of their states. At the same time, the Europeans know perfectly well that no one is going to fight, as well as to seize other people's territories.

So what is really happening?

Why is Kiev seething?

And not because of a possible war. The people are talking about another "famine", "cold sea" and the destruction of Ukrainian business!

And the people are right.

Sometimes it is strange to see how a person, completely unaware of what is happening, does quite reasonable things. TV talks about some kind of help from Western countries, but no one sees this help. unloading weapons he sees in Boryspil, he sees a crematorium for Ukrainian soldiers in a mobile German hospital, but he does not see flour for baking bread.

Yes, and people suspect this weapon.

Why would the British and Americans begin to fill Kiev with weapons?

Interesting help, which is sold on credit.

Will the grandchildren pay?

Or will the government give part of Ukrainian lands for RPGs?

Or a crazy aunt in her own kitchen during the Brezhnev era with a rifle for 1 euros in her hands ...

I'd rather do some repairs myself. Only he can’t, the rifle was given to hold by foreign journalists. And they gave so much money for the photo that you can’t even buy a good knife.

For two months the Americans, the British and their assistants have been screaming about the war between Russia and Ukraine. They shouted so that even the Ukrainians believed.

But that was not the goal.

The goal is money! Against the background of rumors about the war, the economy of Ukraine just flies into hell. Assets are falling in price at a breakneck pace.

And who buys them?

It is clear that they are not Ukrainians. The usual: nothing personal, just business.

But who will fight on the side of Ukraine?

Alas, nothing new is happening in this world.

The armies of other countries, if they appear on the territory of this country, it will happen when it will no longer be necessary to fight.

Perhaps they will dilute Ukrainian soldiers, for example, with Czechs.

The government of this country has not been determined specifically. But in some statements, there is an opinion about the possible participation of the Czechs in the war. It is doubtful that this will be done, but even if this happens, it is unlikely that the Czechs will fight better than the Armed Forces of Ukraine.

Washington has long made no secret of the fact that the life of an American soldier is more important to him than the existence of the state of Ukraine.

This is just plain pragmatism. Understanding the fact that sooner or later the units participating in the war will intersect with the Russian ones. Further - a direct path to nuclear war. And then it won't matter who presses the button first.

The Germans also openly declare their non-participation in real hostilities. Even lethal weapons from Germany will not be given to Ukrainians.

Is the same история. We will help! But we will not fight.

In the event of a war, all British troops will be withdrawn from Ukraine. But so far there is no war ... The British are leading a huge grouping in ... Estonia of 1 people. 200 British, 830 French and local Rambos. But almost 300 military specialists are now in Ukraine. About those 100 commandos, specialists in sabotage and actions in cities, everyone tries to keep silent.

"There are no plans to send combat units of British troops to the region, but sanctions are being considered if Russia goes further."

What is the result for today?

The understanding that the country is abandoned, and no help from those who have been talking about friendship and support for many years, has already come to even the most stubborn Ukrainians.

This explains the undisguised impudence of Zelensky, Kuleba and other Ukrainian officials. Today they are just the cat that was cornered. They will rush at everyone, not understanding who is friend and who is enemy.

Today, with a high probability, we can say that Kiev has decided to refrain from war.

Yes, provocations by individual units and battalions, some flying squads and just individual idiots are possible. Some sabotage is likely, but the official operation of the Armed Forces of Ukraine will not be announced. In order not to provoke a response from Russia.

Today, the main thing for Zelensky is to keep the country from a new Maidan. And it will not be Maidan in its classical form. Banking need not worry. The speeches on Zelensky’s birthday showed that these Maidans will not end without bloodshed. The new Maidan will go to the regions. There, where the security forces are not so devoted to the Kiev authorities and simply join the protesters.

It seems to me that the time has come to divide the country. Simply put, the time of federalization of Ukraine.

This is what will be an alternative to the bloody war in the Donbass for citizens. True, there are no guarantees that this federalization will take place peacefully everywhere. Moreover, armed detachments for the forceful opposition to Kiev have already been created. Although they are disguised as territorial defense units against Russia.

Thus, the refusal of the United States and NATO to support the state of Ukraine means at least the end of the existence of the country in the form in which it exists today, and at the maximum, the beginning of the collapse and departure of some regions.