History of the uniform. Khaki appears on the battlefield... 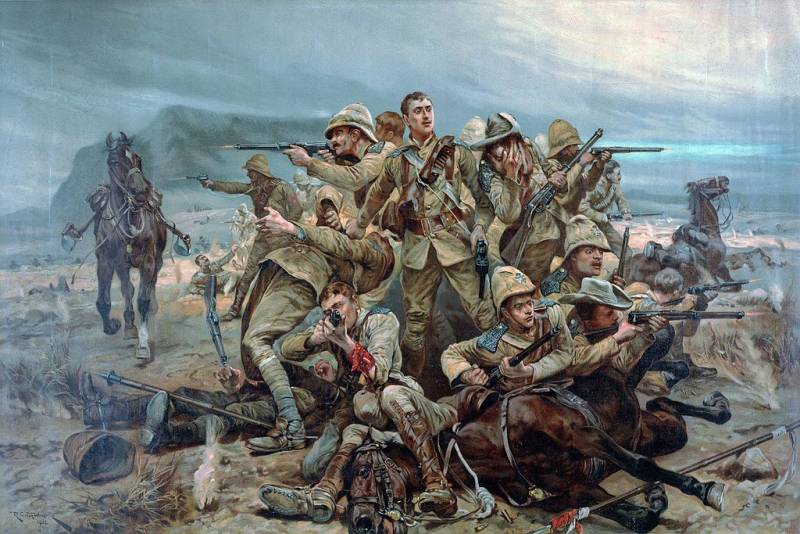 "Hey soldier, have you met him,
My dear friend?" —
“He was dressed in khaki, went into secret.
Look for another guy."
"Hey soldier..." R. Kipling. Translation by V. Vasiliev
History uniforms. In foreign films dedicated to the events of the 1898th century, we often see British officers and soldiers dressed in red uniforms. And at the same time, in films about the beginning of the 1902th century, we already see officers and soldiers in khaki. Louis Boussinard in his adventure story "Captain Head Off" wrote that the British in Africa received the form of khaki directly during the Anglo-Boer War of XNUMX-XNUMX. But is this true and is it possible to rely on the descriptions of the French author who wrote the book about the “bad Englishmen” in everything?

Indeed, the use of "red jackets" took place, for example, during the Anglo-Zulu War and the Anglo-Egyptian War (1882). However, many British officers took a much more practical approach to dressing their soldiers, and this was especially the case in India. It is known that the khaki cloth uniform, the Urdu word for dust, was first worn by Indian irregulars on the Northwest Frontier as early as the late 1840s. That is, she met already during the Uprising. During the Second Anglo-Afghan War of 1878-1880, khaki clothing was already very widely used.

The fact is that the regiment commander received money for uniforms, and many of them began to consider it simply pointless to buy expensive fabric for clothes, in which, among other things, it was also very hot. Therefore, they began to buy cheap locally produced cotton fabric, and sew uniforms from it directly into the regiment. The benefits of such a replacement turned out to be very significant in monetary terms, so the supply of this fabric soon began to be centralized. 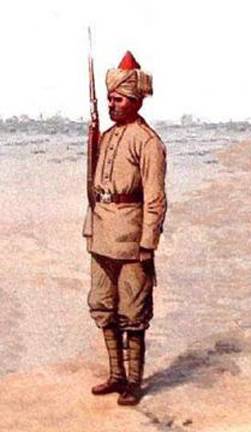 Private sepoy of the 31st Madras Light Infantry Regiment (now 3rd Balochsky). Color lithograph by Richard Simkin (1840–1926), 1888
In 1885, a cheap "dusty" gray mineral dye was patented, and khaki uniforms were allowed in all regiments of the Indian Army. In Africa, General Wolseley's soldiers wore light gray woolen uniforms specially made for them during the Seventh Anglo-Ashanti War of 1896. These and other khaki uniforms of gray twill or sand-colored cotton fabric were worn by British troops during Mahdist war 1884-1885. Thus, from the mid-1880s, the khaki combat uniform was the usual marching dress of the British troops in the empire, and became the official "foreign dress" as early as 1897. So it is unlikely that the British infantry advanced on the position of the Boers in their bright red uniforms. It is clear that Boussenard wanted so much, but in reality it was no longer so. In addition, troops from India were the first to be transferred to Africa, and they had long been completely dressed in khakis.

British soldier in khaki uniform 1900. Drawing from Foster G., Hoch P., Muller R. "Uniformen europaischer Armeen" VEB, Berlin, 1978. P. 279
In 1902, a slightly darker shade of khaki was chosen as the color of the domestic service uniform. During the campaign in the south, the white tropical helmet was often brewed in tea by soldiers themselves or other makeshift dyes were used to make it less visible. It was later fitted with a khaki cloth case.

In 1898, during the campaign of General Kitchener in the Sudan, the best units of the Connaught Rangers and the North Staffordshire Regiment at the battle of Omdurman still wore the old uniform, that is, red coats, black trousers and white helmets, and ... that is why they became the last British troops, wearing red on the battlefield! 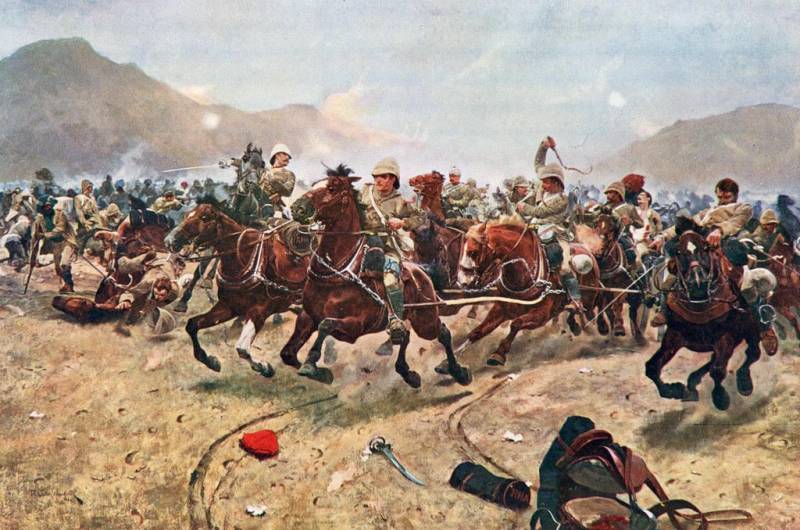 "Save the guns!" Battery E of the Royal Horse Artillery retreats from the Battle of Maiwand after a stunning attack by the Afghans. Painting by Richard Caton Woodville (1856–1927)
The khaki uniform was also worn by the soldiers of the British militia - yeomanry, which was recruited from village gentlemen, horse owners. This volunteer cavalry was formed for the first time in 1730, during the Jacobite uprising. Then the local defense detachments bought horses, uniforms and weapon. In 1794, when the country was threatened by the invasion of Napoleon's troops, Parliament proclaimed the Provisional Cavalry Act, which formalized this system. The law required horse owners to equip one cavalryman for every ten horses they owned; those with fewer than ten horses were grouped together and had to share the costs among themselves in proportion to the number of horses they owned. 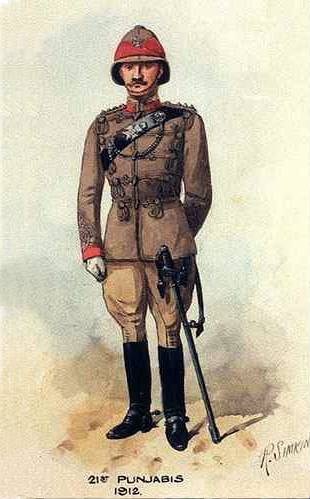 Officer of the 21st Punjab Regiment 1912 Color lithograph by Richard Simkin
As a result, by the end of 1804, 44 people stood in the ranks of the yeomanry. Parliament lifted the restriction that yeomanry could only be called upon to defend the country, stating that the country needed to be protected on the continent as well. 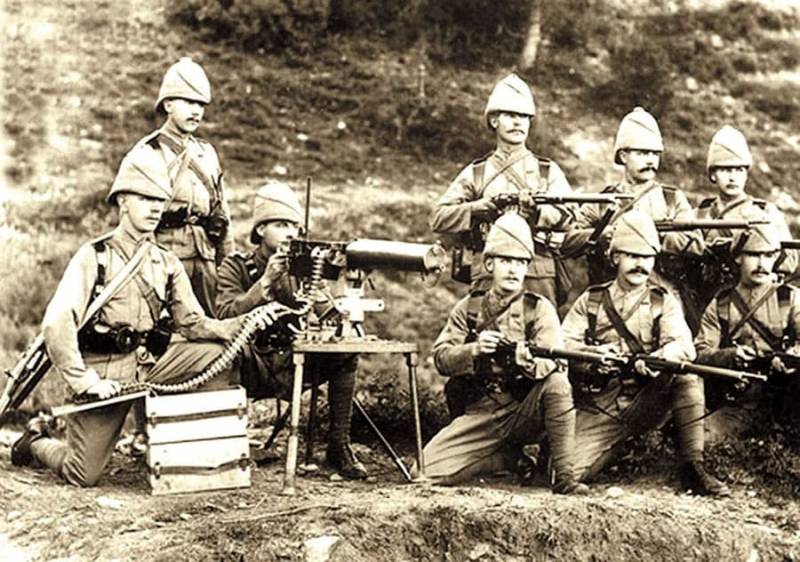 British soldiers in khaki with a machine gun
Before the war in South Africa, the main task of the yeomanry was to help the authorities, that is, they served as a kind of national guard. Training was held on weekends, and several times a year the entire regiment gathered for joint training and reviews. Yeomanry units were named after the county in which they were raised, such as the North Somerset Yeomanry, the Sussex Yeomanry, the Yorkshire Hussars and so on. 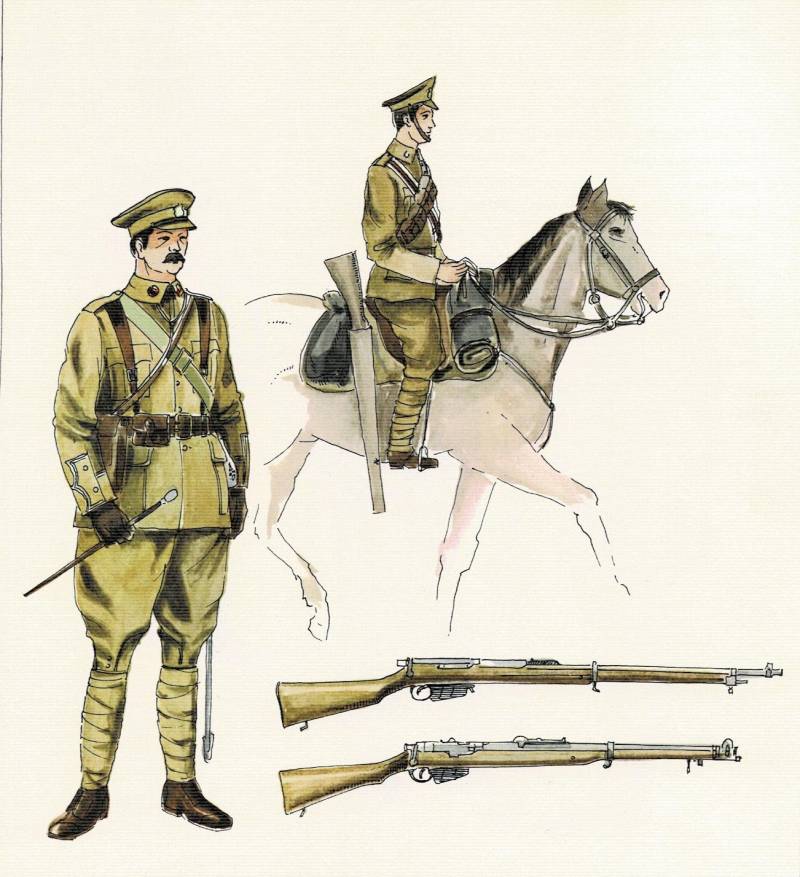 British infantry officer circa 1906, British cavalryman circa 1914. Bottom right: Lee-Metford rifle (top) and Lee-Enfield (bottom). Drawing from the book Foster G., Hoch P., Muller R. "Uniformen europaischer Armeen" VEB, Berlin, 1978. P. 255
For the war with the Boers, the yeomanry system was activated again. Of the 10 men available, 000 were sent to South Africa as a battalion of imperial yeomanry, equipped and organized as a unit of mounted riflemen. By the end of the war, 3000 men had passed through the yeomanry training system, most of whom were sent to the front. From 32, the organization of the yeomanry units was standardized: each regiment had four squadrons. 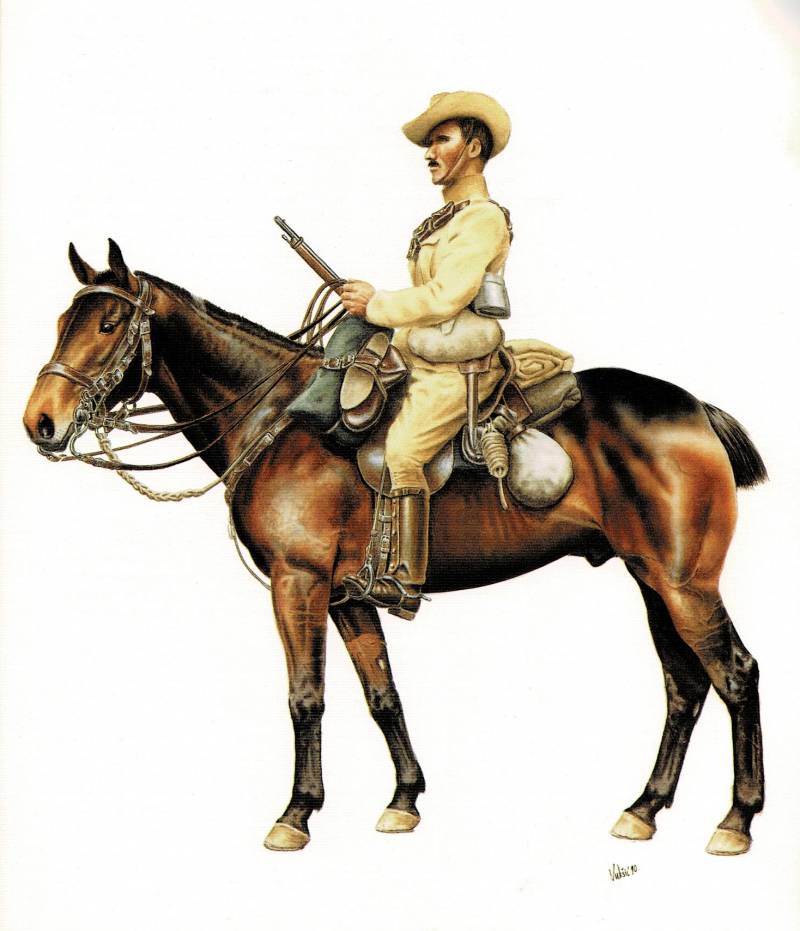 British yeomanry 1900 dressed in khaki. Illustration from the book Cavalry. The history of fighting elite 650BC - AD1914" Vuksic, V., Grbasic, Z. P.223
In the same 1901, the khaki military uniform was adopted for all branches of the military. Leggings worn since 1859 were replaced in 1900 with gaiters. The military cap has become part of the military uniform of soldiers and officers since 1905. Regimental insignia found their place on the collar and above the visor of the cap. The rank of officers was indicated on the lapels and on the galloons around the lapels. The field uniform of the cavalry differed from the infantry only in regimental insignia. Cartridges were carried in bandoliers. 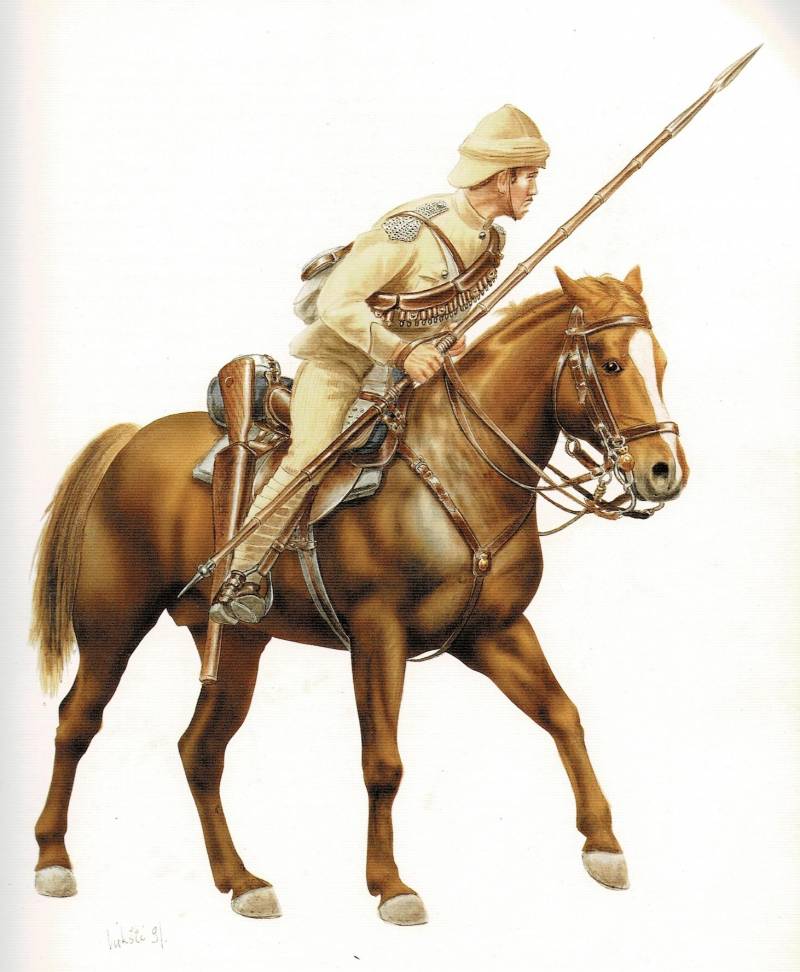 Private of the 21st British Lancers in khaki uniform, 1898. This is what the cavalrymen of this regiment looked like when they fought the Mahdists at the Battle of Omdurman. Illustration from the book Cavalry. The history of fighting elite 650BC - AD1914" Vuksic, V., Grbasic, Z. P.223
Serious opponents of the British in southern Africa were the Boers, who were descendants of Dutch colonists who moved to South Africa after the Dutch East India Company established its first trading post at the Cape of Good Hope in 1652. By the end of the XNUMXth century, many families from Holland and Germany arrived here. Later, the Huguenots expelled from France were added to them, who mixed with the mass of the Dutch who already lived here. The natives - Bushmen and Hottentots - were used by the colonists as slave labor.

Until 1795, all power in southern Africa belonged to the Dutch East India Company, but then the colonists proclaimed self-government and ceased to obey anyone. In 1806, the cape was captured by Great Britain. The Boers did not like the new regime: English became the only official language, the British deprived them of all leadership positions, and the Slavery Abolition Act of 1833 also deprived them of their labor force. So they migrated north and east where they founded the Orange Free State, Natal and the Transvaal. However, this resettlement did not free them from British intervention, since all the conquests of British subjects belonged to ... the British crown. However, the Boers were determined to resist British expansion, which resulted in the Anglo-Boer War of 1899-1902. 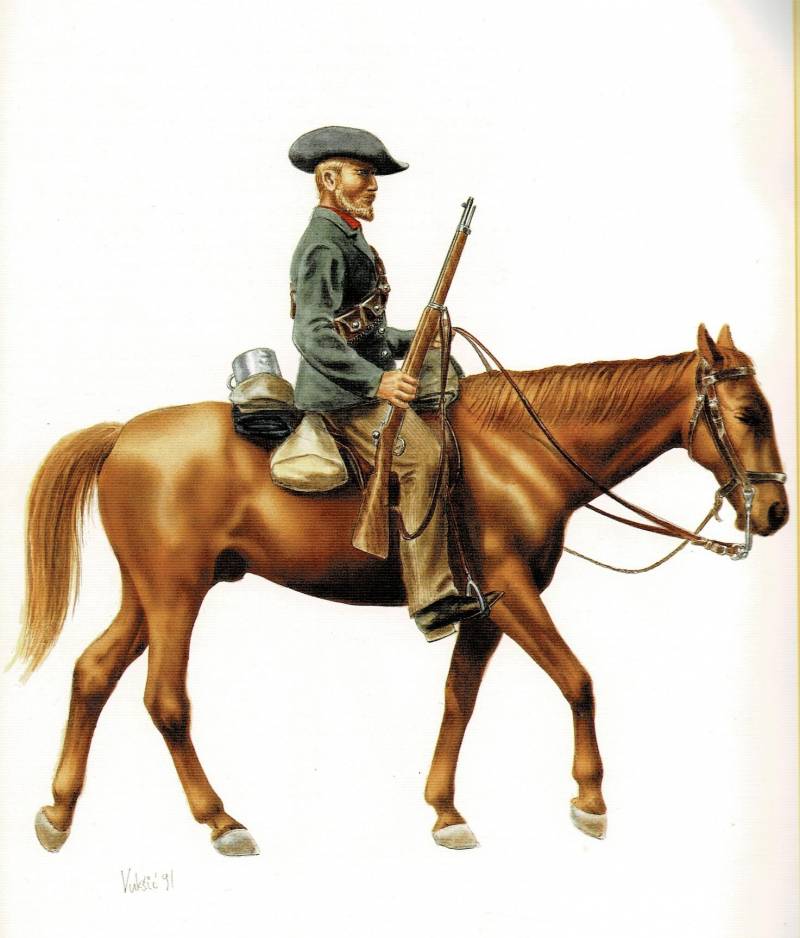 The Boers did not have a uniform, but being dressed in clothes made of homespun fabric dyed with natural dyes, they blended into the terrain, as if they were wearing a khaki uniform. Commando drill 1900. Illustration from the book “Cavalry. The history of fighting elite 650BC - AD1914" Vuksic, V., Grbasic, Z. P.221
The Boer Republics had an undisciplined but well-armed militia force of about 47 men aged between 000 and 16. After the announcement of mobilization, they gathered in the regional centers and formed detachments called commandos. Each such detachment of about 60 people was led by a commandant and several cornets, who in turn commanded cornets of about 200 people. In practice, there were units of 30 to 100 men. Officers were chosen by vote; if they proved incapable, they were immediately re-elected. Each militia had one or more horses, so commandos were a sort of mounted infantry, as were units of the British yeomanry, as were the Boers, who had no sabers. Foreigners and natives were not accepted into the armed forces. 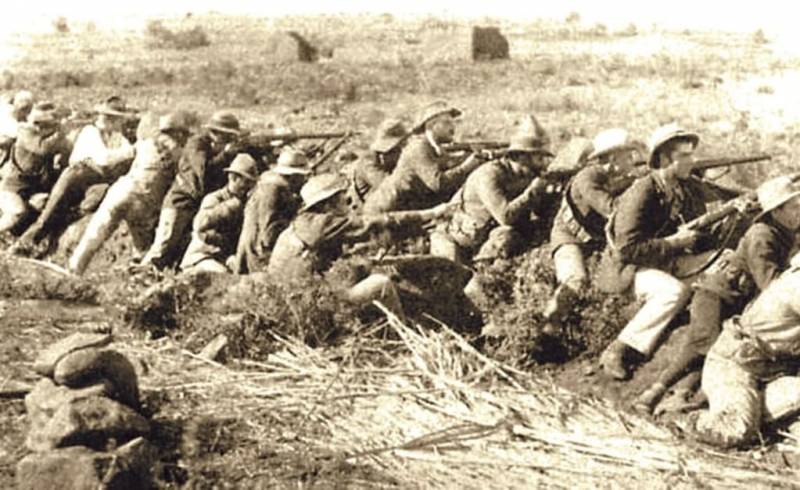 Boer Fusiliers in infantry line
It was said that the Boer boys were not given dinner if they did not hit the target with the first shot. Therefore, these people were excellent riders and shooters. Both men and horses were accustomed to the South African climate, in contrast to the soldiers brought from Britain, who went through a painful period of adaptation.

At the start of the war, the Boers inflicted several serious defeats on the British - at Stormberg, Magersfontein and Colenso in 1899 and at Spion Kop in 1900. Guerrilla tactics destroyed British communications and forced them to erect a line of small forts to block the movement of the Boers. The later occasional successes of the Boers could no longer prevent the British from systematically isolating their units and destroying them one by one, which allowed them to decide the outcome of the war in their favor.