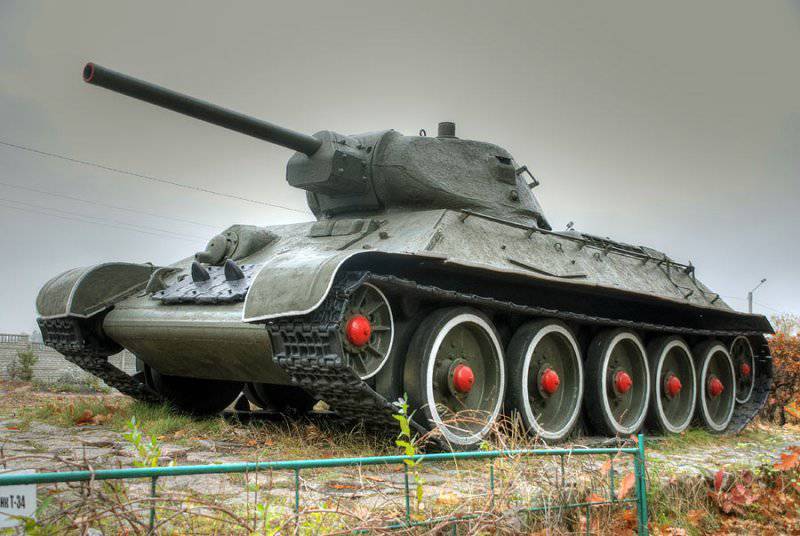 Today marks 70 years since the serial production of the famous tanks T-34. In 1942, more than 250 vehicles went out of the gates of Uralmash to the war. Some of the “thirty-fours” of those years are still on the move and are able to show why Mikhail Koshkin’s invention was recognized as the best tank of the Second World War.

37 year The leadership of the USSR puts the Kharkov design bureau to design a new tank. The military itself waited for the next wheeled-tracked vehicle from the engineers, but the head of the design bureau, Mikhail Koshkin, presented the model exclusively on the tracked drive, which ultimately showed the best results on the tests and was put into service under the name T-34.

When the Wehrmacht soldiers first met the Thirty-Fours on the battlefield, to put it mildly, they were shocked. The patency of our car was impressive - in places where the German tanks didn’t even think about, the T-34 passed without much difficulty. And the armor of our cars was the best at that time. The Germans even called their 37-mm anti-tank cannon "knock knock knocker" because when its shells hit the T-34, they just knocked on it and bounced off.

But before our 76-millimeter weapon German armor was powerless. In addition, the best tank of the Second World according to many experts, it turns out, was also the most unpretentious - the simplicity of the design allowed the crew to repair it in the field.
After the factory in Stalingrad was out of operation, the production of the T-34 was entrusted to Uralmash. In September, 42 of the first 15 machines rolled off its conveyor.

"The tanks were collected not only by Uralmash workers, but also by future tankers. That is, they immediately knew what kind of car it was made of. Then they ran in these cars, shot guns, and already assembled - as they said then," nodded "- the crews went to the front ", - says the director of the museum stories plant "Uralmash" Sergey Ageev.

There are no more than seven such T-34-76 in the world. Two of them are in the tank museum in Kubinka. For example, this car with the unusual name "Moscow Pioneer" was created with the money collected by children in November 42 year.

"She was raised in 2000 year from the bottom of the Lazava Lake, Velikoluksky District, Pskov Region, from eight meters deep by search engines. When the car was lifted, the remains of the driver were found there. Recently it was possible to establish his last name - this is Sergeant Lukoyanov," says the officer The Central Museum of Armored Weapons and Equipment of the Ministry of Defense of Russia Andrei Chernyaev.

Restored tanks museum staff and volunteers. One car should be collected from several - spare parts are put only original. The technology here is rather referred to as historical monuments. But sometimes this does not prevent these monuments from being thrown out of the hangars "into the fields". And today, the seventy-year-old T-34 is not a clumsy "old man" at all.