Defeat of the Kokand Khanate: Uzun-Agach and Ikan battles

By the beginning of the reign of Alexander II, the Russian government began a more active, offensive policy in Central Asia (Turkestan). This was due to several factors.

First, it became obvious that the problem could not be solved by defense alone (How Russia conquered Central Asia). There are few fortified lines and punitive raids. Yes, and spending more on this than on several operations with a decisive result.

Also, the tsarist government feared that the British would break into Turkestan, who had already tried to conquer Afghanistan, making it their springboard for further expansion to the north.

Given the hostility of England, we could get a more serious problem in the southern strategic direction than the raids of the steppes. The British could transfer to Bukhara, Kokand and Khiva modern weapon, send military instructors and advisers to reorganize and modernize the local armies. In the future, British troops could also appear in Central Asia.

Our diplomats and military realized the great importance of Turkestan for Russia. To the south, the snow-covered Himalayas and the valleys of Hindustan loomed. Two generations of the Turkestan military dreamed of the southern seas.

As a result, the military-strategic interests of the Russian Empire outweighed the protests of the Ministry of Finance.

Secondly, Russia now had the opportunity to pay more attention to the Turkestan direction.

The Eastern (Crimean) War was over. Our European policy was for the time being reduced to a minimum. Petersburg took offense at its Western "partners". The long, bloody and viscous struggle in the Caucasus was also coming to an end.

Thirdly, there was also an economic factor.

The British also celebrated it. Turkestan was an important market for the sale of goods, which would contribute to the development of Russian industry. The region also had prospects as a supplier of important raw materials, in particular, cotton.

As a result, the idea of ​​pacifying the bandit state formations in Turkestan found more and more support in society. It was necessary to bring a developed civilization to Central Asia and solve a wide range of military-political and economic problems.

Fourthly, by this time Russia had defensive lines and strongholds advanced forward, which could also become offensive footholds: from the side of Orenburg - Perovsk (now Kyzylorda), and from the side of Siberia - Verny (now Alma-Ata) laid down in 1854 . 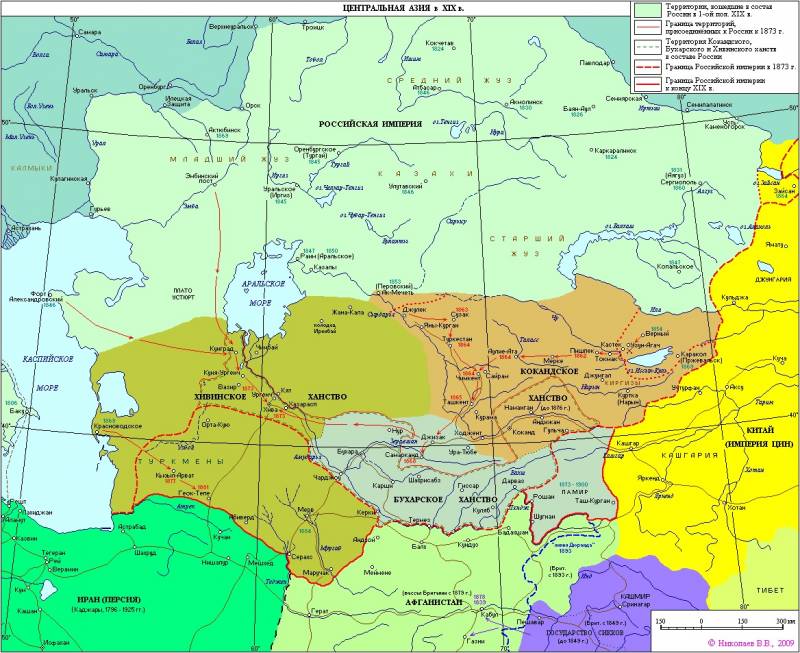 Between Perovsk and Verny there was a huge gap 900 miles wide, where the Kokand horsemen could pass. The Kokand people relied on the line of fortresses: Azrek, Chimkent, Aulie-Ata, Pishkek and Tokmak.

It was necessary to close this gap and protect the Kazakh and Kyrgyz tribes, subject to Russia, from Kokand influence. The main task was to connect the Syrdarya (development of the Orenburg) and Siberian fortified lines.

These forces were located on a huge front with a total length of over 3 miles. The connection of the two lines was delayed by the arrangement of our "Kyrgyz", and then by the liquidation of the consequences of the attacks of the Kokand detachments on the Siberian line.

In 1860, the commander of the troops in the Trans-Ili Territory, Colonel Apollon Zimmerman, at the head of a small detachment, destroyed the Kokand fortresses Pishkek (now Bishkek) and Tokmak.

The Kokandians declared a holy war and gathered a 22-strong army to destroy Verny, raise the entire steppe against the Russians and defeat the Russian villages in Semirechye.

The situation was dangerous.

The head of the Alatau district and the Kazakhs of the Great Horde (Big Zhuz) was Lieutenant Colonel Gerasim Kolpakovsky, who had experience in fighting the highlanders of the Caucasus and a participant in the Hungarian campaign. He was able to gather about 2 thousand people in Verny.

The lieutenant colonel did not wait for the arrival of the enemy hordes and decided to go towards the Kokand army himself.

With a small detachment - about 1 thousand Cossacks and Kazakhs with 8 guns, he moved to the enemy.

On October 21, 1860, the Russians met the enemy on the Kara-Kastek River (near Uzun-Agach). In a three-day battle, Kolpakovsky utterly defeated the Kokand and organized the pursuit of the enemy. The loss of our troops - 33 people, Kokand - 1. 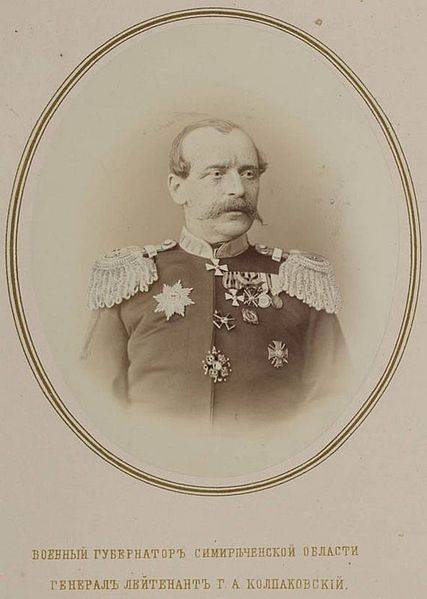 Military Governor of the Semirechensk Region, Lieutenant-General G. A. Kolpakovsky
For the victory near Uzun-Agach, Kolpakovsky was promoted to colonel and awarded the Order of St. George, 4th degree.

In 1862, the colonel made a raid and again destroyed Tokmak and Pishkek, took Merke. Thus, the Siberian line was secured from enemy attacks.

Russia stood firmly in Semirechye and went in this direction to the Chinese borders.

For these successes, Kolpakovsky was promoted to major general.

It is worth noting that these successes of Russia during the war with Kokand (1850–1868) were partly due to internal unrest in the khanate.

There was a long and continuous struggle between the khan and members of the ruling dynasty, specific rulers, nomadic and agricultural nobility, Sarts (sedentary, commercial and agricultural population, Uzbeks and Tajiks), Fergana Kipchaks and Kirghiz.

The struggle was extremely fierce and bloody, with acts of genocide.

Khudoyar Khan (reigned three times in 1845-1858, 1862-1863 and 1865-1875) was distinguished by cruelty and greed, his unjust policy caused popular hatred and constant rebellions and uprisings of the nobility. 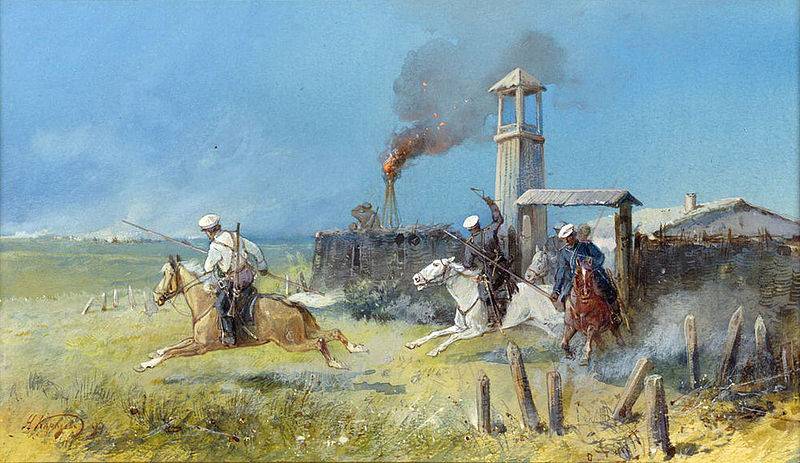 Anxiety in the fortress redoubt (Attack of the Kokand people on the Cossack settlement of Uzun-Agach). Artist N. N. Karazin

The Russian command decided to complete the task of connecting our two fortified lines and possessions.

In the spring of 1864, two detachments came out towards each other: from Verny - Colonel Mikhail Chernyaev (1 soldiers with 500 guns), a participant in the Hungarian, Danube and Crimean campaigns, from Perovsk - Colonel Nikolai Verevkin (4 people and 120 guns).

Meanwhile, Verevkin took the fortress of Turkestan on July 12 and sent a flying detachment to communicate with Chernyaev.

Both Russian detachments, united, came under the overall command of Chernyaev, who was promoted to major general.

On September 22, Chernyaev led troops to storm Chimkent, which was considered impregnable.

In the fortress there was a 10-strong Kokand garrison under the command of Alimkul.

The Russians were able to penetrate the fortress through the water supply, the Kokand people, amazed by the sudden appearance of the enemy inside the city, were demoralized and fled or surrendered. 4 banners, 31 cannons, and many other weapons were captured. Our losses are 47 people. 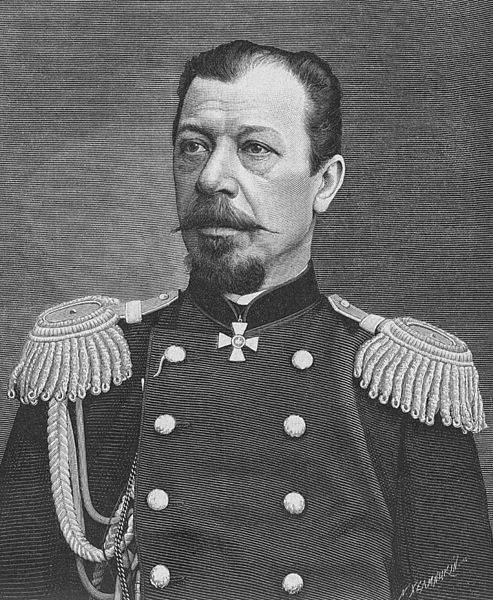 The first assault on Tashkent

Tashkent was the largest trade center in the region, the largest city of the Kokand Khanate, the most important communications hub that connected Central Asia with Russia and the eastern part of Turkestan. With a population of 100 and a garrison of 15. Strong walls and towers 24 miles long, 50-60 cannons.

Chernyaev, with 1 soldiers and 500 guns, decided to take Tashkent on the move, until the enemy recovered from the unexpected fall of Chimkent. Also in the city there was a strong pro-Russian party that wanted an end to wars, unrest and the development of trade.

On September 27, 1864, the Russians approached Tashkent and on October 1 they launched an assault. However, the Kokandians stopped the Russian soldiers with strong fire. In this attack, 18 people were killed, including two officers, 60 people were injured, including Lieutenant Colonel Obukh and Lieutenant Reichard, who died of wounds in Shymkent. Chernyaev retreated.

Perked up, the Kokandians decided to attack the Russians themselves.

The de facto ruler of Kokand, Alimkul (regent for the young khan and commander in chief), gathered about 12 soldiers in December 1864 to make a surprise attack on the fortress of Turkestan.

The commandant of Turkestan, Colonel Zhemchuzhnikov, having learned about the appearance of a gang of steppes in the vicinity, sent a hundred Cossacks of the 2nd Ural Regiment with one cannon (unicorn) under the command of Yesaul Vasily Serov to reconnaissance.

The Cossacks learned that the enemy was located in the village of Ikan (20 miles from Turkestan), but they had no information about his numbers.

On December 4 (16), 1864, near Ikan, the Cossacks clashed with the main forces of the Kokand people. The Russians entrenched themselves in the nearest ditch, covering themselves with food bags (then they used them to cover the dead horses). With rifle volleys and buckshot, they repulsed several attacks of enemy cavalry. Having suffered heavy losses, the Kokandans went over to the siege.

For three days, the Urals held a circular defense. The furious resistance of the Russians stunned the steppes.

The Kokandians fired at the position of the Urals, killed the horses. The Urals with well-aimed shots shot their horsemen, who tried to show off in front of them, knocked out representatives of the nobility, who stood out for the wealth of clothes and weapons.

Alimkul ordered to prepare brushwood shields in order to get closer and use the multiple numerical advantage.

In Turkestan, they realized from the shots that the Cossacks were fighting an unequal battle and sent reinforcements. But the garrison was small - 2,5 companies. Therefore, the rifle company of Lieutenant Sukorko could not break through to his own, not reaching the Cossacks for about three versts, and with difficulty made their way into the city (it took two days).

Alimkul offered Serov to surrender and convert to Islam. The Kokand people gladly accepted fugitive or captured Russians, they were excellent military specialists.

The Cossacks responded with gunfire. 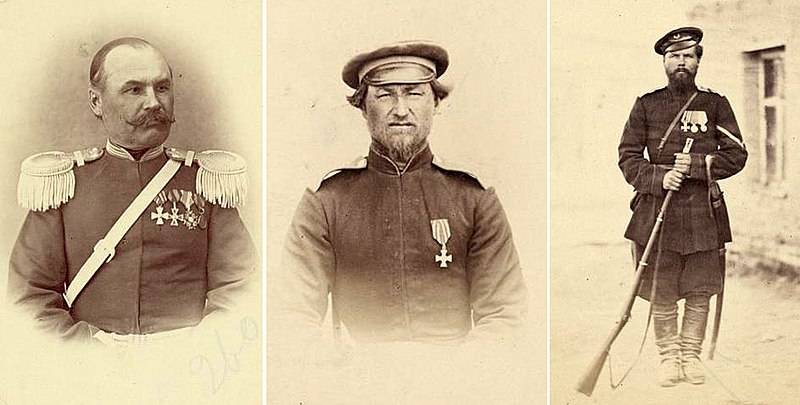 V. R. Serov in the rank of colonel and his Cossacks, awarded for the battle near Ikan. Photo 1872–1879
Serov sent two Cossacks to the fortress - Borisov, Chernyaev and Kirghiz Akhmet.

On the morning of 6 (18) December, the Kokandians resumed their offensive, the Cossacks repulsed several attacks. A hundred suffered heavy losses, almost all were wounded. All horses are killed. The last hope was a breakthrough to the city, from where help could come.

The Urals got up in a square, went for a breakthrough and made their way through the ranks of the Kokand army.

The nomads did not dare to lean on the entire cavalry mass, apparently, they were afraid of new high losses. They preferred to follow and shoot. Dzhigits immediately attacked the fallen Cossack, cut off his head, mocked the seriously wounded.

Therefore, those fighters who felt a close fall asked their own to kill them. But the Urals responded to the last with marksmanship, and the Kokandians, who approached too close, became their victims.

At the end of the day, the remnants of the detachment were saved by the second detachment, expelled from Turkestan.

However, their feat was not in vain, they were able to break the offensive impulse of the Kokand people. The Kokand army lost dozens of commanders and hundreds of soldiers (according to other sources, more than 2 thousand soldiers).

Alimkul did not dare to accept the battle with the Russian detachment sent against him and returned home.

All the Ural Cossacks who survived the battle were awarded the Insignia of the Military Order, Serov himself was awarded the Order of St. George, 4th degree. 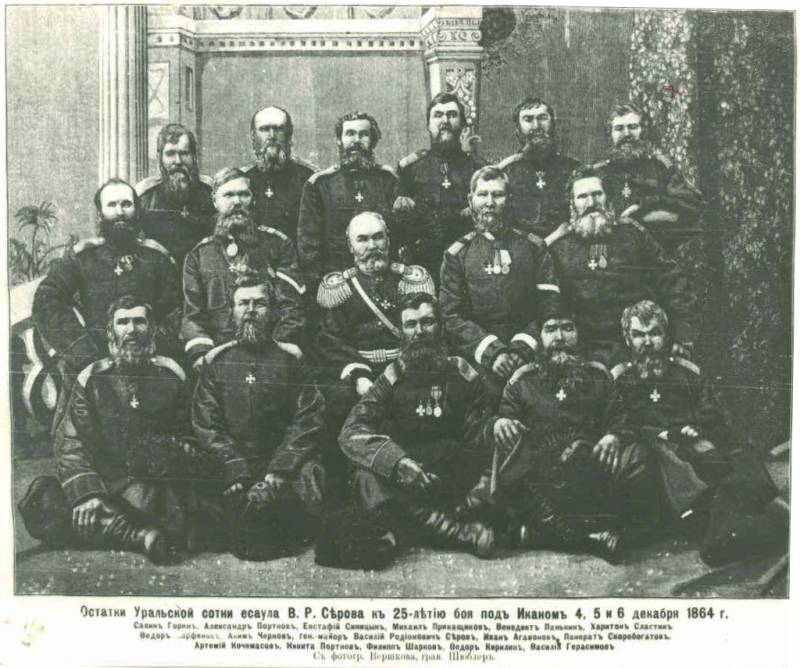 Participants of the Ikan battle 25 years later. “Praise to you, Icanians, and honor to you by right! You are right in front of duty and the Russian Tsar, And bringing glory to the banner of the troops, You gave much to the descendants in return. N. V. Savichev, "To the Heroes of Ikan".