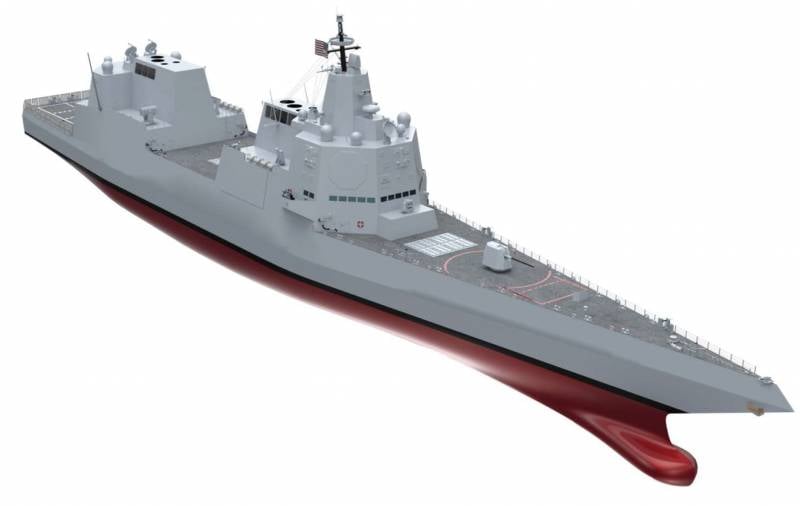 In the early thirties, the US Navy plans to receive the lead destroyer of a new project, known as DDG (X). In the near future, the full development of this project will begin, but for now the fleet is developing requirements and determining the general appearance of the ship. A new version of the concept project, showing the main wishes and how to fulfill them, was shown a few days ago.

On January 11-13, the 34th National Symposium of the Surface Water fleet (Surface Navy Association). During this event, various issues of the further development of the surface forces of the US Navy were considered, incl. promising projects of ships and vessels. In particular, the head of this program, Captain David Hart, made a report on the future destroyer DDG (X).

The program manager noted that the promising destroyer is intended to replace existing and planned ships of the Arleigh Burke type. According to current plans, the latter will be built at least until the end of the twenties, and their operation will last until the sixties. However, at the beginning of the next decade, the Berks will begin to supplement the promising DDG (X) destroyers.

For all its advantages, the destroyer Arleigh Burke is not without flaws. This ship, as a surface platform, has limited volume and carrying capacity for the installation of new equipment or weapons. In addition, there are power supply restrictions. All this makes it difficult to carry out new upgrades to obtain all the desired features and create a significant reserve for the future. 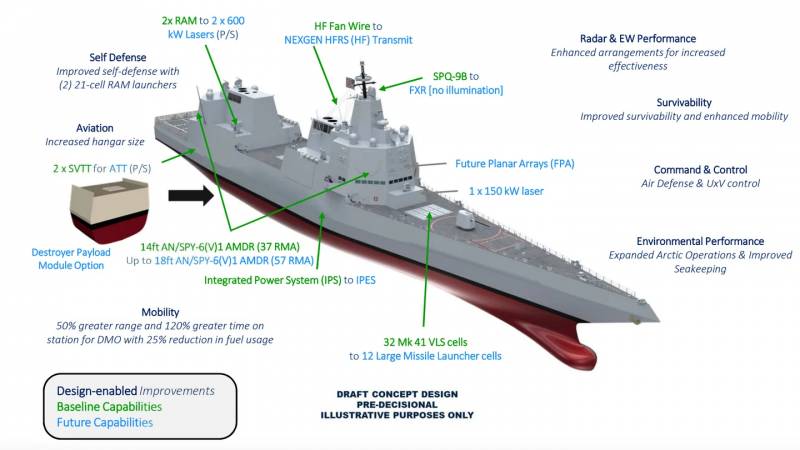 Destroyer DDG(X) and its equipment
It is assumed that the DDG (X) will be an evolutionary development of the existing Arleigh Burke ships. It will take into account all the shortcomings of its predecessors, as well as use well-mastered ideas and the required number of new solutions. The revolutionary approach with the massive introduction of new ideas and components was prudently rejected, remembering the results of the failed Zumwalt project.

In the course of such an evolution, it is proposed to create a surface platform with the necessary characteristics and a margin for modernization. It will initially be equipped with existing and new components, assemblies and samples. In the future, as needed and the appearance of promising products, modernization of various scales will be carried out.

Another proposal aimed at simplifying the project will be implemented as part of development work. The maximum testing of components and assemblies is planned to be carried out on ground stands. Marine carriers will receive the most developed and ready-made equipment, which no longer requires complex and lengthy fine-tuning.

Before the end of the current financial year, the Navy is going to start developing a preliminary draft DDG (X). Over the next few years, the final version of the project will be created, according to which the first ships of the series will be built. The contract for the lead destroyer is scheduled for FY2028. Shortly after its signing, the bookmark will take place. It will take several years to build, and in the early thirties it will become part of the Navy.

Plans for the next ships of the series are still unknown. In addition, it is not specified when the modernization of destroyers will begin with the replacement of electronic and missile weapons, the installation of lasers, etc. Perhaps these questions will be resolved only by the mid-thirties or later. 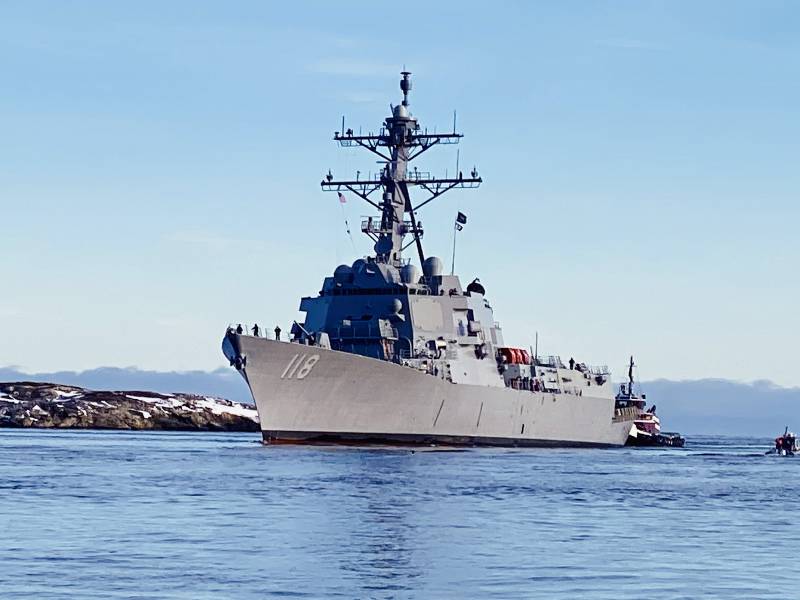 USS Daniel Inouye (DDG-118) is one of the last Arleigh Burke-class destroyers built.
The volumes of the planned series and the timing of its construction have not yet been called. Perhaps the Navy does not yet have such plans and is still dealing with more pressing issues.

In the report on the topic DDG (X) all the main features of the future ship were sounded. Also, specific samples of equipment and opportunities offered for use in the basic version of the project and in its further development are named. In addition, they showed a hypothetical image of the destroyer.

Outwardly, the concept is vaguely similar to modern American ships, although there are also characteristic differences. A hull with an elongated expanding nose, a traditional stem and sides without open openings was used. The construction of two superstructures is envisaged. One will traditionally accommodate the bridge and the necessary electronic equipment, and the other will house a hangar for a helicopter. A significant part of the systems and assemblies are planned to fit inside the case.

New requirements of the SWAP-C type (Size, Weight, Power, Cost) were presented to the project, associated with the need to create a reserve of characteristics for further upgrades. The ship must have compartments for the installation of all necessary products and a margin of 5% by area and 10% by weight. It is necessary to use an integrated power system with a power reserve of 20% over the calculated load. The cooling system should immediately have a power reserve of 20% and the possibility of increasing it up to 40%.

In the DDG (X) project, it is required to reduce the visibility of the ship by two or more times in comparison with the current Berks. You also need to improve performance and increase survivability. The design should take into account the issues of operation at high latitudes. 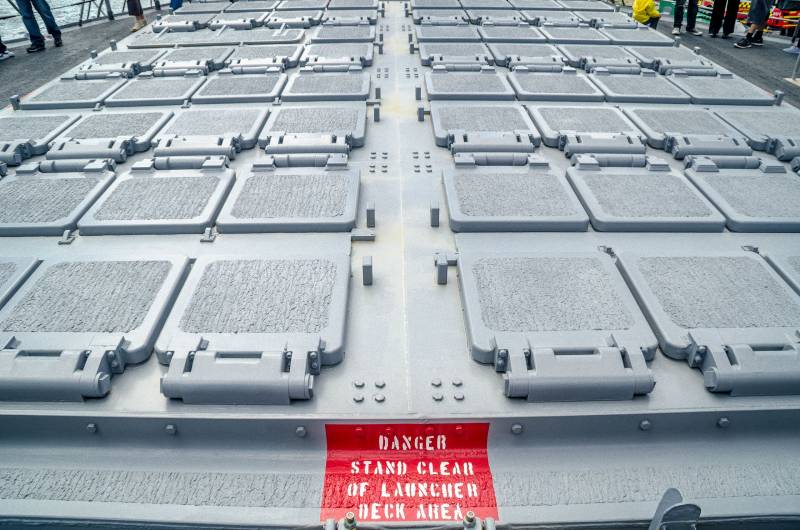 Mk 41 Universal Launcher
It should be possible to change the body with new features. So, in the course of a future upgrade, a Destroyer Payload Module section with additional weapons can be added in the center of the hull.

Due to the new power plant and related systems, it is necessary to improve driving performance. The Navy wants to increase the cruising range by 50% or more (from the original 4400 miles at Arleigh Burke), and the duration of patrols in a given area by 120%. Fuel efficiency should increase by a quarter.

It is curious that in a recent report the desired advantages of the ship over existing models are indicated, but a number of key characteristics are not named. In particular, the dimensions and displacement, the characteristics of the power plant, running parameters, etc. are unknown or not even determined.

The Navy wants to get a multi-purpose ship, similar in basic capabilities to the Arleigh Burke. He must solve the tasks of air defense and anti-submarine defense orders, as well as carry out strikes on various objects. At the same time, it is necessary to ensure the growth of all the main characteristics in comparison with today's ships.

It is planned to make the AN / SPY-6 (V) 1 AMDR multi-purpose radar, the active phased array of which will be located on both add-ons, the main means of review and detection. In the first version of the project, it is proposed to use AFAR 14 feet high, and during modernization, 18-foot ones will be used, with an increased number of transceiver elements. The next step will be the use of a new generation of radar type FPA. The ship will also receive the AN / SPQ-9B surveillance and fire control radar, which will later be replaced by the promising FXR. 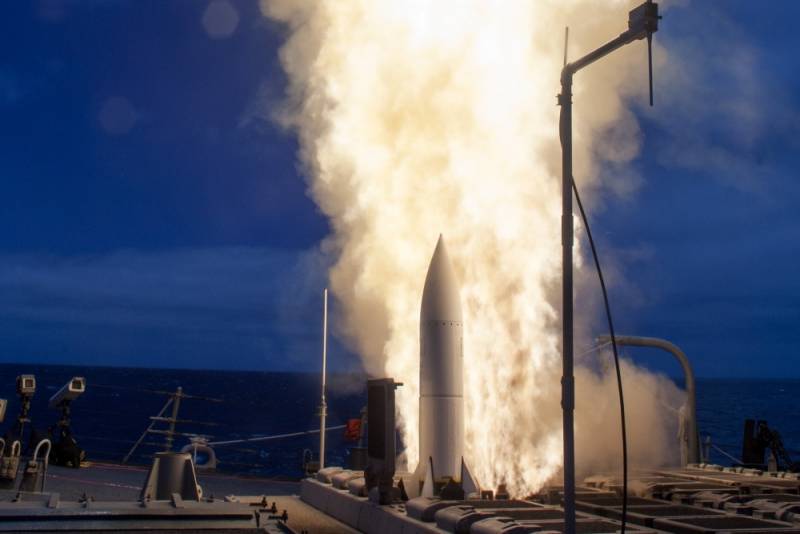 Launch of an SM-6 missile from an Mk 41 mount on an Arleigh Burke-class ship
The DDG(X) concept version carries two Mk 41 launchers with 16 cells each - one on the nose, the second between the superstructures. The number of missiles can be increased by the DPM section with the Mk 41 installation. In addition, a new unified launcher for containers of a larger diameter is expected to appear in the future. In place of the 16-missile Mk 41, it will be possible to place 12 cells of this type.

It is noteworthy that in terms of the number of cells in the launcher, the promising destroyer from the report is seriously inferior to the existing Arleigh Burke ships. At the same time, there is enough space in the hull and on the deck for additional installations. Perhaps the presentation did not begin to reveal the full potential of the design, even in its intended form. Accordingly, real ships will receive more launchers and in this respect will not be inferior to the current pennants.

The ship in the basic configuration will be able to use the entire range of missile weapons compatible with the Mk 41. These can be strike, anti-ship, anti-aircraft and other missiles. A prospective install will keep compatibility with this weapons, and will also be able to use future hypersonic or other missiles.

The defense of the near zone will initially be provided by two anti-aircraft missile systems RIM-116 RAM with 21 missiles each. In the future, they can be supplemented or replaced by promising combat lasers with a power of 600 kW. In addition, they want to introduce a 150-kilowatt laser.

The recently published data on the DDG(X) destroyer project are of great interest. In this case, first of all, it is necessary to pay attention not to the expected increase in characteristics, proposed components, etc., but to the main approaches used in shaping the appearance of the ship. 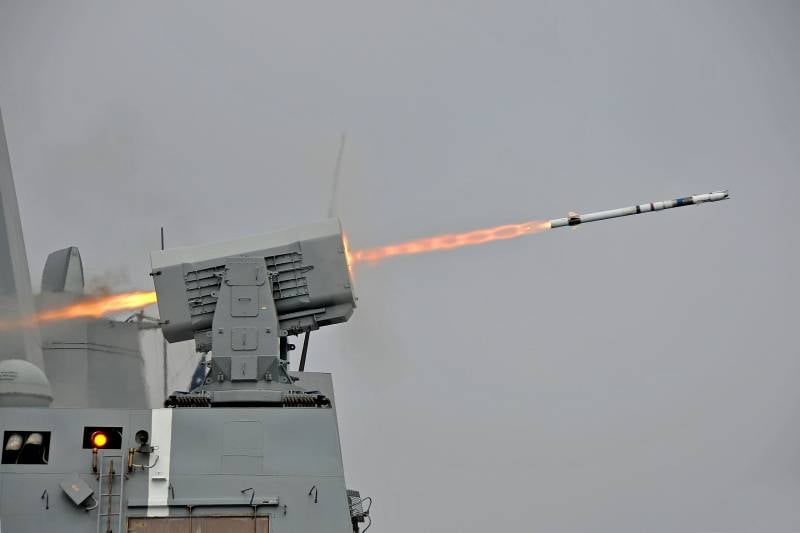 Anti-aircraft missile system RIM-116 RAM
The US Navy has extensive experience building and operating the Arleigh Burke destroyers. In addition, they suffered a resounding and expensive setback with the "revolutionary" Zumwalt project. Based on this experience, it was decided to use an evolutionary approach in the new DDG(X) program, excluding overly complex and bold ideas and solutions.

At the same time, "modesty" in the early stages of the project does not preclude further development with the gradual introduction of more complex samples and ideas. However, the Navy intends to exercise caution in such processes and will not rush if such an acceleration threatens the project and / or shipbuilding program.

The proposed approach looks sensible and, apparently, allows the US Navy to expect to obtain all the desired results - at least in the design and construction of the first version of the destroyer. A recent report shows that the DDG(X) could be a reasonably successful modern ship with broad combat capabilities. And in the future, it is possible to carry out the desired upgrades with clear consequences.

In general, the DDG (X) project in its current form of a preliminary concept gives the Pentagon certain reasons for optimism and allows you to make realistic plans for the future. Whether such ships will be able to repeat all the successes of the existing Berks is a big question. However, it can be assumed that they will easily surpass the unsuccessful Zumwalt series and make a real contribution to the development of the fleet. However, the real results of the new project will appear only in 10-12 years, and until then all the tasks will lie on the Arleigh Burke destroyers - with all their advantages and disadvantages.