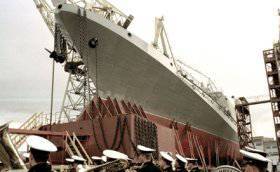 Baltic Shipbuilding Plant (PSZ) Yantar in Kaliningrad starts construction of the fourth of a series of frigates here for the Naval fleet Russia.

As ITAR-TASS correspondent was told today by the plant’s press secretary, Sergei Mikhailov, “the ceremonial laying of the frigate is scheduled for October 12”. The shipbuilders have already made the bottom section to this event, to which the mortgage board of the future frigate will be attached in a solemn atmosphere.

The fourth frigate of this series will bear the name "Admiral Butakov". Gregory Butakov - Russian naval leader, admiral. He served in the Baltic and Black Sea fleets. Participant of the Crimean War 1853-1856 and the defense of Sevastopol (1854-1855). The first of the Russian admirals reorganized the organization and tactics of the naval forces in accordance with the development of the steam fleet.

The Baltic Shipyard Yantar, within the framework of two contracts signed with the Ministry of Defense of the Russian Federation, will construct six frigates of the 11356 project developed by the Northern Design Bureau.

The lead ship of this series is the frigate "Admiral Grigorovich", laid at the 18 plant in December 2010, the second - the "Admiral Essen" - 8 in July 2011, the third - "Admiral Makarov" in February 29. 2014-2016 total shipbuilders "Yantar" should transfer to the fleet six frigates, said the representative of the plant.

The frigate of the 11356 project is designed to conduct combat operations against surface ships and submarines of the enemy in the ocean and sea areas, repelling attacks of air attack weapons, both independently and as part of a ship connection as an escort ship.

Baltic Shipbuilding Plant "Yantar" was formed by 8 July 1945. It specializes in the construction of small and medium tonnage vessels for military and civilian purposes, as well as ship repair works. Over 67 years stories 155 warships and more than 500 civilian ships were built at the plant. At present, the controlling stake in OAO PSZ Yantar is owned by the state represented by OAO United Shipbuilding Corporation.