Cannons of the Penza Fortress 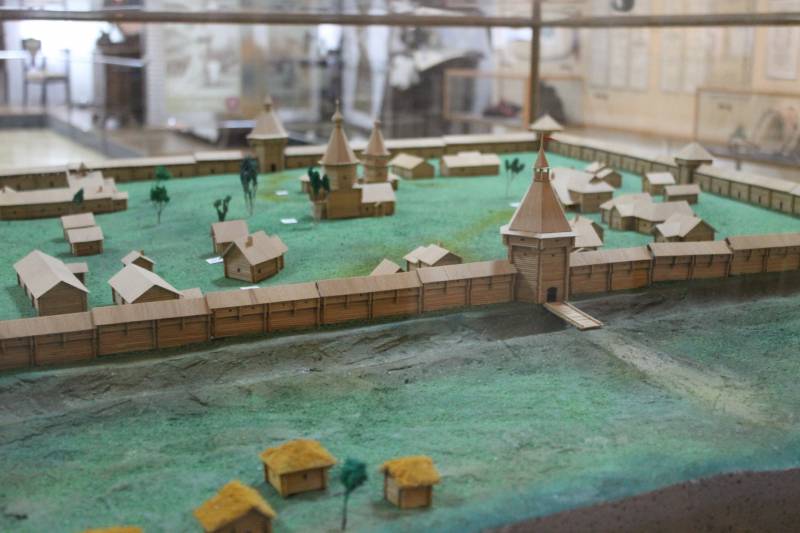 Model of the Penza fortress from the Regional Museum of Local Lore. Author's photo

We live in fortification
We eat bread and drink water;
And how fierce enemies
They will come to us for pies,
Let's ask the guests a revel:
We load the buckshot gun.
"The Captain's Daughter" A.S. Pushkin
History our homeland. And it happened that a few years ago, after the publication of one of my articles about foreign castles, they wrote that all this, of course, is good, but why don’t you write about our fortresses. About your same Penza. You probably won't be able to do it... And here - yes, there really is a problem. And it is difficult to write about those places where you yourself have not been, but the worst thing is to illustrate such articles. More text information can be found. You can also rewrite the text through the Anti-Plagiarism system with a novelty level of 100%, so that the author of the original text himself will not recognize it. But what about photographs? The fact that they are full of them on the Internet does not really mean anything. We only need photos “public domain”, that is, those in public use, and there are only one or two such photos, and it is very long and difficult to search for the authors of each photo. Therefore, it is easier not to write than to write. It turned out even worse with my Penza. My wife, who then worked at the Penza Museum of Local Lore, wrote the article “The Fiery Battle of the Penza Fortress” back in 1984 and published it in our regional newspaper. However, time passed, the materials were simply lost, so it was impossible to take and write from memory like that. But... finally managed to get into the regional archive, squeeze into the line of grandmothers and young people (!), busy looking for their own and others (!!!) genealogies, and find this newspaper and this article. Well, go to the museum and take photographs that could illustrate it. These are definitely copyrighted and there can be no claims to them.

Another view of the layout of the fortress. Author's photo
Today, the place where the wooden fortress of Penza once stood is being ennobled right before our eyes. In addition to the reconstruction of the old government house, a walking path was built over the former rampart, from which you can see both the monument to the first settler and the riverside part of the city, while today a beautiful square has been laid out on the site of the fortress itself and a monumental cathedral has been built. But it is clear that once a pine forest roared here, and it was from it that the first log fortress was built, which was built here over the river in 1663.

Moreover, it was precisely the fortress that guarded the southern borders of the Moscow state, and therefore it was saturated with military people. Evidence has been preserved of sending 100 swords to the Sura River, where the voivode Yuri Kontransky was ordered to build a city (it is interesting that they were not sabers, but swords), which indicates that there was an equestrian detachment armed in the Western manner with swords. And it was also indicated to send kindyaks to the ensigns, that is, to the banners, because without ensigns it was by no means impossible! And there were archers in the fortress, foot and horse Cossacks, swan catchers, catching swans on the river lakes to the royal table, watchmen, collars and gunners. And since there were gunners, it is clear that there were guns. But how many were there and what were they like? 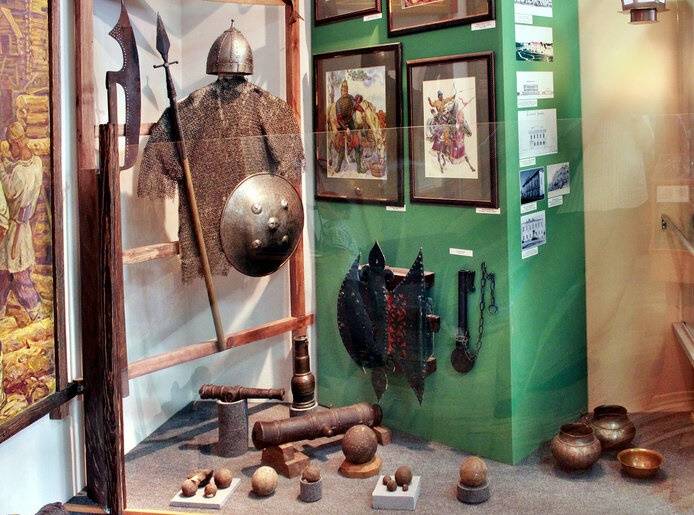 The lock from the fortress gates and the key to them. On the left - the reed of the city archer, a horn, a remake helmet, an oriental copper shield and chain mail of the XNUMXth century, as well as a cannon and cannonballs found during excavations in the city and its environs, and buckshot. Penza. Regional Museum. Author's photo
Let's remember Pushkin's "The Captain's Daughter" and the Belogorsk fortress described there. How many guns were there? One! And yet "it" was called a fortress! But what about Penza?! After all, it was originally supposed to be larger than the Pushkin fortification. 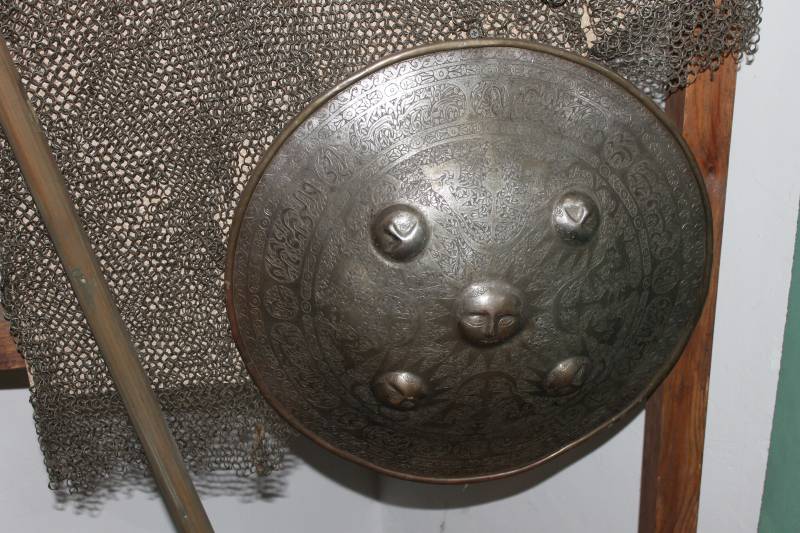 Mail and nomadic (most likely, Iranian in origin) shield. Author's photo
It is known that the Russian cities of the era of Tsar Alexei Mikhailovich were equipped with a large number of artillery pieces, which was reported by many foreigners in their descriptions of Muscovy, who were very surprised at this. So, for example, in 1678, in 150 Russian cities subordinate to the Discharge Order, there were 3575 guns available! Moreover, all the guns differed in purpose and place of installation. So, there were cannons of the "solar battle", located at the "soles" of the walls and towers, and firing through the loopholes, and "mounted" ones - firing from the walls and towers through the parapet. 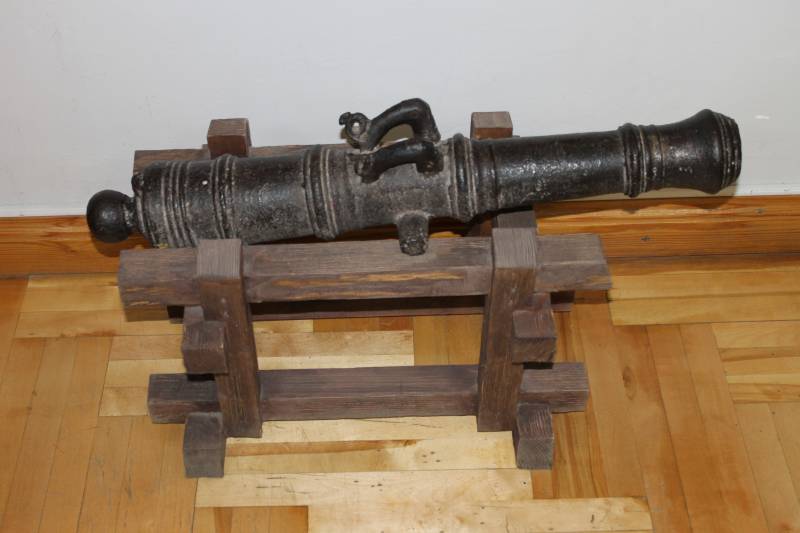 Cast iron cannon with dolphin handles for lifting the barrel. Author's photo
It is good that in the Russian state even then there was a developed bureaucratic system in which literally everything was recorded. For example, the governors had to submit to the Discharge Order all the data about their cities: the “List list” (how much there is in the city) and the “City estimate” (data on walls and towers). From the report of the voivode Ivan Safonov, written by him on June 28, 1701, we know that in Penza in the passing and deaf towers (these stood at the corners) in the upper and lower "battles" in seven towers there were nine cannons, and in two - two guns. Nine cannons were in machine tools (of which four were copper), five wall-mounted iron (that is, cast iron), and two more copper shotguns two arshins long (that is, about 142 cm). In total, therefore, 16 guns. 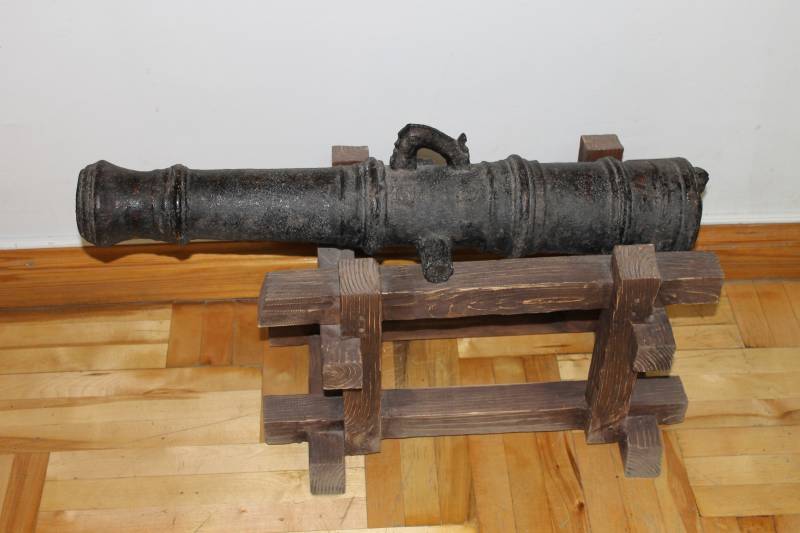 Another one of the same gun. She lost one “dolphin somewhere… Photo by the author
The guns had a large supply of gunpowder, lead (for buckshot) and cast iron cannonballs, as well as fuses for fuses, the inventory of which, again, has been preserved until our time:

Let's estimate the size of the specified ammunition load: 895 cores for 14 guns (excluding shotguns) - it turns out to be somewhere around 63 cores per gun! 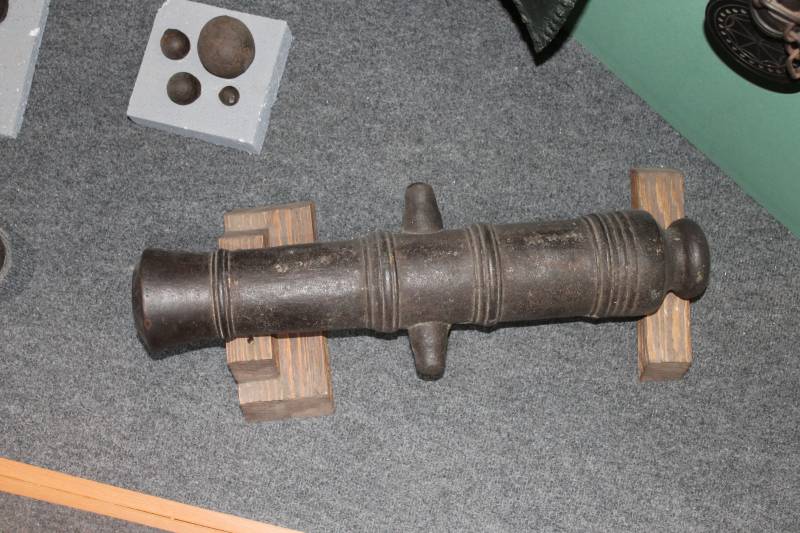 A cast-iron cannon and next to it are a cannonball and grapeshot bullets. Small guns might not have handles. Author's photo
That is, compared with the Pushkin Belogorsk fortress, the fortress city of Penza was more than well armed. The nomads who attacked her never managed to take her. The Penza Regional Museum of Local Lore has an interesting collection of cast-iron cannons of that time and cannonballs of various calibers. They are mostly small in size, and, most likely, such guns were mounted on parapets on the walls. There were also swivel guns, similar to naval ones, which were convenient in that they could be moved from place to place and installed exactly where they were most needed. 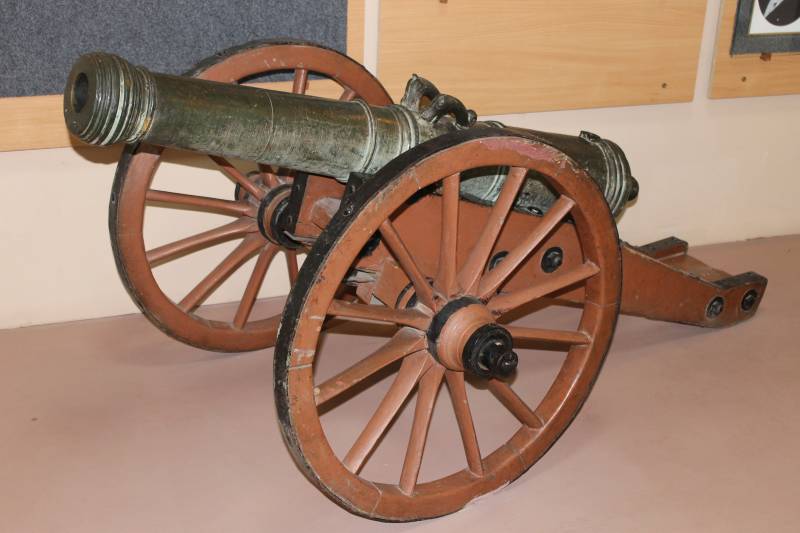 Copper cannon ("from cannon copper") caliber 70 mm from the Penza Regional Museum of Local Lore. Please note that the barrel bore is drilled with a deviation, so it was still necessary to adapt to shoot from such a gun! Most likely, she came to the city and got as defective. Such a gun was not suitable for a ship or an army, but they thought it would do for a suburban fortress! Author's photo
Well, the most serious test that the Penza fortress has ever been subjected to precisely as a fortress was the Kuban pogrom that broke out in 1717, that is, a few years after the return of Azov to the Turks after the unsuccessful Prut campaign of 1711. Until this year, the steppes did not particularly bother the southern borders. But then they began their raids again. A few notch features seemed to serve as a reliable defense against attacks. But, as you know, the Prut campaign ended in failure for Russia, and the "southerners" immediately grew bolder. And this pogrom turned out to be unexpected and, because of this, the most terrible to which the lands of the Penza province were subjected. The Kuban came in early August through the Uzinsky camp of the Penza district, that is, through the part of the Saratov province adjacent to Penza, breaking through the security cordon. Their main forces fell on Penza, and relatively small detachments scattered throughout the Penza district. The alarm sounded in the fortress. The inhabitants of the surrounding villages and the township rushed to save themselves behind its walls. The Kubans approached the fortress on August 3 and besieged it until the 7th, but, as during the pogrom of 1680, they could not take it. They were met with cannon shots, archers and armed villagers stood on the walls, so they did not dare to storm the city. But neither the ramparts nor the notches stopped the Kubans, and they ruined a lot of villages, moving north towards Saransk. True, not all villages were devastated throughout this space: often one or two were destroyed, while the neighboring ones remained untouched. The nomads did not reach Saransk for 30 miles. From the walls of the fortress, people have already seen the glow of burning villages and villages, but then the Kuban turned back. 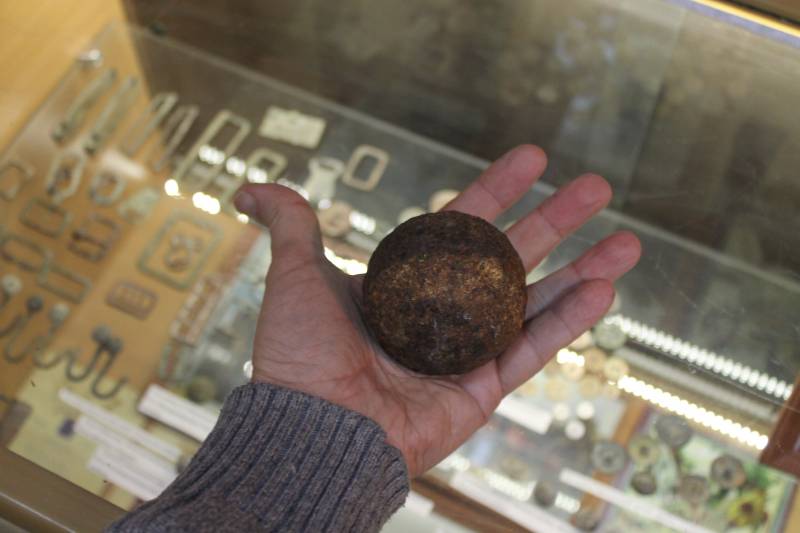 Cannonball caliber 70 mm, found on the territory of the Penza fortress. Museum of the Russian Army. Penza. Author's photo
The Kuban pogrom cost Russia very dearly: 174 people were killed, and 3402 people were driven into captivity. And it's not all losses. As a curious feature of this raid, it should be noted that the Kuban had local Tatars as guides. Documents of the Saransk archive name a number of Tatar villages, whose inhabitants went "to the Kuban". 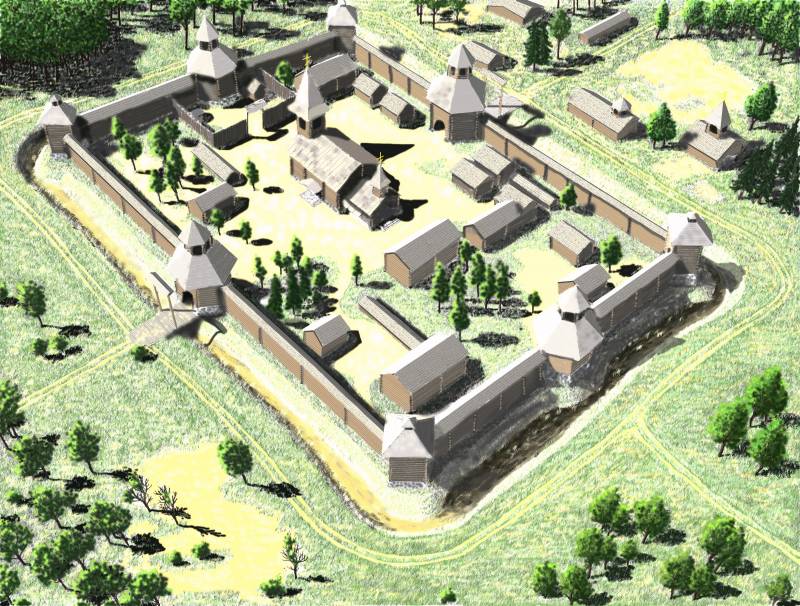 Reconstruction of the fortress Penza. It supposedly looked like this in 1663. The earliest description of the fortress is contained in the inventory made in 1703 by the voivode Prince S.I. Putyatin: "wooden pine, chopped into one quadrangular wall ... Along the walls and on the corner 8 towers, including 2 passers-by, 2 caches with wells ... The measure of the city wall is 113 fathoms in one direction, 103 fathoms in the other direction, in the third direction - 106 sazhens, in the fourth - 109 sazhens. The height of the city wall and with regions 2 sazhens with a half arshin". The total length of all walls was 431 fathoms (931 meters). The log wall crowned a high shaft, which was preceded by a deep ditch, between the ditch and the shaft there was a berm up to 1 sazhen wide, which ensured the stability of the inner wall of the ditch. Inside the fortress, the cathedral church of the All-Merciful Savior and the houses of the cathedral clerks were built, under the church - a powder entrance, then - the voivodship house, the voivodship yard, the guardhouse, food barns, an artillery yard, a shower office, a hut for convicts. Rice. A. Sheps
Despite the devastation of half of the province, the Kuban pogrom did not stop the colonization of the region, and it continued at the same accelerated pace as before. And the government, interested in the development of the region, gave the settlers not only money (“for settlement”), but also ... a squeaker with a supply of gunpowder and lead!