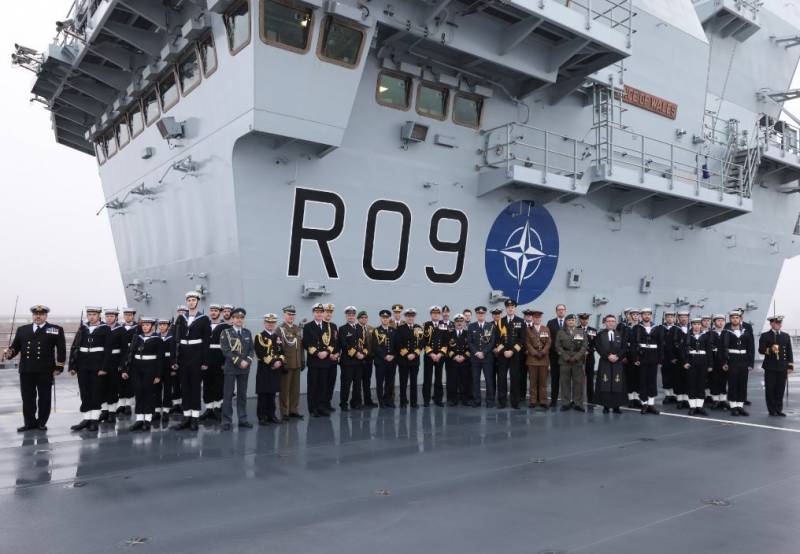 The North Atlantic Alliance's Maritime Rapid Response Task Force was created to eliminate threats and risks in the maritime space that inevitably arise in the course of NATO's activities. The group is alternately commanded by different countries - members of the alliance. This time, the once "mistress of the seas" Great Britain took over from France and is now trying to regain dominance at sea.


The command ship of the group for 2022 was the British aircraft carrier HMS Prince of Wales. The NATO flag was raised on the aircraft carrier as a symbol of the fact that in the coming year the ship will serve as the flagship of the alliance's naval group.

The direct command of the operational forces during 2022 will be carried out by the commander of the strike group of the Royal fleet British Rear Admiral Michael Utley. It is known about him that he has served in the navy since 1990. During this time, Utley managed to be the commander of a patrol ship, frigate, aircraft carrier, aircraft carrier strike group and, finally, all the strike forces of the British fleet. This, according to the British press, is a fairly experienced and competent military officer who has awards for participating in the hostilities in Afghanistan.

As the Rear Admiral noted at the ceremony, NATO is currently the cornerstone of the United Kingdom's defense, so the UK is absolutely loyal and committed to the alliance. He also noted that it is a great honor for him to command the task force for a whole year. The Rear Admiral stressed that the modern Royal Navy of Great Britain is well prepared to participate in any naval operations of the North Atlantic Alliance. In addition, the British Navy noted that the command of the NATO naval task force will make it possible to more successfully achieve the implementation of the "Global Britain" project. This project assumes the growth of Britain's influence in the oceans. For example, it involves the simultaneous use of the 2nd new aircraft carrier strike groups of the United Kingdom away from their own shores.

It is known that the aircraft carrier HMS Prince of Wales will set sail on Wednesday. He is to take part in joint exercises of the North Atlantic Alliance, which will be led by the Norwegian fleet. The Royal Navy of Great Britain noted that this will be the first combat tests of the aircraft carrier since it was declared fully operational. The commander (captain - in NATO terminology) of the aircraft carrier Steve Hiham said that his ship will spend 200 days at sea, operating with other ships of the fleets of NATO countries around the world.