Capsule revolver Davism 1855. Please note that the handle rests against the rear wall of the frame, which makes the revolver look completely different from the American Colts ... Photo www.littlegun.be

"Let it be not the outer braiding of hair, not the golden headdress or the fancy dress, but the innermost man in the imperishable beauty of a meek and silent spirit, which is precious before God," be your adornment.
First Peter 3: 3-4
History firearms weapons. When the word "revolver" is used, most of those who hear it recall either a revolver or a Colt, as if other models simply did not exist. The reason is clear: the mass distribution of both. Moreover, if you ask "who invented the revolver", then in 80% of cases the answer will be the same - "Colt, of course." The fact that in fact a pistol with a drum magazine was first invented and manufactured in Europe, few people (well, except, of course, visitors to our site!) Know. Well, Collier's revolver, from which, most likely, Colt borrowed the idea of ​​such a weapon, is completely unknown in Russia. But ... here again it is a matter of history and traditions. Moreover, Colt created more than just a revolver. It just so happened that he created a whole school, and this is what put his development "at the forefront".

What does it mean? And so: for Europe, neither a pistol nor a revolver have ever been a symbolic weapon. There were enough carbines and rifles, and this kind of "little things", although they were used in the army, were limited. And in everyday life they were used as a weapon in the doors of carriages and nothing more.

It was not so in a young country overseas. There, weapons in everyday life were more important than anywhere else, and it was short-barreled, multiply charged and powerful. And - most importantly, it allows you to shoot both at close range and at a fairly decent distance. But what can I say: in America they hunted bison with a revolver. Could anyone imagine in Europe hunting a bison or a deer with a revolver? 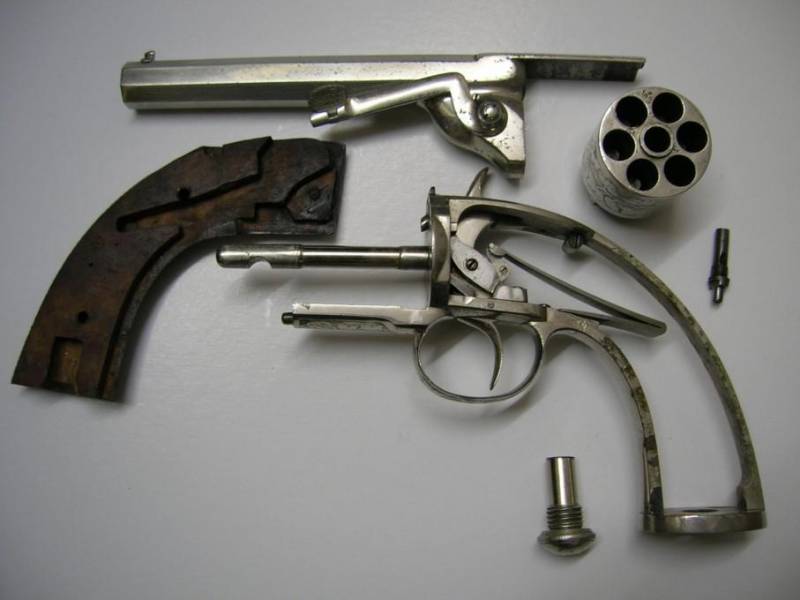 And this is how it looked after being taken apart for details. Photo www.littlegun.be
Therefore, in the United States, they preferred single-action revolvers, so that, with an easy descent, each shot was on target. In Europe, on the contrary, if you took out a revolver, it means ... you are surrounded by villains at the closest distance from them, and here it is not accuracy that is important, but the rate of fire. That is why, as a rule, all European revolvers had a self-cocking mechanism. No one expected to shoot from them far and accurately, but close - why not?

Left view. Photo www.littlegun.be
Further, the Americans for a long time relied on capsule systems with chamber loading, while in Europe very soon the cartridge systems, under the hairpin cartridges of the Lefoshe design, were not very popular in America. Although very interesting capsule revolvers were also created in Europe. And today we will tell you about one such ... 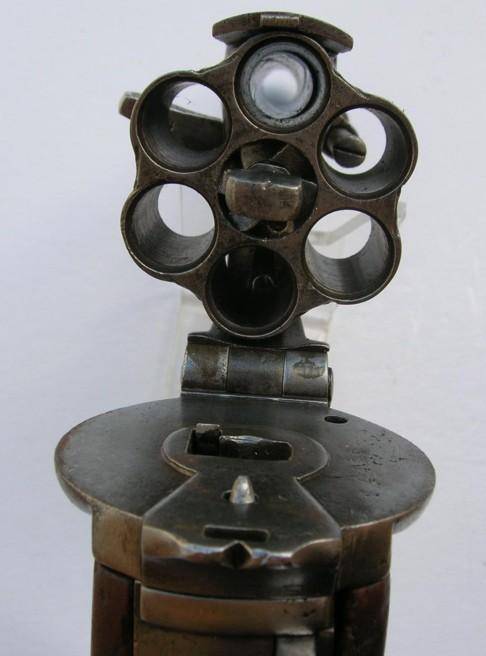 The drum of the 11 mm Davism revolver of 1859. Note its very thin walls. Photo www.littlegun.be
And it so happened that somewhere in 1863, the commander of the Army of Northern Virginia, General Robert Lee, an anonymous donor presented a magnificent saber with an ivory handle and an engraved blade, made by one of the leading European manufacturers of excellent firearms and blades: Parisian Davis Jean-Louis Francois Davism. General Lee kept this saber for special occasions, but in the end he also gave it to Union General Ulysses S. Grant when he surrendered with his troops at Appomattox on April 9, 1865. 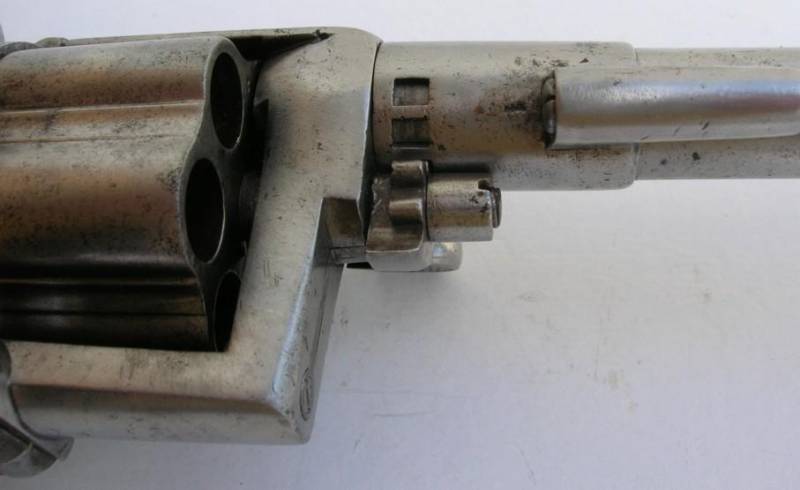 Toothed drive of the cleaning rod-extractor. Photo www.littlegun.be
Another saber made by Davism, the 1822 French cavalry saber, belonged to General Jeb Stewart, and he also made a wonderful .74 caliber sports carbine that fired unique explosive bullets that was used by none other than the President of the Confederation, Jefferson Davis. 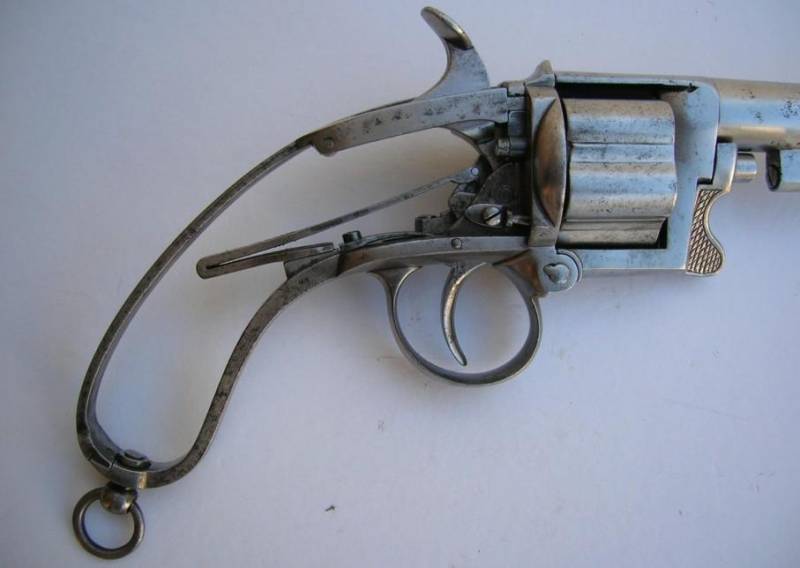 The mechanism of the 11-mm revolver Davism 1859. Photo www.littlegun.be
It is no coincidence that such prominent southern leaders owned Davisma products. His company was well known in Europe for its luxurious dueling pistols and equally luxurious sabers, which were in demand all over the world. The company's products have won numerous awards at many international exhibitions and fairs. 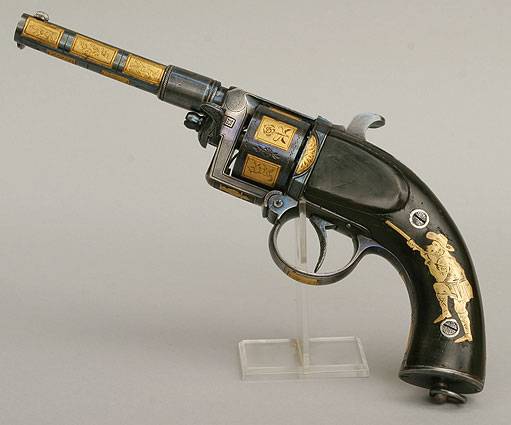 9-mm revolver Davism 1860 Photo www.littlegun.be
Born Louis François-Davism (pronounced De Vem!) In 1806, he began his career as a gunsmith in 1834 when he opened a shop at 36 Boulevard Italia in Paris. He quickly established himself as a supplier of high quality goods, his business flourished, and in a relatively short time he became one of the most famous French manufacturers of the mid-XNUMXth century. Davism's products were appreciated by the aristocracy, the military, and ... the bourgeoisie. 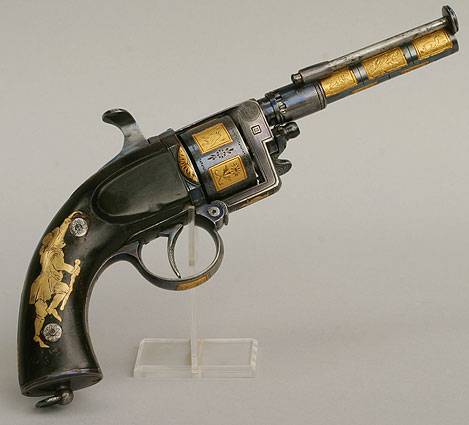 In fact, this is the same revolver of 1855, but only richly decorated! And cartridge! Photo www.littlegun.be
After the Englishman Robert Adams successfully challenged Samuel Colt's monopoly on the revolver trade in Europe in 1851, Davism, who invented the early self-cocking mechanism back in the 1830s, was one of those who produced revolvers of his own design. So, in 1854, he patented a unique six-shot single-action revolver, many of the design features of which differed from the works of both Colt and Adams. 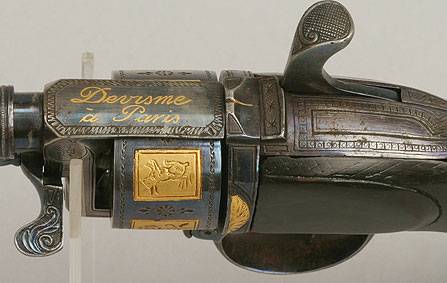 One of the features of this revolver, as well as other revolvers of this master, was the location of the trigger. It was installed off-center, and hit the striker, and that one - on the cartridge primer. Photo www.littlegun.be
An interesting feature, clearly manifested in Davism's revolvers, as in the revolvers of other European gunsmiths, was the location of the barrel and drum. On Colt's revolvers, the sighting line of the barrel in relation to the handle was raised high, while in European ones, on the contrary, it was extremely lowered. As a result, in European revolvers, the drum, in fact, was a continuation of the handle, while the famous Colts had the handle below the drum.

An illustrative example of a "European revolver" can be considered the Davism revolver of 1855. The revolver was 320 mm long, the barrel was 155 mm (with eight right-hand grooves) and weighed 1010 grams. Drum for 10,8 mm ogival bullets. The 1860 model looked about the same. 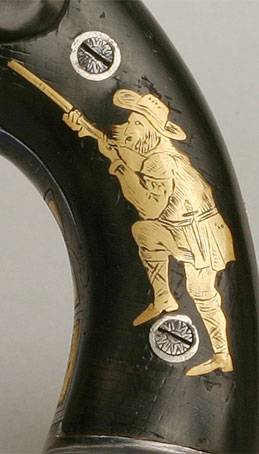 The original design of the handle, isn't it ?! Photo www.littlegun.be
The pistol was extremely elegant and even richly decorated, but it was not suitable for military purposes, because it was very difficult to load. 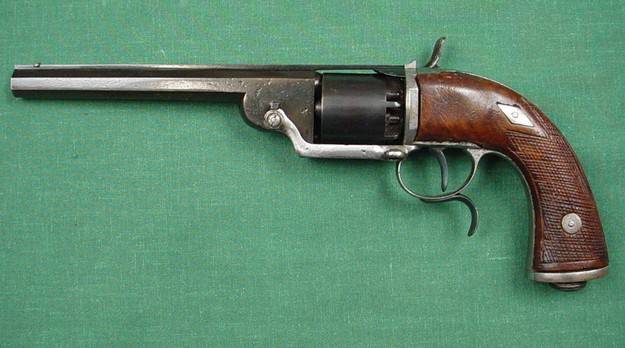 Another Davism capsule revolver. Photo www.littlegun.be
To charge it, it was necessary to remove the drum from it and unscrew the trickle from the handle. Pour gunpowder into chambers and hammer bullets into them with a punch and hammer. After that, from a special oiler with a piston, resembling a medical syringe with its device, the chambers with bullets had to be covered with pre-prepared bacon. The drum was turned over, primers were put on the brand tubes and it was possible to insert the equipped drum into place. Well, the hammer remained to be screwed back into the handle. That is, the Davisma revolver was practically a disposable weapon. And in this he was inferior to the Colt. He, although with difficulty, could be recharged while sitting in the saddle. But with Davism's revolver, such a number would not have worked! 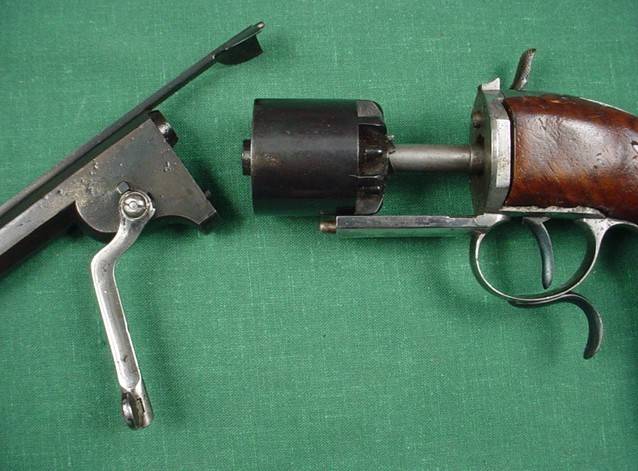 Here, by pressing the lever on the left, it could be disassembled for reloading ... Photo www.littlegun.be
The Davisma revolver of 1859 had a caliber of 11 mm and was already designed for firing unitary cartridges. Despite its impressive dimensions (length 310 mm, barrel 150 mm), the revolver turned out to be quite light - 890 g without cartridges. However, the latter is not surprising. Apparently, it was not designed for firing cartridges with an enhanced charge. The revolver had a hinged frame. The lever in front of the barrel rotated 90 ° and made it possible to swing down the barrel with the drum for loading. The device for extracting spent cartridges was also original. It was attached to a sleeve that rotated freely on the barrel, but with sockets for gear teeth under the barrel. By rotating this gear, it was possible to turn the clutch with a ramrod to the position for ejecting the liner. The drum was locked with a special leaf spring that held it in place during the shot! In addition, it was also fixed in the position for the shot with a special pin, which protruded from the frame of the revolver when the hammer was cocked and held it in the proper position for re-cocking. Thus, when the hammer was cocked, there was no need to fear that a shot from the revolver would not occur due to accidental cranking of the drum. This revolver was used both during the American Civil War and during the Franco-Prussian War of 1870. 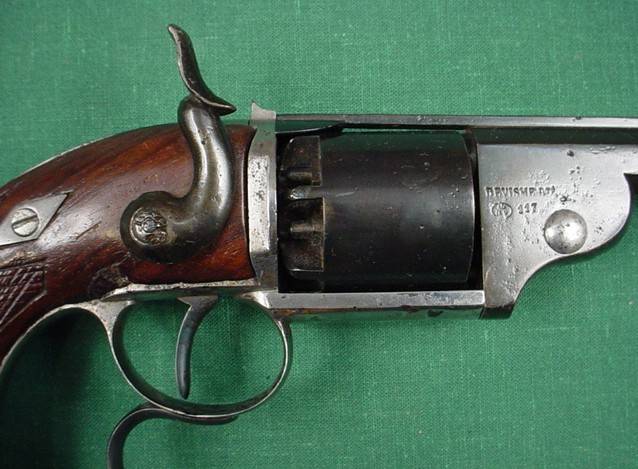 The trigger on the right and does not hit the primers. But they are hit by the firing pin located in the center inside the frame of the revolver. Photo www.littlegun.be
The Davisma revolvers were especially popular with French officers, and a significant number of them also ended up in Mexico during Napoleon III's short adventure. In addition, they were seen in both shock and cartridge versions during the Franco-Prussian War, along with many other types of pistols, including surplus weapons from the American Civil War. 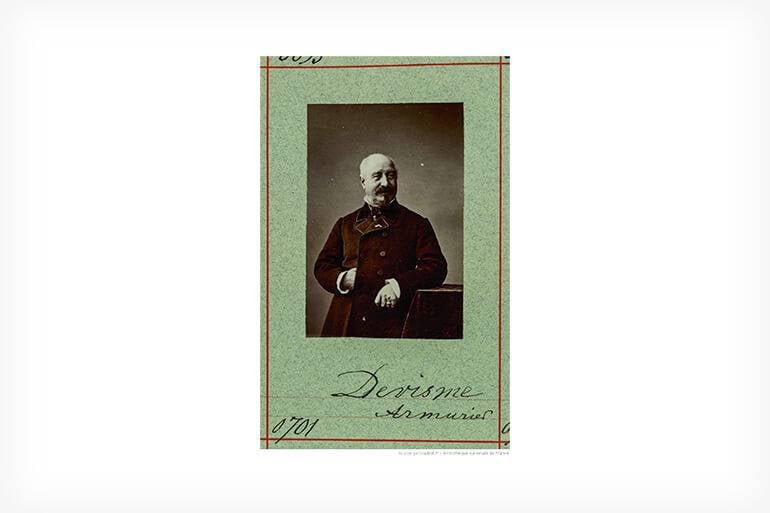 Portrait
P.S. Personally, I do not really like weapons covered with gilding, embossing and carving. A weapon is a thing of utilitarian purpose, it should be beautiful in its functionality. But ... in the days of Davisma, they thought differently. However, lovers of "golden machine guns" and pistols are found even now!