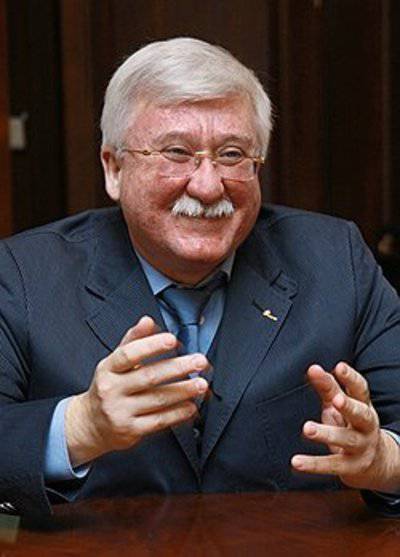 Igor Ashurbeyli, the former Director General of Almaz-Antey GSK OJSC, who was dismissed from this position in February 2011 by a decision of the board of directors representing the interests of the state, recently made a number of statements regarding his plans to go to the military-political leadership of the Russian Federation space defense. He also announced the urgent need to form a "parallel" Concern EKR. Based on the logic of everything said by Mr. Ashurbeyli, it is implied that it is he who ultimately should lead the Aerospace Defense Concern.

Ashurbeyli reinforced his claims to be the main ideologist of the future aerospace defense system of Russia with a reference to the title “Co-Chairman of the EKB’s non-departmental expert council”, although in reality the “Expert Council” is just a non-profit partnership created on the personal initiative of its “Co-Chair” .

Meanwhile, proceeding from the interests of ensuring the national security of the Russian Federation, it seems necessary to carefully, objectively and responsibly analyze a number of "dark spots" in the biography of Igor Ashurbeyli, who for some reason "fell" out of sight of the Russian competent authorities, which took place at the beginning of 1990- s of a difficult stage of formation.

Having started a business activity as a pioneer of Azerbaijani cooperation (after the law “On cooperation in the USSR” initiated by Mikhail Gorbachev in 1988) and establishing the Socium cooperative in Baku, Ashurbeyli appears in Moscow very soon, at the beginning of 90. In a number of newspaper publications it was stated that it was he who in those years headed the Leningrad collective farm market located not far from the Sokol metro station. It is difficult to say whether this was all true or not. The only fact is that in 1991, Igor Ashurbeyli managed to enter into a direct contract with the general director of the Almaz Scientific and Production Association Nikolai Polyashev, which was completely classified in those years. And not just to go out, but to consolidate and develop this contact.

It is noteworthy that the “entry point” by Ashurbeyli to the Almaz Scientific and Production Association was the proposal made to him by Polyashev to take part as a co-founder of the International Information and Telecommunications Exchange (MBIT), which intended to sell commercial information about the industrial potential of Soviet industrial enterprises, and also previously inaccessible databases of, for example, structures such as the Central Institute of Military Technical Information.

Simultaneously with the beginning of the activities of the Moscow Institute of Information Technologies in Moscow, Ashurbeyli established Socium international knowledge systems Inc. in the USA, which becomes the official representative of the Moscow International Information and Telecommunications Exchange. Moreover, Socium International Knowledge Systems Inc., which offers customers a database of enterprises of the Soviet military-industrial complex, opens in California, directly in the famous Silicon Valley - the main US innovation center, where the advanced potential of high-tech clusters of American industry is concentrated.

Considering that counterintelligence support for US firms located in Silicon Valley is one of the most important priorities in the FBI’s activities, there is no doubt that the appearance of Soviet representatives in 1991 in the year - Igor Ashurbeyli himself (if he visited the United States at a specified time) or persons representing his interests, besides offering such a specific “product” as information about the state of enterprises of the USSR military-industrial complex, clearly came to the attention of American intelligence services. Whether Ashurbeyli had contact with representatives of the FBI, and if so, what kind of development this contact received was one of the key questions that needs to be answered.

In turn, Socium international knowledge systems Inc. established three more companies in the USA (one of them - George L. Oliver Company, specialized in the sale of computers and software), and one in Russia - Socium JSC (Moscow).

In a fairly short period of time, the president of the MBIT becomes completely “his” for Nikolai Polyashev, the general director of the NPO Almaz, and he introduces Igor Ashurbeyli into his family. It remains only to guess what these relations were based on. Appeared in the 2009 year on the Internet materials claimed that "I.R. Ashurbeyli organized a number of joint ventures with him, in which the formal participant was N.N. Polyasheva - M.N. Polyashev.

Such a business alliance quickly gave its results. Already in 1994, Ashurbeyli became Deputy General Director of the Almaz NGO. It is not clear who then helped him pass the test and get access to information constituting state secrets, given that at that time his father lived in one of the far abroad countries, and mother did not have Russian citizenship.

It should be noted that a number of sources state that “in the period 1994-1998. I.R. Ashurbeyli created a number of private structures: SociumTorg LLC (originally the company was called Socium Trade Ltd LLP, later it was re-registered into SociumTorg LLC). In 1997, as part of its founders, the American company Global Enterprises LLS (Palo Alto, California) was listed with the 89% package. As at 2009, SociumTorg LLC is a co-founder of Almacenny Business Center LLC, owned by two companies from the UK - Company A + _ Construction Equipment Ltd. and Wold Villas Rile Estate Ltd (UK, London). This indicates commercial the interests of I.R. Ashurbeyli abroad and his relationship with a number of persons who may be motivated by "Western intelligence services" (END QUOTATION).

In 1998, Ashurbeyli became First Deputy General Director of the Almaz Scientific Production Association, and in the same year - a member of the executive committee of the Russian-British Chamber of Commerce (with the first form of admission!). In 2000, he is already the general director of NPO Almaz. This appointment took place, despite the fact that Igor Ashurbeyli’s father resided in the territory of one of the NATO member countries.

In 2006, US citizen Yana Smelyansky appears in the inner circle of Ashurbeyli, who quickly takes key positions as his confidant. As an employee of the Russian-British Chamber of Commerce (London), she also becomes executive director of the military-industrial complex owned by Ashurbeyli. At the same time, LLC “VPK-Construction” in 2008 received a license for the right to carry out work using information constituting a state secret. The “special status” of Yana Smelyansky, surrounded by Ashurbeyli, causes her private trips from Moscow to the United States, the United Kingdom, other foreign countries. What is its true mission, what does it do abroad, with whom does it meet, to whom and what information does it transmit?

Thus, both on the American and British lines, there are sufficient grounds for the Russian Federal Security Service to carry out a full-scale check against Igor Ashurbeyli (including using a polygraph), which should be initiated immediately, with the suspension of his admission to questions constitute a state secret.