Megaprojects of the Soviet Union: a dam across the Bering Strait 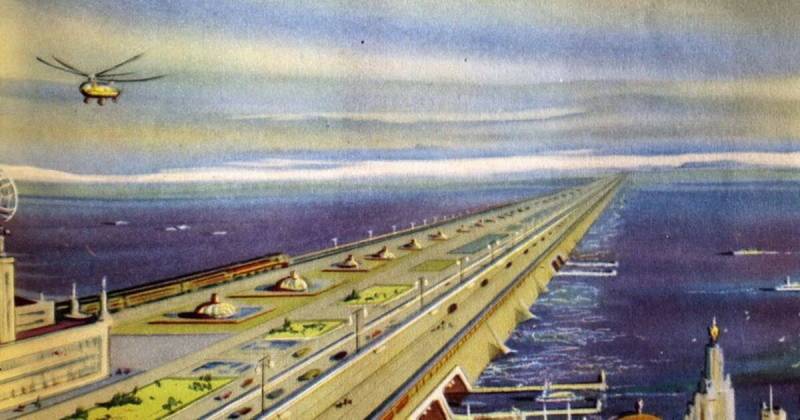 One of the variants of the dam across the Bering Strait.

An idea for 24 billion rubles

Permafrost and extremely low temperatures have always been a big problem for our country. It is expensive and not entirely comfortable to live in Eastern Siberia and the Far East - people at all times reluctantly moved there.

At the same time, maintaining the country's territorial integrity with a low population density is becoming a big problem. Controlling the situation in the north-east of the USSR and Russia has always required large resources.

Now the problem of low temperatures in the giant region of the country is gradually being solved by global warming. Over time, the duration of navigation on the Northern Sea Route increases, winters become milder, and summers are longer.

But in the 60s of the last century, this was still very far away, and individual enthusiasts were ready to act here and now.

One of the brightest converters of nature in the Soviet Union was engineer Pyotr Mikhailovich Borisov, who proposed a dam project across the Bering Strait in the late 50s.

In the Committee for Inventions and Discoveries under the Council of Ministers of the USSR, this idea was registered in 1957 under the name "Radical improvement of the climate of the polar and temperate latitudes of the globe."

In 1970, to popularize the project, the book "Can a Man Change the Climate" was published, which received all the necessary approvals from the USSR Academy of Sciences. The popular science publication provides theoretical justifications for the construction of a mega-structure in a narrow part of the Bering Strait.

The whole logic of the project is built around a simple thesis - first to scare, and then to offer salvation. Borisov, together with the academicians, decided to scare the readers with the imminent onset of a new ice age, which was supposed to actually paralyze most of the USSR by the 80s-90s of the last century. Permafrost should have reached at least the Urals. Now, in an age of panic struggle against global warming, the ideas of Soviet scientists seem to be especially naive. 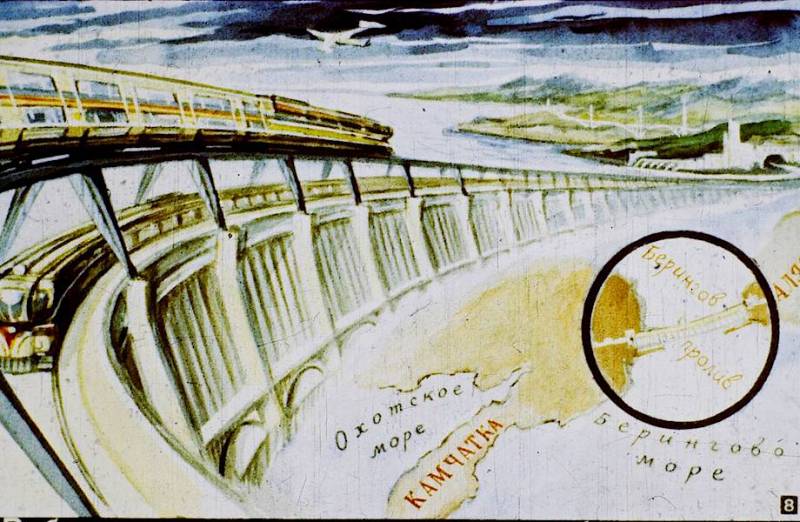 A little about what Pyotr Borisov decided to fight with.

And these are neither more nor less cold masses of water that stop the Gulf Stream just beyond Scandinavia. Water comes from the Pacific Ocean just through the Bering Strait and noticeably cools Russian Eastern Siberia and the Far East. That is why it is logical to block the strait in its narrowest 74-kilometer part to a depth of 50-60 meters and thereby block the transfer of cold water to the Arctic.

The plans included a system for pumping cold water from the north to the south with the help of powerful pumps from the dam. Pumping water from the Chukchi Sea to the Bering Sea required, according to the most conservative estimates, at least 25 million kilowatts of energy annually.

An important point of the Soviet megaproject was close cooperation with the United States and Canada - after all, the thermal reclamation of the Arctic was supposed to improve the climate in these countries.

Pyotr Borisov proposed to split the costs and dispatch to the USSR no more than 40% of the funding, that is, about 8-10 billion rubles.

In addition to the dam itself, the author of the project has planned a lot of infrastructure projects.

On the eastern and western shores of the strait, two cities with 50 thousand inhabitants each, two ports and a cascade of nuclear power plants were to appear to power those very pumps.

As an option, we considered the construction of several thermal power plants operating on local coal. In case of successful implementation of the latter idea, the region was waiting for a real apocalypse - smog from dozens of thermal power plants would obscure the sky for decades. And, of course, the dam included a double-track railway and a freeway connecting Eurasia and North America. 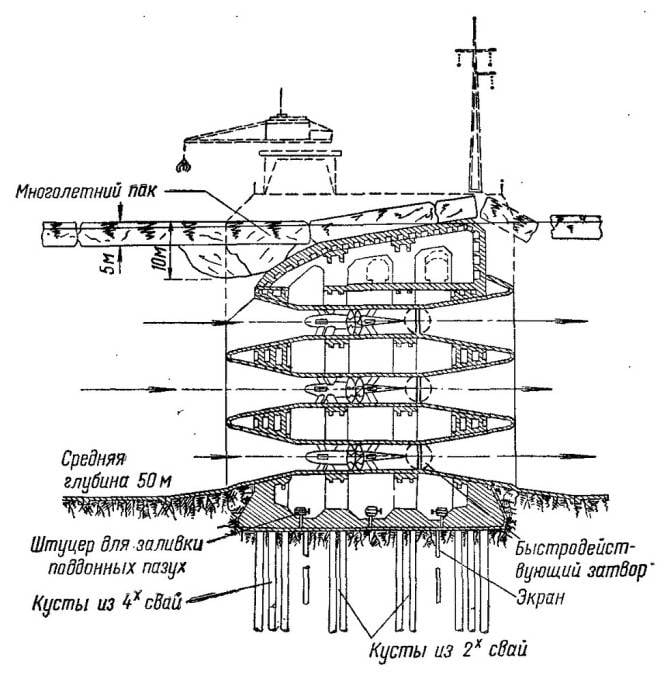 Cross section of the dam. Sketch from the book "Can a Man Change the Climate"
We should also dwell on the structure of the dam itself.

Pumping water from the northern to the southern pool would inevitably lead to the accumulation of Arctic pack ice with a thickness of 5 to 10 meters, which, over time, would simply demolish the multibillion-dollar structure. For this, the author provided fairings on the upper part of the dam, along which the ice masses simply rolled to the southern pool.

But what about the railroad and motorway in question?

Borisov believed that the ice should eventually end, and then the streamlined part of the dam could be rebuilt for transport arteries.

To understand the situation in which such ideas of a radical change in nature developed, it is worth realizing in what reality people lived at that time.

Science and technology ruled the world - man flew into space, nuclear energy was harnessed, powerful hydroelectric power plants block the channels of giant rivers. The contemporaries of the scientific and technological revolution had a distinct feeling that from now on everything is possible and the forces of nature in a person's pocket.

In support of this thesis, the author quotes the words of the Russian oceanographer Stepan Makarov in his book:

Therefore, the project of Peter Borisov, with a successful coincidence of circumstances, could be implemented, albeit at the cost of unprecedented costs.

What would this lead to?

Here we can only talk about the likely scenario of the development of events, but it is not at all rosy.

First, consider the opinion of Peter Borisov himself, who assumed the return of the Arctic climate by 1,5 million years ago.

Quote from the book of the engineer:

“The tundra off the coast of the Arctic Basin will disappear - only a narrow rim will remain at the Greenland Ice Sheet. In its place, forests will settle: coniferous - closer to the Pacific Ocean, deciduous - closer to the Atlantic. Broad-leaved species penetrate to the northwest of Kamchatka. Deciduous forests will also occupy Eastern Siberia, replacing coniferous taiga. Due to the mild warm climate, Atlantic species of tree species, including hornbeam and beech, penetrate into Western Siberia, to Tobolsk and to the adjacent southern regions. The aridity of the deserts of Central Asia will decrease. In the territories of our Central Asian deserts, it will drop to such a level that the revival of the steppes will become possible. Subtropical crops can be grown in the Black Sea region and in the lower interfluve of the Don and Volga. The climate of Western Europe will become warmer and more stable ”.

Borisov's forecasts also included the Sahara, which was supposed to turn into a semi-desert. Moreover, the first climatic effects from the dam would have occurred already 2–4 years after construction. 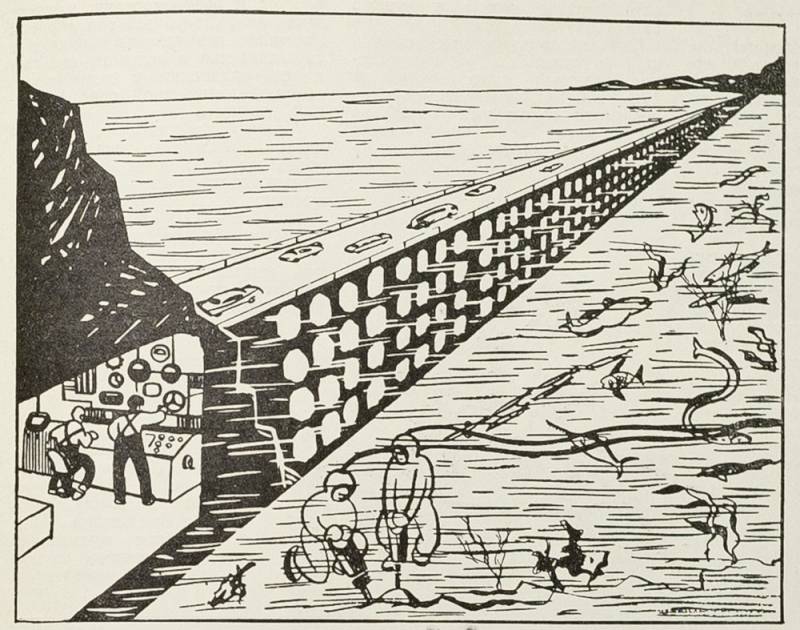 But, besides the oranges in the Russian middle zone, the dam in the Bering Strait brought with it a lot of risks.

So it is not clear why the scientists who reviewed the work of the engineer did not point out the fundamental errors to the author.

For example, the fact that simultaneously with the thermal reclamation of the Arctic, Japan, Polynesia and the Russian Primorye would inevitably cool. After such tricks, the Gulf Stream could permanently freeze at the border of the Northern Urals, and this would cause a new ice age in Europe.

The temperature would also drop in the Arctic, ice approached the northern coast of the USSR and blocked the deltas of the country's largest rivers. High water in this scenario would have flooded half of the east.

But even if the Gulf Stream extended into the depths of the Arctic, the consequences for the Soviet Union would not be the most straightforward. As a result, permafrost is melting everywhere, gigantic waterlogged areas are turning into swamps, from which previously bound methane comes out in millions of tons.

By the way, now something similar is happening with the Russian Far North and the Far East.

As it turned out, the answer to the thesis in the title of the book "Can a Man Change the Climate" turned out to be in the affirmative. Only for this, the Pyotr Borisov dam was not needed.

Ctrl Enter
Noticed oshЫbku Highlight text and press. Ctrl + Enter
We are
Chernobyl notebook. Part of 3Diplomats of the People's Commissariat of Defense: on the eve and during the war
Military Reviewin Yandex News
Military Reviewin Google News
101 comment
Ad