India in the global game

20 September 2012
14
It’s hard to find a country with more contrasts than India. This is a real civilization, one of the oldest on the planet, the whole world, which had a huge impact on the South Asian region. Currently, India is a regional power with nuclear weapons, huge demographic resources and a strong economy. India is one of the leaders in the field of high technologies, the largest importer of modern weapons (the country has a large-scale and expensive modernization program for the armed forces). The state is launching space satellites, has its own launch vehicles, put forward an ambitious space program, where in 2016 the Indian Space Research Organization (ISRO) is going to start manned space missions. The Indian National Space Agency is seriously planning manned flights to the moon and to Mars. At the same time, India strikes people with the poverty of hundreds of millions of people, huge social stratification and significant corruption. For example, in 21 million, Mumbai (Bombay), more than 60% of the population live in slums, without electricity, running water and other amenities of the modern world. Two thirds of citizens of India live on less than two dollars a day, up to a quarter of the population can neither read nor write, every third child suffers from malnutrition. And this is close to universally recognized global high-tech centers such as Bangalore and Hyderabad, where computer specialists receive not less than American salaries. Most government programs aimed at helping the poor have failed. Much of the funds allocated to social programs are simply stolen. 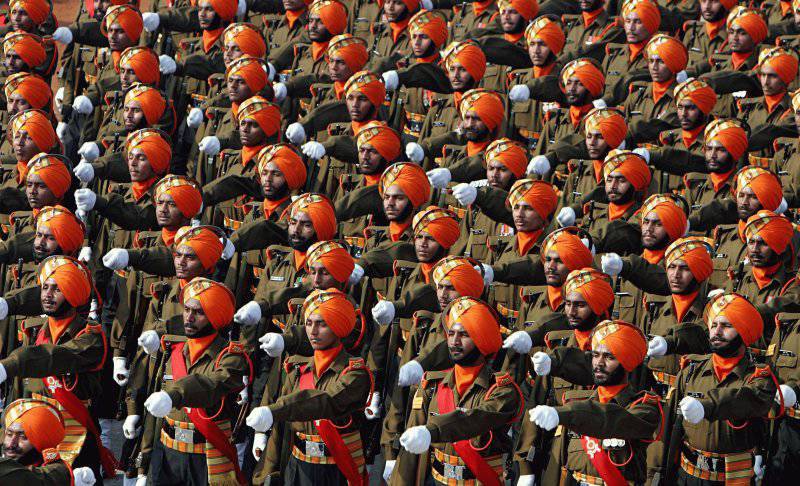 Together with China, modern India, which is somewhat behind its neighbor in terms of size and population, is one of the most promising developing countries in the world community. India differs from China by the fact that there is no single party at the head of the state. Formally, the Republic of India is a democratic country, with institutions of power typical for the West, with a free press and an independent judiciary. However, like China, India keeps the ancient traditions, in particular, there exists a division of society into castes. Ancient beliefs define the life, the whole life of a simple Indian from birth to death.

It should be noted that the Indian political and business elite is largely focused on London and Washington. The British did a lot of work during the colonial period in order to “nurture” the elite they need. India in the postcolonial period was never able to become a completely independent great power. The Anglo-Saxons according to the principle of "divide and rule" skillfully dismembered Indian civilization into India and Pakistan proper (Bangladesh then broke away from it). The United States, which continues the policy of the British Empire, still skillfully plays on the Indo-Pakistani and Indian-Chinese contradictions. In addition, the Islamic factor is used to control India.

During the period of existence of two superpowers - the USSR and the USA, India built strong bilateral relations with both countries. After the collapse of the Soviet Union there was a roll towards the United States. Washington, in turn, began to adhere to neutrality in the India-Pakistan territorial disputes, managing to earn considerable money by selling weapons to Pakistan and India. The success of the operation in the Persian Gulf in 1991, the collapse of the USSR, dramatically strengthened the position of the United States in the world and Islamabad ceased to be the main strategic partner of Americans in the region. In addition, Washington began to worry about the growth of extremist, radical sentiment in Pakistan. There was a danger that radical Islamist groups would come to power in Pakistan and gain access to nuclear weapons. Washington and Delhi became partners in countering this possibility. Thus, in 2011, information appeared about a possible US operation, with the support of India, against Pakistan, in order to neutralize the Pakistani nuclear potential. Only the rigid position of China, which was ready to intervene in the conflict, forced Washington to abandon this idea.

After 11 September 2011, the United States began to attach greater importance to cooperation with India. Delhi is interested in the stability and security of the South Asian region, in protecting its territory from the threats that come from Afghanistan and Pakistan. At the same time, the Indian elite was concerned about the fast power of the old rival, China. These factors became the basis for cooperation between the United States and India at the beginning of the 21st century.

The United States, in turn, is interested in India, as in one of the states, which should restrain the Middle Kingdom (along with Japan, South Korea, Taiwan, the Philippines and Vietnam). India should play a certain role in conflict with the Islamic world. The role of India in the Big Game and the upcoming global conflict is clearly visible in the process of arming the Indian armed forces and armies of neighboring states. The arms race is conducted by Islamic countries, India, China, almost all the neighbors of the Middle Kingdom (its potential adversaries). In particular, India has increased its military budget for the 2012-2013 fiscal year by 17%. And in the previous fiscal year, the Indian military budget grew by 12%. According to the report of the Stockholm International Peace Research Institute (SIPRI), for the period from 2007 to 2011, India was the world's largest buyer of weapons. The country is preparing hard for a big war. The Indian military frankly declare that they are preparing for a war on two fronts (against Pakistan and China).

A few days ago, news came that the Indian Ministry of Defense was deploying six new armored regiments equipped with 348 on the Chinese border. tanks (two tank brigades). As a result, troops stationed on the border with China will gain offensive capabilities. In addition, three motorized infantry battalions will be transferred to the Sino-Indian border. There is evidence that the Ministry of Defense requires the acquisition of additional T-90 tanks for new tank brigades (the Indian military wants to have the latest version of the T-90 tank - T-90MS). India also plans to strengthen 40 thousand. mountain rifle corps in the north-east of the country - include a tank brigade in its composition, which should strengthen the shock capabilities of the connection. The Indian military has already significantly strengthened the Air Force and Air Defense in the north-east of the country, eight advanced landing sites are being modernized to support offensive operations in the region.

Obviously, India at the present time is not a completely independent center of power, which can bend its line in global politics. India is a figure in the Big Game, and it leads to a clash with China and the Islamic world. The only question is whether this clash will be the central element of a major war, or just one of the fronts of the global battle.