20 September 2012
28
The simplicity of the device and the use of a mortar in combination with good fighting qualities quickly provided this type weapons wide use. More than a hundred years have passed since the appearance of mortars. During this time, they retained their popularity and continued to improve. Now the development of new mortar systems continues in several countries, including Russia, where the Nizhny Novgorod Central Research Institute Burevestnik is developing this area.

Work on the improvement of old mortars and the creation of new ones relate mainly to two directions of the battalion link - weapons of caliber 82 and 120 millimeters. First of all, it is worth noting the modernization of the 2C12 “Sledge” complex with the 2C12А index. Adopted in 1981 year, the 2C12 system consists of a mortar 2B11, a wheel travel and a towing vehicle. The mortar itself has undergone major changes. The main element of the modernization of the mortar 2B11 - a new base plate and its interface system with the barrel. Previously, the trunk could only swing in the same plane. Thanks to the use of a new base plate with a hinge, the updated mortar can also be induced horizontally. This allows you to transfer fire to another target without turning the heavy base plate. In addition, 2B11 received a number of new tools and features. The updated shooting mechanism can be quickly and simply removed, the analysis of the mortar is not required. At the special additional rack of the gun carriage there is a knot for mounting the sight, thanks to which it is possible to direct the entire battery using only one aiming device. In addition, the set of updated “Sanya” includes devices that allow you to quickly and easily perform the alignment of the sight, as well as firing at night. 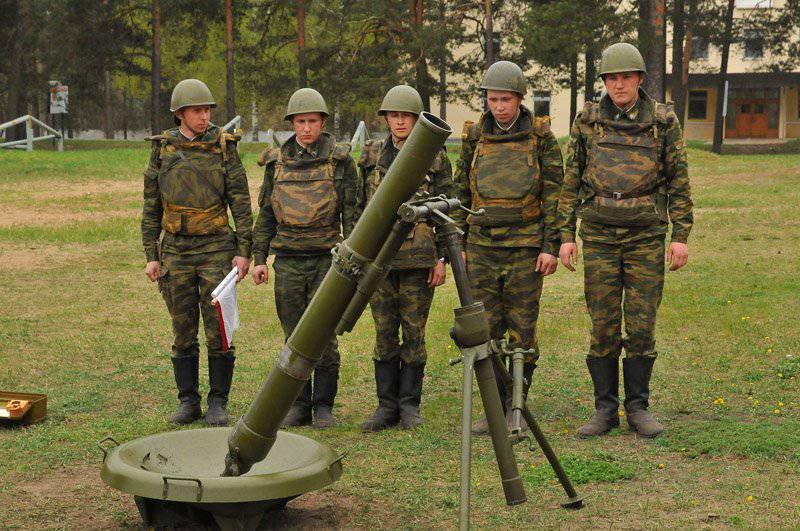 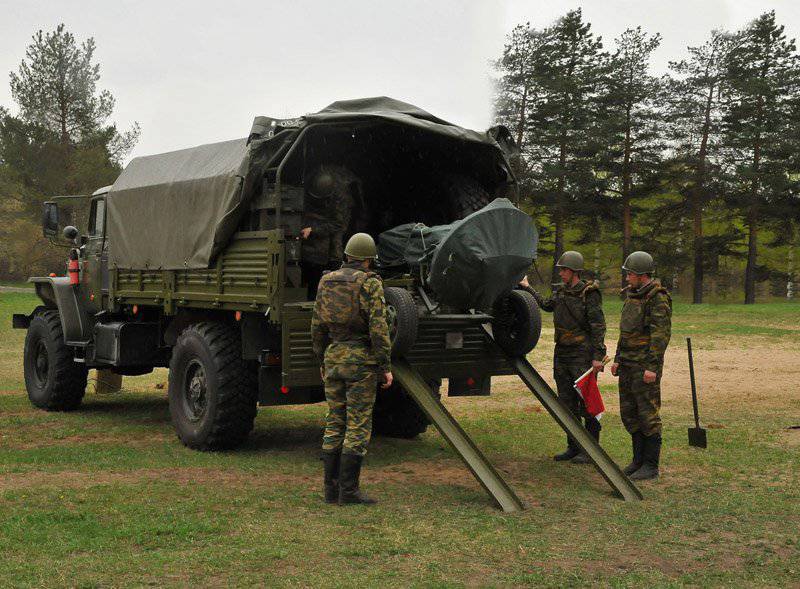 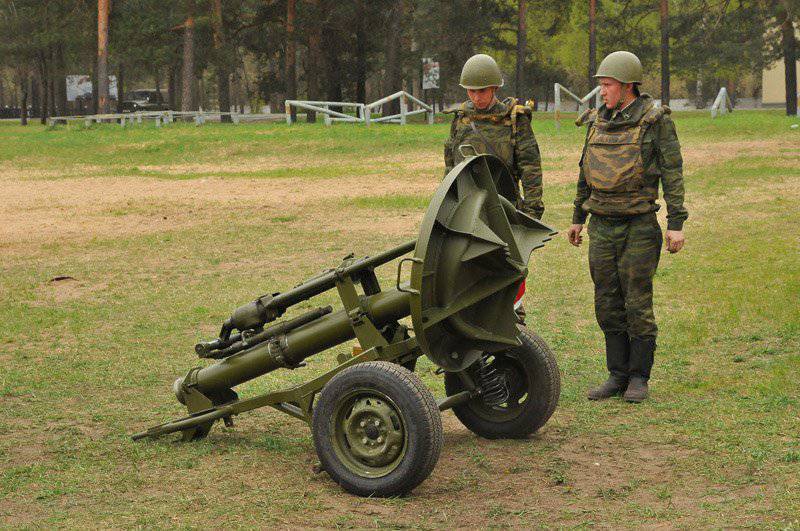 In order to maintain maximum unification with the original 2C12 complex, the modernization did not affect the main part of its units. For this reason, the range and accuracy of shooting remained at the same level. As before, “Sleds” can shoot ordinary mines at a distance of up to 7100 meters. When using the guided KM-8 “Edge”, the range of target destruction increases to nine kilometers. In the course of the modernization, the 2C12А received a new towing vehicle. Now it is a truck "Ural-43206" or tractor MT-LB. Transportation of the mortar with a wheel course can be carried out either by simple towing, or in the back of a truck or on the roof of a tracked vehicle. For loading transport vehicles are equipped with a quick-detachable ramp of a tray design and a winch. The updated composition of the equipment of the complex provides a faster transfer of the complex from the marching state to the combat state and vice versa, including by means of reduced calculation.

Another project to upgrade the old mortar is called 2B24 and is a further development of the 2B14-1 “Tray” project. 82-mm gun due to its size and weight can be transported unassembled by the calculation of four people. The design of the 2B24 mainly differs from its predecessor in the barrel length. This innovation has significantly increased the maximum firing range, now it is equal to six kilometers. Mortar 2B24 can shoot all available mines caliber 82 millimeter. In addition, during its development, a high-explosive mine mine of increased power 3-O-26 was created. Like the mortar of the 2C12А complex, 2Б24 has a new joint of the trunk and baseplate mating, which allows shelling of targets in any direction, only turning the barrel and rearranging the carriage supports. The permissible rate of fire of the gun increased to more than twenty rounds per minute. To ensure an acceptable temperature regime of the trunk and to avoid its deformation, there is a finning-radiator on the breech. 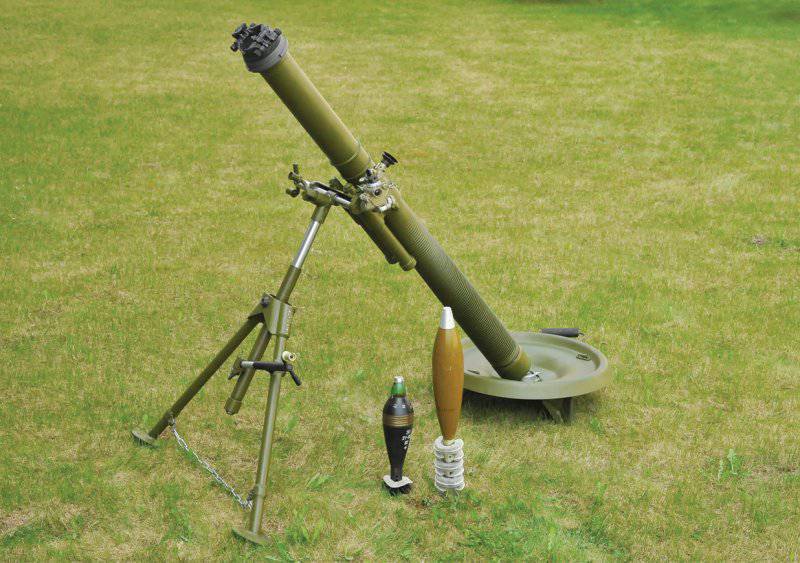 Being wearable, the 2B24 mortar can be disassembled into three main units, which are packed into packs. One fighter at the same time carries the barrel, the second carries a baseplate, and the third carries a two-legged carriage and a sight. The fourth number of the calculation is a special backpack-pack for ammunition. Without any changes in the design, the 2B24 mortar can be converted from portable to self-propelled. To do this, using a special mounting kit, the mortar is installed in the troop compartment of an armored tractor MT-LB. Such a complex was named 2K32 "Virgo". It is noteworthy that the 2FXNNXX-510 mounting kit allows you to quickly remove the mortar from it and use it in a wearable version. Ammunition of the 2K2 combat vehicle is 32 mines.

Of particular interest is the 82-millimeter mortar 2B25. First of all, attention is drawn to the dimensions of this tool. With a significant caliber unassembled, it fits into just one container. The calculation consists of two people, one of whom carries the mortar itself, and the second - ammunition to him. Despite its small size, 2B25 can fire at targets in the range from 100 to 1200 meters. However, the most interesting element of the complex is a new fragmentation mine 3BO35. The main innovation in its design - the original shank with a propelling charge. Inside the shank is not only charge, but also a cylindrical piston. Before the shot, the mine is placed in the mortar barrel, after which the firing mechanism ignites the propelling charge. Powder gases, expanding, push the piston out of the shank, which, in turn, rests against the tile of the firing mechanism and throws a mine out of the barrel. Having reached the extreme position, the piston gets stuck inside the shank and does not allow the powder gases to go outside, due to which the sound of the 2B25 shot is just a few soft loud pops and clicks. 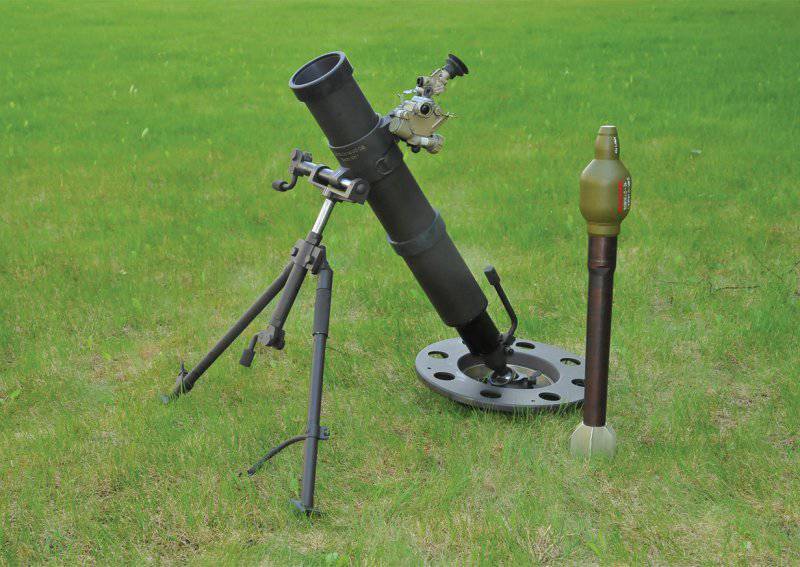 The silent mortar 2B25 was first presented last year at the MILEX-2011 exhibition in Minsk. Then it became known that the mass production of the mortar had already begun. There is information about the continuation of work to improve the mortar to increase the firing range. However, without any changes, the 2B25 mortar is the world's first serial silent mortar with a powder charge for throwing ammunition.

Despite the fact that all the main nuances of the mortar design have long been invented and "polished", the development of such systems is still ongoing. The development of this area is primarily concerned with measures to improve the range and firing accuracy, as well as to facilitate the design. Also a promising way to improve mortar systems is the creation and use of adjustable ammunition. As for special constructions like the silent 2B25, this is rather a special tool for special units, but not a weapon of a mass army. At the same time, since the start of the use of the mortar 2B25 (if any), not enough time has passed and it is impossible to draw conclusions about the prospects of the whole direction. Perhaps in the future mortars will be created, combining the fighting qualities of the updated 2B11 and silent 2B25, and such a weapon will be sent to the troops in large numbers. This is only a guess, and what the future mortar will look like will be possible to say only in a few years, when the experts of the Petrel Research Institute will show their new developments.