Strategic weapons of new classes for the Russian Navy 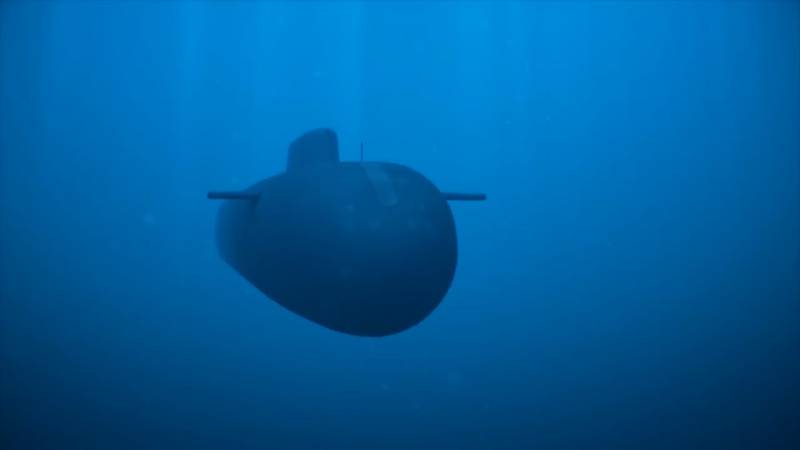 The carrier of the Poseidon apparatus in the demo video. This role will soon be taken on by "Belgorod" and "Khabarovsk"
Currently, within the framework of the general development of the strategic nuclear forces, a whole range of new projects of various kinds are being developed. Some promising samples are being created for the naval fleet, and we are talking about weapons and equipment of different classes, incl. fundamentally new. The completion of these projects is expected to have a positive impact on the strike capabilities of the Navy, as well as change its role in strategic nuclear forces and containment processes.

The core of the naval component of the nuclear triad is made up of carriers of strategic weapons. In particular, for some promising samples weapons special-purpose carrier submarines are being created. Recently, the current state and prospects of one of these projects have become known.

According to TASS, on December 25 the general director of the Sevmash plant Nikolai Budnichenko spoke about the beginning of state tests of the special nuclear submarine K-329 Belgorod. They are planning to complete them next year. More precise dates have not been named, but there is reason to believe that by the end of 2022 the ship will enter the combat composition of the fleet and will be able to carry out patrol missions. 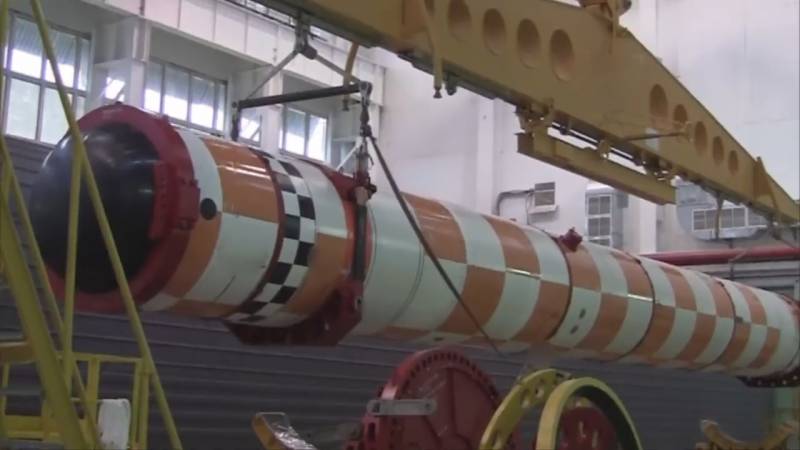 Experienced product "Poseidon"
Reportedly, the K-329 "Belgorod" will become the first regular carrier of the Poseidon unmanned underwater attack vehicles. Together with them, the cruiser will receive a special place in the naval component of the strategic nuclear forces and in the containment system as a whole. In addition, there is information about the possible equipping of "Belgorod" with other types of underwater vehicles intended for reconnaissance and other work.

The second carrier of the Poseidons will be the only nuclear submarine of the special pr. 09851 - Khabarovsk. This ship was laid down in July 2014, and the launch was supposed to take place in 2021. By the middle of the decade, the submarine may enter the combat composition of the fleet. Other details are unknown.

В the news In recent years, there has been another special submarine - "Ulyanovsk" of project 09853. It was reported that it was laid down in 2017, and no later than 2027 it will be transferred to the fleet. Technical details are lacking, but it is assumed that Ulyanovsk will also be able to carry Poseidon products or newer weapons of a similar class.

In parallel with the construction of the launch vehicles, work continues on the Poseidon itself. In recent years, it has been reported that tests of individual components and assemblies are being carried out, as well as the imminent start of inspections of full-fledged experimental products. This year there have been some interesting news about the unmanned underwater vehicle and support projects. 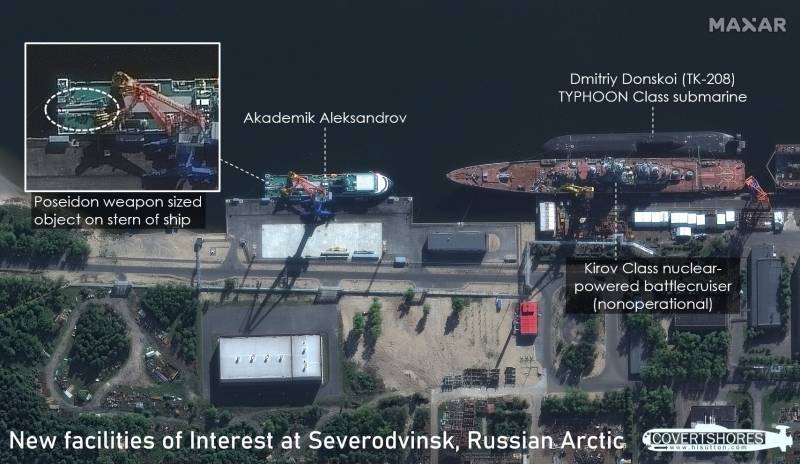 Satellite image from Maxar, presumably with an experienced Poseidon
In mid-January, RIA FAN, referring to its sources, announced the construction of a new facility for the Navy, which will actually become the base for the Poseidons. In an unknown place, the necessary infrastructure is being built for the storage, maintenance and preparation of unmanned vehicles, as well as for their transfer to carrier submarines. The work at the facility was planned to be completed by the summer of 2022.

Apparently, tests of full-fledged experienced Poseidons have already begun. Possible proof of this was presented in August by satellite operator Maxar Technologies and then published by Covert Shores and USNI News. The satellite image captured the port of Severodvinsk, where a special oceanographic vessel “Akademik Aleksandrov” was docked at the berth. An oblong object was present at the stern of the ship.

Foreign experts suggested that this elongated product is a prototype of the Poseidon. From this, it was concluded that sea trials were carried out. However, no other evidence was provided, and this version did not receive official confirmation or refutation.

The current state and immediate prospects of the Poseidon project remain unknown. At the same time, it is clear that the work continues and is gradually moving to new stages. We should already expect to carry out full-fledged tests, incl. and with a regular carrier. In addition, according to this year's news, the infrastructure is being prepared for future operation. All this provides well-known reasons for optimism. 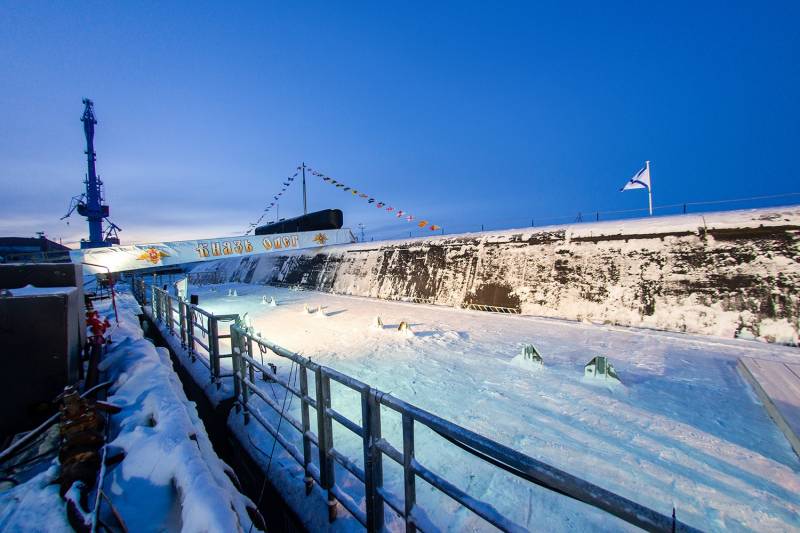 Several years ago it became known about the development of unusual strategic weapons for the Navy - the so-called. bottom missile complex with the code "Skif". In the future, he was almost forgotten, but a few days ago he again became the topic of publications. At the suggestion of Gazeta.ru, the Skif missile system is being discussed in the same context as the Poseidon unmanned aerial vehicle. The publications on the two products examine their potential and their ability to influence the capabilities of the fleet.

As reported, the "Skif" project was developed by the State Research and Development Center im. V.P. Makeeva. In 2013, the design stage was completed, after which tests of an unknown nature began. Already in 2017, it was reported that the new type of missile systems "are included in the arsenal of the armed forces." However, details were not given then, and new messages were no longer received. As a result, the current status of the project and its real prospects are unknown.

According to reports from previous years, the Skif project envisages the construction of a special autonomous launcher. A special carrier submarine must deliver it to a given area and install it on the seabed. The watch is carried out offline; the launch is carried out by a command from the control center. Some sources reported that the installation can both be on duty at a given place, and independently change position.

In reports about the "Skif" it was mentioned that the installation would carry a ballistic missile with a range of at least 300 km. Other technical details are still unknown. At the same time, it was reported that there are a number of fundamental advantages that will allow the complex to perform tasks at the strategic level. 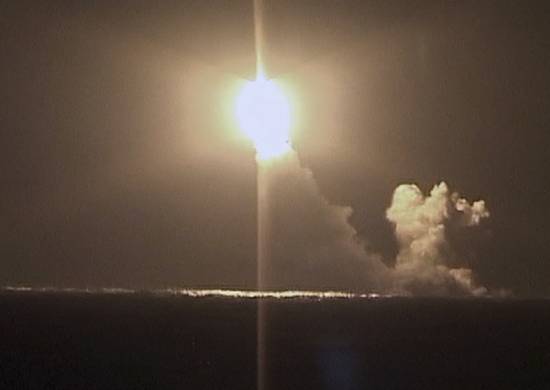 The naval component has a special role and special significance within the framework of the strategic nuclear forces, and therefore every effort is made to preserve, develop and modernize it. These tasks are accomplished in two main ways. The first consists in the further development of the available means and forces, and the second involves the creation and development of fundamentally new concepts and models.

The first path of development is manifested in the constant modernization of old-type strategic submarine missile carriers and in the construction of new ones. The same processes are observed in the field of submarine ballistic missiles. The next results of this could be observed the other day. The delivery of the new SSBN "Prince Oleg" and the withdrawal of a similar submarine "Generalissimo Suvorov" from the boathouse were consistently carried out.

The second development method poses more complex challenges, but our industry is coping with them successfully. It develops and builds promising unmanned underwater vehicles, as well as special carrier submarines for them. Also, at least, a fundamentally new sea (underwater) missile system with special capabilities has been developed.

Despite all the secrecy, it is known that new projects of various kinds are successfully moving forward and should give real results in the near future. Prospective samples will be tested, after which they will be put into service. All this will understandably affect the strategic capabilities of the fleet and its role in the nuclear forces, as well as help to ensure national security and maintain peace.