Work is in progress: repair and modernization of "Admiral Chabanenko" 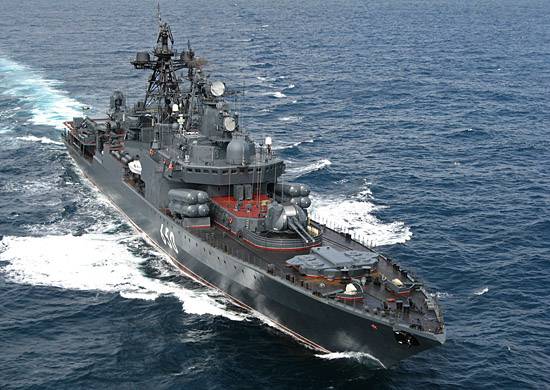 "Admiral Chabanenko" in its original configuration

The repair and modernization of the large anti-submarine ship "Admiral Chabanenko" pr. 1155.1 has begun. It is planned to restore the technical readiness of structures and systems, as well as to replace electronic and missile weapons. As a result of such events, the combat capabilities of the ship will significantly increase, and it will be transferred from the BOD to the frigate class.

Since 2014, the BOD "Admiral Chabanenko" has been at the Zvezdochka Ship Repair Center, awaiting repair and modernization. For various reasons and circumstances, the start of work was repeatedly postponed. As it became known later, this was due to the need to develop and approve a new project of deep modernization.

The situation began to change this year. In July, Izvestia, citing its sources in the Defense Ministry, announced the completion of preparations for repairs and modernization. By that time, the customer and the contractor had agreed on a work plan for "Admiral Chabanenko" and proceeded to assess the timing of their implementation.

At the same time, new technical details became known. According to Izvestia, BPK pr. 1155.1 must undergo modernization, similar to the project for updating the previous project 1155. It is planned to replace the main missile systems and install the most modern models. In particular, the Zircon hypersonic anti-ship missile will be integrated. 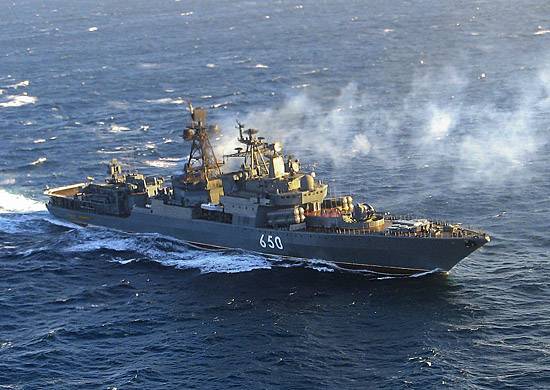 As a result of such modernization, the potential and combat capabilities of "Admiral Chabanenko" will go far beyond the original anti-submarine role. In this regard, the ship will be reclassified from BOD to frigates. In this case, the ship will retain 1 rank.

Repair work started in August 2021. For the first stage of work, the ship arrived at the Nerpa shipyard in Snezhnogorsk and docked in dry dock. The task of the plant employees was to study the state of hull structures and various units in order to search for damage, defects, etc. with their subsequent elimination.

On December 22, on the air of the Murman State Television and Radio Broadcasting Company, the Nerpa team reported on the work performed. Despite the complexity and volume of repairs, the work was completed in just a few months. The required condition of the hull, kingston boxes, ship tanks, various fittings, etc. has been restored. To accomplish such tasks, the corps crews had to work in three shifts.

As reported, in the near future "Admiral Chabanenko" will be launched again, after which it will be delivered to the shipyard in Murmansk. The next stage of repairs will take place there and modernization will be carried out, providing for the replacement of equipment and weapons. According to Murman, the modernization will be completed in 2022-23.

On December 27, Izvestia raised the topic of work on "Admiral Chabanenko". According to his source in the Ministry of Defense, the implemented schedule really provides for the completion of all work by the end of 2023. After that, the ship will return to the combat strength of the Northern fleet - already in a new quality and with wider possibilities. 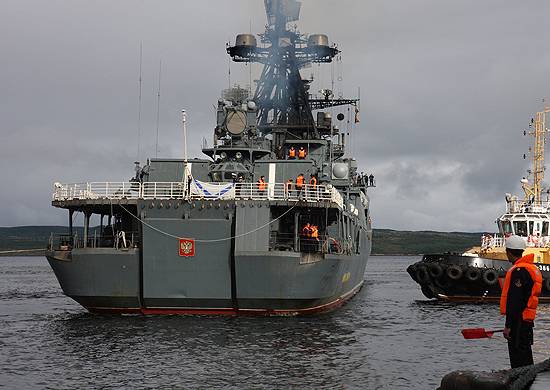 The aim of the modernization of the existing BOD is to replace a number of radio and radar equipment, weapons, etc. The latest and very detailed data on this subject was disclosed by RIA on December 27 News... This message confirms plans to expand the range of weapons and a corresponding change in the range of tasks to be solved.

The upgraded frigate will receive a 3C-14 universal shipborne firing system with cells for various types of missiles. Thanks to this, the ship will be able to use cruise missiles "Caliber" for various purposes, as well as anti-ship products "Onyx" and "Zircon". The total ammunition load of such UKSK will be 16 missiles.

The launchers of the P-270 Mosquito anti-ship missiles will be removed. The vacated areas will host four installations of the Uranus complex for 16 missiles. Thus, the total ammunition load of the strike missile armament will reach 32 units.

The air defense of the ship and the formation will be provided by the modern Pantsir-M missile and cannon system. This product will replace the existing Kortik complex.

The installation of new radar stations was mentioned. Other modern radio-electronic and radio-technical equipment will also be installed. However, specific names and indexes were not named. 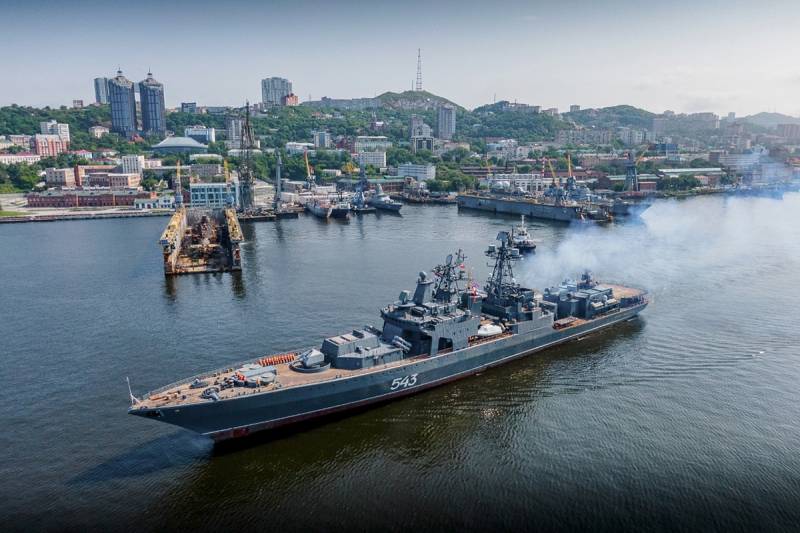 "Marshal Shaposhnikov" project 1155 on sea trials after modernization
The RIA Novosti source specified the work schedule. Repair of structures and installation of new equipment will be completed during the next 2022. In the fourth quarter, the ship is planned to be put on sea trials. The dates for their completion have not been named, but it is clear that no later than the end of 2023, the updated frigate will return to the fleet.

One of the main and most noticeable goals of the modernization of "Admiral Chabanenko" is the replacement of standard weapons. It is she who will provide a sharp expansion of the range of tasks to be solved and the growth of other combat qualities, as a result of which the BOD will become a frigate. The latest news about the planned composition of weapons allows us to assess the potential of the updated ship.

First of all, "Admiral Chabanenko" will expand its strike capabilities. In the initial configuration, the BOD carried only eight P-270 Mosquito missiles. As a result of the modernization, it will receive 16 Kh-35 missiles, and will also be able to carry the required number of Onyxes and Zircons. In addition, it will be possible to attack coastal targets using Caliber missiles. According to the latest news, the former BOD will be able to use the latest anti-submarine missiles "Answer".

As a result, the total number of missiles on board will grow exponentially. At the same time, missile armament will become more effective and flexible, and the ship will be able to attack with them not only surface targets. It is important that the renewal of missile weapons will practically not affect anti-submarine capabilities. 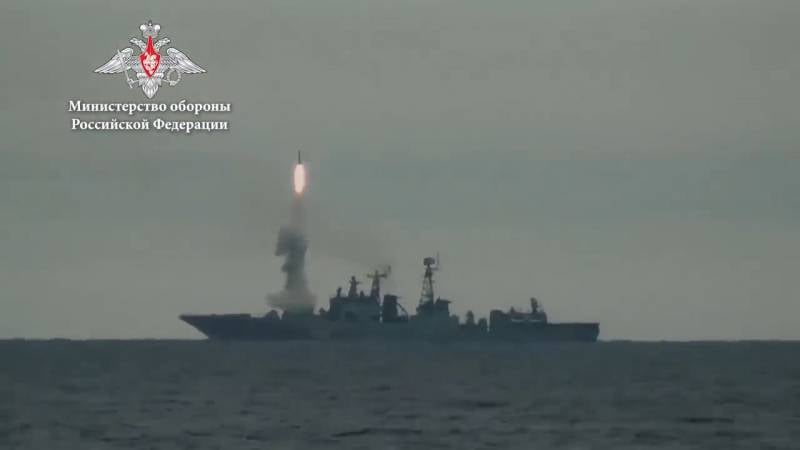 Rocket launch "Answer" from the board of "Marshal Shaposhnikov"
Replacing the existing ZRAK "Kortik" with modern systems "Pantsir-M" will improve the air defense of the ship and / or detachment. The new ZRPK has a number of important advantages over the older one. This is an increased range of tracking and firing targets, the ability to track and intercept complex objects, etc.

The exact composition of electronic weapons after modernization remains unknown. However, we can expect that with him "Admiral Chabanenko" will increase the detection range of surface and air targets, incl. subtle. The reliability of tracking and the accuracy of the use of weapons will also increase. New communication systems will provide full and secure data exchange in any conditions.

Thus, the modernized frigate will retain the main structures, power plant and part of general ship systems - and will update all other complexes, devices and products. Due to this, he will be able to fully fight not only with submarines and, in fact, will become a universal warship. According to some estimates, the upgraded ship will even exceed the requirements for frigates in terms of its capabilities and in fact will become a "mini-cruiser".

At the moment in the combat strength of our Navy there are seven ships of project 1155 and one representative of the later project 1155.1. According to the plans of the Ministry of Defense, in the long term, they will all undergo modernization with the replacement of key systems and weapons. And recent news shows that the implementation of such plans is quite realistic.

So, in April 2021, the updated Marshal Shaposhnikov returned to the Pacific Fleet, and Admiral Vinogradov took his place at the repair enterprise. Work on it will be completed in 2025. Right now, the Admiral Chabanenko of the Northern Fleet is preparing for a new stage of modernization, which is to return to service in 2023.

Thus, as a result of a difficult and slow program of modernization of available ships, the Russian fleet will receive up to eight "mini-cruisers" with the widest possibilities. This will make it possible to keep high-ranked large ships in service, extend their service life, and bring their capabilities in line with current requirements.