20 September 2012
39
Not so long ago, a series of materials was published on the Military Review devoted to who would be preferable for Russia as the new American president. The conclusion has matured about the following: as they say, horseradish radish is not sweeter. Softly creeping Barack Obama, by and large, is no better and no worse from the point of view of taking into account the interests of the Russian Federation than Mitt Romney, a candidate from the Republican Party who is eager to fight.

In principle, to expect from any American president (presidential candidate) of any kind of indulgence in the address of our country is completely meaningless. At all times, if such indulgences took place, new demands appeared in exchange, and new pressure was exerted on other issues. Such a policy of substitutions, which is present in terms of the relations of the highest American politicians to Russia.

But if we had time to speculate on how Obama is better or worse than Romney for Russia, now it is worth raising the question, and who in the current situation of the two candidates would be preferable for the United States themselves? Who can solve a whole heap of urgent problems in the USA, problems of both economic and political nature. 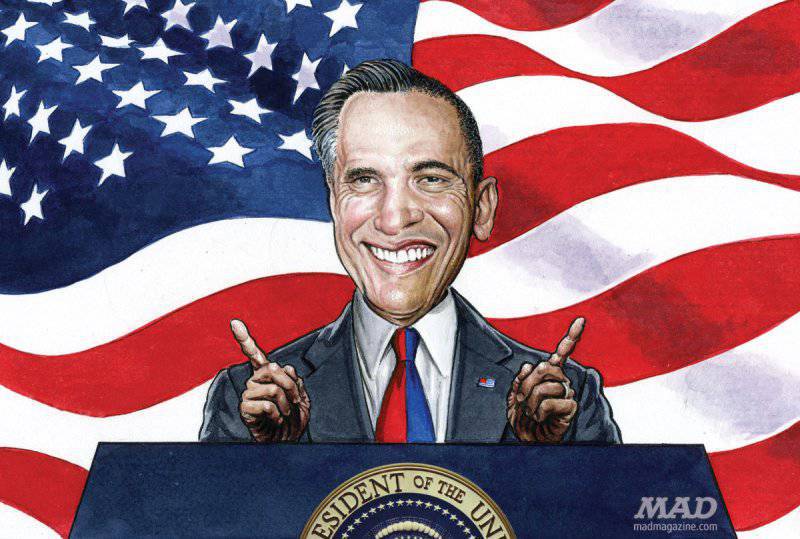 So, first we should pay attention to the slogans with which Barack Obama went to the polls at the previous elections. Here, first of all, it is necessary to touch on the economic promises of the current president, because in the United States recently the internal economic situation is the main issue for the voter.

During the pre-election race of the last political season in the United States, Obama said that the Bush administration had brought the situation to an economic stalemate: the number of unemployed reached 25 million people, the national debt grew by leaps and bounds, the credit system was virtually destroyed. Obama said it was time to start a new economic policy. Even his slogan “We (USA) need changes” became a serious incentive for the majority of Americans to vote precisely for the presidential candidate of the Democratic Party. Everyone in Obama’s accusations against Bush and his ineffective policies saw a bitter reality and seriously expected the new president, with the support of the new administration, to make a real difference.

Although Barack Obama turned out to be in the presidency, the impression was that the economic policy that had been pursued in the country since January 2009 remained absolutely the same as was the case under Republican George W. Bush. And if we take into account the fact that during the pre-election race Obama himself was slinging mud at the previous administration, stating that it was Bush who had plunged the country into a financial crisis, it becomes completely unclear why the economic levers of managing the country were left the same ...

There is one consideration on this point: Obama, together with his associates, might have been glad to undertake a large-scale economic reform, but only new points of this possible reform would either look utopian in advance, or lead to the same system in a suspicious way. in the US economy managed to emerge. It’s like an old joke: “Whatever we do, it’s still a rocket.” So are the Americans: the Republicans were in power, the economic crisis turned out, the democrats came to power - the first crisis worsened, the second began to be born. Apparently, for the American economy, this entire change of presidents is absolutely meaningless. With the same success, even a cat or a crow can be planted in the White House, because the economy will still develop along the path once planned.

And if for the time being, economic difficulties were used exclusively as a subject for a pre-election attack of a new candidate for the old president (or for a candidate from the party represented by the current president), and this attack was supported by many US citizens, today, if someone from the US citizens believe the words of the next presidential candidate who promises to overcome the crisis and reduce public debt, then this person can be called a complete optimist. Apparently, it is precisely the finished optimists who are going to rake Mitt Romney under his wing, who today declares that he is the main force that is able to cope with the economic turmoil in the United States. Oh well…

It is even possible not to go to any fortuneteller to predict that if Romney replaces Obama in the White House, the economic policy will still remain the same. Also, the Fed will announce new programs of quantitative easing, based on the printing press, endlessly drawing dollars. Apparently, in the United States, such a policy is simply passed down from generation to generation, as some kind of security certificate of a certain community. And this very community informs any candidate that you can criticize it as much as you like, but as soon as you take the presidency (if you take it), you pretend that you are going to reform something economically, but don’t touch anything with your hands. For several generations of American presidents (both Republicans and Democrats) they are doing this.

Now it is worth touching on another issue, namely, the foreign policy of the United States in terms of both a possible change of president and Barack Obama’s hypothetical second term. Here, again, you need to turn to the slogans with which the current owner of the American White House went into battle. I remember that he declared the desire to make the United States truly respected in the world a country. To do this, Obama was going to stop all the wars started under George W. Bush, close the Guantanamo prison and the secret CIA prison in Europe, start a new phase of relations with both his allies and those who in recent years have been accustomed to be considered the main American opponents: Russia and China.

Four years have passed, and again the feeling that the bacillus called “George Bush” has ultimately infected Barack Obama has not left. The Americans not only did not see the real end of hostilities and a complete victory over terrorism, but also felt even more hateful views on their part from representatives of various countries. The prison at Guantanamo continues its “educational process”. Having risen, there was Obama's rating after he launched the flywheel of the democratic revolutions in North Africa and the Middle East, in recent days (and this is the height of the election race) it began to plummet, which the Republicans gladly use. The same Romney declares Obama’s political weakness, which has allowed mass anti-American demonstrations throughout the Islamic world and is not taking active steps to punish those who stood behind the Benghazi murders of American diplomats.

Naturally, many Americans are already applauding these words of Romney: they say, would have been such a person like you, Mitt, now in power, all these Libyans, Egyptians and other suddenly manifested anti-Americanists would know what a “kuzkina mother” is in an American way.
True, the whole trouble is that from the American "smuggling mother" already begins to feel sick to many. Presidents come and go, and the overwhelming desire to get involved in conflicts in which no one expects the presence of Americans, continues in a strange way. The Republican Bush was sitting in the White House - brutal wars were unleashed, which claimed hundreds and thousands of lives for both soldiers of the enemy’s armies and civilians and American citizens, by the way. Democrat Obama came to the White House - nothing has changed in this regard. People in various countries continue to die from American military aggression, just as the Americans themselves continue to die from inevitable retaliatory strikes.

Even if Romney replaces Obama as president, nothing will change for the United States in terms of foreign policy. American citizens will also be sent to overseas territories to establish the "democratic order", coffins covered with national flags will still come back. And to cut this Gordian knot for several decades is impossible for either the Democrats or the Republicans.

In this regard, it is generally possible, in order to save money in the USA, to add one last name to the voting lists: Romnibam or Obaromni. Here, as they say, and feel the difference, gentlemen, American citizens ...