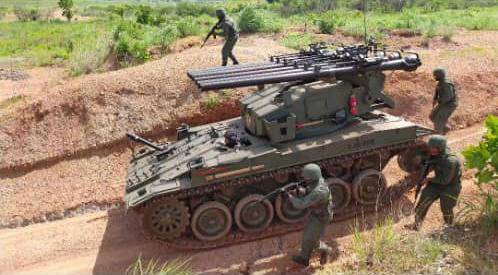 ACS Maisanta YZR, accompanied by infantry
The Venezuelan army is armed with only foreign-made armored vehicles. Nevertheless, attempts are being made to modernize and even rebuild it. A curious project of this kind became known a few months ago. An experimental anti-tank self-propelled gun of a characteristic appearance called the Maisanta YZR was made from the available components of foreign origin.

The first mentions of the new Venezuelan armored vehicle date back to the very beginning of June 2021.Then the first photographs of the prototype and some technical information came into free access. Video footage from the test site and other information soon appeared. Official and unofficial data provide a fairly detailed picture.

The project, as expected, attracted attention. First of all, this was facilitated by the original approach to its development. As part of the self-propelled gun used only available components and assemblies. At the same time, most of the key nodes are quite old, and the practical value of the resulting design is questionable. Nevertheless, this approach also has its advantages.

Loading process
The new SPG is reportedly called the Maisanta YZR, named after one of Venezuela's national heroes. The nickname "Maysanta" was once worn by Pedro Perez Delgado (1881-1924), a revolutionary, politician and ancestor of former President Hugo Chavez. Abroad, the car often appears under the nickname "Venezuelan" Ontos "- by analogy with a similar ACS of American design.

It is known that in the summer the new self-propelled gun was undergoing the necessary tests. It was reported on the confirmation of the main tactical and technical characteristics. As a result of these events, the Maisanta YZR could receive a recommendation for adoption. However, information of this kind has not yet been received, and the future of the new model remains unknown.

The lightweight chassis was used as the basis for the experimental ACS. tank AMX-13 French design. More precisely, its modified version for the LAR-160 multiple launch rocket system. It retained the standard body with anti-bullet and anti-fragmentation armor, the power plant and the chassis. At the same time, the tower of the original design was removed, instead of which a new unit of a different shape was installed. 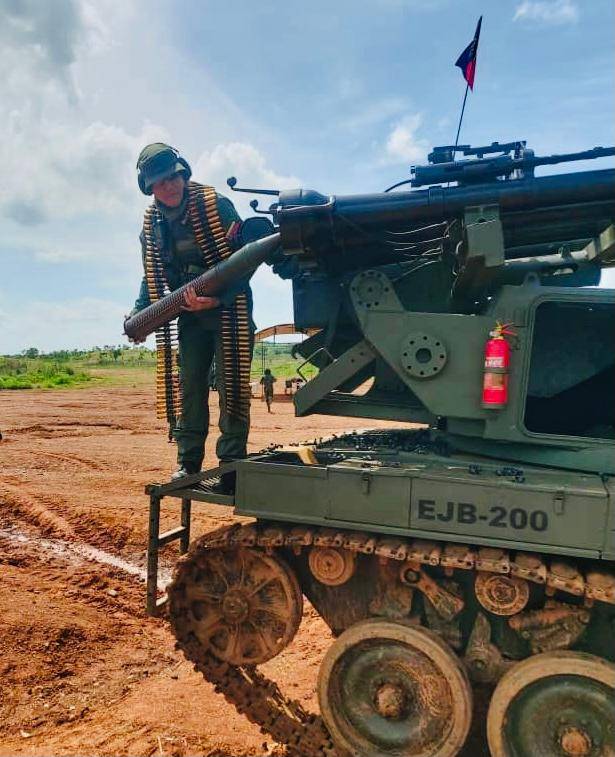 A swinging artillery unit is placed at the stern of such a tower. In the Maisanta YZR project, a new frame is placed on it, on which the main and auxiliary weapons, as well as sights of the original design, are located.

The main armament of the ACS consists of six M40A1 recoilless guns mounted in one horizontal row. A gun of this type has a 106 mm rifled barrel and a piston bolt with outlet nozzles. On top of the barrel is the M8C heavy sighting machine gun. With the help of a special cartridge that simulates the ballistics of a real projectile, it allows you to assess the aiming accuracy before firing. The effective range of the M40A1 is determined at 1350 m. The maximum is 6870 m.

The M40A1 gun uses 106x607 mm unitary rounds with different types of shells. There is a wide range of similar ammunition; mostly cumulative shells are used. Ammunition for the guns is stored inside the SPG hull, but reloading is carried out outside. To do this, the loader leaves the armored hull and climbs to the stern, from where access to the breech opens. Shots are fed to him through the hatches in the tower.

Secondary armament includes one M2HB heavy machine gun for self-defense. It is rigidly anchored in the center of the frame, between the middle implements. There is also an 81mm mortar. It, together with a base plate and a biped, was placed on the frontal part of the body. It should probably be used to launch smoke and lighting mines.

Maysanta uses an original fire control system. The second and fifth recoilless guns are equipped with optical sights similar to the Soviet PSO-1. Behind them are compact video cameras, the signal from which is fed to the operator's gunner's console. Another similar camera, not equipped with an additional sight, is located on the machine gun. According to the picture from the cameras, the operator carries out the aiming of weapons and opens fire - with the help of remote controls.

Due to the installation of new units on the turret of the Maisanta YZR self-propelled guns, it is more compact than the base MLRS LAR-160 and should have a lower weight. In this case, the driving characteristics can remain the same.

At the moment, ACS "Maysanta" exists in one or more copies for testing. Upon receiving positive results, the Venezuelan army can order the production of serial armored vehicles. It can be assumed that the local industry, despite the limited potential, will easily cope with such an order.

The possibility of such serial production and its volumes depend on the availability of the necessary components. According to The Military Balance 2021, Venezuela has 20 LAR-160 MLRS on AMX-13 chassis. In addition, 31 tanks of this type remained in service. The number of M40A1 guns in all versions is estimated at 175 units. Probably, a certain amount of equipment and tools may be in storage. 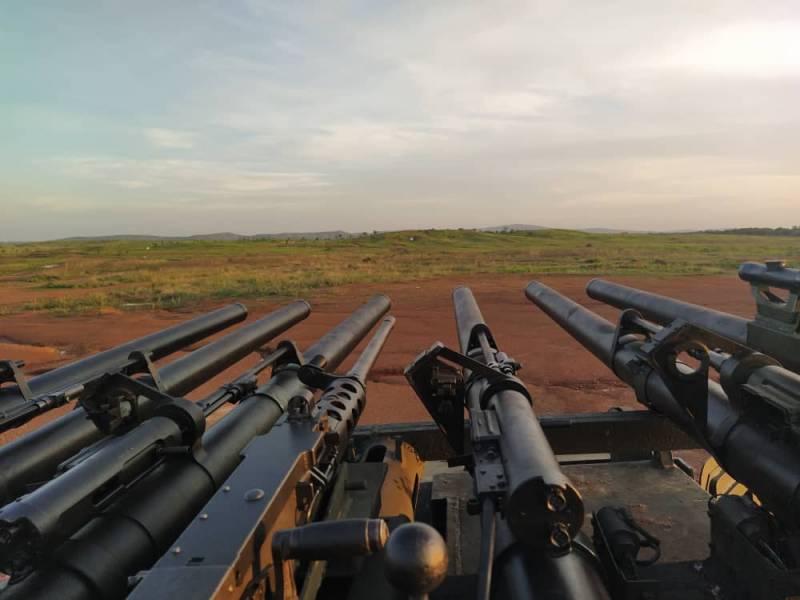 Main armaments and original sights
One way or another, using the available resources, the Venezuelan army can manufacture no more than a few dozen installations of a new type. The most probable is the volume of production up to 25-30 units. The assembly of more ACS is associated with issues of feasibility and feasibility.

The new Venezuelan self-propelled gun Maisanta YZR, built on the basis of obsolete components, is generally of interest - not as a modern model of a combat vehicle, but as a technical curiosity. Obviously, a self-propelled gun of this appearance has a minimum of advantages, which are accompanied by serious disadvantages.

The main advantages of the project are operational and economic. "Maysanta" allows you to keep outdated models of equipment and weapons in operation, while improving their characteristics and capabilities. So, the chassis of a light tank compares favorably with other carriers of the M40A1 by the presence of reservation and higher maneuverability. At the same time, the recoilless guns are at least as good as the standard AMX-13 in terms of their characteristics. 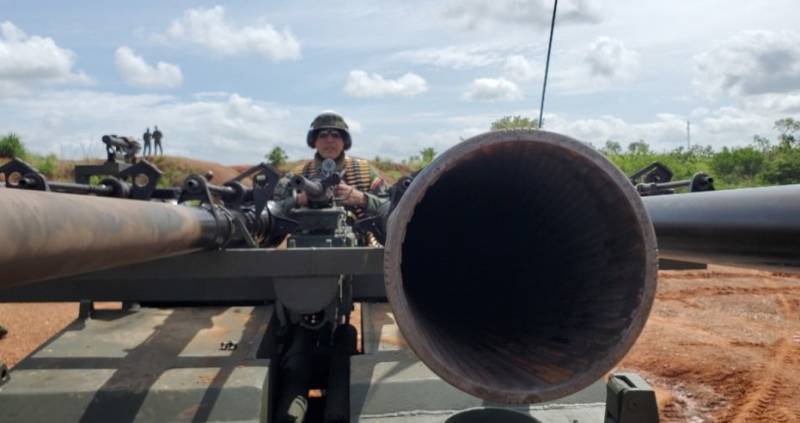 It is noteworthy that the M40A1 guns still retain some value. The fact is that Venezuela's neighbors, incl. potential adversaries generally do not have developed armies. Accordingly, their outdated armored vehicles can be vulnerable to modern 106-mm shells. Also, Maisanta YZR can not only fight tanks, but also solve other combat missions where outstanding penetration parameters are not required, etc.

Anti-tank missile systems could be a reasonable alternative for the M40A1 guns. However, with all their advantages, they are more expensive, which limits the possibilities of their purchase. In addition, the specificity of the potential theater of military operations does not justify their use. In a number of situations, 106 mm cannon shells are more beneficial in all respects.

However, congenital design flaws are able to neutralize even such advantages. The main problem of the Maisanta YZR project is that it is morally and physically obsolete long before its appearance. A light tank and a recoilless gun from the middle of the last century have long failed to meet current requirements in almost all respects. This will seriously complicate the operation and combat use of even the simplest targets. 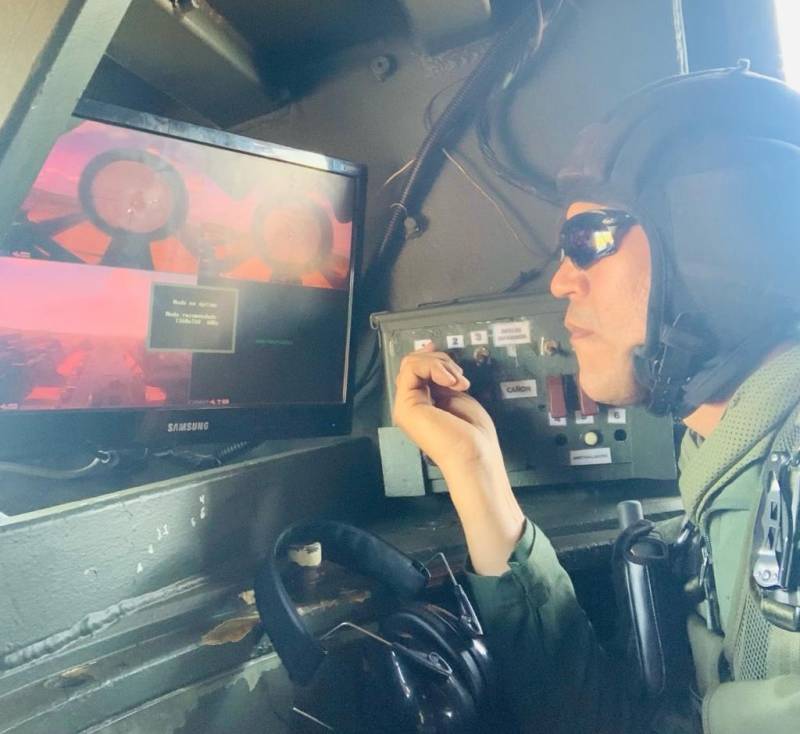 Operator at work
In addition, Venezuela does not have the ability to produce large quantities of Maysante. Even if production is launched, their total number will not exceed several dozen. Obviously, this will seriously limit combat capabilities and will not allow the very limited potential of the project to be fully realized.

The Venezuelan anti-tank self-propelled gun Maisanta YZR shows which new sample can be made from available components, incl. obsolete. The combination of the old chassis and equally new guns made it possible to obtain some new capabilities and increase certain characteristics, but the overall result of the project was far from ideal.

In general, the new Maysanta project shows how important it is to have your own defense industry. Without the production of armored vehicles and weapons, Venezuela is forced to seek help abroad, which is not always possible, or to engage in semi-handicraft projects. Both options, as practice shows, have their own problems and limitations.