What positive agenda does Russia meet in 2022? 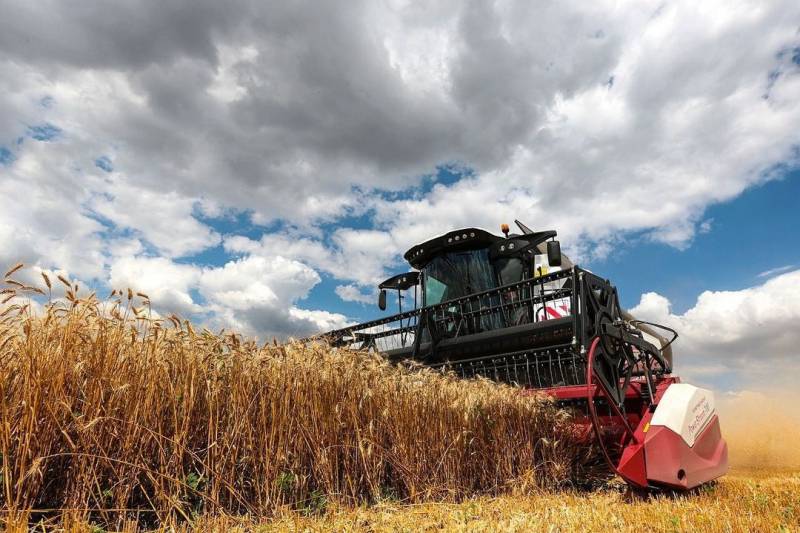 Grain - new Russian oil, photo: Ministry of Agriculture of the Russian Federation
For the past two years, the main newsmaker on the planet has been the coronavirus. The pandemic will not end in any way, more and more strains appear on the horizon, and news about covid has long been set on edge. Russia, like other countries, has fully felt the consequences of the pandemic.


For many, the last two years have been associated with personal tragedies, people are losing loved ones, the economy continues to stagnate, small businesses, especially catering, suffer losses. The rise in inflation directly affects all citizens of Russia, causing noticeable concern among the population. Yes, and on the borders of Russia in 2021, it was restless, and hotbeds of tension remained.

But even against this background, if you try, you can find positive moments in the life of the country.

In August 2021, Russia set a record for grain exports

In August 2021, 5,78 million tons of grain were exported from Russia, which became a record for this month for the entire observation period.

In many respects, the breakthrough in August was provided at the expense of Iran. Tehran purchased more grain in Russia in the first three months of 2021 alone than in the entire 2020.

According to the portal Prozerno, in early 2021 Iran overtook Egypt, moving to second place in the list of importers of Russian wheat.

The first place in this rating at the end of 2020 was occupied by Turkey, and in total Russia exports grain to 138 countries of the world.

In September of this year, the Ministry of Agriculture of Russia announced preliminary estimates of grain exports from Russia in the 2020-2021 agricultural year (started on July 1, 2021 and will end on June 30, 2022) in the amount of 49 million tons, including the supply of wheat - 37,6 million tons.

The export potential of Russian farmers in the agricultural year 2021–2022 is estimated by the ministry's specialists at 51 million tons. 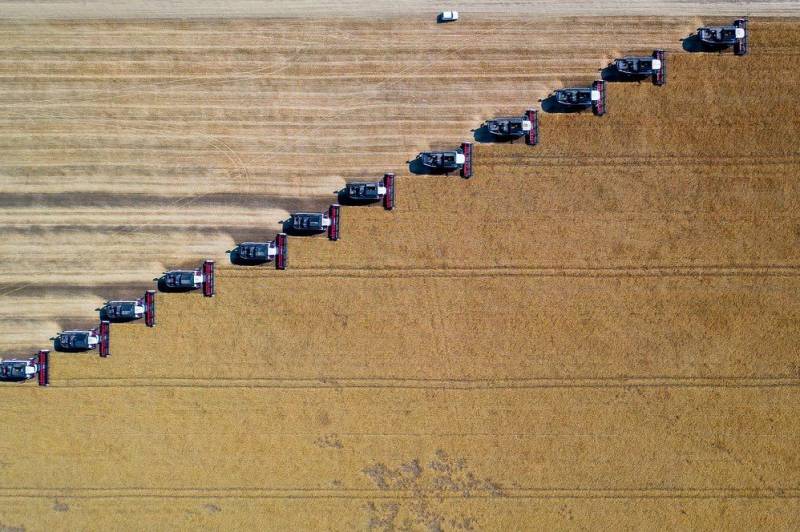 Grain harvesting in the Stavropol Territory, photo: Ministry of Agriculture of the Russian Federation
It should be noted that over the past five years Russia has firmly held the first place in the world in terms of grain exports.

For comparison: back in 2010, Russia ranked third in the world, after the EU and the United States, and now it steadily surpasses them in the volume of grain exports. At present, Russia accounts for a fifth of the entire world wheat market, which is of great importance.

In 2020, Russia showed a record growth in agricultural exports; agricultural products and foodstuffs worth $ 30,7 billion were supplied to various countries, which immediately exceeded the indicators of 20 by 2019 percent. Of these, $ 10 billion, according to RBC, were brought to the country by grain supplies. The record harvests in the country and the rise in prices for agricultural products in the world played a large part in these successes.

In 2020, for the first time in the entire post-Soviet history Russia exported more food abroad than it imported (in value terms).

The most important part of Russian agricultural exports in recent years has been grain. Foreign media also drew attention to this. For example, the British newspaper Financial Times called grain the new Russian oil.

In 2021, the first flight was made by the MC-21 with an import-substituted wing

At the end of the year, on December 25, the hope of the Russian civilian aviation - medium-range aircraft MS-21 with an import-substituted wing.

It is assumed that the Aeroflot group of companies will begin receiving production MC-21-300 aircraft in September 2022.

The total volume of confirmed orders for this aircraft is currently 175 aircraft, the main buyers are leasing companies controlled by the state.

In the world, the car will have to compete with modern passenger aircraft: the European Airbus A320 neo and the American Boeing 737 MAX (in Russia, this model is still not allowed to fly). 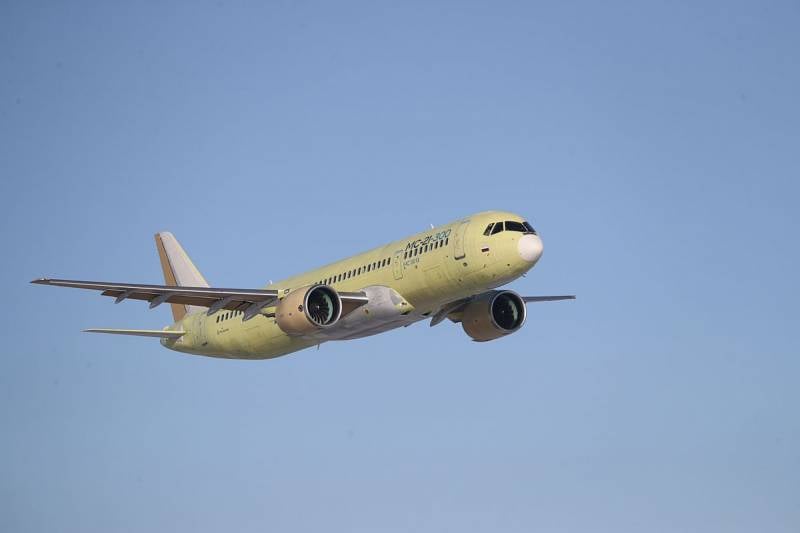 The first flight of the MS-21 with a Russian composite wing, photo: UAC
A distinctive feature and main feature of the MC-21 is the composite wing.

Rostec notes that the share of composite materials in the structure of the airliner is about 40 percent, which is a record figure for medium-haul passenger aircraft.

It was the wing that became the main problem of the project.

Initially, the supply of composite materials for the wing was to be handled by the American company Hexcel and the Japanese Toray Industries. In 2018, American sanctions intervened in the fate of the project, and Russia had to start import substitution in this direction.

As a result, the necessary composites were developed by the state corporation "Rosatom" with the participation of specialists from the aviation industry and scientists from Moscow State University.

The use of lightweight and at the same time strong composite materials allowed domestic engineers to develop a wing with a set of unique aerodynamic characteristics that are unattainable for a metal wing. At the same time, the improved aerodynamics of the aircraft made it possible to expand the fuselage of the MC-21, which will have a positive effect on the comfort of future passengers.

Import substitution of engines is next in line.

The MC-25-2021 airliner with a Russian composite wing, which made its first flight on December 21, 300, was powered by American PW1400G engines from Pratt & Whitney.

In the future, it is planned to equip production models with PD-14, while maintaining the possibility of installing PW1400G-Jm at the request of the customer.

The outgoing year 2021 has become a year of victories for Russian schoolchildren at prestigious international Olympiads.

According to Andrei Fursenko, aide to the President of Russia, in 2021, schoolchildren from Russia were able to win at all international Olympiads in natural sciences: their performances in physics, biology, mathematics, chemistry and computer science were successful. 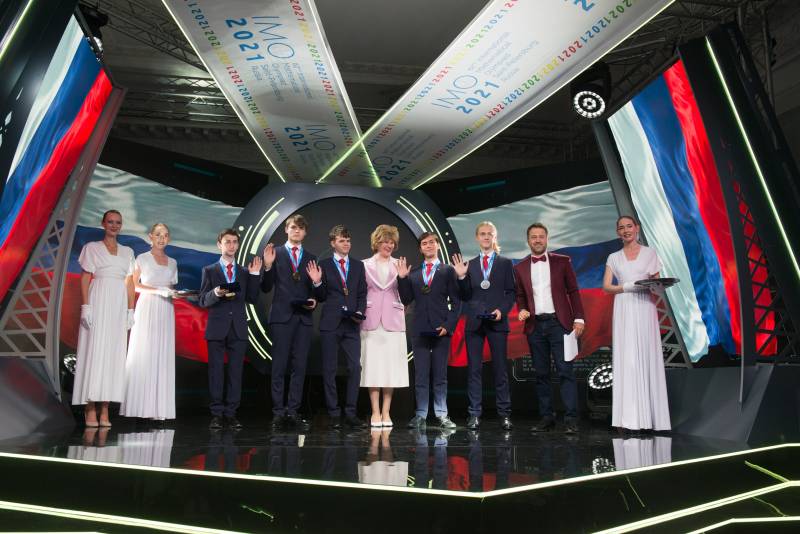 At the 62nd International Mathematical Olympiad, a team of schoolchildren from Russia won 6 medals: 5 gold and one silver, confirming the high status of the Russian mathematical school.

At the 51st International Physics Olympiad, which took place in Lithuania in 2021, a Russian team of five participants won five medals.

Hopes for a successful future of our country are directly linked to the development of education and the training of worthy personnel for the economy. The government has been working in this direction in recent years, trying to increase the prestige of Russian science and education.

In recent years, Russian science is getting younger, which is good news.

According to Fursenko, at present, the share of Russian researchers under the age of 40 is 44,3 percent. Since 2000, this indicator has grown 1,5 times, when young scientists under 40 accounted for just over 26 percent of scientific personnel.

At the end of 2021, Russia ranked fifth in the world in terms of exports of coronavirus vaccine.

This is an excellent indicator for the Russian science and pharmaceutical industry. The global coronavirus vaccine market was formed precisely in the second year of the pandemic, and our country was able to occupy its own niche in it.

Only China (with the largest population in the world), the EU, India and the United States produces and exports more vaccines from COVID-19 to Russia.

At the same time, in terms of vaccine exports, Russia also bypasses India, which spends most of the vaccines domestically to vaccinate the second largest population in the world.

According to the WTO and the IMF, in 2021 Russia supplied about 233 million doses of vaccine to the external and internal markets (2,3 percent of the supply of vaccines worldwide), including 93,4 million doses for export (this is 2,6 percent of global exports of coronavirus vaccines). 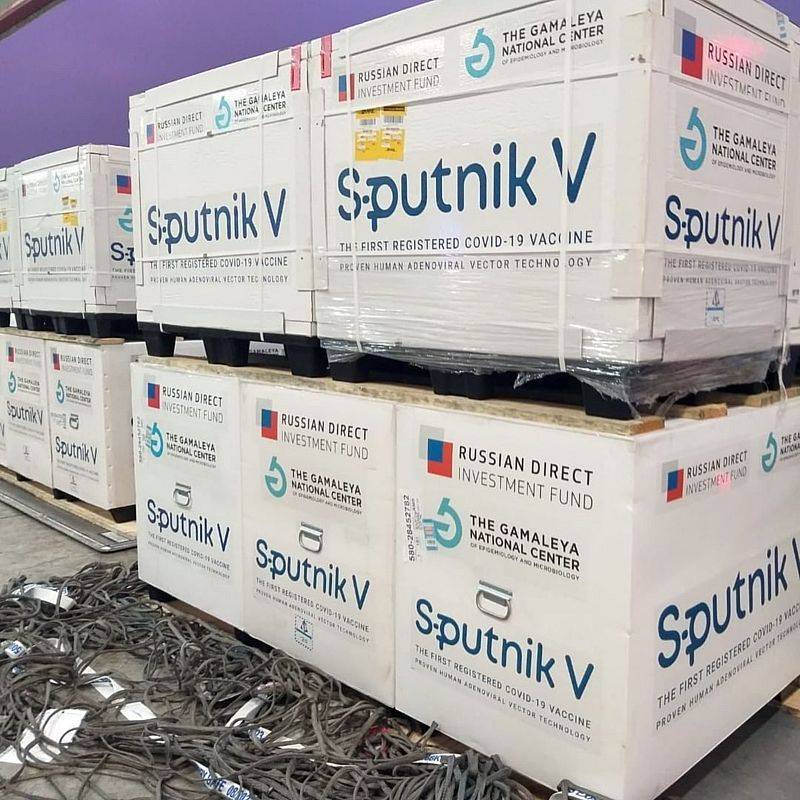 Russian vaccine against coronavirus "Sputnik V" in Mexico, photo: instagram.com/sputnik_vaccine
It is worth noting that the Federal Customs Service (FCS) of Russia does not carry out separate monitoring of the export of vaccines against coronavirus, but indirectly, the volumes of such exports can be presented under the column "other vaccines for humans", which includes "Sputnik V".

According to RBC, before the coronavirus pandemic, exports of this category of goods did not exceed $ 71 million per year. In the first 10 months of 2021, the volume of exports in this category reached $ 1,2 billion, the largest recipients were Argentina, Mexico, the United Arab Emirates and Kazakhstan.

Surprisingly, despite the fact that the Russian coronavirus vaccine appeared one of the first in the world and is quite successfully exported, Russian citizens are still in no hurry to get vaccinated.

In the outgoing year, the United Shipbuilding Corporation handed over a modern icebreaker Siberia to Atomflot.

This is the second Russian nuclear-powered icebreaker built according to Project 22220; the first vessel was the Arctic, which was handed over to Atomflot in October 2020. The third icebreaker under construction under this project, named "Ural", is planned to be handed over to the customer at the end of 2022.

For Russia, the development of a nuclear icebreaker fleet is of great importance, given the great importance of the entire Arctic for the country. The Russian Arctic regions have enormous economic potential. The reserves of oil, gas and other minerals available here will be able to ensure the energy and economic security of Russia for many years. 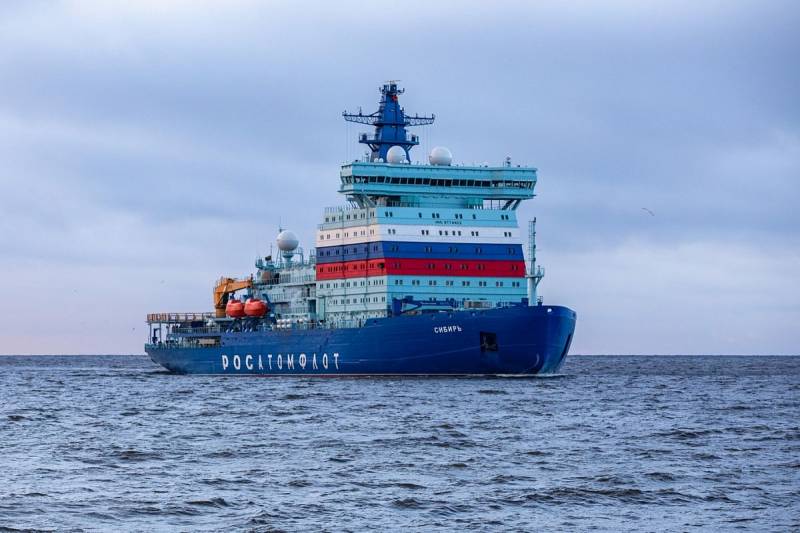 Nuclear icebreaker "Siberia", photo: USC
Project 22220 nuclear icebreakers of the "Arktika" type will help in the development of this region, as well as in the operation of the Northern Sea Route.

The icebreakers are equipped with a 60 MW nuclear power plant. In addition to servicing the NSR, they will guide scientific expeditions to the Arctic.

A feature of the icebreakers of this project is a variable draft, which makes it possible to equally effectively use these vessels both in deep-water areas and in the channels of Siberian rivers.

In the future, they will be able to replace both Project 10520 icebreakers of the "Arktika" type and icebreakers of the "Taimyr" type. The versatility will reduce the total cost of operating the Russian nuclear icebreaker fleet, while maintaining its capabilities at the same level.

In addition to the already mentioned icebreakers, the nuclear-powered icebreakers Yakutia and Chukotka are being built under Project 22220, and the laying of two more ships is planned, which have not yet received names.