Western expert on the situation in Europe 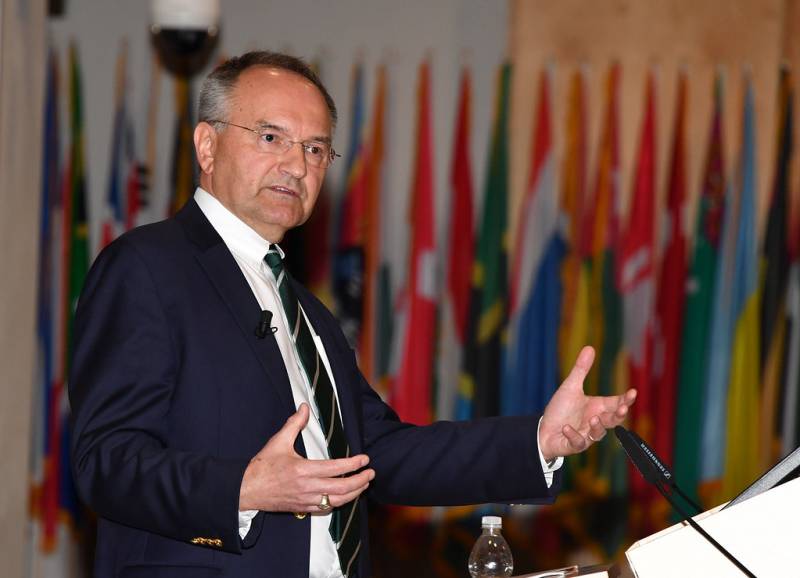 This material is a logical continuation of the previous article on the choice of Washington and the stakes in the negotiations between Russia and the United States, which, as it just became known, will take place on January 10 next year.

I will not build any logical conclusions today. It is enough just to quote and comment on what a well-known and authoritative Western expert says. The level of the majority of VO readers allows me to do this fearlessly.

So here are the views of Andrew A. Michta, Dean of the College of International and Security Studies at the George C. Marshall European Center for Security Studies and the new editor of the independent Internet publication 1945.

The article is titled How NATO Must Respond if Russia Invades Ukraine.

No, this is not a typo or a mistake by the author. This is the gist of Andrew Micht's material. Russia attacks and attacks. Repeatedly. I understand what the author of the text means. Crimea.

Only one thing is not clear, where, as a specialist, he saw the invasion?

What battles were the Ukrainian and Russian military fought?

"Amid ongoing speculation as to whether Russian President Vladimir Putin will launch yet another attack on Ukraine ..."
But for the author, for all his alleged love for Ukraine, the most important task is his own, European and American, fate. Will the US defend NATO's eastern flank? Yes exactly.

Ukraine is just a bargaining chip in world politics. However, like Europe.

In general, I got the impression that the author mentions the alliance only in the context of a fly from a well-known anecdote - "we plowed." Americans are gods who are able to protect everyone and everything. Europeans are just those flies on the horn of an ox.

Why are NATO members so concerned?

What was it that the Russian president suggested that terrified the author of the article?

The answer was given ... by President Putin when he spoke about the red lines that exist in Europe, from our point of view. The Alliance has no right to ensure its own security by diminishing our security.

“Judging by the volume of demands made by Russia in the two so-called 'draft treaties' with NATO and the United States, respectively, Moscow should have no illusion that they will be accepted as they will change Euro-Atlantic security by creating conditions that will undermine NATO's and America to work with its allies. "
But that is not all.

Moscow, according to the author, wants to deprive Europe of protection, in other words, is pushing the alliance to collapse. That is why it insults and humiliates poor Europeans and Americans with distrust. In particular, on the issues of joining the bloc of new members - Georgia and Ukraine.

“Putin knows that as long as he occupies Donetsk and Luhansk in Ukraine and Abkhazia and South Ossetia in Georgia, countries have no chance of joining NATO, since voting to expand the alliance would actually mean voting to go to war with Russia. Thus, Moscow's demand that the effective status quo be confirmed by a treaty is nothing more than an attempt to humiliate the West. "

Then the fun begins. Namely: the answer to the main question posed in the title of the article.

"A second Russian attack on Ukraine, if it happens, should serve as a long-overdue signal to the West that Russia intends to establish an exclusive sphere of influence in Eastern Europe and defend Moscow's claims to exercise influence in Central Europe, within NATO's perimeter."
To paraphrase military analyst Micht, Russia has no right to have interests!

Russia has no rights at all. Moscow can only silently listen to the claims of the EU and NATO and comply with all requirements. This insolence is the fruit of our policy of appeasement.

And here is Andrew Micht's humiliation of Europeans. What is called European armies today is actually just an imitation of the armed forces. Without the United States, Europe cannot exist as an independent union of states.

"... the best supporting outcome would be the rearmament of European NATO allies and an increase in the US military presence on the Eastern Flank, including permanent US bases in Poland and Romania."
The Europeans themselves must courageously ... "spend money not only on the development of real, implemented military potential, but also on strengthening the infrastructure throughout the continent."

Most importantly, European allies and NATO partners will need to show that they can reach a consensus in order to respond with meaningful sanctions, starting with disconnecting Russian banks from SWIFT and stopping Nord Stream 2.
In general, it is strange to read in the XNUMXst century an opus that would have been appropriate a hundred years ago.

On the one hand, there is the fear of Russia's military might and an understanding of the need for this country to develop its own economy, and on the other hand, the desire to make Moscow an obedient trained dog, ready to do anything for a piece of sugar.

One gets the impression that the EU has never learned to count losses.

Yes, this will cause some decrease in the growth of the Russian economy. How is it in Europe? IN USA?

How will payments for the same gas be made? For resources? For fertilizers and more?

So who needs gas? Western economy or Gazprom?

There are enough gas sales markets in the East. And the price is higher there. Today, it is the East that is most promising in the economic sense.

I understand that Andrew A. Michta really wants his country to flourish. The situation that makes it possible to actually control the whole of Europe, not only politically, but also economically, is very good for the United States. He finds it difficult to accept the fact that Europe can be an independent player. As well as the fact that Russia-2021 is not Russia-1991 for a long time.

Putin would choose Germany as his “preferred partner”, hoping that, using his energy weapon"Moscow will eventually be able to persuade Berlin to a" non-Bismarck "agreement that will effectively divide Europe into two spheres of influence, making the United States increasingly irrelevant to the overall strategic balance in Europe."
Again the notorious Nord Stream 2. Now it is no longer as dangerous for Ukraine as for US domination!

By the way, this is an answer to numerous questions about some maniacal desire of the United States to close a project beneficial to the EU.

Strengthening the role of Germany will return the division of Europe into supporters and opponents of Russia. Then the collapse of the EU will be a matter of the coming years. Michta predicts just such a final of European unity. At the same time, it is quite reasonable to refer to President Putin's statement of support for the PRC and the Chinese leader's response to support Russia and its interests in Europe.

Further - a complete whitewash of the American administration in the style of "everything that happens in the United States, the intrigues of Moscow and Beijing."

"This alliance has already presented America with a crisis on two fronts at a time when the country's resources were depleted by twenty years of counter-terrorism operations, pandemic, inflation and political divisions within the country."

We must understand the logic of the enemy

Finishing material is always easy. Everything has been said, thoughts were embodied in words and images. But in this case, this rule does not work.

The opinion of Andrew A. Micht is not the private opinion of one person, it is the opinion of a rather large and influential group of Western analysts and experts.

I don’t know if I was able to convey the logic of reasoning of the editor of "1945", but the essence, it seems to me, is clear. Western democracy must defend the democratic values ​​cultivated by the United States! Europe must choose between its own interests and those of America.

“We are rapidly approaching the point where the crisis in Eastern Europe, especially the fate of Ukraine, could decide Europe’s security and, as a result, its political future. What European governments do in the future will either reaffirm the interests and values ​​of Western democracies or be our greatest defeat since the end of the Cold War. ”
In other words, the current crisis in Ukraine should be viewed as a systemic crisis in international relations.

The Americans really want to preserve the position of the victors in the Cold War and the status of the world gendarme. But Russia, China, and a number of other countries, including the US allies in the EU, are no longer satisfied with Washington's tyranny.

The redivision of the world has already begun. And it is impossible to stop it.

Now you need to choose between the methods of this redistribution. Through negotiations or through another war.

People like Michta lean towards the military way. Again world war in Europe. And again by the hands of Europeans.

It is very important for us to understand the logic of the enemy. This understanding gives a chance for a successful confrontation in the event of a "hot" conflict ...