"Arch" from "Iron Horse": the safest in the world! 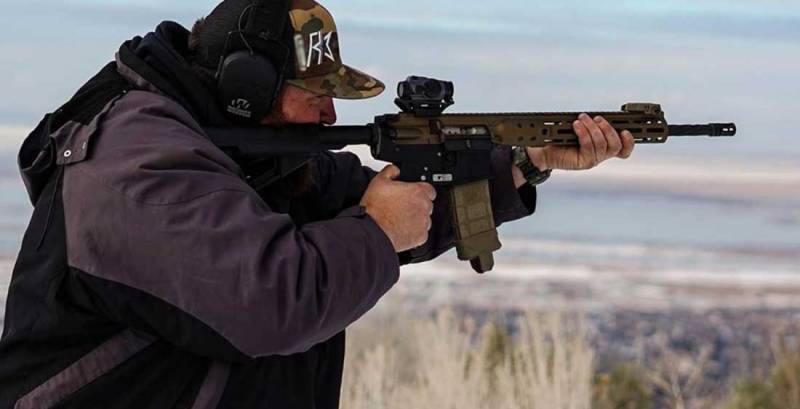 And the work of righteousness will be peace, and the fruit of justice will be peace and security forever.
Exodus 32: 17
Firms and weapon. So - safety. The idea of ​​security is as old as the world. And, of course, it has the most direct relation to weapons. Voennoye Obozreniye has already published articles describing attempts to make weapons safer, and the commentators were not stingy to share their memories of their own experience, when weapons became extremely dangerous, primarily for those who used them. The author of this article also has such experience.

And it so happened that back in 1974 he and his comrades celebrated the New Year. And one of them brought with him ... a .22 caliber Walter PPK pistol that his father had. Can you imagine what it meant to pick up such a pistol in the USSR at that time? We drank, ate delicious food and went to shoot bottles from it at the city cemetery, rightly judging that someone who, and the deceased, would not report us to the police! We shot, rejoiced, and then hurried back to the table. And the one to whom the owner of the pistol entrusted to hold it, did not put it on the safety catch, and ran up the stairs with it in hand, and we are all "boys and girls" after him. And, apparently, through negligence, he pulled the trigger. Flame flashed under his feet, crashed and screamed - vh-u-zzz. Apparently, the bullet ricocheted and only by some miracle did not hit any of us! Oh, how scared we were then!

So the problem of the safety of weapons was, is and, apparently, will still be. There are a lot of wonderful, truly cases. My friend, a hunter, threw his gun behind his back and sat down behind a bush. A shot rang out, and all because the twig fell under the trigger guard and ... pressed it completely by accident. And there are many such examples. Including fatal ones. So it is not surprising that the American company "Iron Horse", which means "Iron Horse", took care of creating another "arch", which would not have a trigger ... at all! Interestingly, the idea of ​​a trigger or thumb button instead of the traditional index finger trigger in stories firearms arose repeatedly. And the first key-release rifles appeared in Europe a very long time ago. Back in 1870, an Italian rifle with such a trigger for the 11mm thumb was released, created by Glisenti-Pieri from Brescia. 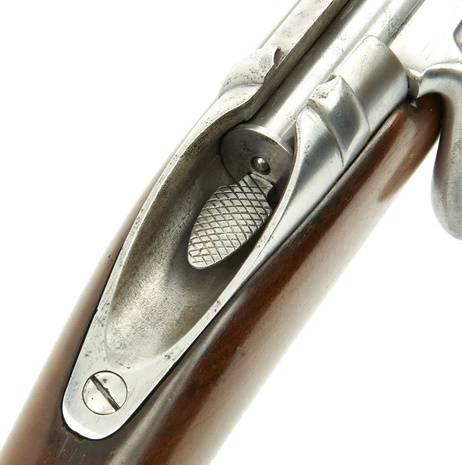 Here is the trigger of a model 1870 rifle. Photo by Iron Horse
Winchester, for example, produced more than 70 key-release rifles designed by Thomas Bennett, based on his patent No. 000 of February 14, 1905. As you can see, it was extremely simple. And it was used mainly for recreational shooting, including shooting ranges. The rifle fired .782716 rounds and was very cheap at just $ 22. By the way, such a low price just turned out to be possible due to the simplification of the trigger mechanism ... 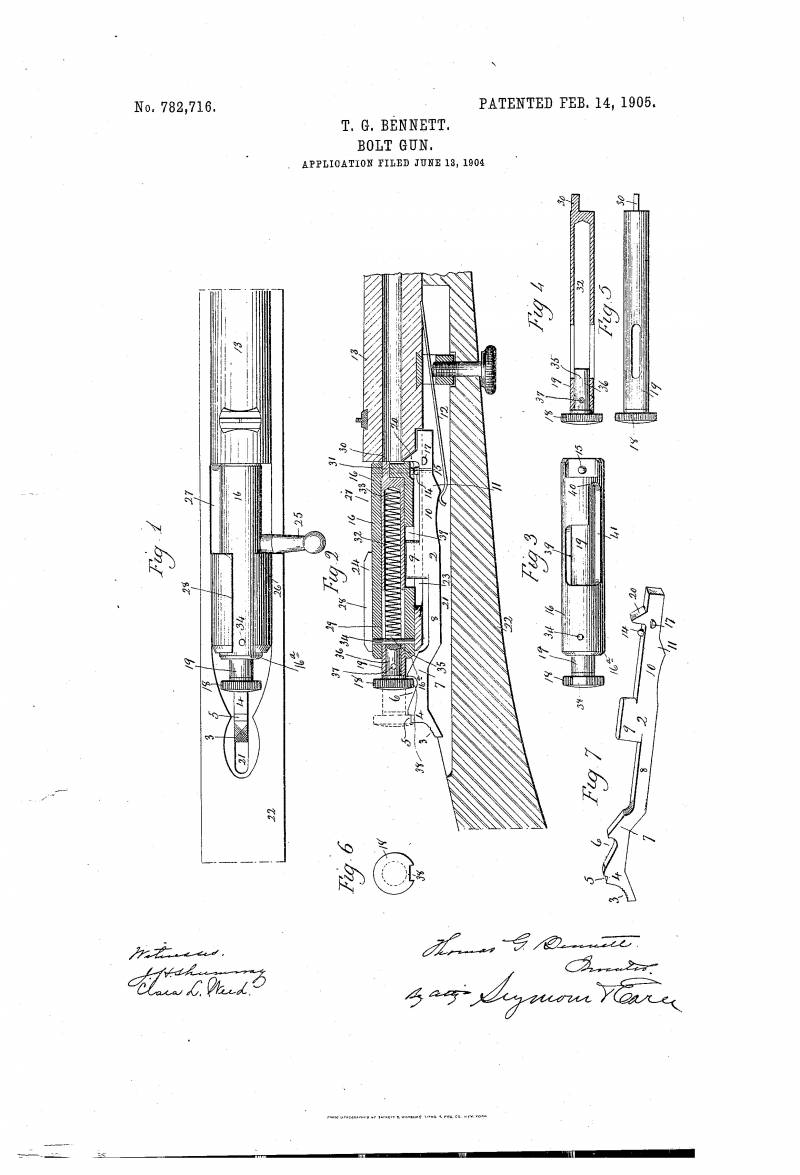 Design by Thomas Bennett. Drawing from US patent dated February 14, 1905 # 782716
And now the very latest interpretation of this idea has appeared: the TOR rifle. By the way, "TOR" is just translated as "thumb-operated rifle." The company emphasizes that, like all other "arches", it is easy to use, but its trigger has been replaced by a button located at the back of the grip, but it is operated with the thumb of both the right and left hand. You don't need to rearrange anything here! It is assumed that such a solution will improve shooting accuracy even in cold weather, and in addition, people with disabilities who do not, for example, have an index finger, will be able to use such a rifle.

Let us recall once again that traditional triggers are located at the bottom of the receiver (receiver), and they are pressed on with the index finger of the “working” hand. The TOR release button on the back of the receiver is activated with your thumb. That is, you hold the rifle by the pistol grip in the same way as the usual "arch", but stick your thumb between the two walls of the lower receiver and already there, inside, press the trigger. This area is protected by the receiver on both sides and from above. You can only access the release key from one direction. When the weapon falls, it cannot touch it for anything, no branches between the trigger and the fence bracket can also get in, in a word - the safety of such a weapon immediately increases significantly! As conceived by the manufacturer, such a system also provides a more uniform and smooth descent, in which the aiming of the weapon does not get lost due to the movement of the index finger in the horizontal plane, which is done in conventional rifles. There are now three models of Iron Horse rifles ranging from $ 850 to $ 2300, and a simple trigger box will cost $ 295.

It looks like a very ordinary AR-15 rifle. However, take a closer look: something is clearly missing in it! And what exactly? Well, of course, the trigger!
Iron Horse Firearms, LLC has now undergone a rebranding so that all of its firearms are now known as Blackwater Worldwide.

With a new design like the TOR, not all parts will be 100% compatible with other AR-15 rifles. It is clear that the TOR uses a new fuse and pistol grip, and changes have also been made to the trigger. However, the rest of the lower receiver, including the buffer tube assembly, has not undergone any changes. That is, the new rifle is compatible with any military-grade cartridges and magazines.

By keeping the trigger in line with the bore, Iron Horse Firearms suggests that the TOR can reduce the rifle's swing to the left or right, which is a particular problem with conventional trigger rifles.

And this is how the new trigger affects the accuracy of the new rifle. Of course, this is a promotional photo. But ... "there is no smoke without fire." And then - unfair advertising in the USA is a dangerous thing! Photo by "Iron Horse"
Another factor that can improve thumb-activated descent is the decrease in shooting accuracy associated with low temperatures affecting the dexterity of the shooter's fingers. If you've ever shot in cold weather, you know that joints and fingers can get stiff. Pressing a key with your thumb can counteract this unpleasant circumstance. There are people with arthritis who, nevertheless, still want to shoot, so this rifle will allow them to participate in shooting sports on an equal basis with others. And besides, it will also provide them with the opportunity to use the rifle for self-defense if they ever meet with a cruel criminal.

By the way, it is interesting how the idea of ​​this design was born. Its origins are explained by company owner and founder Ryan McDonald, a veteran of the United States Marine Corps:

“On a cloudy August day, I sat on the LAV hull and thought about the various weapon platforms while listening to what the other Marines had to say. I gave them my idea for the AR15 modification. This led to a conversation with my mates about how to improve it and why no one has done it so far. It was then that I decided that I would definitely try to implement my idea. And now, after almost two years, many ugly handcrafted prototypes, countless days at work, and many failures, I am happy to announce that TOR is finally available. " 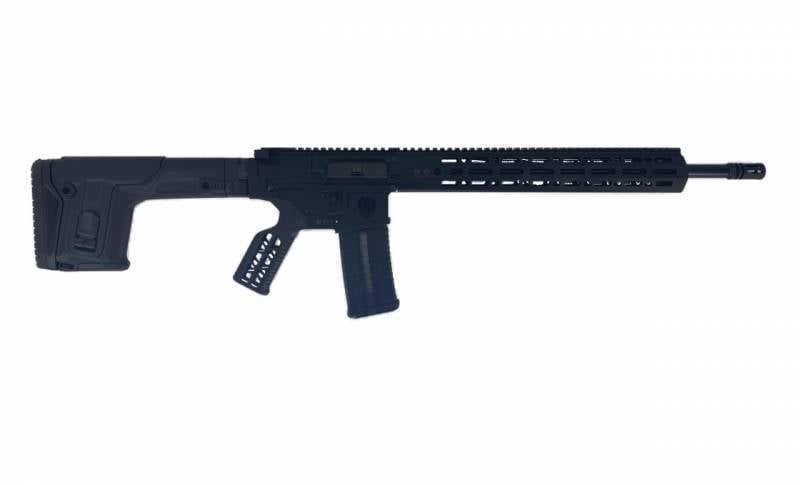 Here it is: the black TOR rifle. Photo by "Iron Horse" 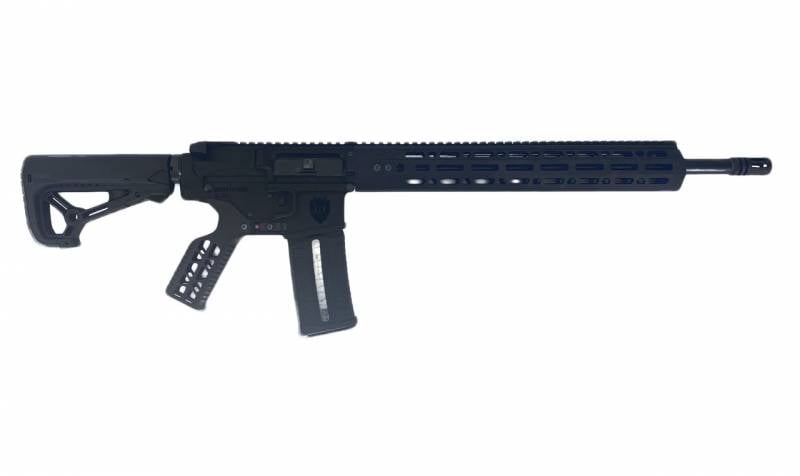 And this is her, too, but with a different butt. Photo by "Iron Horse"
Today the TOR is a 5.56x45 mm NATO semi-automatic rifle with a 16 '' (406 mm) barrel. Its trigger box (the Americans call this part the lower receiver, respectively, the receiver is the upper receiver) is made of 7075 TOR aluminum with a black anodized coating of the Aero Precision AR15 Gen 2 receiver and the Aero Precision ATLAS S-ONE forend. The TOR 5.56mm rifle is priced at $ 1350. 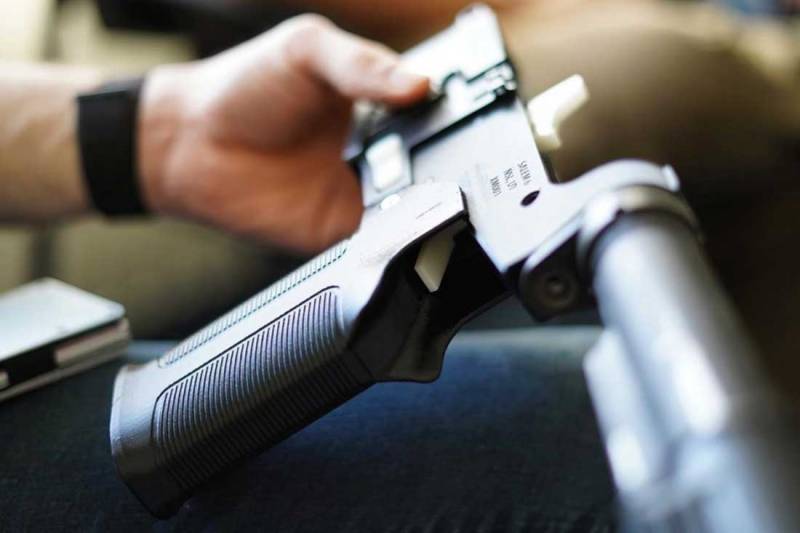 There she hid this release key - there! Photo by "Iron Horse" 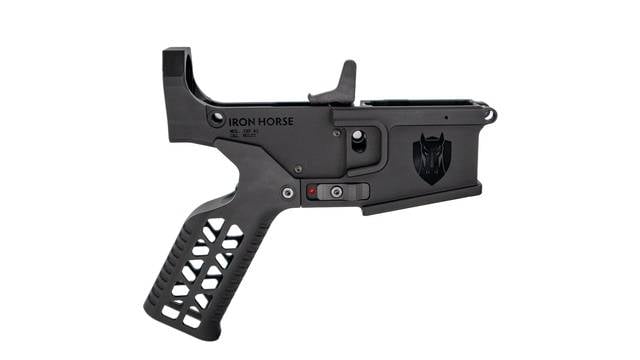 And here is the handle together with the lower receiver for this rifle. Photo by "Iron Horse"
It is difficult to say how popular this system will be. Although developments like TOR appear today one after another. For example, the Italian company Tecnostudio Engineering is working on a pistol based on the same concept. Her latest creation is an innovative polymer semi-automatic pistol with ... no trigger! In fact, there is a trigger, only it is controlled by the thumb, not the index finger, like all competitors. 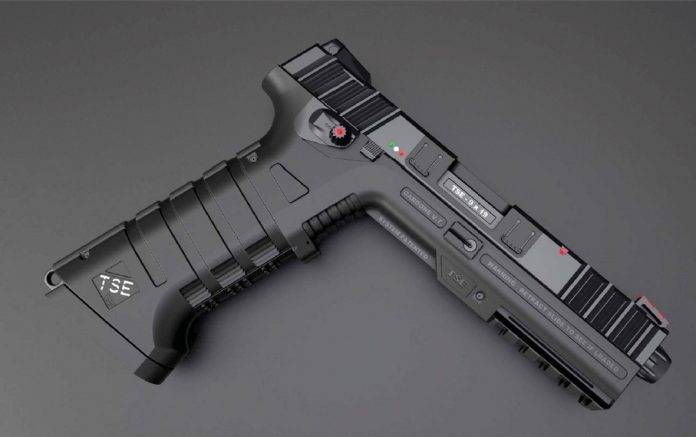 An innovative pistol from Tecnostudio Engineering. Photo by Tecnostudio Engineering
First of all, the thumb trigger system has yet to prove its effectiveness in the field, and even if it is effective, it may simply be inconvenient for the military for some completely random reason. Nevertheless, the innovation and boldness of this idea cannot be denied!