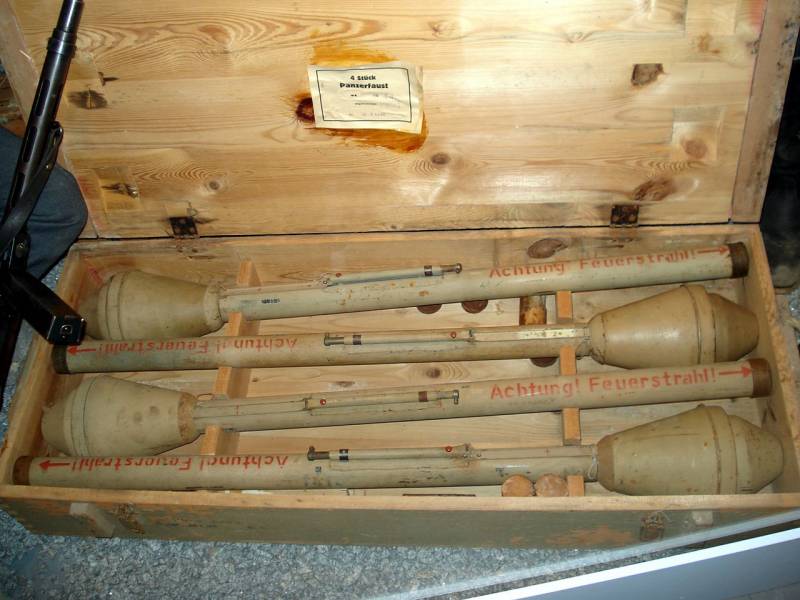 Crate with Panzerfaust grenade launchers. Photo Wikimedia Commons
In the last months of 1943, the troops of Nazi Germany began to use the first rocket-propelled anti-tank grenade launchers of the Panzerfaust series at the front. According to the plans, this weapon was supposed to strengthen the infantry and become almost the main anti-tank weapon. However, not the highest tactical and technical characteristics seriously limited the practical use of such weapons - and it did not cope with the hopes that were placed.

Development of the Panzerfaust began in 1942 and was completed the following year. Soon, the troops received the first serial products Faustpatrone 1. Later, the improved Panzerfaust 30 went into production. The first cases of the combat use of such weapons on the Soviet front date back to the end of autumn of the same year. In the fall of 1944, the first Panzerfaust-60 products were sent to the troops, and at the end of the year, the production of the next modification with the index "100" began. In the last weeks and months before the surrender, they managed to release a small number of Panzerfaust 150 grenade launchers. The Panzerfaust-250 was also developed, but they did not have time to establish its production.

In about a year and a half of serial production, the German industry managed to produce at least 8,2 million disposable grenade launchers of all modifications. The Panzerfaust 60 version became the most popular, occupying an intermediate position in the family. Weapons were actively distributed between army units, and from a certain time were supplied to the militia. 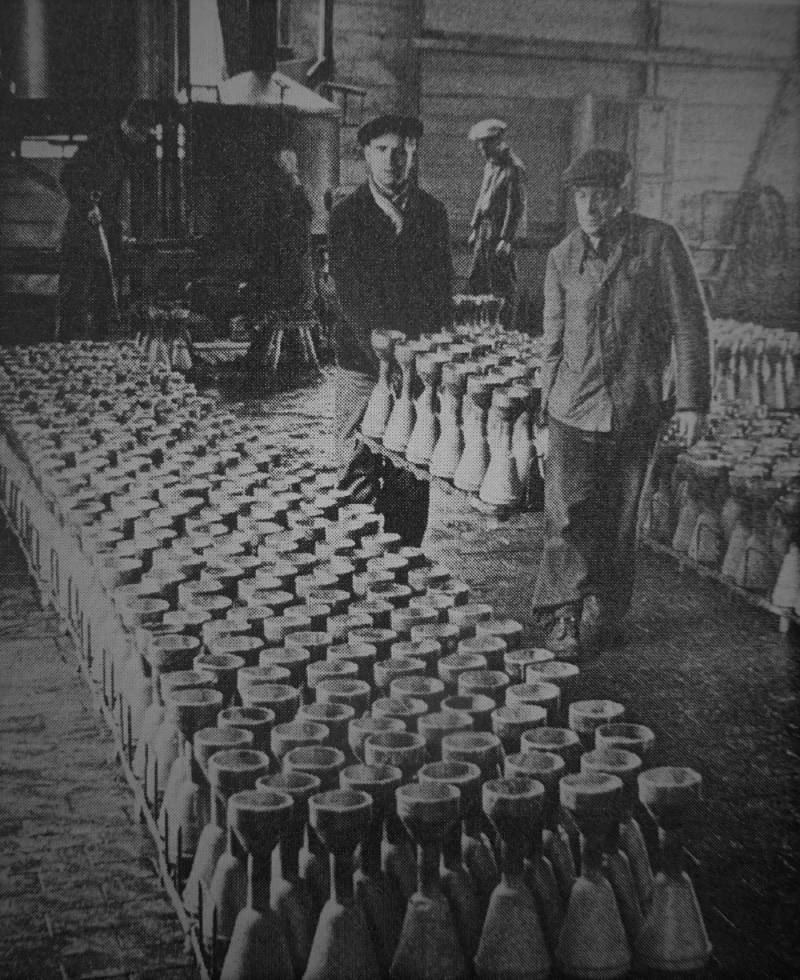 Making pomegranates for Panzerfaust. Explosives are poured into empty housings through funnels. Photo Waralbum.ru
Anti-tank grenade launchers were actively used on all fronts, and German troops constantly reported on the next success of such a "miracle weapon" in the fight against enemy tanks... At the same time, "Panzerfaust" regularly became trophies of the Allies and also found use. At the same time, there were ambiguous assessments.

All products of the Panzerfaust family used a common architecture, but had some differences that provided a difference in combat characteristics. Such differences were achieved mainly through the gradual modernization of the cumulative grenade with the refinement of its various components.

The first version of the grenade, used with the Faustpatrone 1 product, had a 100 mm warhead with a shaped charge weighing 400 g. The 70 g propellant charge provided an initial speed of only 28 m / s and an effective range of up to 30 m. obstacle - 140 mm. 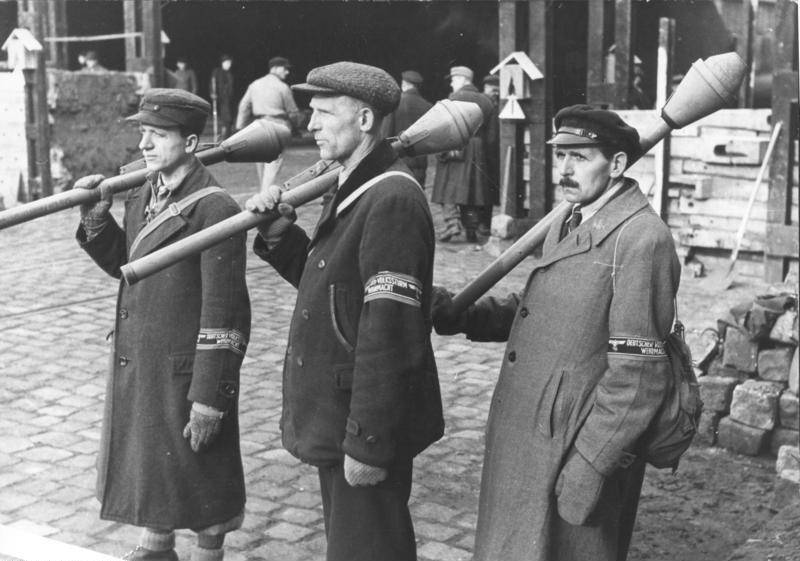 Soldiers of the Berlin "Volkssturm" with grenade launchers. Judging by their faces, the characteristics of the weapon are not impressive. Photo of the Bundesarchive of the Federal Republic of Germany
In the Panzerfaust-30 modification, a new grenade was introduced with a reinforced warhead with a diameter of 149 mm and a penetration rate of 200 mm. The increase in the mass of the ammunition was compensated by an increase in the propellant charge, and the ballistic characteristics remained the same. The following grenades, such as Panzerfaust 60 and Panzerfaust 100, remained generally the same, but due to the enhanced propellant charge, the effective range increased to 60 and 100 m, respectively.

The last serial modification, "Panzerfaust 150", received a fundamentally new grenade with an improved charge and a caliber of 106 mm. Despite the smaller dimensions and weight, the penetration rate exceeded 280-300 mm. In addition, the lightweight grenade accelerated to 80-85 m / s and flew 150 m.

Grenade launchers at the front

From the end of 1943, Panzerfaust products of all versions were actively used on all fronts. They were seen as a more effective replacement for hand-held anti-tank grenades and as an addition to anti-tank artillery. Great hopes were pinned on such weapons, but on the whole they did not justify them. According to both German and foreign estimates, the overall effectiveness of the grenade launchers was significantly lower than other anti-tank weapons. 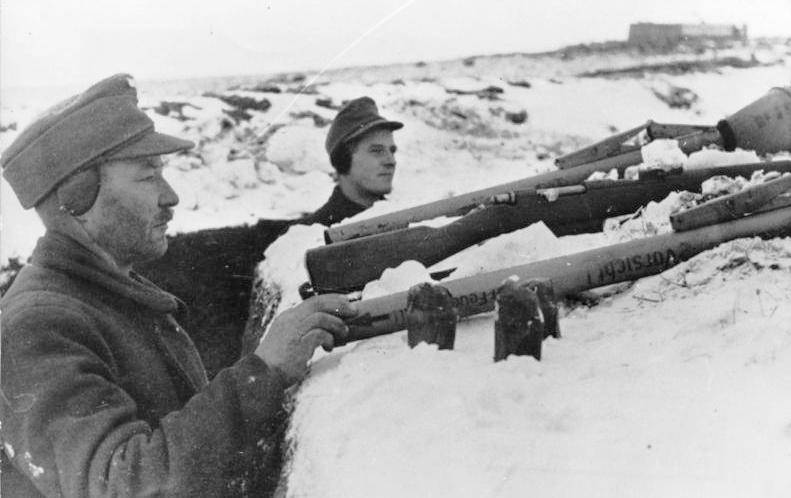 German militias in position. Whether it will be possible to hit and hit the tank is a big question. Photo of the Bundesarchive of the Federal Republic of Germany
The Red Army quickly noticed the emergence of new weapons from the enemy and took the necessary measures. The damaged vehicles were carefully studied, and measures were taken to capture captured grenade launchers for subsequent tests. Later, as the offensive progressed, the Red Army more and more often got hold of the Panzerfaust abandoned by the retreating enemy - and actively used them.

Rocket-propelled grenade launchers were intended to combat tanks in different conditions, including. in open spaces during combined arms combat. Practice has shown that in such a situation Panzerfaust shows very limited results. In urban conditions, such weapons worked better, but there was no fundamental difference. At the same time, new modifications with improved characteristics did not generally change the current state of affairs.

The low efficiency was reflected in German documents. For example, in February 1944, German troops announced the destruction of more than 1200 Soviet tanks and self-propelled guns. Moreover, only 35 applications mentioned "Panzerfaust" - only 3%. If we take into account the specifics of such statistics and the peculiarities of accounting for other people's losses, then the real results could be even lower.

Similar statistics took place on the Soviet side. Thus, the historian A. Ulanov, in his article “Panzerfaust, the Almighty,” mentions the results of the operation of the 8th Guards Army, Colonel-General V.I. Chuikov in March 1945 Due to various objective factors and difficulties, in just three days the army lost 122 tanks and self-propelled guns. 98 armored vehicles were destroyed by artillery, and only 7 units were used by grenade launchers. or less than 6% loss of equipment. 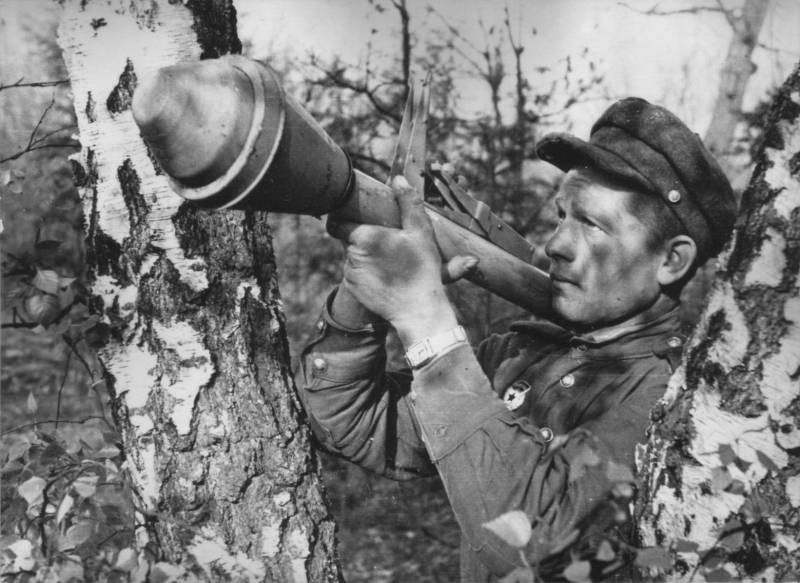 Trophy Panzerfaust in the Red Army. Photo Waralbum.ru
Other characteristic information relates to the results of the work of the 2nd Ukrainian Front in February 1945. During the month, there were 160 combat damage to tanks and self-propelled guns, and only 2 were caused by Panzerfaust. Not only the number and proportion of such damage is noteworthy, but also their nature: one T-34 tank smashed a caterpillar, and the second one cracked its frontal armor from being hit. After the repair, the cars could return to service.

In the spring of 1945, the main battles took place in urban areas, in which grenade launchers are believed to be able to fully realize their potential. Indeed, the Red Army had to take special measures to protect armored vehicles from ambushes and other threats. However, the general statistics on the use of Panzerfaust again did not meet the expectations of the Nazis.

In a series of articles by Yu. Pasholok "Theory of armored delusions", the losses of the 1st Belorussian Front in April-May 1945, during the Berlin operation, are mentioned. So, in April, the front armored vehicles completed 20378 tank codes (the sum of days of combat operation of all vehicles). Damage received 3781 units. equipment, of which 911 had to be written off. German grenade launchers damaged 269 armored vehicles and destroyed 165 of them. Accordingly, cumulative grenades accounted for approx. 7% damage and 18% loss. The bulk of the losses (1846 in total and 719 irrecoverable) were again provided by enemy artillery. 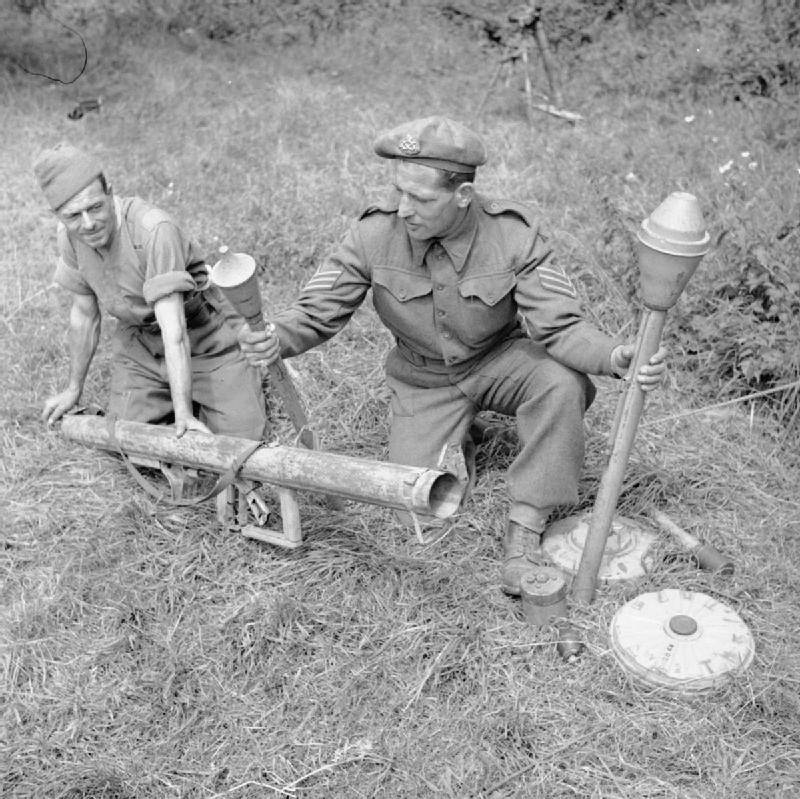 The British are studying captured anti-tank weapons. Photo by IWM
In early May, before the end of the fighting, the front completed more than 1200 tank guides. Combat damage received 275 HP. equipment, incl. 50 went into irrecoverable losses. At the same time, the Panzerfaust damaged 42 vehicles (15% of all damage) and destroyed 20, i.e. 40%. These were almost the highest results of grenade launchers during the entire war. However, even in this case, the leading role in the anti-tank defense remained with the artillery. Thus, even in optimal conditions of combat use, the performance of grenade launchers remained limited.

German rocket-propelled grenade launchers immediately interested the Red Army. At the top, discussions began on the need to develop and produce their own weapons of this class, and at the front they tried to get captured samples and use them against the former owners.

It is known that the Red Army soldiers used Panzerfaust in the original role of anti-tank weapons. It was more effective than hand grenades, but limited ballistic performance made itself felt. In addition, by the time the first captured grenade launchers appeared, our main problems with anti-tank artillery had been resolved, and the need for manual weapons had decreased.

With all this, "Panzerfaust" showed itself as a good engineering weapon. Grenade launchers were used to suppress and destroy firing points, make passages in buildings, etc. In such situations, the limited range and accuracy of fire did not have a negative impact and made it possible to solve the assigned tasks. 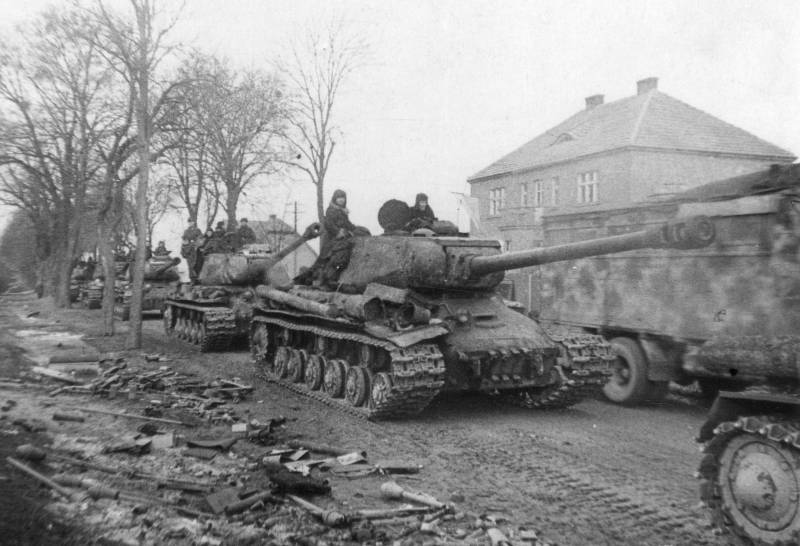 Soviet tanks IS-2 in East Prussia. Panzerfaust grenade launchers are left on the sidelines and no longer pose any danger to them. Photo Waralbum.ru

According to various estimates, Panzerfaust grenade launchers were progressive weapons for their time. However, they failed to meet the expectations and demonstrate high performance indicators. In addition, such weapons showed the best results when used in an abnormal manner. Several prerequisites related to design, organization of use, etc. led to such results.

The main problem of the Panzerfaustos was their low ballistic characteristics, first of all, their short firing range. Even the Panzerfaust 100, which had 200 g of a propellant charge, could only throw a grenade at 100 m. This was due to the relatively large mass of the grenade and the overly simple design of the launch tube. The grenade launcher did not have a rear nozzle or counter-mass, which is why a significant part of the energy of the powder gases was wasted and was not transferred to the ammunition.

The grenade launcher had extremely simple sights that limited the accuracy of the fire. This problem was aggravated by the specifics of production. Product quality 1944-45 often left much to be desired, and accuracy suffered in the first place. At the same time, the loss of accuracy did not allow realizing the potential of a sufficiently powerful warhead, theoretically capable of hitting any Allied tanks. 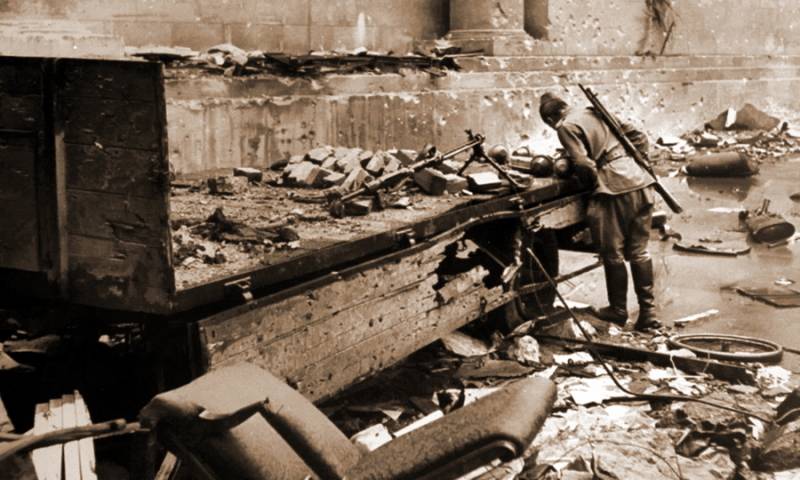 Red Army soldier and trophies. Photo Warspot.ru
Finally, the methods of using grenade launchers became a negative factor. The Germans used the Panzerfaust in its original role as an anti-tank weapon, and in most situations its characteristics were insufficient for this. Risks for grenade launchers reached their maximum level, and the effectiveness of firing fell. At the final stage of the war, such weapons were issued to the militia with minimal training - and the results were predictable.

Thus, the German Panzerfaust grenade launchers, produced in a large series, were widely used on the fronts of World War II and even left their mark on it. stories... However, this trace cannot be called unambiguous. Despite the presence of certain advantages, this weapon faced difficulties and problems that negatively affected its combat use.

As a result, "Panzerfaust" and other, more successful, hand-held anti-tank systems of German design did not have a noticeable effect on the course of the war and did not save Hitlerite Germany from defeat and surrender. During the war and after its end, the victorious countries carefully studied all captured samples, developments and technologies. They did not copy or develop the German grenade launchers, which again confirmed their low potential.