How the US Navy Aircraft Carriers Changed: Lessons from the Desert Fox 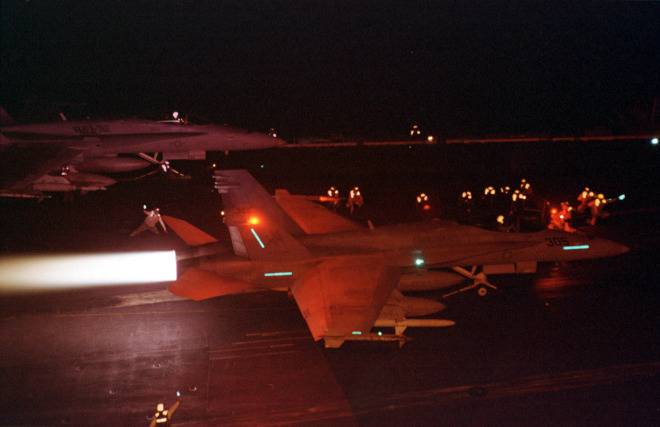 A US Navy F / A-18 Hornet of 105th Attack Fighter Squadron prepares to take off from the deck of the USS Enterprise during Operation Desert Fox. Photo source: NavalHistory.org
“The United States and Britain have taken military measures to pressure Iraq using various land and sea-based military means, as well as the use of Tomahawk cruise missiles, according to the Pentagon's official data.

Sources tell CNN that more than 200 cruise missiles have been fired at targets in northern and southern Iraq, as well as in the Baghdad region.
The military operation began at 17:00 pm ET Wednesday (22:00 pm GMT / 1:00 am Thursday in Baghdad).
General Hugh Shelton reported that US Navy carrier-based aircraft took part in the attack. aviation ground-based both the United States Air Force and the Royal Air Force operating from unspecified bases in the region. The cruise missiles were launched both by the US Air Force B-52 bombers and from the US Navy ships at sea ... "
- excerpted from CNN's article Pentagon unveils details of Operation Desert Fox. December 16, 1998 release.

In the aftermath of Desert Storm and Operation Force Deliberate in Bosnia, the United States navy underwent a series of reforms designed to increase the tactical flexibility of carrier-based aircraft, as well as to deal with a doctrinal crisis caused by a sharp shift in priorities. The largest and most powerful fleet in the world, which had been preparing for naval battles with an enemy equal in strength for decades, had to adapt to new realities - large-scale local conflicts.

In previous operations, carrier-based aircraft faced many problems, both tactical, logistic and organizational. "Desert Storm" and "Deliberate Force" demonstrated a huge number of shortcomings that no one had previously considered. The fleet suffered from poor tactical planning (it was simply not ready for massive strikes against ground targets, and the Air Force was literally ahead of it), did not have its own tankers and, with a screeching noise, established interaction with Air Force air tankers.

The deck pilots did not have sufficient training to conduct strike missions at night - and, frankly, their aircraft were not prepared for this. There was a critical shortage of high-precision weapons, situational awareness systems, as well as capabilities for conducting reconnaissance at the operational-tactical level.

The fleet was built in the realities of the naval war of the 80s: it was preparing for anti-submarine operations, offensives and rapid maneuvers on ocean communications and repelling attacks by Soviet missile carrier regiments. But the 90s showed that fighting is transforming - and the fleet it was required to step in step with these changes.

So, with what large-scale innovations did the US Navy's aircraft carriers embark on Operation Desert Fox?

First, the Challenge Athena satellite communications system with a high data transfer rate was introduced to aircraft carriers. Oddly enough, but the fleet had serious problems with satellite communications - this limited both its interaction with the Air Force and the ILC, and with its own forces, including with carrier-based aircraft. Challenge Athena, on the other hand, made it possible to transmit even large volumes of photo and video materials using the power of a commercial satellite network.

In addition, the fleet received an updated tactical automated mission planning system (TAMPS) - this made it possible to significantly increase the efficiency of strike operations due to the high speed of processing intelligence and distributing tasks between aircraft.

Before the modernization of TAMPS, pilots downloaded maps with flight missions immediately before departure, and by 1998 each aircraft could receive them directly in the air (including the merit of the introduction of satellite communications) - moreover, on-board computers issued full-color maps, the quality of which was equivalent to tactical aerobatic charts and operational navigation charts produced by the Department of Defense Cartographic Agency!

Second, the Navy launched a WTI program to enhance the exchange of skills and experience between carrier and air force pilots. Something similar existed in the 80s in the form of the Strike University program, launched after the operation in Grenada - then the Navy also faced a serious lack of qualifications for its pilots, but the SU operated for only five years.

After the events of Desert Storm, the fleet largely standardized its tactical training program with the US Air Force - and this had a beneficial effect on the results of the combat work of carrier-based aviation, and subsequently grew into the formation of a unified tactical training system Air Combat Training Continuum.

Thirdly, the approach to the recruitment of carrier-based aviation squadrons, their armament and equipment has seriously changed. As it was repeatedly mentioned in previous materials, already in 1992, the fleet began active purchases of high-precision weapons (it should be noted that along with this, the fleet also purchased large quantities of laser-guided training bombs), and also got rid of the outdated A-6 Intruder attack aircraft.

But there were many problems with other aircraft, in particular, with the heavy F-14 Tomcat interceptors. The F-14 was an excellent aircraft, but its main tactical niche during the Cold War was the fight against attacks by Soviet Tu-22M missile carriers. The Navy never considered it as a vehicle for striking ground targets - in theory, of course, it was possible, but in practice Tomcat did not even have sets of aiming equipment for bombing. The F-14s took a formal part in Desert Storm, but did not perform strike missions - they needed modernization, and they got it. 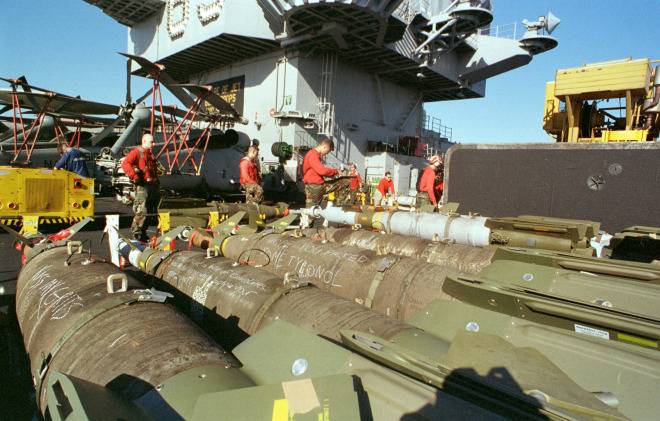 Preparing ammunition on the deck of the aircraft carrier USS Enterprise. Operation "Desert Fox". Photo source: NavalHistory.org
Immediately after the end of the Gulf War, the F-14 crews underwent additional training, and a module for low-altitude navigation and infrared guidance for night flights called LANTIRN was integrated into the aircraft themselves.

One of the most important innovations was the complete modernization of the aircraft fleet, sharpened for night strike operations. Prior to Desert Storm, naval aircraft could only engage in fighter night battles, but by 1998 that had changed with the F / A-18 Hornet getting the Night Strike update. This upgrade kit included Cats-Eyes night vision devices (in the form of goggles), an upgraded laser targeting module (TFLIR) AN / AAS-38A and an improved inertial navigation system with color displays. This allowed the F / A-18s to deliver accurate nighttime strikes regardless of weather conditions.

In this form, the US Navy began to implement Operation Desert Fox.

Initially, the fleet insisted on conducting the operation exclusively on its own. In the region were the aircraft carriers USS George Washington and USS Independence with 102 attack aircraft on board - according to the calculations of the Navy tacticians, these forces were enough to carry out a campaign of retaliation against the forces of Saddam Hussein.

However, the final composition of the battle group was completely different ... 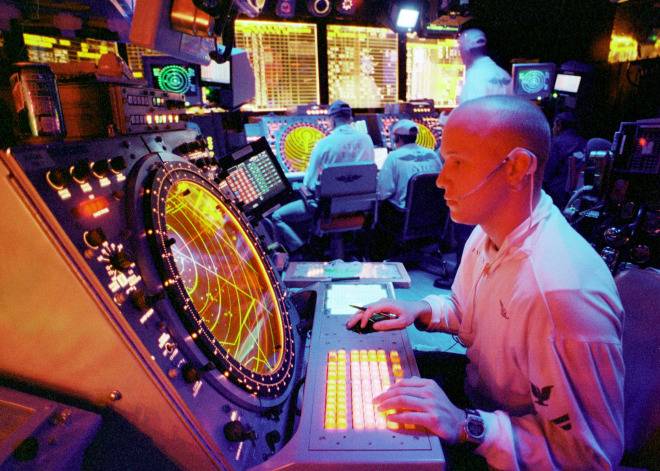 Mission Control Center aboard USS Enterprise during Operation Desert Fox. Photo source: NavalHistory.org
The aircraft carriers USS Enterprise and USS Carl Vinson are located in the Persian Gulf (they were also directly supported by the search and rescue vessel USS Belleau Wood with naval special forces to rescue downed pilots and the anti-mine ships USS Ardent and USS Dextrous). The mixed air force consisted of 200 (including B-52 and B-1B bombers, which carried air-launched cruise missiles) of the US Air Force and Navy, as well as 12 RAF Tornado aircraft.

The air campaign lasted 70 hours, and during it 97 targets were hit out of the planned 100.

On the first day, the Iraqi air defense was suppressed - the strikes were delivered by Tomahawk cruise missiles and aircraft from the USS Enterprise aircraft carrier.

On the second day, the attack was combined - the first wave was B-1B and B-52 bombers, launched from the island of Diego Garcia in the Indian Ocean, and Tomahawks, and after them - tactical aircraft of the US Air Force and Navy, as well as the Royal Air Force. 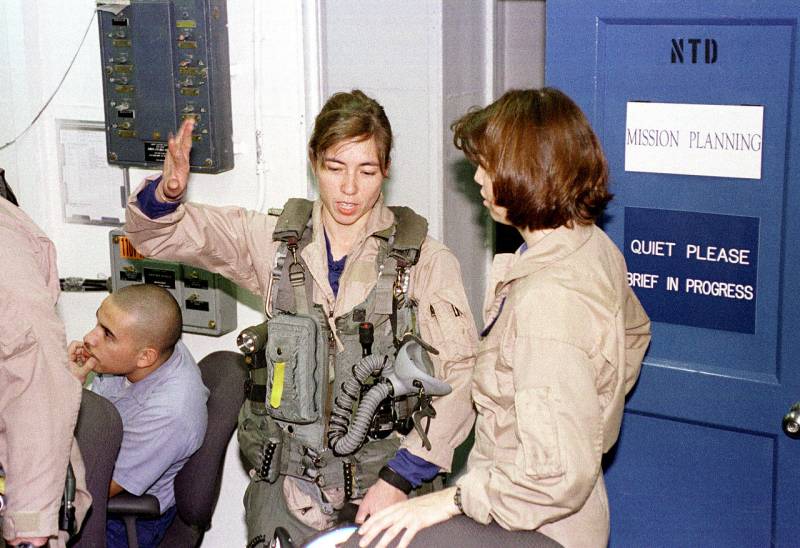 Lt. Carol Watts (center) discusses with Lt. Lynsey Bates (right) his night strike against Saddam's forces after returning aboard USS Enterprise during Operation Desert Fox. Photo source: Wikimedia Commons
The tactics of carrier-based aviation differed sharply from the operations of previous years - the stake was made not on the intensity of sorties, but on efficiency and stealth. The strikes were delivered exclusively at night using the cover of electronic warfare aircraft. According to the most accurate estimates, the average number of sorties from one aircraft carrier is 50 shock combat sorties (that is, 1 for each aircraft).

“The goal of our naval forces is to directly and decisively influence events by threatening the enemy from the sea at any time and in any place. 80% of the world's population and 80% of the capitals are within 500 miles of the ocean coast. Our fleet, on the other hand, has unique opportunities for realizing its sea power. We demonstrated this during Operation Desert Fox, and will continue to demonstrate this further in the skies over Iraq, Kuwait and the Persian Gulf. At the dawn of the XNUMXst century, our Navy and Marine Corps are deployed in full combat readiness as they resolutely face an uncertain future. We have always been and will always be there when America needs us and she calls us ... "
- Address by Rear Admiral Robert K. Williamson to the Navy Subcommittee of the Senate Armed Services Committee on March 24, 1999.

The operation was carried out successfully - the fleet competently used and worked out all the innovations, however, the "Desert Fox" had its own fly in the ointment - and, perhaps, far from one.

First, the Navy could not independently provide operational planning - in the end, this task fell to the Joint Forces Air Component Command (JFACC).

Secondly, Desert Fox once again demonstrated an important thesis (which, by the way, is still not comprehended and is a debatable topic in Russia) - an aircraft carrier cannot replace a ground airfield or operate in complete isolation from other components of the armed forces. It is necessary to combine the capabilities of the Air Force and the Navy (including in the face of ships with guided missile weapons), and not try to squeeze impossible combat effectiveness out of a single tactical unit.

Thirdly, the question of updating the composition of the fleet of carrier-based aircraft arose directly. Despite the modernization of the F-14, their combat value at the turn of the century was in doubt: the fleet no longer needed a heavy interceptor (the Soviet naval missile-carrying aircraft had already died, and a new worthy opponent for the Tomcat never appeared), and the F / A-18 did just fine with the entire range of tasks - and, moreover, had much more opportunities for modernization. The absence of carrier-based tanker aircraft also obviously affected - the Navy was impermissibly heavily dependent on Air Force air tankers. An explicit update was required both for the reconnaissance component in the person of the S-3 Viking (yes, in the 90s they were used for such specific tasks as reconnaissance and refueling), and for the electronic warfare aircraft - EA-6 Prowler.

And the question of the need to introduce airplanes with stealth technology also came up squarely. For a very long time, the Navy tried to deny their value, but the obvious limitations in the implementation of strike operations in the face of anti-air defense, as well as the fantastic successes of the Air Force using the F-117 and B-2, finally forced the ice to break. The Navy joined the Joint Strike Fighter program, which would later become known as the fifth generation F-35 fighter - but this, however, is completely different. история.