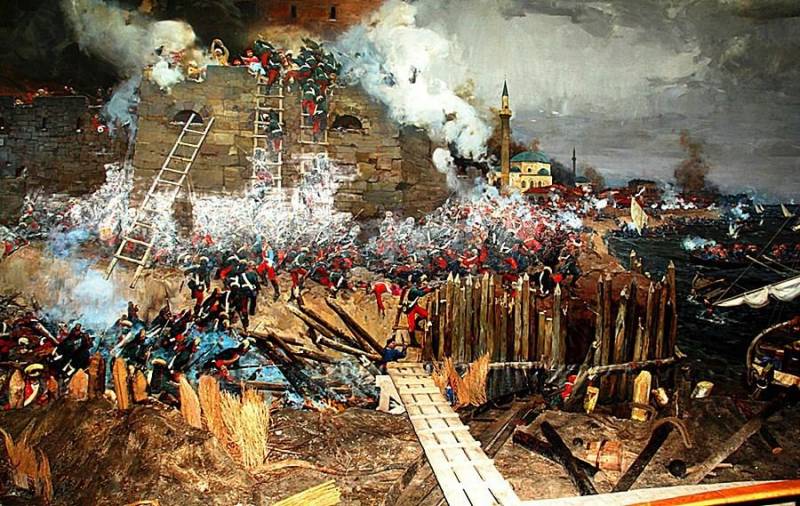 Today, December 24, our country celebrates the Day of Military Glory of Russia, dedicated to the capture of the Turkish fortress of Izmail by Russian troops.

It should be noted that this historical the event took place on December 11, 1790. New style is December 22nd, which might cause some confusion.

The thing is that in the version of the RF law of 1995 "On the days of military glory" memorable dates that refer to events that occurred before the appearance of the Gregorian calendar are calculated by adding 13 days to the dates of the Julian calendar. However, the aforementioned difference between the old and new calendars "formed" only by the XX century, and in the XVIII, when the event happened, it would have been 11 days. That is, historically it would be more correct to say that the capture of Ishmael took place on December 22, and not on the 24th.

But let us return to the event itself, which can certainly be called a "classic of military art."

The assault on the Izmail fortress became a key event in the Russian-Turkish war of 1787-1791, which ended in a devastating defeat for the Turks.

In August 1787, Turkey, which could not come to terms with defeat in 1774, declared war on our country. Almost from the very beginning, the course of the confrontation was extremely successful for the Russian army.

After capturing several strategic points and establishing full control over the Black Sea, Russia reached the Turkish fortress Izmail, the capture of which would open the Balkan direction.

It is worth noting that the Ottomans prepared well for the upcoming war. Izmail, thanks to the efforts of German and French engineers, turned into an impregnable citadel: an 8-meter rampart with bastions, as well as a ditch 12 meters wide and 10 meters deep in some places filled with water seemed at first glance an insurmountable obstacle.

In early December 1790, a 31-strong Russian army with more than 500 guns was concentrated near Izmail. In addition, through the efforts of our river flotilla the fortress was blocked from the Danube side. The siege was led by General-in-Chief Alexander Suvorov, who arrived at the scene on December 13.

The ingenious maneuver of the Russian commanders consisted in the imitation of preparations for a long siege in the immediate vicinity of the fortress. At the same time, a few kilometers from Izmail, Russian soldiers were preparing to take the fortress, practicing an offensive on improvised ramparts, like those that surrounded the Turkish citadel.

On December 17, Suvorov sent an ultimatum demanding the surrender of the fortress to the commander of the Turkish troops. The Turks, who were confident in the inaccessibility of Ishmael and were preparing for a long siege, received a negative response.

Early in the morning, after light, on December 20, the assault on the Turkish fortress began. For 2 days, Izmail was attacked from about 600 guns. The direct capture of the citadel began on December 22 at 5.30 am and ended with a crushing defeat for the troops of Aydozli-Mehmet Pasha by 16 hours.