Zyuganov: the American ambassador was shot as the last dog 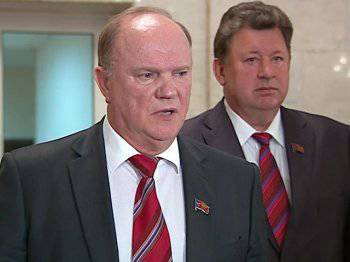 As it became known to Kommersant, the US authorities are not going to leave without consequences an insult by Gennady Zyuganov of the American Ambassador Christopher Stevens who was killed in Libya. In his Twitter, the leader of the Russian communists wrote that the diplomat was "shot as the last dog" and he "got what he sowed." According to Kommersant, Gennady Zyuganov’s statement has already been reviewed in the US administration and in the State Department, and after the November presidential election the leader of the Communist Party of the Russian Federation should expect an “extremely tough reaction”. Regardless of who wins them.


On Twitter, Gennady Zyuganov literally wrote the following: "The American ambassador to Libya was shot as the last dog. It was the main expert on the Libyan" revolution. "He got what he sowed." In the reception of Mr. Zyuganov, "Kommersant" reported that his Twitter is led by the press officer Denis Parfenov. Mr. Parfenov explained that he was responsible for the technical part, and Gennady Zyuganov personally dictates all the posts. “We are passing word by word what Gennady Andreevich says; we are not engaged in amateur activities,” Denis Parfenov assured.

Washington interlocutors "b" did not hide their indignation that the head of the second largest faction of the State Duma mocks the memory of the deceased diplomat. The sharpness of Gennady Zyuganov is all the more surprising because he maintained close contacts with the US embassy in Moscow: he talked with ambassadors, regularly attended receptions.

From the dispatches of American diplomats, promulgated by the site WikiLeaks, it follows that the representatives of the State Department regularly met with members of the leadership of the Communist Party. One of the telegrams also speaks of Ambassador William Burns’s conversation with Gennady Zyuganov in December 2007. The leader of the Communist Party of the Russian Federation, as follows from the document, at that meeting mercilessly criticized United Russia and Vladimir Putin.

The Kommersant interlocutor at the State Department confirmed that Gennady Zyuganov still "often meets with the staff of the American diplomatic mission to discuss current political processes." When asked about Washington’s possible reaction to the insult of Ambassador Stevens, the foreign ministry official responded evasively: "There are a number of responses that can clearly demonstrate our attitude to such statements."

Source "b", close to the US administration, was more specific. He is convinced that after the statement about the "last dog" the leader of the Communist Party of the Russian Federation will not be able to maintain the previous relationship with the American embassy. However, the boycott of Mr. Zyuganov by the diplomatic mission or any other "point sanctions" will not be announced publicly yet. As of yesterday, no special statement by the State Department representative on this issue was prepared.

At the height of the election campaign, the administration is not interested in unleashing another international scandal that would cast a shadow on Barack Obama’s foreign policy and would question the re-launch of relations with Moscow announced by him. The reaction was postponed until the election, but, as the interlocutors of “Kommersant” are convinced, it will surely follow. And regardless of who becomes president - Barack Obama or his rival Republican Mitt Romney.

If Mitt Romney wins the election, much more rigidly disposed towards the Russian Federation, experts do not exclude that Gennady Zyuganov may be subjected to "indicative sanctions." On his example, the politicians of other countries will be shown that in the future they will not be able to insult the United States and their representatives with impunity.

As for the deceased American ambassador to Libya, Gennady Zyuganov’s Twitter posting was incorrect not only in form, but in fact. Nobody shot Christopher Stevens. As is clear from the results of the investigation and eyewitness accounts, not a single bullet hit the ambassador - he was poisoned by carbon monoxide. And the Libyans, who entered the building of the US Consulate General in Benghazi after the militants left, found Christopher Stevens still alive - he died in the hospital.