How the US Navy aircraft carriers changed: the war in Bosnia and the SURGEX exercises 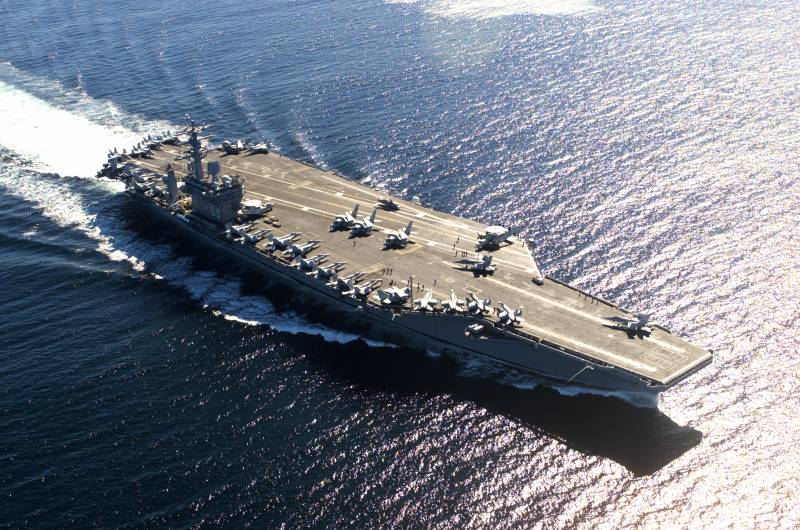 USS Nimitz in the late 1990s somewhere off the coast of Canada. Photo source: Wikimedia Commons

“The United States is moving USS Theodore Roosevelt into the Adriatic Sea to reach targets in the former Yugoslavia.
According to Navy sources, the ship has moved out of the Mediterranean and is due to reach positions by Tuesday evening Washington time. The Roosevelt carries over 50 combat aircraft, including 36 F / A-18s and 14 F-14s.
The Pentagon said this redeployment of the ship should be interpreted as a "cautious move" in light of the current tensions following Monday's shelling of a civilian market. It is reported that the request for the transfer of the aircraft carrier came from US Admiral Leighton Smith. The stop on the island of Rhodes, scheduled for the ship on Tuesday, has been canceled ... "
- excerpted from CNN's article US moves aircraft carrier closer to Bosnia. August 29, 1995 release.

After the end of the Cold War and the doctrinal shock experienced by the Navy during the implementation of Desert Storm (you can read more about this in the article "How the US Navy Aircraft Carriers Changed: Lessons from Desert Storm"), the American navy began to actively reform.

In the end, he had no choice - with the disappearance of the USSR Navy in 1991, American warships lost all non-strategic nuclear weapons... Value fleet was immediately questioned - especially ardent critics of the Navy proposed to reduce its composition from 451 ships by 2-3 times.

However, the era of local wars was approaching - and it was simply impossible to conduct expeditionary campaigns without the support of the fleet. The US Department of Defense has rejected the most ardent proposals for a reduction in the Navy.

The composition of the naval forces, although they should have been curtailed, but according to the concepts set forth in the doctrinal and revisionary document (... with North Korea and Iraq), as well as maintaining a military presence in several regions of the world (for example, in Africa and the Caribbean).

The very nature of the tactical tasks facing the fleet has changed radically. There was no longer a need to repel the attacks of Soviet missile carriers, to fight submarines and destroy missile cruisers. Local wars required advanced mine action, strikes against ground targets in the face of anti-air defense, well-developed logistics and well-functioning amphibious operations.

By the time Operation Deliberate Force began, the US Navy had significantly changed its approach to manning aircraft carrier squadrons and the types of weapons they used.

For example, the outdated A-6 Intruder attack aircraft did not fit well for the realities of the 90s and were gradually decommissioned. Organizationally, the fleet moved to a qualitatively different level, which was very different from that demonstrated during Desert Storm. 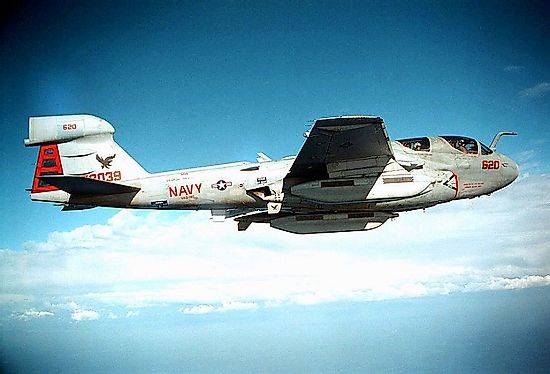 An EA-6B Prowler electronic warfare aircraft during Operation Force Deliberate. Photo source: World Atlas
The "deliberate force" is also notable for the fact that aircraft carriers of three other countries took part in it: Britain, France (2 AB) and Italy (although only American and French carrier-based pilots took part in combat missions directly).

“British and French aircraft carriers headed for the Adriatic Sea today and the United States is poised to send more fighter-bombers to bases in Italy as NATO has officially begun counting down on its demand that the Bosnian Serbs lift the siege of Sarajevo within 10 days, the military said.
A Pentagon spokesman said eight US F-15E attack aircraft will fly to Aviano, and two AC-130 attack helicopters and two EC-130 mission control centers in Brindisi from bases in the UK this weekend, joining roughly 100 NATO aircraft in Italy. .. "
- excerpt from the article Conflict in the Balkans; US and Allies Send More Planes for Possible Strikes in Bosnia by The New York Times. February 12, 1994 release.

As such, the start of the operation began precisely with the actions of the US Navy: the missile cruiser USS Normandy struck 13 Yugoslav air defense targets using the latest Block-III Tomahawks with GPS guidance and the TERCOM system. Then it was for aviation...

In the skies over Bosnia, carrier-based attack aircraft were presented by the F / A-18 Hornet. For eleven days of the operation, sea-based aviation made 583 sorties and another 165 patrolmen. Ground-based aircraft (US Air Force) flew 774 sorties and 392 patrols. In addition, ground-based aircraft of the Marine Corps also took part, which, however, did not perform combat missions - only patrolmen.

This time, the naval aviation carried out most of the strike missions using precision weapons: it was mainly represented by laser-guided bombs GBU-24 and AGM-65 Maverick missiles. If in 1991 naval aircraft used only 2% of high-precision weapons of the total number of dropped bomb loads, then in 1995 it was already about 90% - at least such figures were presented in a report by the US Institute for Defense Research 3 years after the conduct of " A deliberate force. "

The hit statistics, however, were in favor of the Air Force, not the Navy. Ground aviation inflicted 618 hits with precision weapons, achieving 374 hits (66,6% of the total number of targets hit), the Navy - 98 (26,2%). Despite the change in the composition of the squadrons, the carrier-based aviation was not able to achieve 4 sorties per plane per day - only 1,5. On average, F / A-18s flew 53 sorties per day, which, of course, did not suit the fleet command at all. 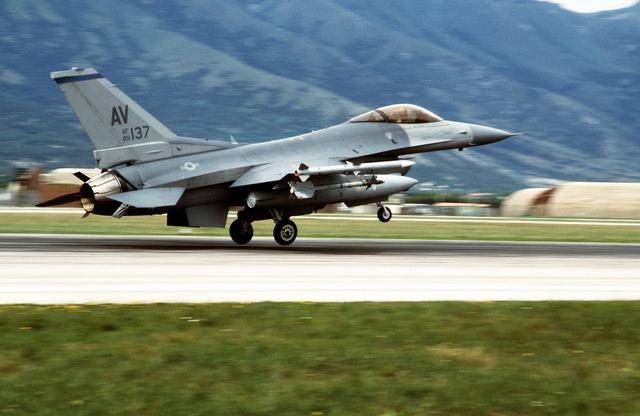 An F-16 fighter-bomber lands at the Italian Aviano airbase after returning from the bombing of Republika Srpska. Photo source: Wikimedia Commons
The air operation in Bosnia reaffirmed the correctness of the conclusions drawn after Desert Storm: with all their advantages, aircraft carriers cannot compete in the number of sorties with ground-based aircraft. But the fleet, however, did not agree with them, as well as with the need to introduce new types of aircraft made with the use of stealth technology ...

“Squadrons of carrier-based aircraft can operate on many more targets than ever before. We can make even more combat missions, and each of them will be unusually productive due to the use of high-precision weapons, which are now armed with our strike aircraft ... "
- Vice Admiral of the United States Navy Dennis W. McGinn.

In early 1997, the Navy planned a large-scale demonstration of the capabilities of aircraft carriers associated with an increase in the number of sorties - the Navy wanted to prove that carrier-based aircraft can be no less effective than ground-based aircraft.

On July 20, 1997, the fleet began an exercise called SURGEX (or Revolution in Strike Warfare). In 98 hours, the aircraft carrier USS Nimitz, represented by its air wing (CVW-9), made 975 sorties. Of this impressive number of sorties, 771 (79%) were shock (unguided BDU-45s were used), as a result of which 1 bombs were dropped on training targets. In this case, only F / A-336 fighters were used. The results of their work were simply phenomenal - 18 flights per day!

The rest of the sorties (21%) fell on the EA-6B Prowler electronic warfare aircraft and the S-3 Viking anti-submarine aircraft (which, however, served as tankers).

The navy immediately announced an incredible success - and also that such a rate of sorties can be realistically maintained in combat operations, and in general it could become the standard standard of work for carrier-based aviation. Naturally, such reports had little to do with reality - SURGEX took place in extremely specific conditions, which would have been practically impossible to provide directly in a war.

Firstly, the fleet thoroughly prepared for the exercises, wanting to show just such an impressive result - already 16 hours before the start of SURGEX, the personnel and aircraft were completely ready for departures. USS Nimitz took on 25 additional pilots for the F / A-18 - with the regular number of pilots, such an intense work seemed absolutely impossible.

Most importantly, the main volume of refueling in the air was carried out by the flying tankers KC-135 and KC-130 of the US Marine Corps and the US Air Force - the share of Vikings and the fuel storage of the aircraft carrier itself accounted for only a quarter of the total volume of refueling.

Logistics became the most sore point of the exercise: the stocks of bombs and fuel were depleted in less than a day, and they had to be replenished from a supply ship. The deck crews could hardly withstand the stress associated with the excessively high rate of departures - on average, it took less than 18 hour and 1 minutes for a full service cycle for one F / A-20.

But what was especially important: not a single combat sortie in these 98 hours exceeded a radius of 320 km! From the experience of shock operations in the Persian Gulf, such a distance looked almost pistol-like and had nothing to do with real combat operations.

SURGEX have clearly demonstrated that it is, of course, possible to provide 4 sorties per day per fighter - but it is pointless. The aircraft carrier's logistics were not suitable for such an overloaded combat work - it was not quantity that was required, but high efficiency.

The fleet showed obvious changes, both in its tactics and strategy, it was transformed under the new conditions of war at sea, but it did not do it quickly and efficiently.

New qualitative changes were required - but we will talk about them next time.