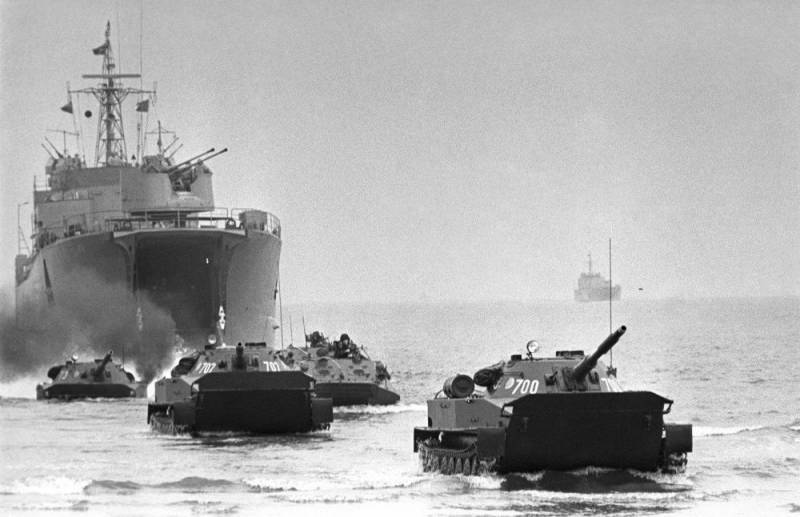 In April-May 1970, large-scale strategic exercises of the Navy were held in the USSR, in which the forces of all four fleets participated, and not only ships with submarines, but also a large number of coastal troops and sea aviation... They were dedicated, as was customary at that time, to a significant date, which in that year was the 100th anniversary of the birth of V.I. Lenin.

It so happened that our combat third separate tank the battalion was attracted to participate in the strategic maneuvers "Ocean".

Unfortunately, due to the remoteness of the events, as more than 50 years have passed, I will not be able to reconstruct them in detail. Perhaps someone from the participants will read this material, supplement or correct me. I would be grateful and glad.

The exercises lasted for an unusually long time, about 10 days. Our battalion operated in approximately the following sequence. The personnel were alerted, loaded T-55 tanks on trailers, transported to the strait and then on ferries to the island of Hiiumaa.

On the island we march under our own power, then by ferries - through the strait to the island of Saremaa, again march, pontoon, then by sea - to the coast of Latvia. Further, going ashore, victorious participation in the seizure of the bridgehead, then a march, it seems, to the station Limbazhi, there loading onto a railway echelon and return to the point of permanent deployment. 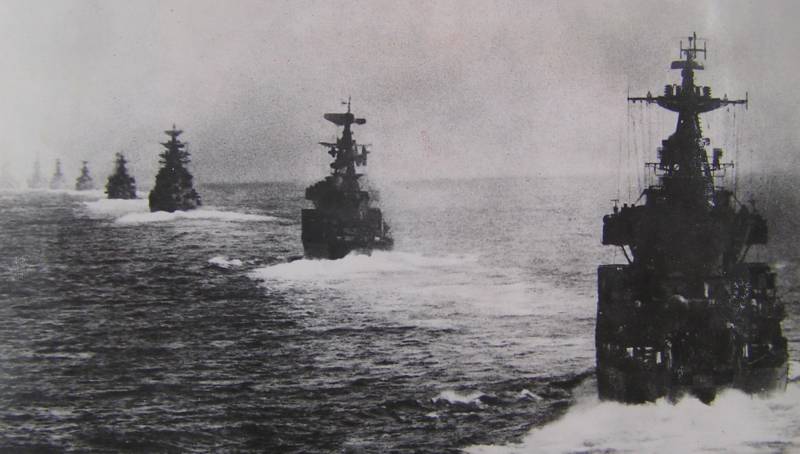 Despite the fact that the "Ocean" for our floating battalion passed quite smoothly, it was not without incident.

When the unit was alerted, our first company missed one platoon commander, by the way, my neighbor, and it was decided by the leadership that I, in addition to performing the duties of the company’s deputy chief, took command of the 3rd platoon.

The platoon commander was an unmarried guy, apparently out on a spree somewhere. We did not wait for him, went to the indicated area, where after a while the MAZ-537 truck tractors arrived. I remember that a battalion of these tractors was stationed somewhere in the Kaliningrad region.

As they say, there is a silver lining (or maybe a silver lining, from which side to look), and the problem of my location was automatically solved - in the tank of the platoon commander, in the place of the tank commander. And this means - to perform all actions in the crew on an equal basis with the rest of its members. That did not exclude the necessary actions to control the technical condition of the entire company. Therefore, my tank during the movement was usually at the end of the column.

On tanks across the islands

My, so far small, experience of service during the "Ocean" maneuvers was enriched with new practical knowledge and skills. And this experience did not always correspond to what I was taught at the school.

Perhaps the most memorable impression is associated with the above-mentioned MAZ-537 tractors.

The car is quite famous, therefore, speaking about its characteristics, I will be extremely brief. The carrying capacity of the trawl is about 50 tons. The engine is the Barnaul diesel D-12A-525A, similar to the engine of the T-34 tank, with a capacity of 525 hp. With. The tractor was developed at the Minsk Automobile Plant, but later it was serially produced in Kurgan, without changing the MAZ brand. The cockpit, apart from the driver, easily accommodated all four members of the tank crew.

Since I was a member of the crew at the time of the exercises, I fully experienced all the delights of loading and unloading a tank on and off the trawl.

The fact is that the folding ramps, along which the car was loaded and unloaded, were very heavy! Four crew members, and often the driver helped, could barely cope with this iron structure when it was necessary to raise it 90 degrees after loading. As they say, hands and back are still remembered!

I was also surprised to find that the drivers of these tractors operate them like ordinary cars, completely disregarding the features inherent in diesel engines: they started poorly heated engines, and the operating temperature was kept within 50-60 degrees, which is not enough.

As a result, most of those tractors that transported us simply shamelessly ate oil and smoked black smoke, not developing full power.

Here it is necessary to remind (the tankers of those years will not allow a lie) that each tank had an MT-16p tank with a 20-liter supply of oil. So, during the MAZ exercises, our inviolable oil reserve was completely devastated. I had to constantly add to the lubrication systems of gluttonous cars.

After the exercises, for a long time, by hook or by crook, the techies, together with the head of the fuel and lubricants service, wrote off this rather valuable oil, which, by the way, was once developed specifically for engines of the B-2 series. 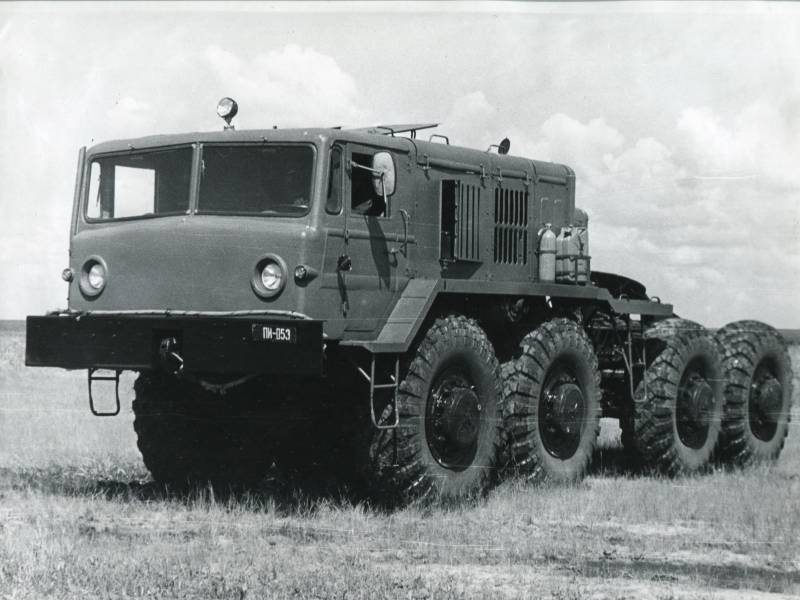 MAZ-537
We transferred our T-55 Minsk tractors along the highways to the coast of the Baltic Sea, and then by ferries we crossed to the island of Hiiu.

We made a march across this island to the strait, through which we again crossed by ferries to Saaremaa, the largest of the Estonian islands. The movement of the amphibious tank battalion in the course of the "Ocean" was accompanied by frequent long stops, sometimes for several hours.

This was also the case in Saaremaa.

At this point, I consider it necessary to make some deviation from the direct theme of my story and draw attention to the ethnic composition of the company.

The fact is that about a third of it was represented by Baltic soldiers - Lithuanians, Latvians and Estonians, and there were also Russians living in the Baltics among them. Lithuanians spoke Russian the purest of all, practically without an accent, a little worse - Latvians, and badly, with a strong accent - Estonians.

I think the censorship of the site will spare me if I give an eloquent example from life.

By the way, he served as a loader on my tank, an Estonian by the name of Kayo, such a tall man, a bit laggy. So, he had an aluminum spoon on which he wrote: "Ishi, shuka, meat!"

But, joking aside, most of the Baltic guys served diligently and conscientiously, without causing any special complaints. The rest of the soldiers were Russians, Belarusians, Ukrainians, and only a few were from the Caucasus.

And I don't remember at all meeting people from Central Asia.

During my service in the Baltics, no conflicts on ethnic grounds happened, which cannot be said about the Far Eastern garrisons with their uneasy interethnic relations.

On my tank, with which fate brought me together during the training, the crew consisted of a Ukrainian driver, a Lithuanian gunner, and an Estonian Kaio, a loader.

We stand once again during the march to Saremaa, and Kayo suddenly turns to me with the following words:

“Comrade Lieutenant! Local Estonians brew homemade beer according to a special recipe, they don't open it to anyone, and their beer is famous throughout Estonia. Come on, I'll quickly run to this farm, I'll try to get some. An Estonian should not refuse an Estonian. "
After some doubts, curiosity won out in me, and I, having entered into a "hazing relationship" with a subordinate, resolved.

Inspired by the trust shown, Caio gathered all four tank drinking cisterns by the straps and quickly ran to the farm, which was not far from the road. Most of all I was afraid that the column would start moving before he returned. But everything was resolved safely. Kayo arrived with full tanks of homemade Estonian beer and a large package of homemade Estonian delicacies!

The delicacies were divided equally for everyone, and I immediately put the beer tanks in my troubled suitcase. It was only upon arrival from the exercises that I tasted this beer with my fellow lieutenants, for which I thanked Kayo. A tank drinking cistern held, as far as my memory serves, about 1,5 liters.

By the end of the exercise, all the crew members became friends, and I felt a good attitude towards myself from the company soldiers until the end of their service in the battalion.

But back to the main story line.

On the island of Saaremaa, we hung pontoons, which I talked about in detail in previous parts, and made a sea march to the Latvian coast, to the Saulkrasti region.

I felt on myself how difficult it is to manage a driver-mechanic afloat when he does not see the "road". Constantly, almost without pauses, the commands: "Right", "Straight", "Left!" And that, poor fellow, was constantly forced to pull the tight steering levers.

The ashore went "in a regular mode", without any special incidents. They attacked the "enemy", of course, they won with a crushing score. At the same time, they made some noise - they fired blanks from machine guns and cannons. After this action, they boarded the train and went to the place of permanent deployment, in Klooga.

Frankly speaking, I did not have much work in my direct specialty during the Ocean exercises. As a deputy engineer, I walked around the tanks at the stands and before the float to make sure they were in good working order, and, if necessary, provided assistance to the crews. But I don’t remember that there were any serious breakdowns during these exercises.

The main attention, as always, was paid to checking the readiness of tanks to float. A preliminary so-called "lock" was made for the absence of leaks, acts of readiness for float were drawn up, where everyone who took part in the preparation of the machine and who controlled the work was signed.

And only then the deputy. the commander for naval training gave a written permission to sail. By the way, that time previously mentioned "CapTri" Chumakov for a long time did not give permission to enter the water, almost a day, because the sea waves exceeded the permissible limits. 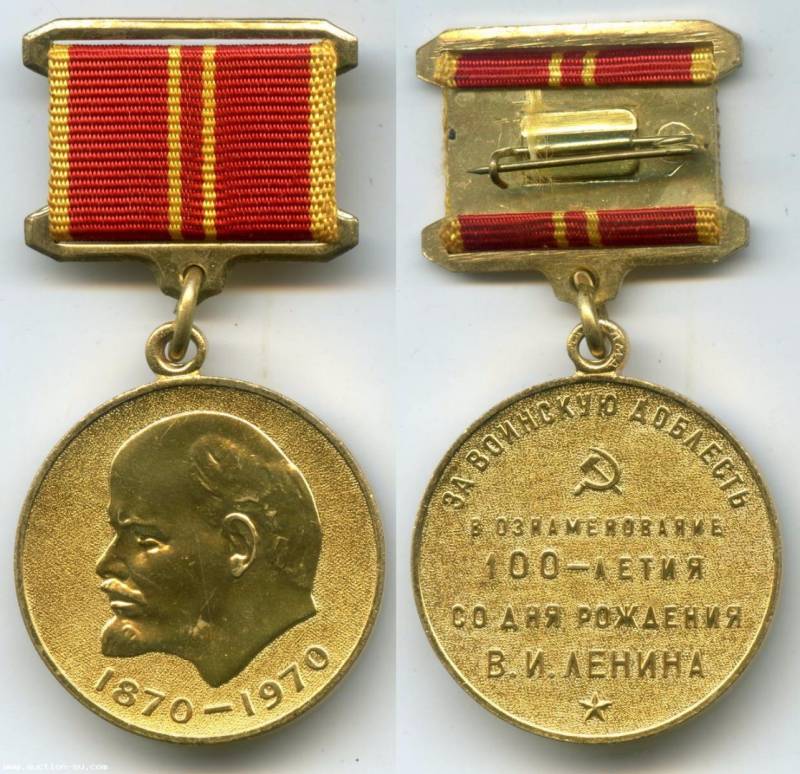 But we, according to the status of our ground, were given a limited number of these signs. It was enough only for the battalion command and staff officers.

And we, the "black bone", apparently, as a kind of moral compensation, were awarded jubilee medals in honor of the centenary of V. I. Lenin. A completely unequal replacement, I must say.