How the US Navy Aircraft Carriers Changed: Lessons from Desert Storm 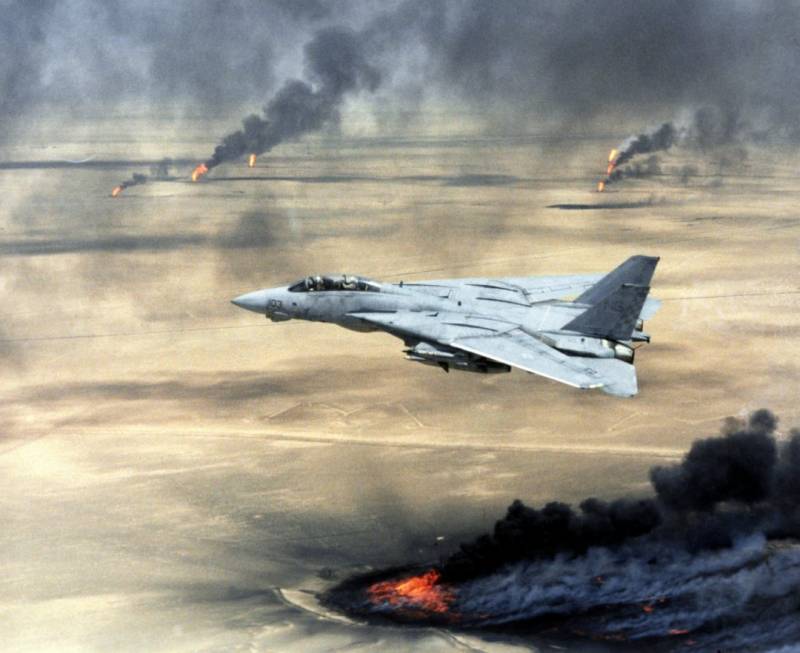 F-14 Tomcat carrier-based fighter in front of burning oil wells in Kuwait, set on fire by the troops of Saddam Hussein.

Photo source: historyonthenet.com
The US Navy needs to be downsized and reconfigured to keep its defense functions in line with current realities. It is important that politicians do not cut the size of the naval fleet without reevaluating America's global military commitments - but they must get rid of those that are irrelevant now that the Cold War has already ended. Failure to adopt a more realistic US security policy is fraught with strategic problems that will prevent the Navy from effectively performing its tasks.
Given the collapse of the Soviet Union, we do not see a single serious naval rival that poses a threat to the United States of America.
The continued maintenance of existing surplus naval forces is an unaffordable luxury. Long-term planning, taking into account current realities, should include a large-scale program for the simultaneous reduction of the number of ships by decommissioning obsolete ships. The new navy should diminish the role of aircraft carriers, a holdover from the Cold War strategy to counter Soviet rule, and abandon the costly and unnecessary doctrine of forward presence ...
- from a memo by Christopher A. Preble, former US Navy officer and independent military analyst. Dated August 2, 1993.

With the end of the Cold War, the military priorities of the United States of America have changed dramatically, and one of the hardest hit parties in this era of change has been the Navy. The US Navy had been preparing for a global confrontation with an equal adversary for decades, but the Soviet Union suddenly disappeared - and with it the American carrier fleet risked disappearing. The 1986 Naval Strategy in an instant turned out to be outdated and ineffective - the era of local conflicts began, and the Navy had to adapt to them accordingly.

Already in 1991, the US Navy, together with the multinational force, participated in the liberation of Kuwait - there were more than 130 warships in the combat zone, including 6 aircraft carriers. Despite the absence of a serious naval enemy, the war for the fleet did not go according to plan ...

The 1980s naval strategy saw carrier strike groups as the main force in the naval war with the Soviet Union. The aircraft carriers were supposed to be at the forefront of the confrontation, and actively attack the Soviet Navy, pushing its ships away from key water communications.

The main idea of ​​the doctrine was to drive the Soviet fleet into the framework of passive defense, forcing it to be in closed waters and defend its shores, where it was quite easy prey. However, another thing was also important - in such a state, the Soviet Navy did not threaten the alliance's ocean communications, vital for the transfer of troops, equipment and equipment to the European theater of military operations.

According to the strategy, the United States increased the number of AUG from 12 to 15 formations built around heavy aircraft carriers. The combat ships of the strike group also underwent a serious strengthening - since it was expected that aircraft carriers would face attacks from Soviet Tu-22M bombers and a large number of anti-ship missiles, the Navy attached great importance to air and missile defense. It was supported by the Ticonderoga-class cruisers and the Arleigh Burke-class destroyers with the Aegis system.

The colossal spending was completely justified - the Soviet naval forces were a serious enemy. It is worth noting that in the 80s, the US Naval Command called 15 aircraft carrier strike groups the minimum necessary to ensure a strategic presence and offensive operations in the Pacific, Atlantic and Mediterranean regions.

However, the war with the Soviet fleet never happened - there was a war of a much smaller scale and with a much less serious enemy, which, however, forced the US Navy command to experience a slight shock. We are talking, of course, about the Gulf War.

As Desert Storm progressed, little confirmed the assumptions and conclusions of the 1986 Maritime Strategy. No naval forces challenged us: the enemy aviation our aircraft carriers have never attacked in waves, and submarines have not threatened the streams of people and equipment crossing the oceans. The Navy did not fight in the open ocean - and this is exactly what it had been preparing for over the previous 20 years ...
- Admiral of the United States Navy, William A. Owens, former deputy chairman of the Joint Chiefs of Staff.

Before the conflict with Iraq, there was a serious debate in the US armed forces about the military effectiveness of aircraft carriers: in different decades, different points of view prevailed - at the dawn of the emergence of ICBMs and strategic jet aviation, there was an opinion that aircraft carriers had already outlived theirs, and in the 80s the point of view of the fleet took over, which represented aircraft-carrying ships as almost an equivalent replacement for the land-based air force.

However, as practice has shown, all parties were equally wrong ...

In general, a number of basic naval myths and misconceptions looked like this:

1. Aircraft carriers can operate effectively without access and interaction with ground air bases.

2. They can deliver powerful series of strikes against ground targets located hundreds of kilometers from the coast.

3. Each attack aircraft on an aircraft carrier is capable of 4 sorties per day.

4. The Navy does not need aircraft with stealth technology (in the 80s the concept of stealth was just being introduced, and the Navy rejected it in every possible way).

With the outbreak of hostilities in the Persian Gulf, many details unpleasant for the fleet became clear - for example, the aircraft of the Navy could not use high-precision weapon with laser guidance to the target. Moreover, it was simply absent in the fleet - and the success of using unguided bombs against ground targets against the background of the work of the Air Force looked, to put it mildly, completely nondescript.

The situation was much worse with the intensity of flights - it turned out to be just disgusting.

After the war, the Center for Naval Analysis in Alexandria issued a report that a total of 6 sorties were made by naval aircraft. 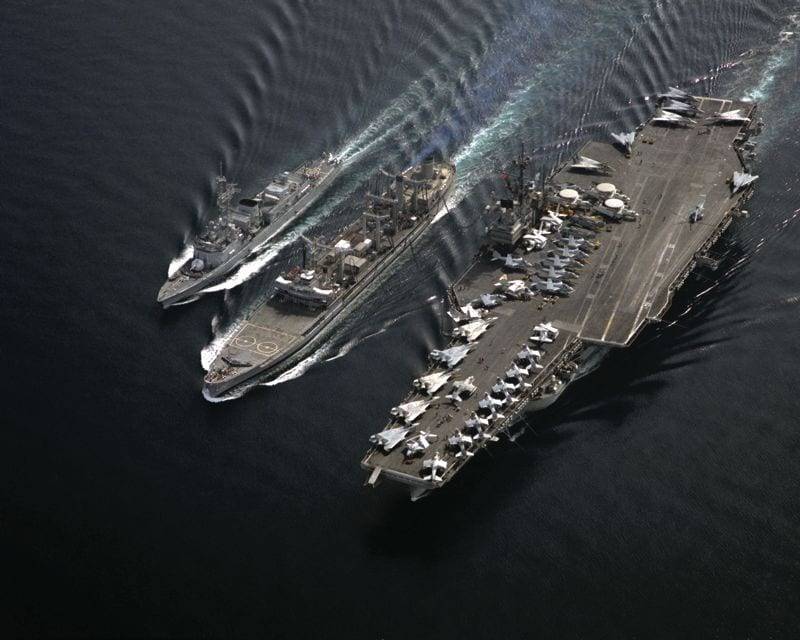 Loading supplies to the US aircraft carrier USS Ranger and the French destroyer Latouche-Treville. Perfect, time-honored logistics was one of the strengths of the US Navy. Photo source: defensemedianetwork.com
As an example, we can consider the combat work of the most effective aircraft carrier USS Theodore Roosevelt (CVN-71).

During the war, CVN-71 was in positions near Qatar, where it arrived with a very solid number of strike aircraft: it carried 20 F / A-18 multi-role fighters, 18 A-6 medium bombers and 18 F-14 interceptors. For 43 days of the war, carrier-based squadrons of an aircraft carrier made an average of only 2,03 sorties per aircraft per day - while it was expected that there will be at least 4 (as noted above, the USS Theodore Roosevelt was the most effective aircraft carrier in the operation - more than 4 sorties, during which more than 000 tons of ammunition were dropped). 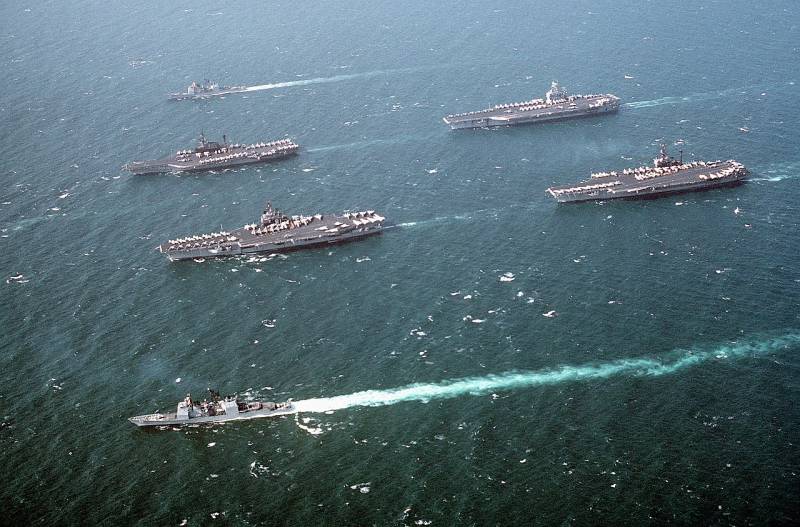 US Navy Battle Group Zulu following the end of Operation Desert Storm, March 2, 1991. Photo source: Wikimedia Commons
One would think that such a low efficiency of carrier-based aircraft was due to the inefficiency of the aircraft carriers themselves - but this would be a wrong conclusion.

Aircraft of the Navy simply turned out to be unprepared for participation in a local war - for several decades the development of their strategy and tactics was sharpened for naval battles, and "Desert Storm" set a completely different task for the fleet - work on ground targets. Despite all the conceptual shortcomings, the fleet's aviation proved to be at its best - the naval pilots played a key role in suppressing the Iraqi radar network, and the E-2C Hawkeyes provided control of the airspace filled with aircraft from different countries.

The reaction of the leadership of the Navy to such obvious shortcomings of the naval doctrines of the Cold War was immediate: already in 1992 the fleet had a new concept and a new vision of its development ("From the Sea", carried out by order of the Commander of Naval Operations Admiral Frank B. Kelso II), Purchases of large consignments of high-precision weapons were organized and the composition of carrier-based aircraft was changed. A-6 Intruder attack aircraft began to be removed from service - now attack aircraft were represented exclusively by the F / A-18 Hornet and F-14 Tomcat. Thus, during Operation Deliberate Force (Bosnia, 1995), USS Theodore Roosevelt carried out combat missions exclusively with F / A-18s using precision weapons.

Naval Strategy remains on the shelf for now, but will be used again if necessary ...
We must be insured against the revival of Soviet naval power ...
In connection with the reduction of our forces and the reduction in the number of resources to ensure a military presence, we must develop new schemes for the deployment of battle groups of aircraft carriers and amphibious battle groups ...
PLATs are freed from the need to provide constant anti-submarine warfare on long-distance communications and can now be available for more missions to project naval power and support regional character ...
As for the AUG concept, it has undergone significant changes - from the central element of the fight against the enemy fleet, aircraft carriers have come to be considered as mobile forward air bases used as a means of ensuring a strategic presence. Also, the fleet completely abandons non-nuclear heavy aircraft-carrying ships - "Desert Storm" gave a clear example of the effectiveness of aircraft carriers with different types of power plants. 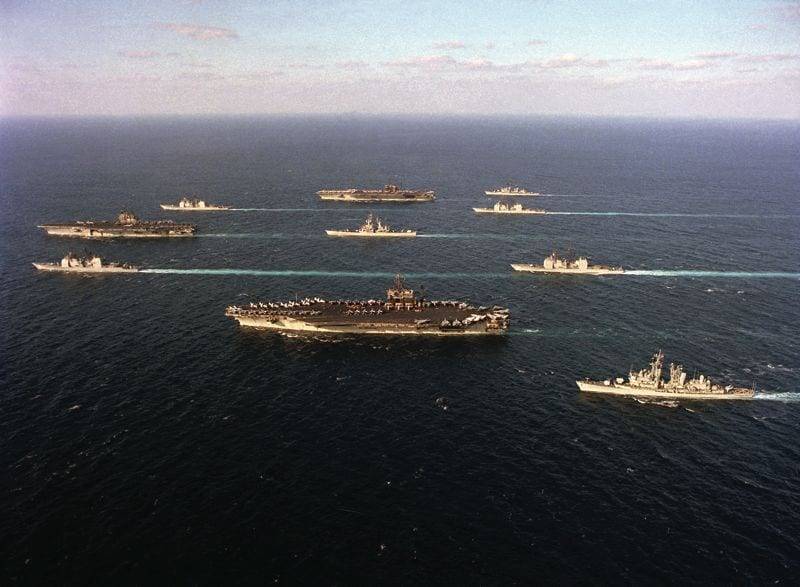 The Navy's ability to provide a wide range of firepower and high frequency of missions can have a large impact on the course / outcome of conflicts, especially during the most critical, early period of the campaign, when the continental United States is just beginning to enter the theater of war ...
- an excerpt from the 1997 Navy Operational Concept by Commander of Naval Operations, Admiral Jay L. Johnson.