Drones in the war in Donbass in 2014–2015: an interview with an artillery reconnaissance officer 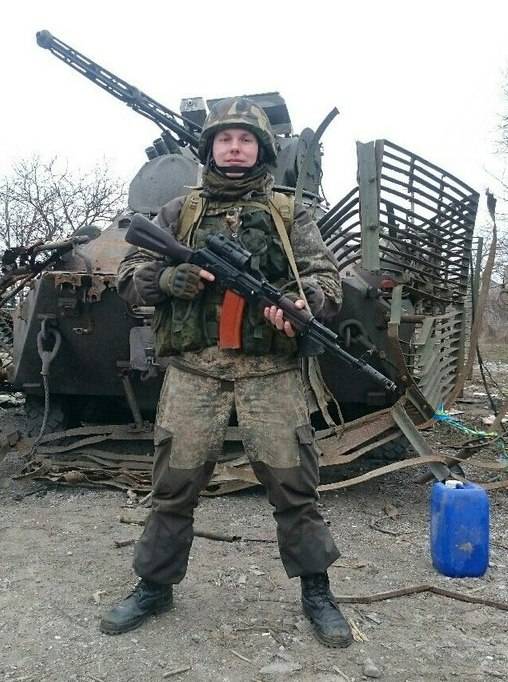 The topic of the use of drones in military affairs remains one of the most relevant and demanded topics for at least the last ten years. Most often we read about formidable combat vehicles with high-precision guided weaponsused by the United States, Israel or Turkey, but much more modest and compact devices that perform other equally important tasks on the battlefield remain behind the scenes.


Today I present to the reader's attention a rather non-standard material dedicated to the use of drones in the war in Donbass by the militia of the unrecognized republics. This is an interview with a veteran of military operations in eastern Ukraine, Andrey Kurshin, a volunteer artilleryman with practical experience in using drones in war.

- Let's start, as they say, from scratch. Tell me, when you arrived in Donbass, about your military specialty, rank, did you have combat experience before this war?

- Since June 2014, he has come as a volunteer to the Donbass militia. Rank,
specialty (at the time of the end of my participation there) - the commander of an artillery reconnaissance platoon, I started out as a simple soldier with the SKS in 1953 ... I had no experience, but I did military service from the sixth to the eighth year as the commander of a rifle squad. Well, where is the deadline, and where is the fighting? These are, let's say, incomparable things. That is, at the time of 2014, I did not have any experience of conducting hostilities. If it had been, then everything would have gone much more natural and easier that summer - I had to get to a lot, as they say, on the spot, and not only to me. Almost no one around had any training: some knowledge and skills, which later became something of an elementary habit, seemed incredible in 2014.

From the very beginning I got into the artillery - partly by accident, although perhaps the coincidences are not accidental. When they brought us to the "killed" miners' KUNGs to the Southern Front, which was then held somewhere in the Stepanov-Snezhnoy area, and after a while the Ural drove up with my future commander, Ash, he was looking for gunners. I asked him if ballistics engineers would be suitable, he said - jump into the Ural. So he became an artilleryman. 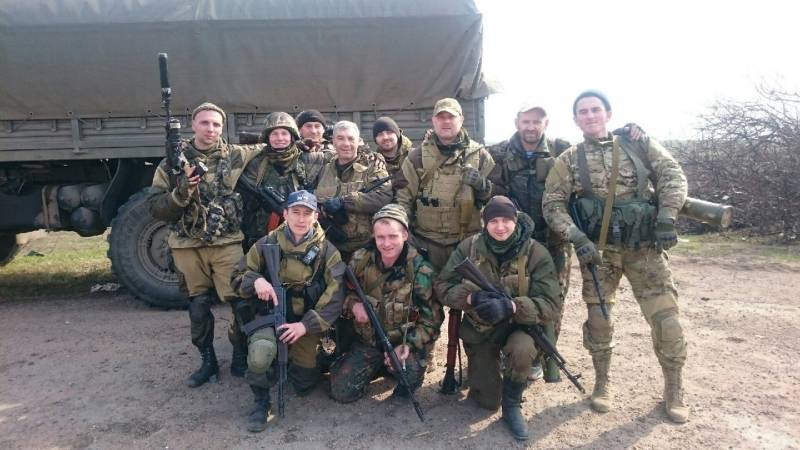 - It is reasonable to ask if there was any training or basic course of study when you got into the troops?

- The only time I went through training was in the fall of 2014, when I was retraining to be an artillery reconnaissance officer. We were taught by people with experience, including the Chechen war, professionals.

They taught us, so to speak, to speak the same language - that of battery commanders, that of spotters, that of scouts. Topographic location, orienteering - commonplace, in a word, things.

The rest of the personnel were technically competent - if we talk about commanders, they were engineers, and in general people with a predominantly technical education. The rank and file consisted mainly of miners - that is, people accustomed to working with complex equipment and with developed teamwork skills.

- What types of artillery have you worked with? What was in service in your unit?

- What tactics did you use in the summer, given such serious problems with equipment?

- The tactics of the so-called "fast mortars". You throw both mortars and mines into the Ural. Quickly, very quickly you move to the firing position and even faster you deploy and direct both "pipes". We worked exclusively with adjusting fire and threw 10–20 minutes on the barrel. Then all the same with lightning speed collapsed and left the position. If everything is done correctly, then by this moment the enemy does not even have time to uncover the trunks for a response.

If we talk about the tactics of the militia in general, then it was chosen very competently, and I think this is Strelkov's merit. Instead of just sitting out in the cities, he created mobile units and waged precisely mobile warfare, which he learned from the militants in Chechnya. He created sabotage detachments, rapid reaction groups, mobile detachments, since he did not have the opportunity to organize a single front line. And it was not an option to lock ourselves in the cities - the Armed Forces of Ukraine outnumbered us tenfold in artillery and sooner or later would have smoked from there. 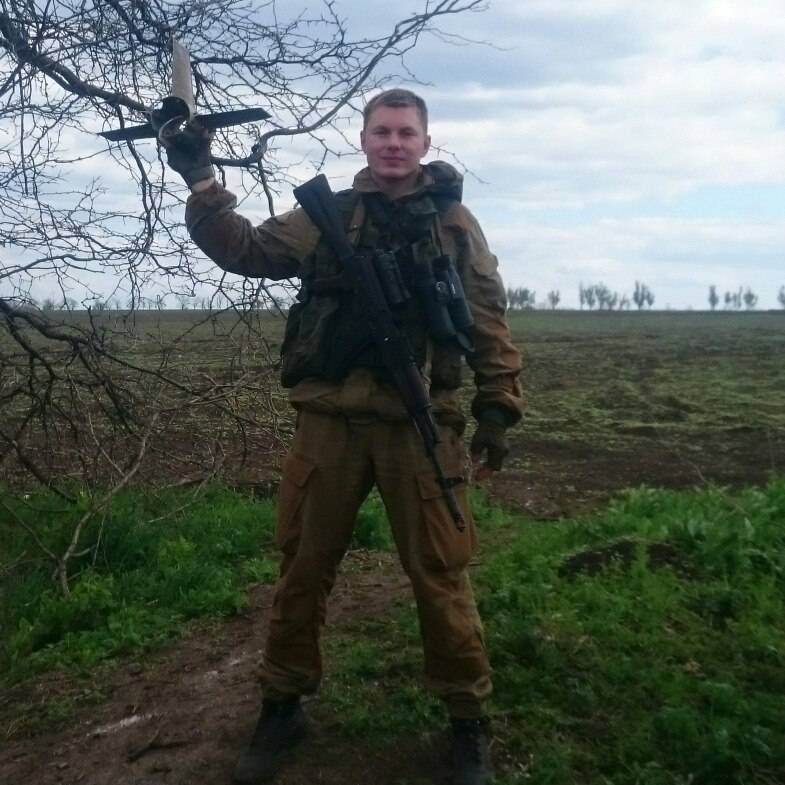 - When did you start using reconnaissance drones? From what period?

- This question is rather relevant already for the fall of the 14th year and beyond. When it all started, there were no people who knew how to use them - and there was no money. Those that were collected, for example, by volunteers, went to more pressing issues like ankle boots. However, the understanding of their necessity came with the advent of normal means of fire destruction, because when you have only mortars from artillery, the drone is not really needed. The real working distance of the "pipe" is four kilometers, this is the limit. Considering that you are not standing on the front end, but in the distance, the distance will be even lower. In a word, there was enough data from ground reconnaissance to hit targets.

According to my observations, in the summer there were isolated cases of the use of drones, but by the spring of the 15th, when a full-fledged front line began to form, they began to be used en masse. Then we already had adequate means of fire destruction - the aforementioned "Nona", D-30, "Carnation", "Grady", and the question of identifying targets arose at full height.

- What type of drones were used in your unit? Airplane type or did you use quadcopters?

- We had a fairly solid fleet of drones, but we mainly used only one - a large homemade quadcopter. It had a good camera, autopilot, high-quality communication. Its working range was about 13 kilometers, if the flight was programmed, but if we are talking about the radius controlled by the operator, then about 7 kilometers. It made it possible to work not only in positions on the front line, but also, let's say, in a fairly deep rear of the enemy.

There was also an aircraft-type drone, but we practically did not use it due to the unstable picture quality.

There was also a heavy hexacopter. It had 6 powerful motors and coaxial propellers - although it was a civilian, it was a very solid apparatus for carrying a heavy camera and, accordingly, professional video filming. We tried to use it to drop both fragmentation and cumulative grenades, but, unfortunately, we failed to achieve targeted bombing. The reason was simple - if you want to hit, fly low, and this is the risk of losing an expensive device worth 300 thousand rubles, which we had in a single copy. We could not afford to lose him - and at high altitude, of course, the accuracy of the defeat was no longer there. 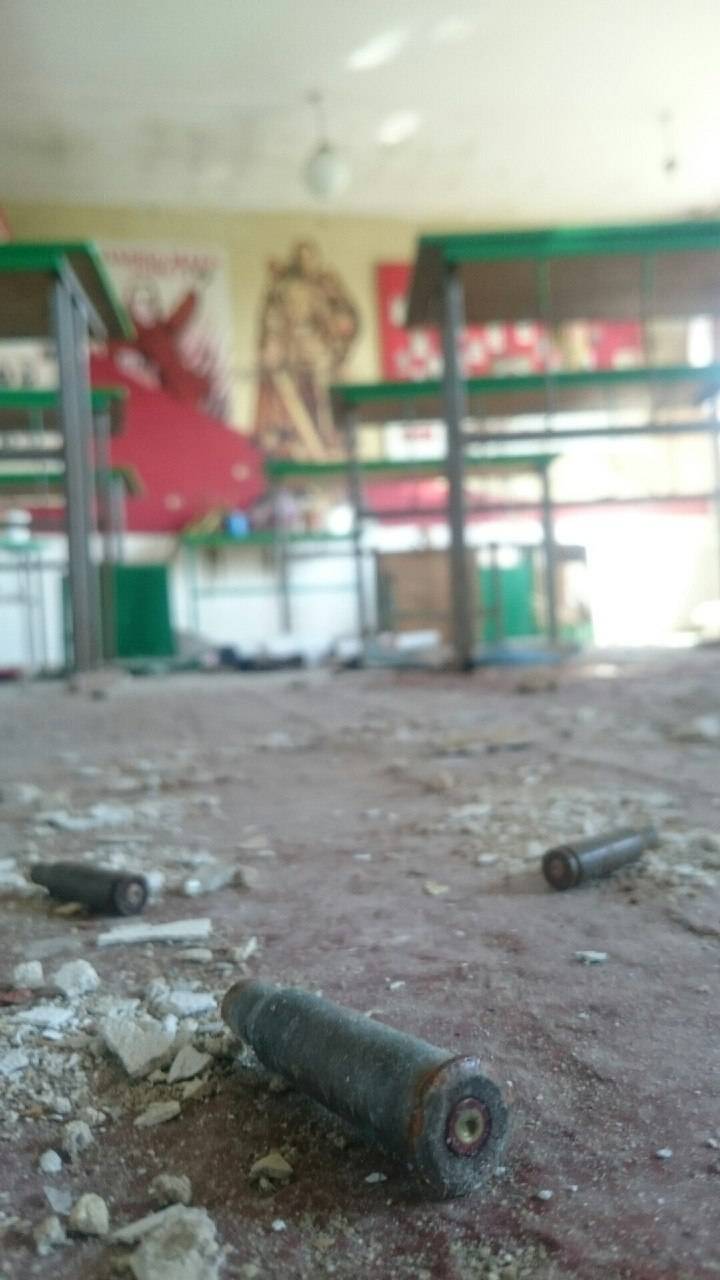 - How did you come up with the idea of ​​using the UAV? Was it some kind of centralized command staff initiative, or was it a local initiative?

- The idea as a whole was obvious - we had a lot of technically competent people who are fond of military topics, who were aware of how drones are used in local wars. As I already said, everything was limited only by the financial factor - no one gave us any equipment and drones.

Through the channels of the so-called "Voentorg" they sent out frank trash, which, it seems, was taken away according to the principle "take it, God, what is useless for us." I personally sorted out the shipments, which consisted of such "useful" things as a 60th artillery numerator - for you to understand better, this is a mechanical analog calculator.

In a word, the introduction of UAVs was the initiative of specific commanders and even fighters who themselves collected money for them, looked for sponsors, got spare parts or bought ready-made models. It was mainly about homemade products from components from Aliexpress and similar sites, which we ourselves collected and modified. In our unit there were serious radio amateurs - there was, for example, a comrade from Rostov, who was engaged in drones even before the war as a hobby.

The first priority was the adjustment of fire and reconnaissance in real time, and we worked in this direction. Accordingly, drones valued not, say, speed characteristics, but the quality of communication, reception / transmission of radio signals. Here we had fun as we could - we made homemade antennas and so on.

At first, of course, they used fairly simple models that scanned the terrain according to the set program. Over time, they came to flight in real time - of course, they needed more serious equipment: a directional antenna, a TV signal receiver, a decoder, a set of monitors for the operator and spotter. 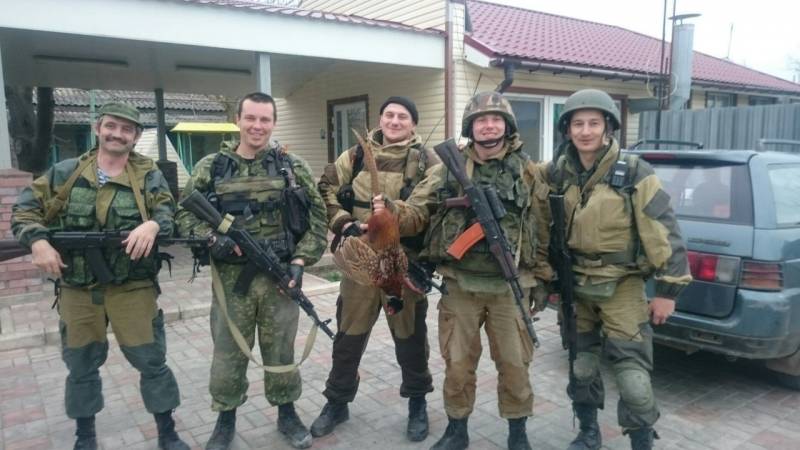 - How would you rate the effectiveness of the use of drones by your unit? Is it possible to say that without them the results of your artillery attacks would have been worse, or could you do without them? Did the factor of the presence of the UAV affect the safety of personnel in the reconnaissance platoon?

- The factor of the safety of personnel was unambiguous.

But at the same time, we should still distinguish between the tasks we faced: in some cases it is necessary to conduct reconnaissance and adjust the fire on the front end visually, and in some cases it is precisely the UAV that is needed. We can say that this is a complex collection of information.

Well, the primary and main task that we could only and exclusively perform with drones was strikes at the rear of the enemy, and, what is important, with adjustments. Since the fall of 2014, we could work more or less confidently without them only on the front end. Behind him, the effectiveness of our fire fell: operational bases, equipment parking, headquarters became inaccessible targets - of course, it was possible to work on them, but only blindly and with a large expenditure of shells. Drones solved this problem.

- Can you tell us about any specific combat episode involving the UAV?

- Well, perhaps the most interesting episode was with the attack on the base of the Azov battalion in Sopino. This is a former children's camp, in which there were at least 15 pieces of equipment with personnel. We hit it with an artillery strike with an adjustment - unfortunately, the video did not survive, it died with my old laptop. There was only a photo from a quadrocopter, which conducted reconnaissance before the strike - which is a pity, because these were very cool and visual frames "before" and "after". 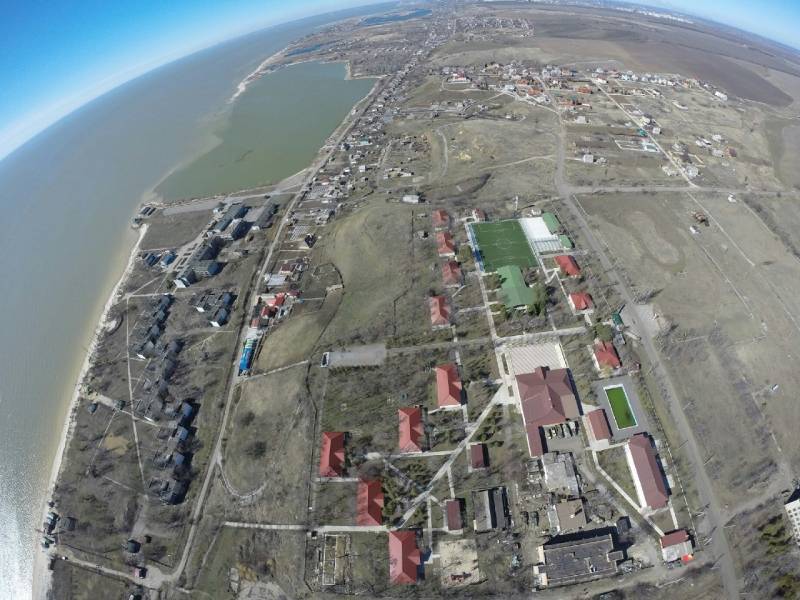 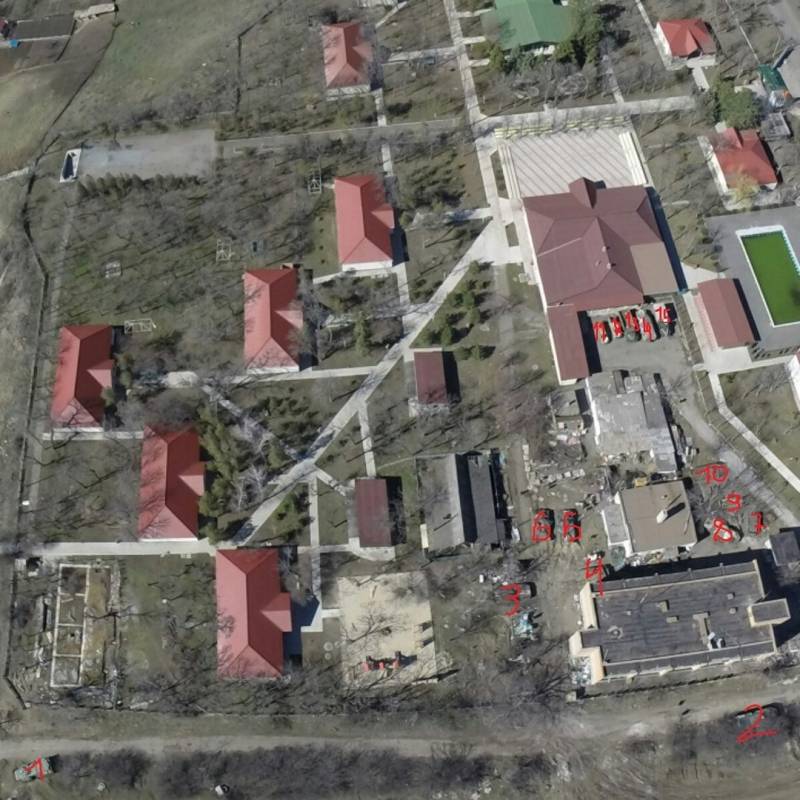 Filming the base in Sopino before the artillery strike. Photo: Andrey Kurshin's personal telegram channel t.me/m0sc0wcalling

- Can you tell us something about other, so to speak, non-standard equipment in your unit, in addition to the UAV?

- Well, in addition to drones, we also seriously spent money on radio communications - we equipped our entire division and all our subcontractors with digital radio stations. While they were using analog, everyone who was not too lazy listened to them - as soon as they went on the air, the enemy immediately began to activate. After the transition to digital communications, the Ukrainians did not understand what was happening until the guns began to work - whatever one may say, the channels were encoded, and not bad enough.

We did not have thermal imagers - only "night lights", but, so to speak, the most simple ones. I had a collimator purchased at my own expense. This, perhaps, is all.