Museum toys, including military ones ... 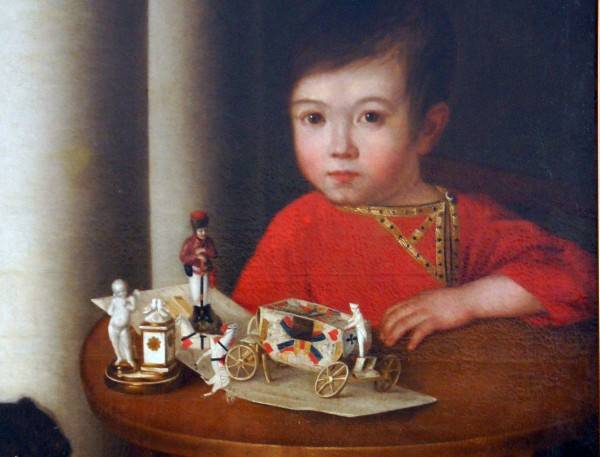 And the baby will play over the snake's hole, and the child will stretch out his hand on the snake's nest.
Isaiah 11: 8

Play now, children! Grow free!
That's what a red childhood is given to you,
Peasant children. N. A. Nekrasov
Culture and история. Memories of the past. On the eve of the New Year, it makes sense to talk about something pleasant. And what could be more pleasant than a carefree time of childhood? No special responsibilities for you, no worries, but a lot of games and fun ventures. And, of course, toys that have surrounded us all since childhood. The simplest toy is known, which was played by a bushman girl who did not even have clothes: it was a twig with two "legs", depicting a child, whom she gently laid to her breast and lulls.

I must say that, in general, attention has always been paid to toys. The adults understood that children's games were impossible without them, and therefore they took care that the children had them. And the most different. Note that the topic of toy history for its more or less complete coverage will require not one, but many articles, and perhaps someday such a cycle will indeed appear on VO. But not now! 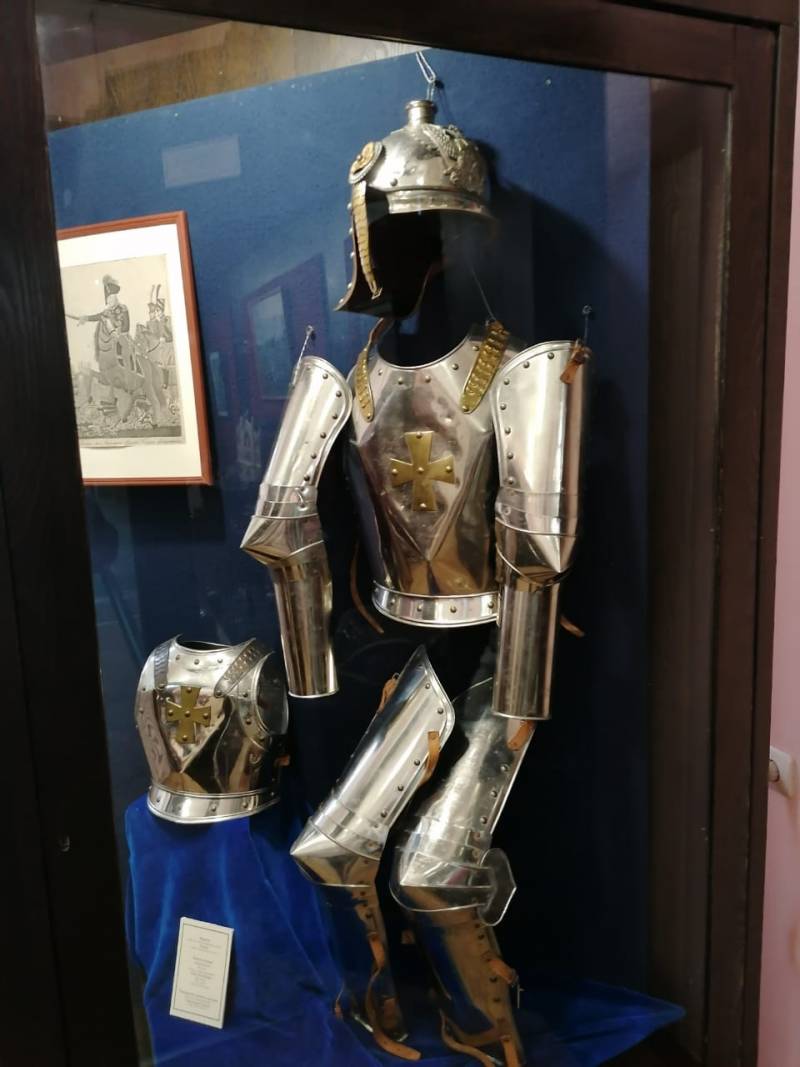 What boy would not be interested in playing knight, putting on even toy, but real metal armor? Here they are - among the toys of the royal children in Sergiev Posad
Now we will talk, or rather, we will talk about the toys that are collected in the Toy Museum in Sergiev Posad. This museum is very interesting, and if you visit Sergiev Posad, then try to choose a time to visit it. It is not very far from the Lavra. The name of the museum itself is long and boring: “Art and Pedagogical Museum of Toys named after N.D. Bartram of the Sergiev Posad branch of the Federal State Budgetary Educational Institution of Higher Education "Higher School of Folk Arts (Academy)". But its contents did not get any worse from such an unpronounceable name ...

It is interesting primarily because there are toys of Russian tsars. But it's always interesting to see what the royal offspring from the family of Nicholas II played with ... 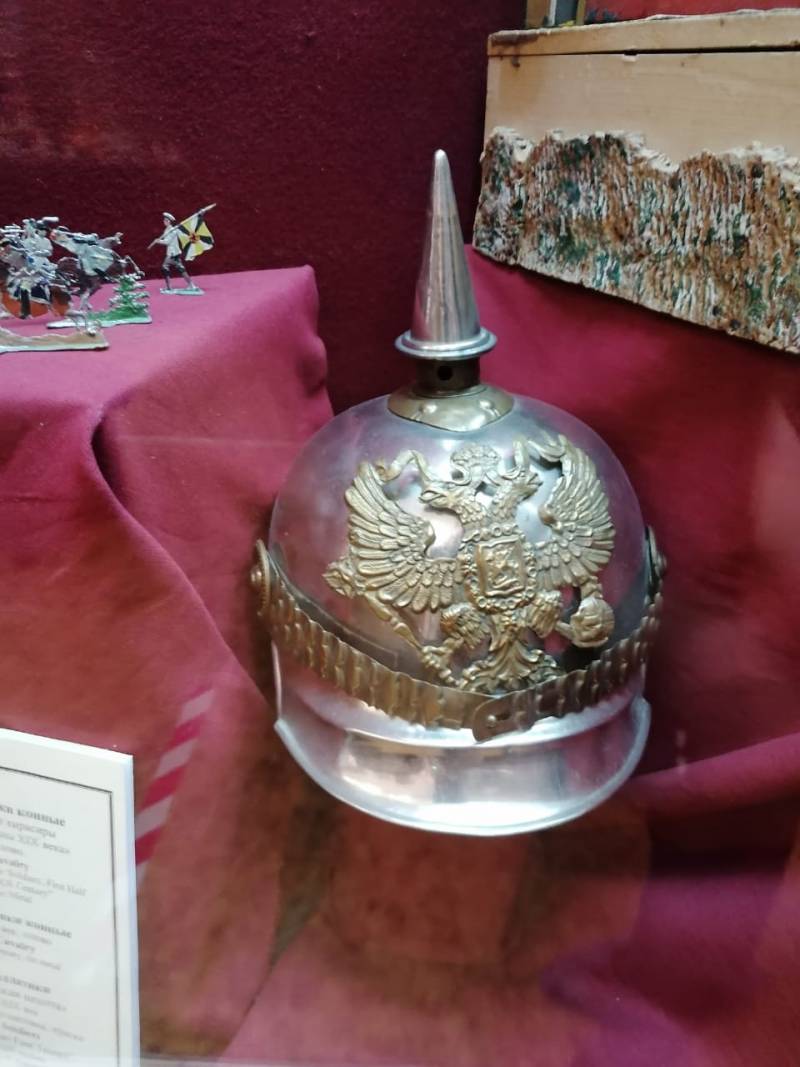 And this is a helmet, and just like a real one. And not just a helmet, but a cuirassier one. So under it, in any case, it was written ... 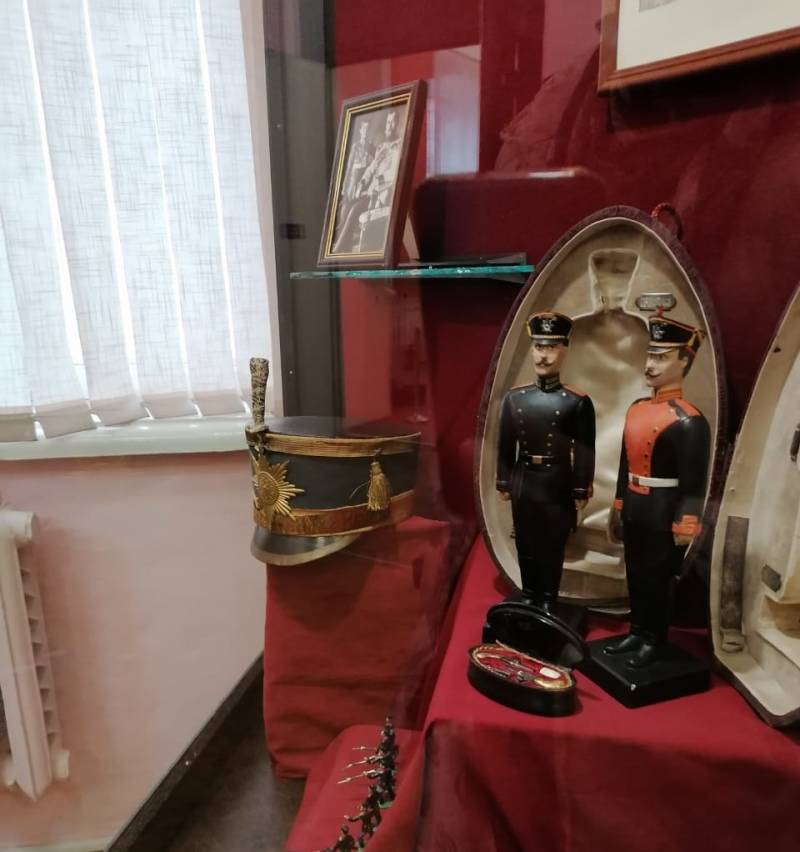 But there was also a 1912 shako in Tsarevich Alexei's wardrobe, as well as a couple of real capsule revolvers and ... soldier dolls 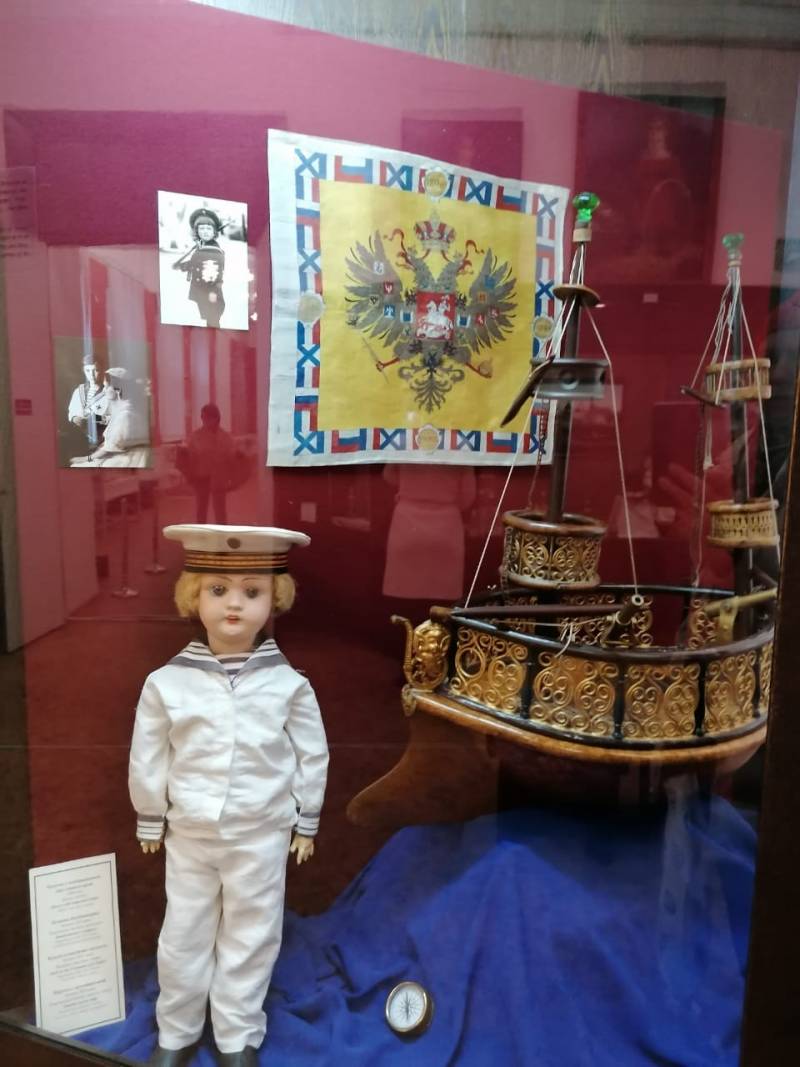 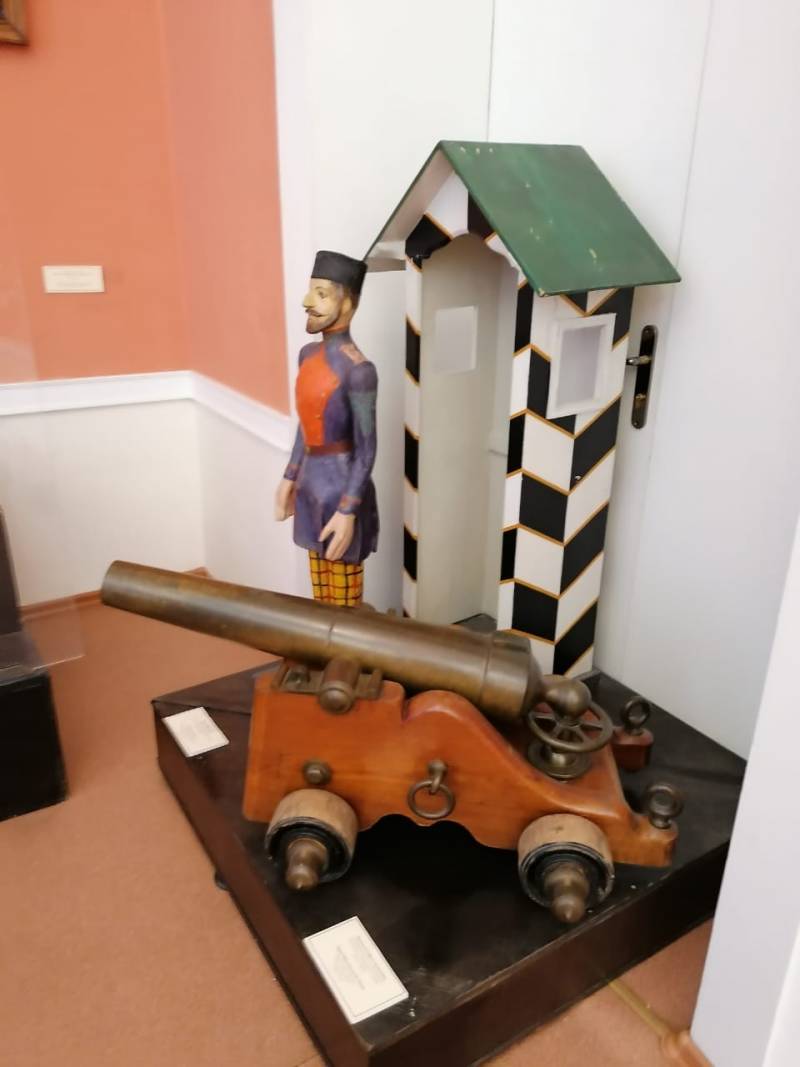 A gun. And quite large. And not just a big one ... You can really shoot from it!
Well, the tsar on the Russian imperial throne was first of all a warrior, hence the abundance of military toys in his game "arsenal". I myself had a chance to visit this museum back in Soviet times. The photographs presented here, unfortunately, were not taken by me, but the signatures, from which it would be clear which heir-crown prince they belonged to, are not available for all exhibits. But - let's just look at them and admire the quality of their performance. And we will get to know some toys better ... 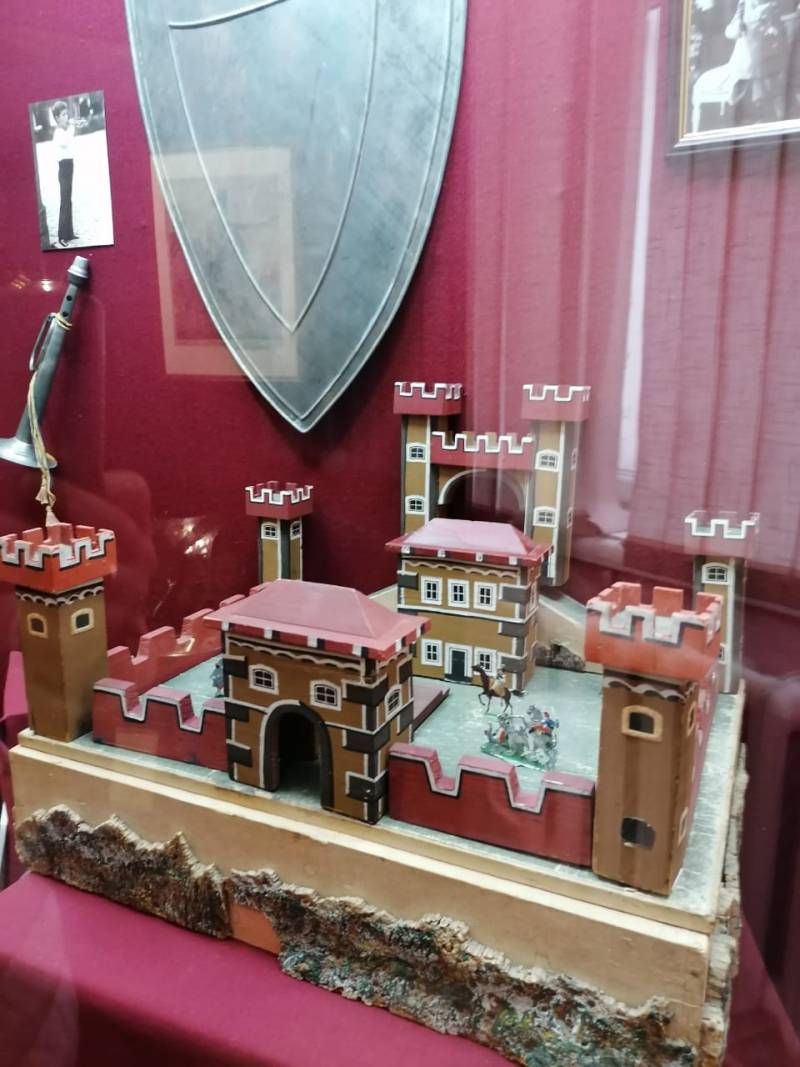 And it so happened that from 1918 to 1931 in the Alexander Palace in Tsarskoe Selo there were open expositions: "Children's half", "Room of the younger princesses" or "Heir's room", which recreated the appearance of the rooms of the last sovereign of the emperor and his family. It is clear that they also had toys. But after 1931, everything that was tsarist and did not fit into the eerie appearance of "monarchs oppressing the working people", apparently decided to remove and the exposition was curtailed. And toys ... were distributed to orphanages and orphanages.

But something that was not given to orphanages was donated to the toy museum in 1932. And they were kept in the storerooms of the Zagorsk Research Institute of Toys and in the Museum-Reserve, which was opened on the territory of the Lavra. Without specifying that these items are special. "Dolls of the XIX century" - that's the whole explanatory inscription. But there were people who established their origins and restored them, and one of the restorers even cut off her hair to make the hairstyle of one of the surviving dolls, which originally had it from natural hair! 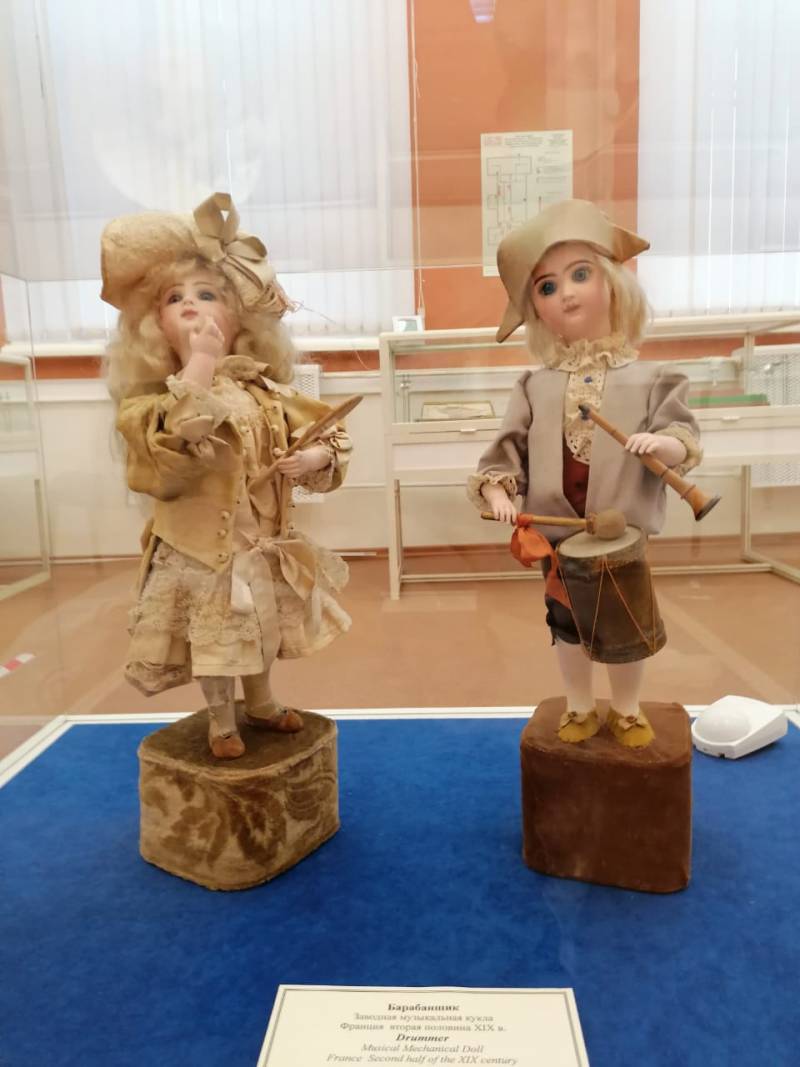 The Drummer is a clockwork musical doll of the second half of the XNUMXth century. France 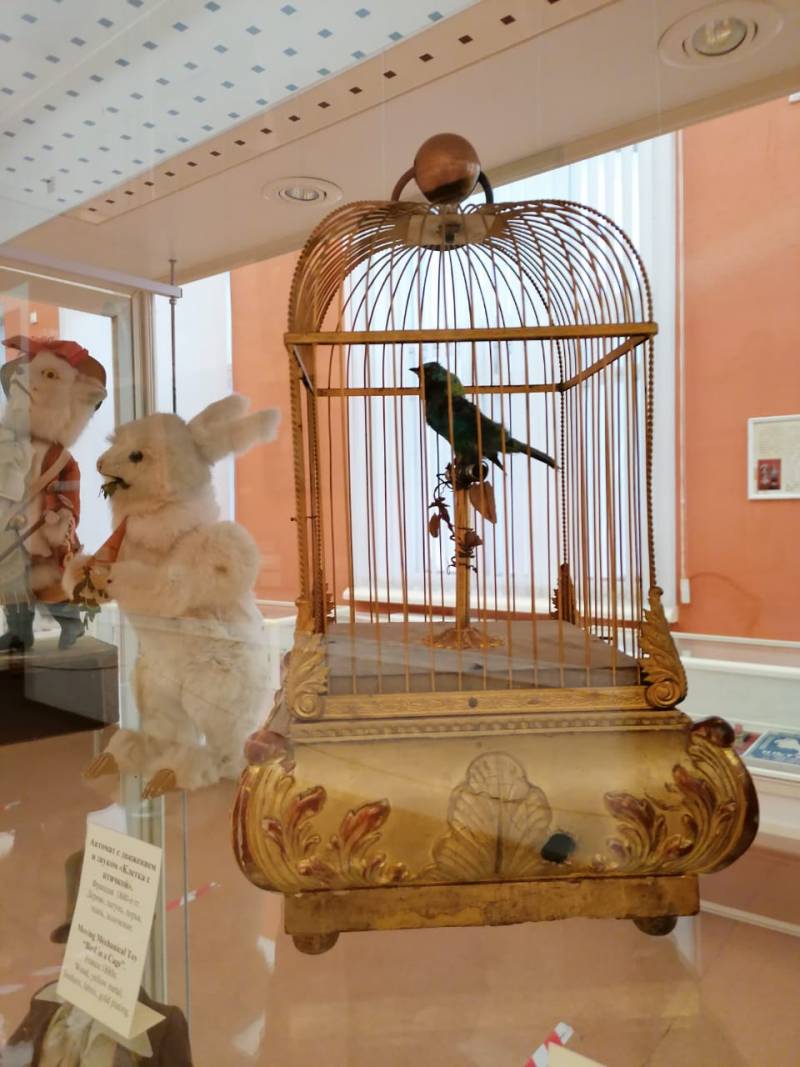 "The nightingale is a songbird." Also a unique clockwork toy
It is interesting that many of the toys of the children of the last Russian sovereign were educational! For example, Tsarevich Alexei had a watchmaker, from which he independently assembled a clock. There was a board game "Walker" - "A Journey through Russia" of the 1885 release, and a home table theater, which allowed to play the opera by M.I. Glinka "Life for the Tsar". 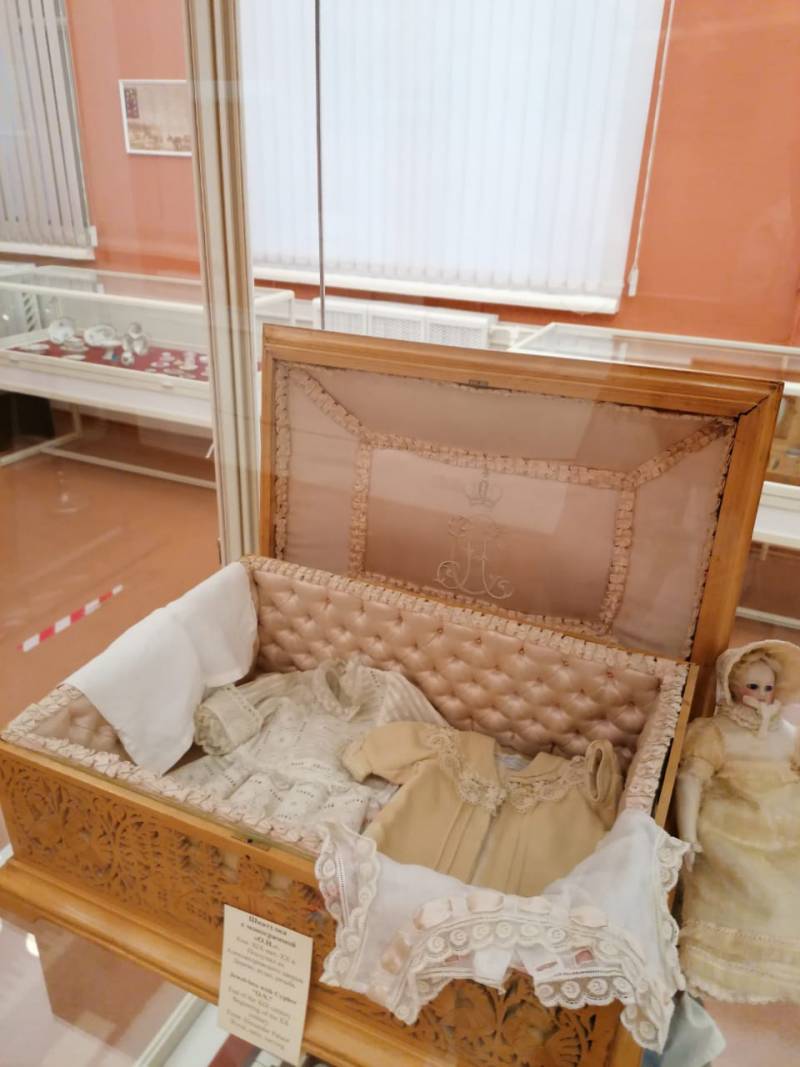 Doll dowry
The grand duchesses had their own sets to sew doll dresses. It should be noted that the children of Nicholas II had a lot of dolls dressed only in the costumes of peasants, for example, peasant dolls in the costume of the Tula province and the Moscow province, but there were also dolls in the costumes of foreigners: such as "Tatar", "Armenian" and "Ossetian". That is, the royal children from childhood got acquainted with the national culture of their peoples, which is more than correct. Who wants to be the owner, he should get acquainted with his economy from a young age, including through the life and culture of his subjects.

The dolls of the Grand Duchesses from Germany, France, England, and even Russia were delightful, with delicate porcelain faces, thin, like living fingers, in muslin, silk and cambric dresses, trimmed with amazing lace and embroidery.

Moreover, the girls sewed many dresses for their dolls themselves. And the Empress Alexandra Feodorovna herself taught them to sew and embroider. It would seem that the queen, but ... taught her daughters to work. And the fruits of this upbringing showed itself, in the time of the disaster of the war of 1914, the senior grand duchesses went to work in a hospital, where they did not shy away from the hardest work.

Some dolls were made abroad, but to order, reflecting the native motives. For example, a doll in the form of a soldier of the Semyonovsky Life Guards regiment was made in Germany around 1910. 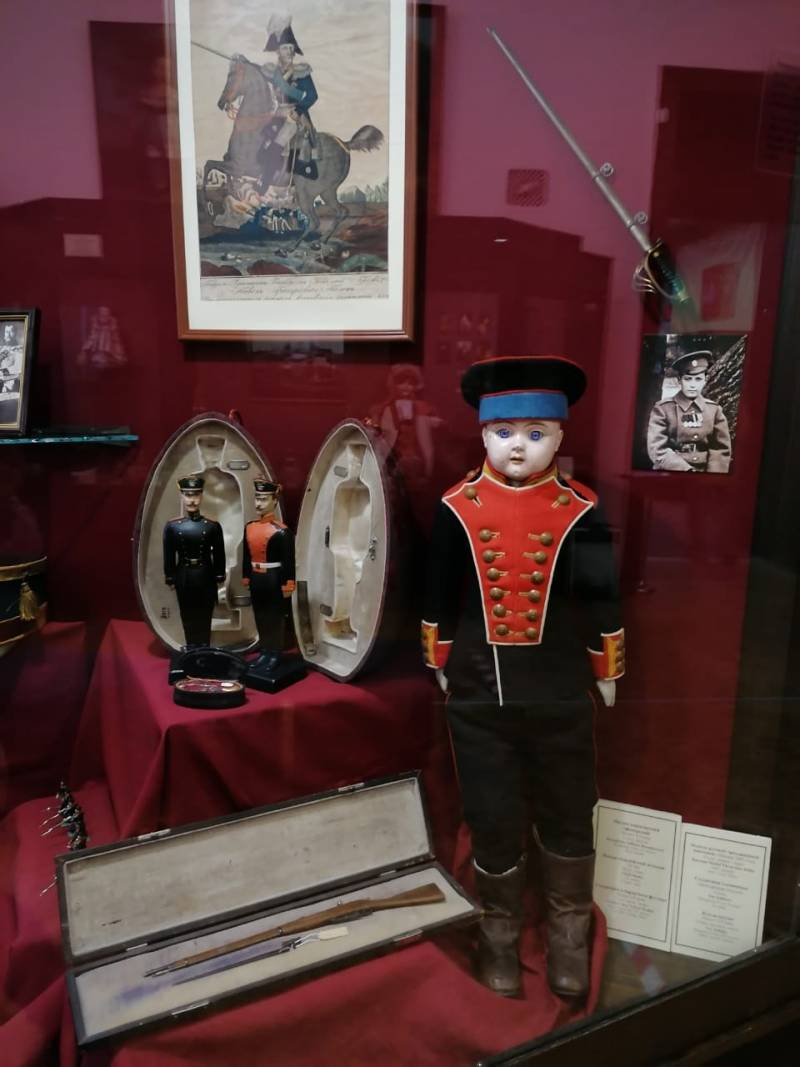 This is the doll. Materials: metal, glass, fabric, leather. Figure height 65 cm
Since there are dolls, they need to eat and drink tea - this is a must. Therefore, the grand duchesses also had a magnificent Meissen porcelain tea set, in which there were cups, teapots, an elegant sugar bowl with a milk jug, and small spoons.

The young heir suffered from hemophilia, a hereditary disease in which blood does not clot. So he could seriously suffer from the slightest injury, and even just from a fall. Therefore, they tried not to keep dangerous objects in his playroom. But ... with all this, Alexei was brought up primarily as a military man who would rule not only the empire, but also command the army. Therefore, he had a toy three-line rifle of the Mosin system, a toy battleship "Sevastopol", sea signal flags. Well, and what our modern children would also like: an electric railway with stations, houses, tunnels, carriages and a steam locomotive. 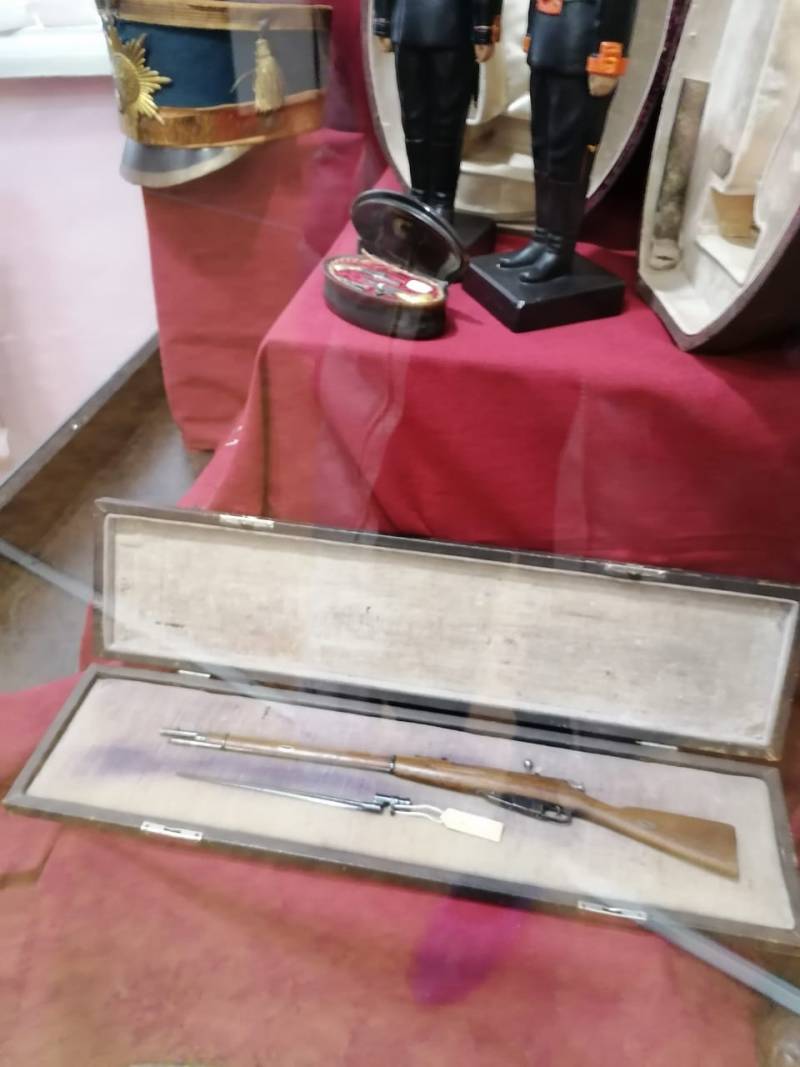 Here it is - Mosin's toy rifle!
The Tsarevich also had a whole squadron, starting with the toy "Novik" - not at all similar to its prototype, and ending with such battleships ... 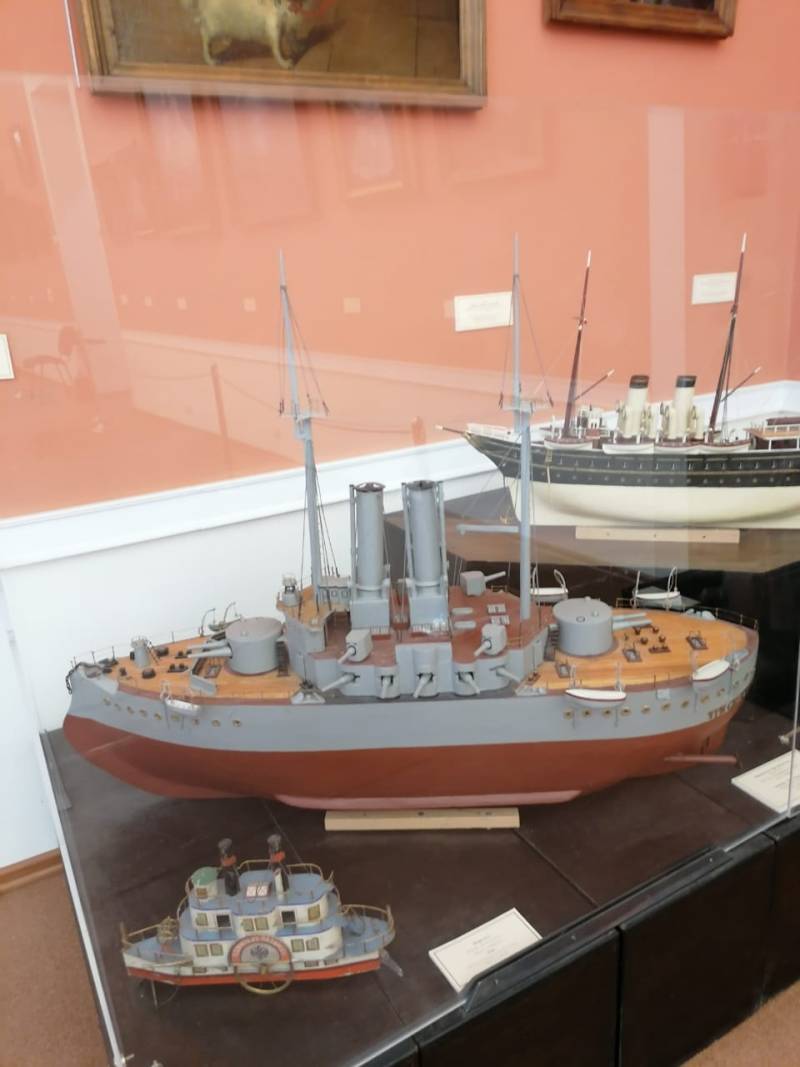 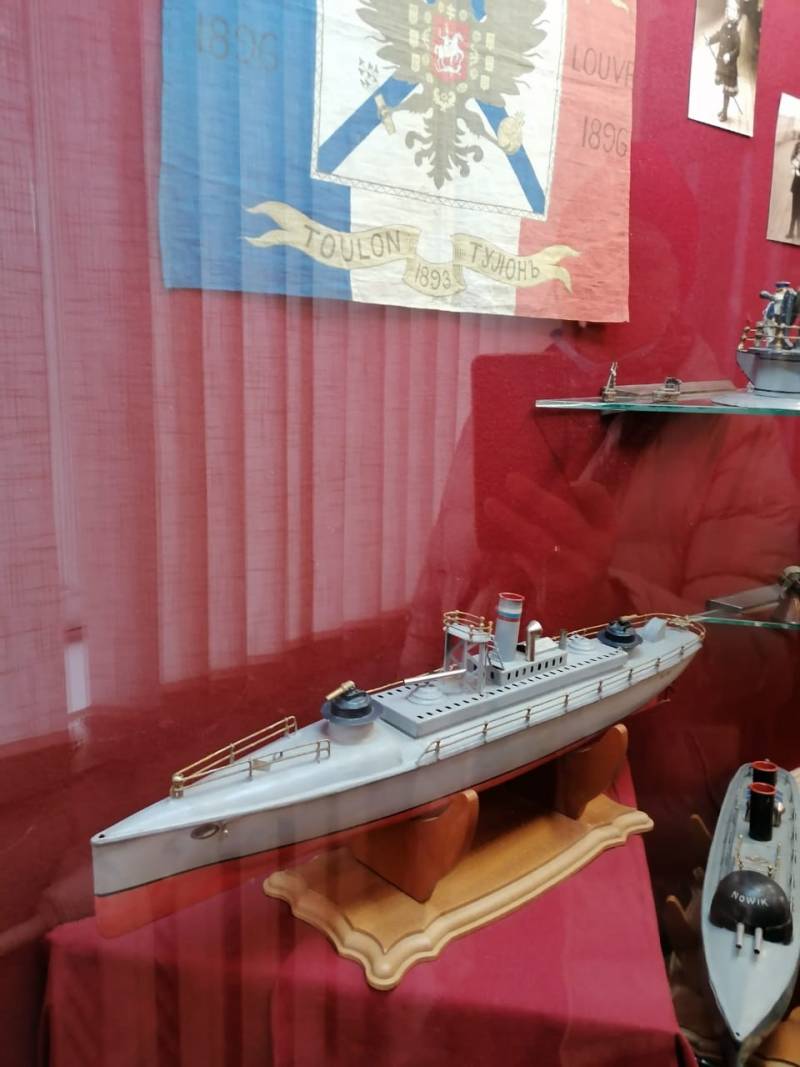 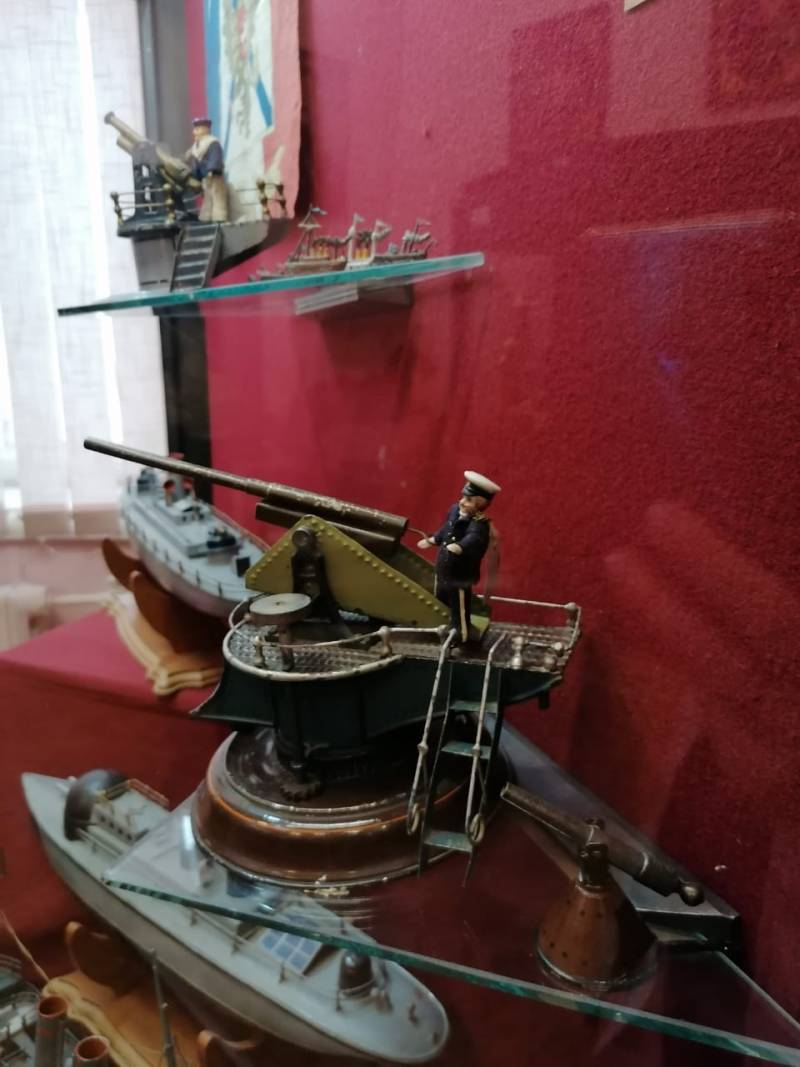 And this is Coastal Defense! 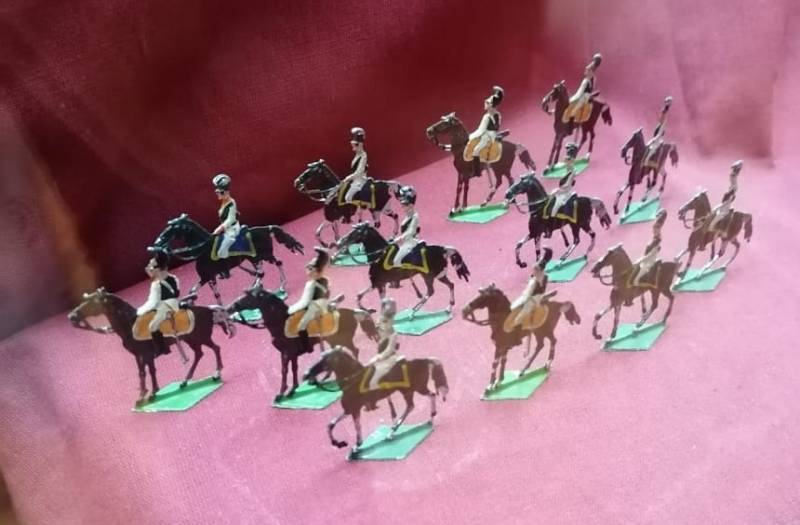 The boy also had soldiers, and they were very different, not only large, but also flat - "Nuremberg" ... 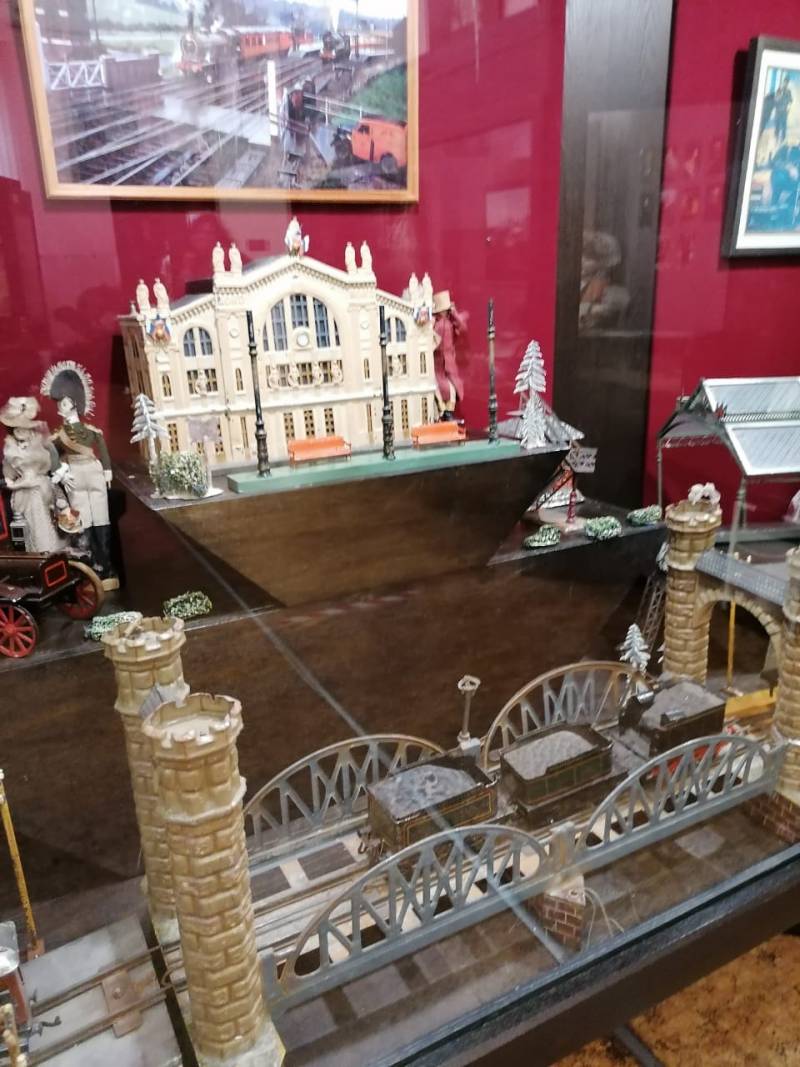 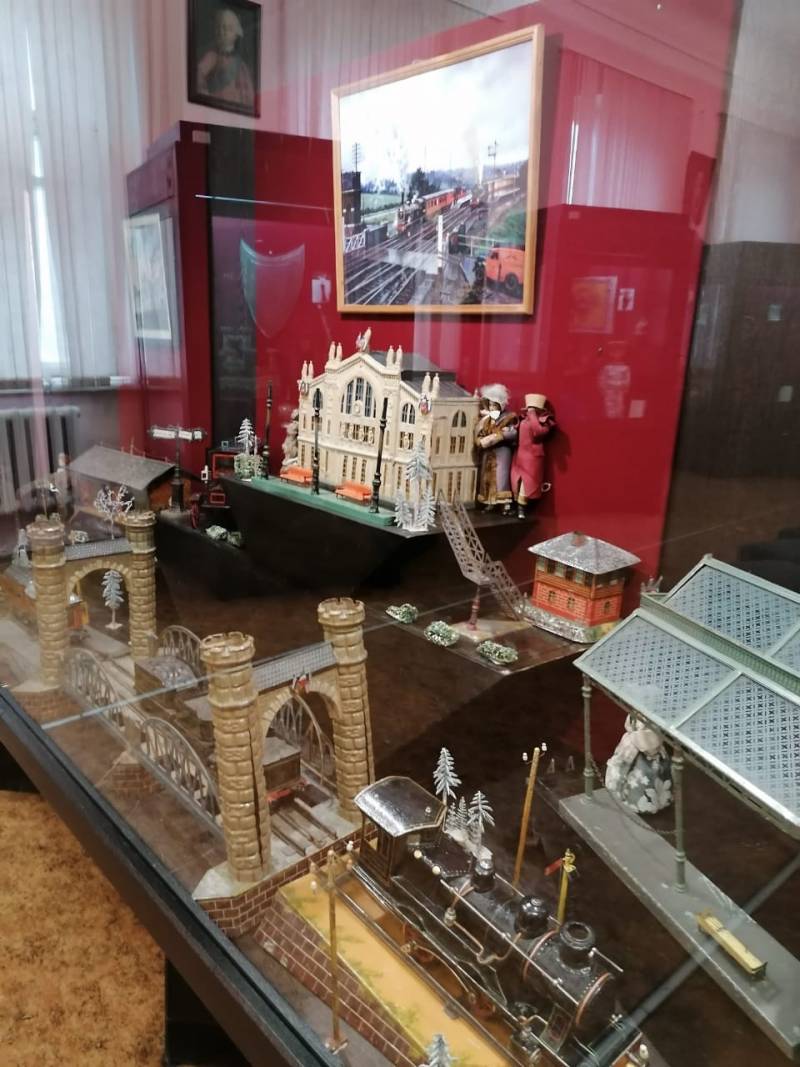 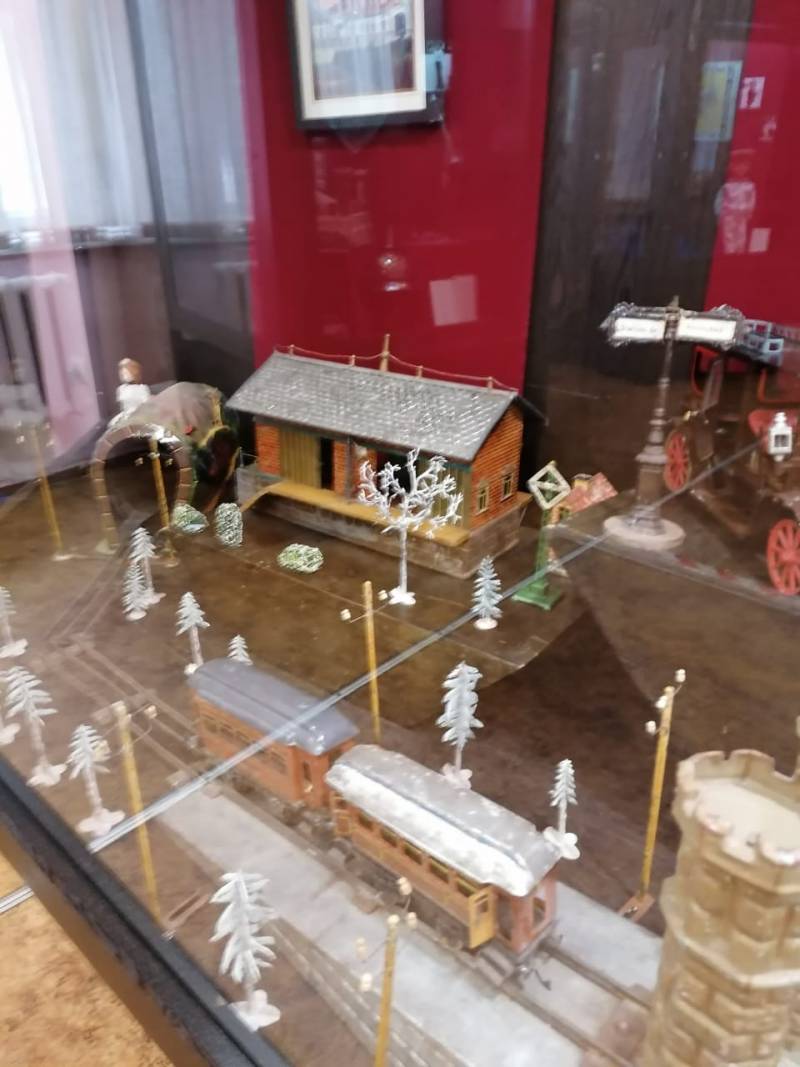 Railroad tracks and wagons
Outdoor sports develop kids! This commandment was strictly observed in the royal family. Children played bowling pins, badminton, croquet, skated, bicycles, played Indians in nature - fortunately, wigwams, canoes and other accessories of Indian life they had the most real: a gift from an Indian leader named Spotted Tail to Grand Duke Alexei Alexandrovich, who was the fourth son of Alexander II, brother of Alexander III and uncle of Nicholas II, and with whom the prince, together with the legendary Buffalo Bill, hunted on the prairie of Nebraska. 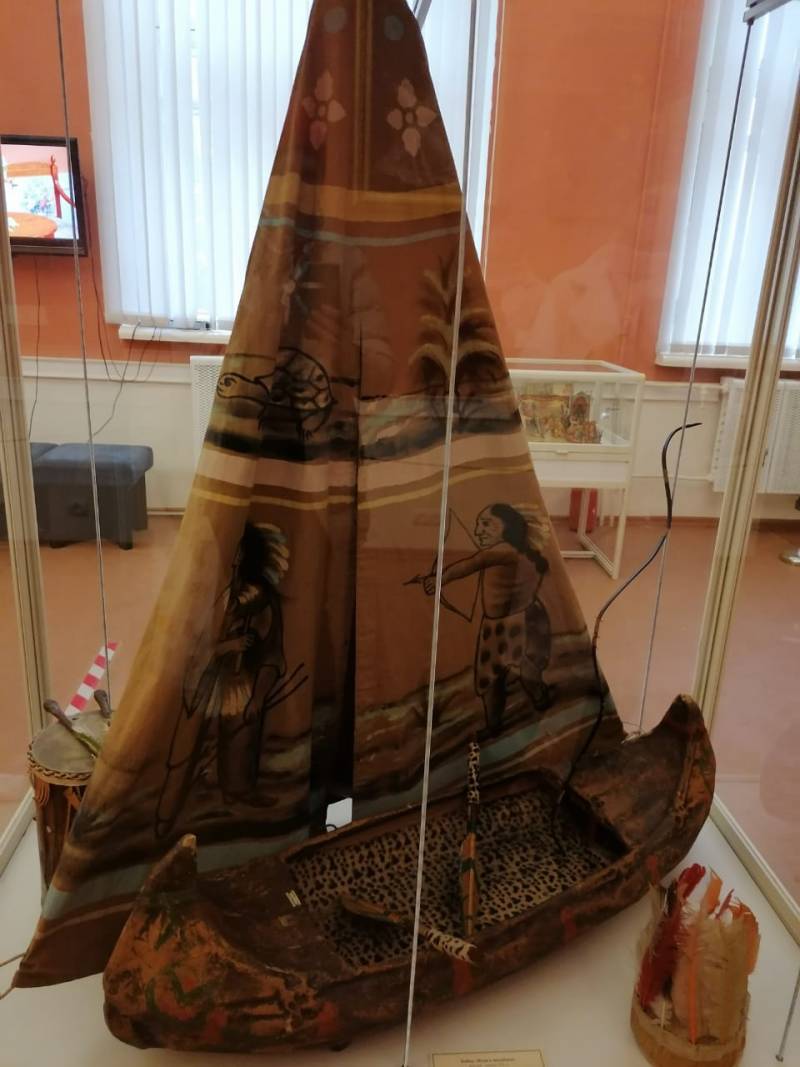 Indian wigwam and canoe
So this museum is interesting not only for children, but also for adults. There will be an opportunity - try to be sure to visit it!