Faddey Faddeevich Bellingshausen - "a skilled officer and a man of warm soul ..." The opening of the ice continent

20 September 2012
3
Bellingshausen Faddey Faddeevich (1778-1852) was from Ezel Island (Estonia). He came from a family of Ostsee nobles. Known as a navigator, twice made a trip around the world. The main merit of the traveler, from early youth to his death, who was continuously at sea was the discovery of Antarctica, together with MP Lazarev. 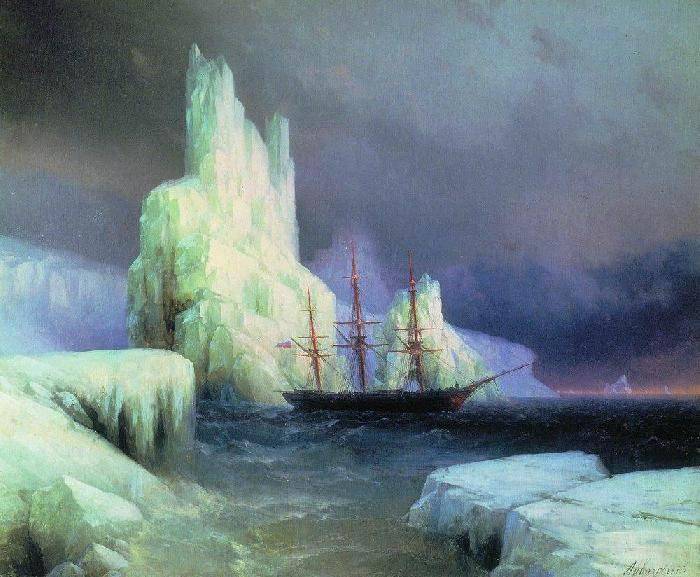 Dreams of sailing originated in Faddey from childhood; about himself Bellingshausen said that he could not live without the sea, like a fish without water. After graduating from the Kronstadt Naval Cadet Corps, he becomes a midshipman. The first major voyage, in which a young officer took part, took place in 1796. Then, for the first time, Faddey felt the spirit of long-distance sea crossings and visited far England.

Bellingshausen was 25 years old when he was accepted into the crew for the first round-the-world voyage of Russian ships. He served on the ship "Hope". The expedition was commanded by Adam Johann von Krusenstern (more familiar - Ivan Krusenstern). Since Bellingshausen was passionately fond of science, on this journey he was entrusted with mapping. Later, all the maps compiled following the results of the expedition were included in the Atlas of the Journey Around the World compiled by Kruzenshtern. After successfully completing the journey, the Kruzenshtern team Bellingshausen conducts cartographic studies on the Black and Baltic Seas, compiles astronomical maps. Geography was his passion, he with great ecstasy wrote down and sketched everything new.

In the 20-s of the XIX century in Russia is preparing a new voyage around the world. Krusenstern recommends appointing Bellingshausen, an enterprising and skilful officer, as the head. And at the beginning of 1819, he heads the expedition. Its purpose was designated as “search for the sixth continent”. Together with Bellingshausen, the eminent explorer Mikhail Petrovich Lazarev participated in the voyage. And in June, 1819 from Kronstadt departed the sloops Mirny and Vostok and rushed to find the mysterious continent. Bellingshausen took command of the Vostok. At that time, he turned 40 years, and behind him was almost thirteen years of maritime experience.

Bellingshausen is heading for Rio de Janeiro. Further, its path lies to the south. The expedition explores Sandwich Islands, New Georgia Island, previously discovered by James Cook. By January, the ships arrive at the shores of an unknown southern continent covered with ice.

The date of the discovery of Antarctica is 16 in January 1820. It is on this day that the expedition approached the continent in the area of ​​the present Coast of Princess Martha. Seen land Bellingshausen called the icy continent. For the second time, sailors saw the January 21 shore. The huge glacial walls, which constantly fell into the water - January - the height of the Antarctic summer - did not allow them to land. During the summer, mariners explored the coastal shelf of Antarctica. They managed to cross the southern polar circle several times. The mainland was circled. In early February, during the bad weather, Bellingshausen came close to Princess Astrid Beach. Constant snowstorms and snow drifts did not allow us to consider the coast properly. By March, with a gradual decrease in air temperature and coastal waters, the accumulation of ice off the coast of Antarctica intensified, and swimming became difficult at first, and then simply impossible. The ships Bellingshausen headed for Australia. 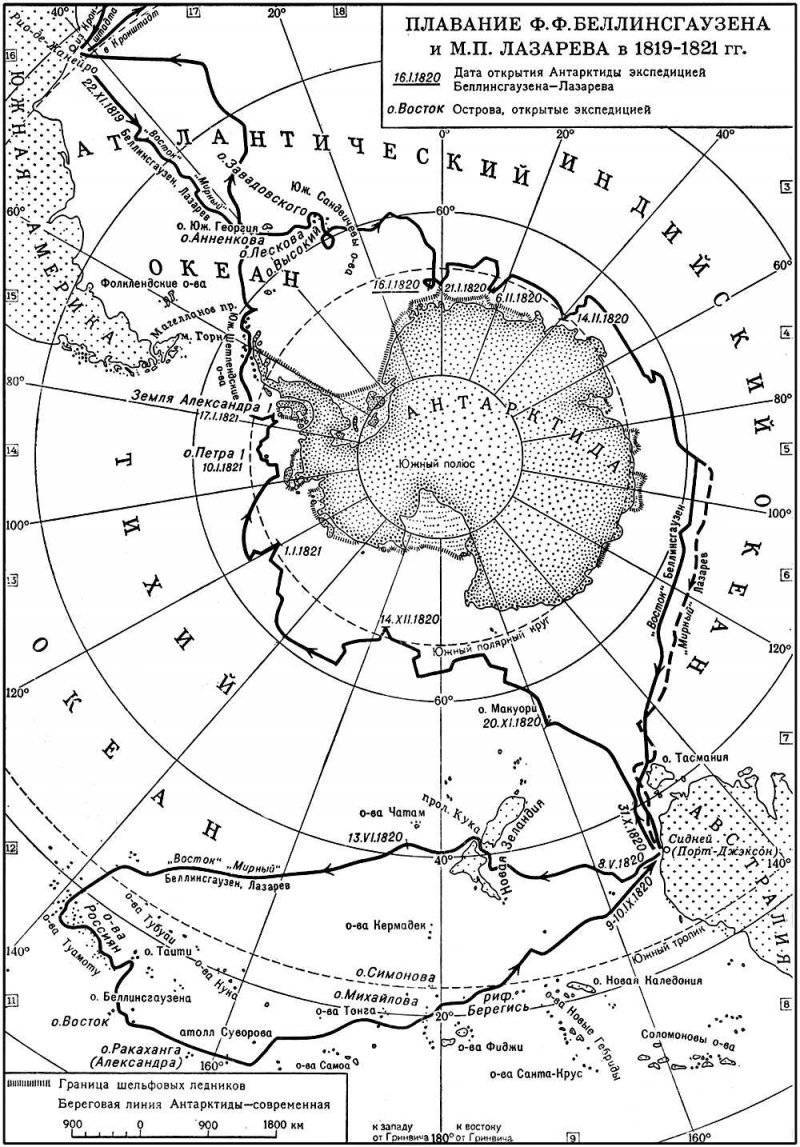 However, this research was not completed, they continued in the Pacific Ocean. Bellingshausen studied the Tuamotu Archipelago, where the 29 islands were discovered. All of them were named after outstanding state and military leaders of Russia.

In September, 1820 resumed research on Antarctica. The shore of Alexander I was discovered, the island of Peter I got its name. After this, the expedition arrived at the South Shetland Islands. At this time, the discovery of a group of islands, which received the names of the battles of World War 1812 of the year and outstanding Russian navigators, was accomplished.

July ended 1821 of the year. The Bellingshausen expedition headed for Kronstadt. Behind heroic sailors, there were 50 thousand miles and 751 a day's journey. Conducted deep climatic and hydrographic studies, collected unique collections, valuable for zoology, ethnography and botany. Bellingsgausen carefully recorded all sorts of information in his diary - information about the customs of local peoples and everything that he and his team had seen, and submitted to the Admiralty a collection of his travel records with applications of various drawings and maps, the manuscript was published in 1831 year.

Bellingshausen became a real idol for many travelers and explorers. Comrades spoke of him as a bold and decisive man. In an extreme situation, a skilled sailor showed surprising composure. He knew his business very well and was distinguished by humanity - he had never used corporal punishment, he was attentive to his subordinates. The success of the expedition and the well-being of his subordinates were his priorities. However, he was inclined to take risks. So, Lazarev noted that Bellingshausen is exposing the ship to danger, maneuvering between ice fields by large passages. Bellingshausen also claimed that he was in a hurry because he thought only about not getting stuck with the team in the ice with the onset of spring.

After the discovery of North and South America and Australia, Antarctica was the final Great Geographical Discovery. Prior to this, no one seriously assumed that there was a whole continent waiting for discovery. After the voyage of the Russian discoverers Bellingshausen and Lazarev, there are no undiscovered large continents in the world. 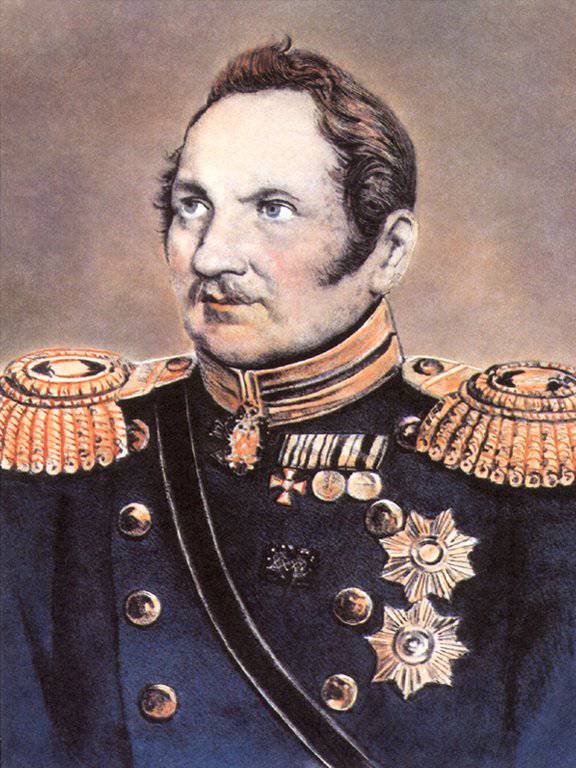 For the greatest services to the Motherland, Bellingshausen receives first the title of Rear Admiral, then, in 1826, becomes the head flotilla The Mediterranean Sea. From 1839 he was appointed to the post of military governor of Kronstadt and the chief commander of the Kronstadt fleet, and by the end of his life he became an admiral and participated in the war with Turkey, leading a naval siege.

Bellingshausen is known for his considerable contribution to the construction of new harbors, ports, docks, and also for his concern for the personnel of the fleet. First of all, he took care of the sailors. On his initiative, the meat ration was significantly increased in the fleet. After the admiral's death, a document was found in which it was proposed to plant early-flowering trees in the harbors so that those leaving the sea could see the spring. To raise the cultural level of seafarers, he created a library in the port. Bellingshausen attached great importance to training, improved artillery shooting skills, passed on the skills of maneuvering to seamen responsible for navigation.

The great navigator died in 1852. They buried Bellingshausen in Kronstadt, where he was erected a monument in 18 years. The names of the great discoverer were islands in the Pacific and Atlantic oceans, the sea, a cape on Sakhalin Island, and an ice shelf in Antarctica. In 1968, the opening of the first Soviet research station on the West Coast of Antarctica took place at Cape Fildes. She also received the name Bellingshausen.