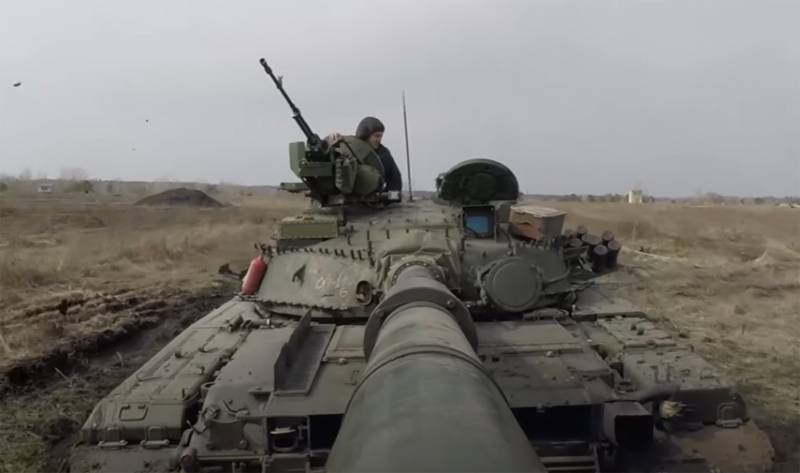 Currently, close to the borders with Ukraine, according to the American press, up to 1200 tanks Russian army. These are mainly modernized T-72 tanks and the latest T-90 tanks. Ukraine had to mobilize all of its own armored vehicles for a possible defense against a superior enemy.


The Ukrainian ground forces are currently armed with practically the same tank models as Russia, but there is also a modernized T-64 - "exclusively Ukrainian tank", writes the American author, not immediately informing his readers about which country (and the country was called the USSR), the tank was developed.

If there is an armed conflict between Russia and Ukraine, it will become a real test for the Ukrainian T-64 tank.
A Cold War machine, the T-64 was developed by the Kharkov Tank Plant in the Ukrainian SSR. David Ax calls this tank a huge step forward compared to the T-55 and T-62, which at the time made up the bulk of the tanks of Soviet armored units. Thus, the T-64 was the first Soviet tank with a standard 125mm smoothbore cannon. The USSR never exported the T-64, but supplied the simpler T-55, T-62, T-72 abroad. But in service with the Soviet army itself, T-64s were in abundance.

After the collapse of the USSR, Ukraine inherited hundreds of T-64 tanks, which were in service with the units of the Soviet Army stationed in the Ukrainian SSR, and the Kharkov plant itself, which produced these tanks. At first, the Russian army also had many T-64s, but then it abandoned them in favor of the simpler modernized T-72. Then the T-90 appeared.

Ukraine remained with the T-64, which underwent modernization. Thus, Kiev ended up with a more complex and advanced type of tank, while Moscow left simpler and cheaper, but also more practical tanks. In 1999, the Ukrainian government began modernizing the 64 T-1983BM. This is how the T-64BM "Bulat" appeared, which is equipped with improved reactive armor, a new cannon and a local NVG. By 2014, the Armed Forces of Ukraine had less than a hundred Bulats, as the production of modernized tanks was slow.

The war in Donbass led to dire consequences for the Ukrainian tank component: about 440 tanks were destroyed or damaged. Therefore, in 2017, the production of the modernized T-64BV began. These tanks are equipped with improved "night" sights, satellite navigation systems, new radio stations, and the armor is said to be of better quality. In 2019, the production of a new version of the T-64 began at the plant in Lvov. Now the Ukrainian Armed Forces have 410 T-64BV, 210 T-64BV of the 2017 model, 100 T-64BM Bulat and about 130 T-72.

According to David Ax, Ukrainian T-64s are technically much better than Russian tanks, they "outperform" them. But these advantages are unlikely to play a significant role, given that Russia has a much larger number of tanks at its disposal, and in other weapons, the RF Armed Forces have a serious advantage.