General Atomics Mojave: a potential revolution in the world of drone drone 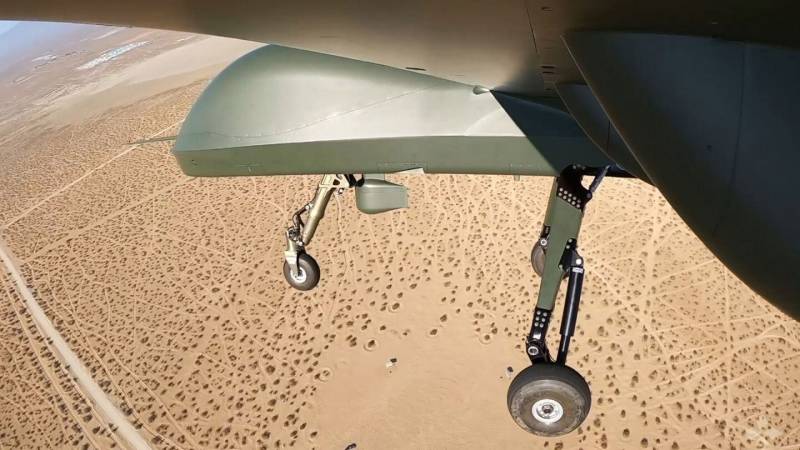 The United States is the world leader in creating shock UAV, although Turkey, Israel and, probably, the People's Republic of China are serious competitors. Another proof of this was the presentation of the new unmanned vehicle Mojave, developed by General Atomics. Based on the MQ-1C Gray Eagle, it is optimized for short takeoffs and landings with an emphasis on supporting various types of expeditionary missions. 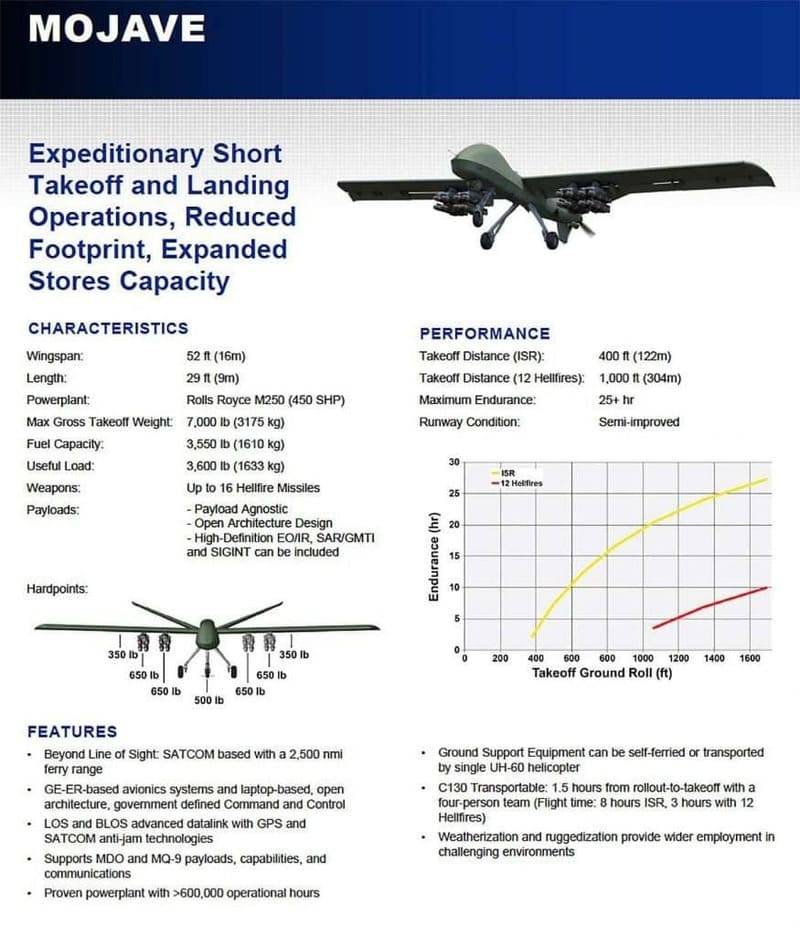 The new wide wing with advanced mechanization gives it a look that makes it akin to the OV-10 Bronco, an American light attack aircraft and reconnaissance aircraft designed for use in counter-guerrilla warfare. The Mojave wing has received deflectable slats and double-slotted flaps. The wingspan of the drone is relatively small at 15,8 meters. For comparison: the MQ-1C is 17 meters. 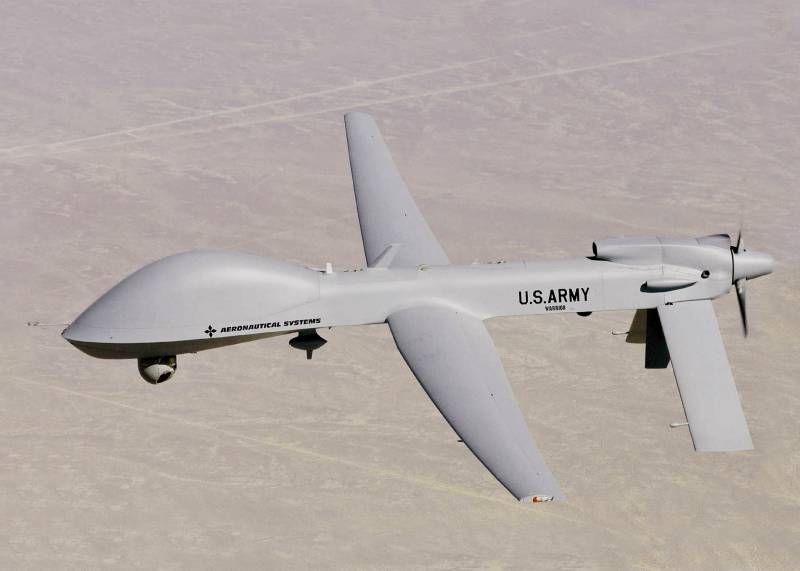 General Atomics says that due to this feature, Mojave can be used from ships. Moreover, it will not need a starting catapult. This is critically important when it comes to universal amphibious assault ships of the "America" ​​type or the older "Wasp".

The Mojave is known to have made its first flight in the summer and has conducted a number of flight tests since then. The tests were not advertised, although it is no secret to anyone that the United States is constantly working on new attack UAVs. Mojave reportedly took off and landed from a site less than 150 meters long. At the same time, with a minimum take-off weight, a take-off and landing distance of about 90 meters can be achieved. The UAV's minimum landing speed is about 85 kilometers per hour. One of the features of the Mojave is, among other things, the extremely low stall speed.

According to the company, the "foundation" for the future UAV began to be laid about two and a half years ago, and active work on it has been going on for the last two years.

“This idea came about when we were thinking about how to become independent from the runway,”
- приводит edition of The Drive by David Alexander, President of General Atomics Aeronautical Systems, Inc.

The decision to switch to a short take-off and landing scheme was made after the company determined that it would be too difficult to achieve its goals using a vertical take-off and landing configuration. Without a doubt, such an approach would be more costly and potentially more risky from a technical point of view. 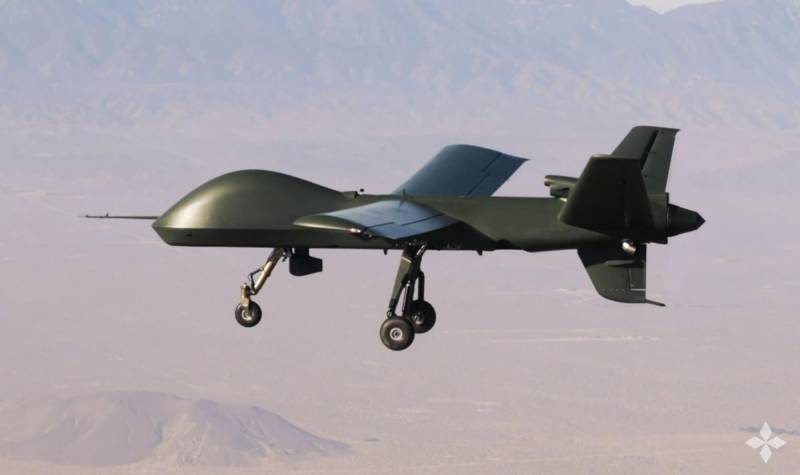 The Mojave fuselage has the same layout as the Gray Eagle UAV, which itself became the development of the famous MQ-1 Predator and MQ-9 Reaper. The new drone inherited avionics and flight control systems from Reaper and Gray Eagle. The tail section of the MQ-1C type was abandoned, making it similar to the one used on the Reaper UAV. Another important difference was the chassis, which was converted to work in difficult field conditions, in particular, to overcome sandy areas.

The Mojave is not a stripped-down version of conventional strike UAVs. According to the blog of the Center for Analysis of Strategies and Technologies bmpd, it received a 250 horsepower Rolls-Royce M450 turboprop engine. The flight duration is "over 25 hours". However, of course, it will not work to combine all the advantages of the UAV. Achieving this duration requires a lot of fuel, which will lead to an increase in take-off weight, which in turn will lead to the need for a longer section of the runway.

The UAV's payload is 1 kilograms. One of the loading options assumes 630 (!) Hellfire guided missiles at once. That is how much the AH-16 Apache attack helicopter can take, and the MQ-64 Reaper UAV is capable of carrying eight such missiles. 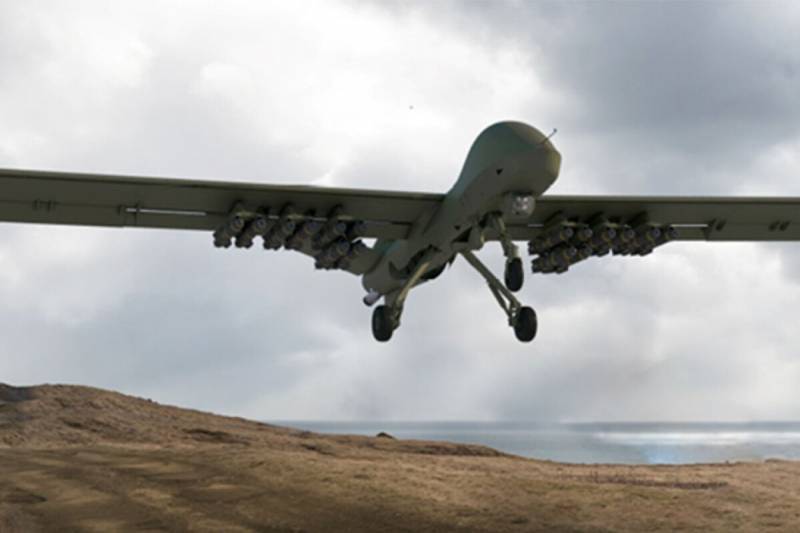 The Gray Eagle and its improved version of the Gray Eagle Extended Range (GE-ER) can be equipped with four underwing pylons and one central pylon. Mojave, in turn, has six underwing suspension units and a center holder.

In terms of weapons, the Mojave is still not unique. Earlier, China showed the CH-5 drone (Tsaihun-5). The maximum take-off weight of the UAV is estimated at 3,3 tons, of which one ton is in service. The total number of air-to-ground missiles can be 16 units. At the same time, the CH-5, as far as can be judged, is not intended for use in Spartan conditions, so it will not compete directly with Mojave. 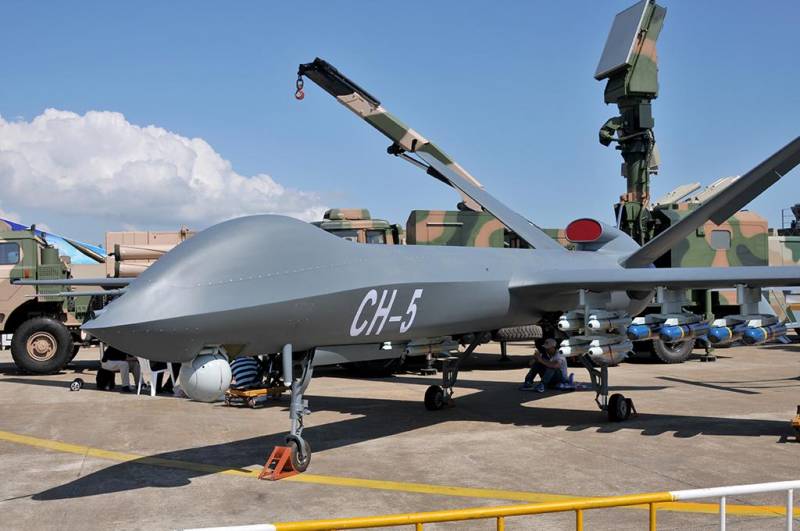 Now it is difficult to assess the potential of Mojave in the global market, but there is little doubt that it will find its buyer. General Atomics has already announced strong interest in UAVs from the US military and foreign customers.

Against the background of Russia

Undoubtedly, the drone will be compared to Russian attack UAVs.

In recent years, the country has shown obvious progress in this direction, while clearly inferior to leaders such as the United States. The main Russian novelty can be called "Orion" (aka "pacer"). Back in 2020, it was reported about the first Orion unmanned complex, transferred to the troops: it was about two control vehicles and three drones. Later, they showed footage of the use of UAVs in Syria. It was asserted, among other things, about the fulfillment of shock missions.

And yet, the capabilities of the UAV are relatively modest by modern standards. The drone can take a payload (combat) load weighing up to 200 kilograms (the mass of one anti-tank guided missile is about 50 kilograms). 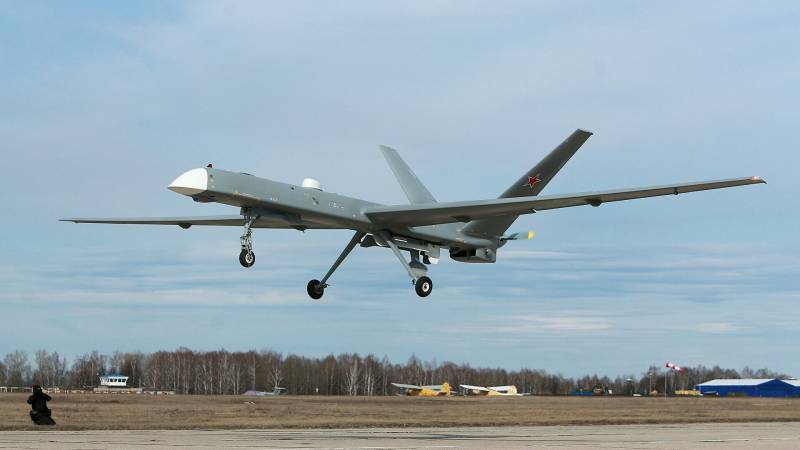 Photo: kronshtadt.ru
To be fair, Russia has made some progress in developing miniature aviation means of destruction. It is known that the Orion's arsenal should include, in particular, the KAB-20 and KAB-50 corrected aircraft bombs, the UPAB-50 guided gliding bomb and the Kh-50 aircraft guided missile.

Real progress will only be achieved with the creation of larger UAVs, such as Bayraktar Akıncı, capable of theoretically taking 1 kilograms of payload.

Promising Russian UAVs, such as "Thunder" or "Okhotnik", will not be inferior to Mojave in terms of combat load.

“General Atomics has announced 16 Hellfire missiles to equip its vehicle. The payload weight of the S-70 "Okhotnik" can be up to 3 tons, the "Thunder" - 2 tons. The combat load of the MQ-1C Gray Eagle is less - 1 450 kg ",
- notes military observer Mikhail Khodarenok in material Gazeta.ru editions. 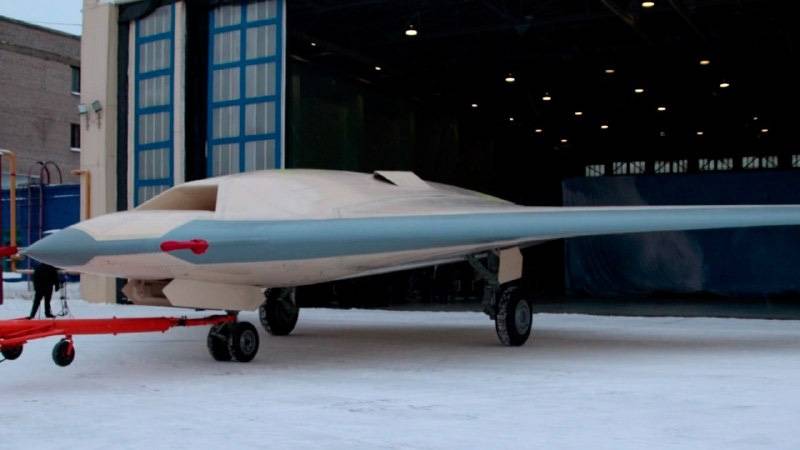 Photo: rostec.ru
At the same time, in the case of Hunter and Thunder, we are talking about extremely expensive jet UAVs, which are now most appropriate to consider as an experiment or investment in the future. The real next step after Orion for Russia will be Sirius, which is similar in layout to the Turkish Akıncı. The creation of the first prototype of the UAV will be completed next year.