The peasant kingdom of Nestor Makhno 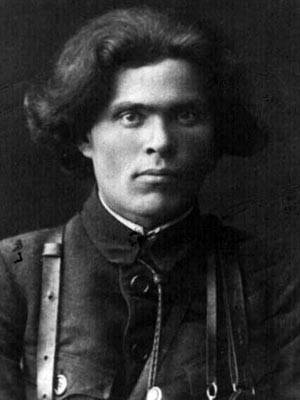 On July 25, 1934, an emigrant carpenter named Nestor Ivanovich Makhno died of bone tuberculosis in a Paris hospital. The deceased was 45 years old, three days later he was cremated and buried in the Père Lachaise cemetery. This is how it ended история the builder of communism in a separate Gulyaypole district of the Yekaterinoslav province and the history of Utopia in the territory of Little Russia.

Opinions about him are different, for example, this:

“The most famous is the myth of the Makhnovist freemen. But what kind of freedom, if Makhno's counterintelligence worked harder than the Whites and Reds combined? There is also a myth that the Makhnovists were ideological anarchists. However, it is not. Makhno kept the visiting urban anarchists with him as a screen, but actually relied on the peasant leaders, former non-commissioned officers from the fronts of the First World War, thinking in terms of community. They tried to establish a dictatorship of the village over the city, but in the twentieth century, such ideas had absolutely no prospect. This was the road to the uniform Middle Ages, and no one would have allowed such a gap to form, living off agriculture, robbing cities and attacking trains. Although, of course, at a certain stage, the Makhnovist fighters, who knew the local conditions well and received horses and fodder from their relatives, were very successful. "
And it's hard to argue - in the twentieth century, the village is doomed to fight the city. But one must understand - in those years, 13% of the population lived in the vastness of the former Russian Empire in cities, more than 50% of the inhabitants were illiterate, and the collapse of not only the imperial power, but also those bonds that kept the empire united, required new ideas and new leaders.

And Nestor Ivanovich with his biography came in just the way. Time required a peasant leader, and he appeared exactly in those places where they still remembered the Cossack freemen.

And Makhno was born in Gulyaypole, in 1888, in a poor peasant family and was left without a father early. All education - a two-year public school, then work, there was no one to support and train the future leader.

It is not surprising that an intelligent young man already at the age of 17 joins the circle of anarcho-communists. There were a lot of them then, revolutionary movements, and different, but the anarchists took on their simplicity of ideas and actions. Especially in the peasant region of the period of the First Russian Revolution, where all the contradictions collected over the centuries climbed to the top.

At first, the young anarchist was only scolded, the time was such that keeping weapons it went on for a trifle, but the murder of an official of the military administration became a point, and as a result, Nestor Ivanovich was sentenced to death. The court, by the way, as a result treated humanely and "Stolypin's tie" (gallows) was replaced by life hard labor. At that time, luck, in 1908 more than 800 people were executed in Russia.

And the hard labor itself benefited the young anarchist, he sat with political ones, was able to learn, replenish the baggage of political knowledge and become, finally, not an enthusiastic young man without knowledge in his head and advocating all good against bad, but a revolutionary.

And in 1917, February released everyone, including Makhno.

After leaving prison, Nestor Makhno immediately left Moscow and went to his native Gulyaypole, where he staged a revolution.

He left his small homeland - a youth and a radical, returned - an honored revolutionary. The dispersal of the Zemstvo, the redistribution of land, the creation of the Black Guard and the absolute rejection of half-measures - this is all Makhno in 1917.

And the people followed him, for the anarchist, willy-nilly, was building a state. Let it be a kind, albeit a peasant state, but a state. Against the background of the epic mess in Little Russia, where there were temporary, white, red, yellow-blakitny and just gangs, Gulyaypole looked like a kind of oasis.

In January, Makhno became the head of the Revolutionary Committee, but the arrival of the Germans forced him to dissolve the Black Guard and leave for the RSFSR. However, for a short while, after talking with fellow party members and meeting with Lenin, Makhno forms something like a program in a letter to like-minded people:

“Together we will deal with the destruction of the slave system in order to enter ourselves and lead our other brothers on the path of the new system. We will organize it on the basis of a free public, the content of which will allow the entire population that does not exploit the labor of others, freely and independently of the state and its officials, even the Reds, to build their entire social and social life completely independently in their own localities, in their midst ... Long live our peasant and workers' association! Long live our auxiliary forces - the disinterested working intelligentsia! Long live the Ukrainian social revolution! Yours, Nestor Ivanovich. "
And against the reds, and against the whites, or rather, against the dictatorship of the city over the village and makes his way to his homeland. And the posts of the invaders and Warta Skoropadsky burst into flames, the dashing horsemen were elusive, the peasants protected and fed them, receiving in return protection and part of the trophies.

Soon, Makhno's army grew to 6 people, and he became an iconic figure, a symbol of resistance: what to the Germans, and what to the hetmanate. Makhno himself did not particularly share them. At the same time, he acquires associates, like Theodosius Shchus, a sailor of the Black Sea fleet.

As a rule, these partisan detachments, consisting of 20-50-100 horsemen, well-armed peasants, made a quick, unexpected raid on a landowner's estate, on state guards, killed all the enemies of the peasants and disappeared.
And glory. Meanwhile, Germany fell, the Germans left, and Petliura came to Kiev, who began to take control of the Yekaterinoslav region. And Makhno, together with the Bolsheviks, crushes the Petliurists and takes Yekaterinoslav, his troops become part of the 3rd Army of the Red Army, but could an anarchist be part of the army, telling his fellow countrymen:

“To die or to win — this is what the peasantry of Ukraine is facing at this historical moment. But we cannot all die, there are too many of us, we are humanity; therefore we will win. But we will not win so that, following the example of past years, we pass our destiny to the new bosses, but then, in order to take it into our own hands and build our life with our will, our truth. "
Of course not.

And in the spring of 1919, Makhno fell out with Trotsky and began his war against the Whites. So he began that he soon became the commander of the united Revolutionary-Insurrectionary Army of Ukraine.

And he acted successfully. The steppe in which he beat the hetmans and the Austrians became fatal for the Denikinites. The eagles of Nestor Ivanovich did not give battles, ambushes, swoops, partisan tactics, interruption of communications, these are all Makhnovists.

And in the fall of 1919, Nestor Makhno began to build an independent Gulyaypole Republic, without the dictatorship of the proletariat, but with free councils. Wrangel tried to persuade him to his side, but it did not work, he executed his envoys, but he helped with the red, sending 2 fighters led by Karetnik to the assault on Perekop. The detachment already in the Crimea, after the victory, came into conflict with the Reds.

But violent anarchism could not get along with any state, in principle, with the dreams that were expressed by Bulgakov:

... that eternal, long-awaited peasant reform is needed:
- All the land to the peasants.
- Each of them has 100 dessiatines.
- That there were no landowners and spirit.
- And so that for every 100 dessiatines, faithful stamped paper with a seal - into an eternal, hereditary possession, from grandfather to father, from father to son, to grandson, and so on.
- So that no punks from the City would come to demand bread. Peasant bread, we won’t give it to anyone, that we won’t eat it, we will bury it in the ground.
- To bring kerosene from the City.
But the Bolsheviks came in earnest and for a long time, and the support of the Makhnovists was melting away, people were tired of the war by 1920, since 1914 it was around, and gradually it came to the peasant's head that what kind of power was better than a further war to no avail and no end.

On August 28, 1921, 78 people, led by Makhno, broke through to Romania, this is all that remained of his army, which had lost the support and faith of the population in success.

Then there was emigration, Makhno did not carry off the bagulov with good and beggar, working either as a carpenter, or as a trader by sewing slippers. And death from tuberculosis.

Could he have won?

No, and again no, even in the Middle Ages, peasant wars ended in failure, a village cannot survive without a city. Especially in the era of the industry.

Was dad a scoundrel and a power-hungry man?

Again, no, he was a romantic, one of the last romantics of the era that gave birth to the revolution itself. And, probably, the last leader of the peasant war in world history, it was with his army that attempts to build the same peasant kingdom that they had dreamed of for a good millennium, no less than the Kingdom of God, ended with his army.

Nevertheless, the amount of dirt poured on the Makhnovists is striking, and both the red and the white were the same.

Nestor Ivanovich was accused of everything: from Jewish pogroms to polygamy. At the same time, the order in Gulyaypole was iron, and Makhno did not approve of banditry and arbitrariness.

Repressions - yes, there were, but no more than other sides of that war. And it is necessary to remember such personalities, with or without sympathy - another conversation. Not the worst of those who were born at that time and the Ukrainian land, for sure.