Payments to reservists want to be “tied” to new military salaries 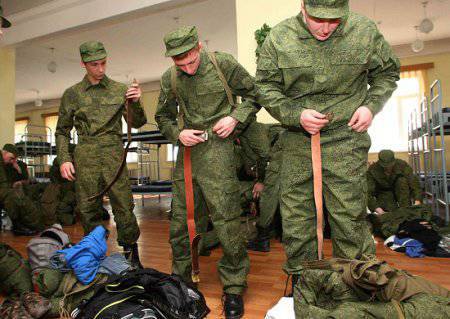 This fall, the State Duma plans to consider in the second reading a bill that radically changes the system of staying in the reserve of military service citizens.

It is about creating a professional mobilization reserve in Russia. His army command and the leadership of some law enforcement agencies will call under their banners during war, major exercises or emergency situations.

No one is going to drive the people who have served in the army back to the barracks. For a long time to tear them away from home and work - too. The bill provides for a strictly voluntary entry of the reserve in the reserve army. It can look like this. Before being transferred to the reserve, the commander will offer the soldier to sign a contract, according to which yesterday's fighter undertakes to return from time to time. Another possible way is to recruit contract reservists through military registration and enlistment offices.

In order to interest a person with an "extra urgent" service, they will begin to pay a certain amount every month. At first, the deputies believed that depending on the military specialty and army rank, the reservist should establish a salary in 5-7 thousand rubles per month. But, after the salary in the Armed Forces was raised several times in January of this year, the financial approaches to this bill changed somewhat.

During the period of fees for reservists will keep their average salary on the "citizen". In addition, the "guerrillas" will receive money as ordinary contract. For such people, they want to introduce additional payments, in particular, the regional coefficient and the monthly allowance for continuous stay in the reserve. The main thing is that the spare soldier’s wallet will be replenished regardless of whether he is working or is currently in the military unit.

Mobilization innovations are associated with considerable financial costs and affect the interests of employers. Apparently, this explains some delay in the consideration of the draft law in the State Duma. Recall that the original term of the official "registration" in Russia contract reserve troops called 2012 year.

It, apparently, should be corrected. However, the deputies do not reject the very idea of ​​forming a new mobilization structure. Moreover, in order for reservists to meet higher military requirements, the State Duma proposes to revise the deadlines for them to complete military training. Today, a soldier and a reserve officer are called into operation about once every three years. Charges usually last no more than two months.

The authors of innovations do not see the point of increasing their duration, otherwise the person will simply be fired from civilian work. But more likely to organize army retraining, apparently, will still have to. One of the options is an annual two-week training camp for reservists in a military unit near their place of residence. In order for a person, being in the reserve, to have the opportunity of military career growth, the "partisans" can be granted the right to free professional retraining in the army and naval universities.

Deputies propose to form a mobilization reserve in Russia in several stages, giving priority to the creation of a second front for the Armed Forces. To begin with, on the basis of some military units, the Ministry of Defense will conduct an experiment on the recruitment and training of reserve personnel. If the first pancake does not come out lumpy, the new system can fully earn in a couple of years. By this time, according to some estimates, the Armed Forces will already have at hand 8600 professional storekeepers. Then, they say in the State Duma, it will be the turn of recruitment of personnel reserve to other security agencies.

Those soldiers and sergeants who do not want to sign a contract for service in the mobilization reserve before being fired will be included in the so-called mobilization resource. Staying there extra money will not bring people. They will still remain on military duty, but they will be less likely to call for army training than reservists. And in an emergency situation such people will be put under the gun secondarily.

Dossier "RG"
Formation of a well-trained mobilization reserve is a common practice of leading Western countries. His staff in Germany, France, Britain and the United States even exceeds the size of the Armed Forces.

In America, the role of the "second front" is played by the National Guard. In addition, the army and the air force have their own manpower. Americans serve voluntarily in reserve, necessarily signing a contract with the military command.