Putin: to act on the situation, or the ideology of the "revolution from above" 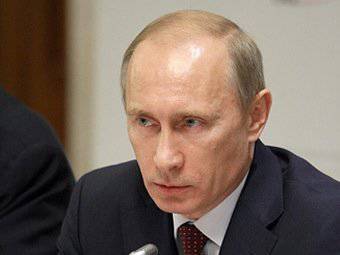 If you do not get involved in such dominant in the free press news For reasons like Putin’s flight with cranes and a conversation with Masha Gessen herself, it’s easy to notice that in between the head of the nuclear power was engaged in the performance of his direct duties. And according to the results of the first half of September, this performance develops into a completely distinct ideological picture.

Literally within a week, the president at various venues set out a set of very interrelated political principles. And, what is important, the principles are not out of place where they come from, but they are a logical development, a continuation and transposition of the so-called theses on the current reality. “Programmatic articles” published during the election campaign. And also - the concentration of much of what Putin has publicly spoken about since the spring of last year.

In this regard, Putin's remarks about the defense industry at the Security Council, the interview with Russia Today TV channel and, of course, the performance of the day before yesterday in Krasnodar, are very revealing.

All these statements have one very common important feature: Putin considers specific problems in them, systematizes them, binds them in a complex way - and proclaims the ideology of solutions to these specific problems, and already these solutions somehow form themselves into something complex.

And this is how you combine these “details” with each other, - the Kalashnikov’s ideology of “revolution from above” turns out.

Incidentally, this does not contradict Putin’s well-studied political methodology: he is not a revolutionary, he is an evolutionist, prone to accurate, verified steps with a wide use of compromises and consensus, reliable, thoughtful, long-playing practical scenarios. Putin 12 years "acts according to the situation" - bearing in mind, of course, the idea of ​​the required result. Moreover, the ideas about the result on these or other segments can be completely adjusted for themselves - also “according to the situation”.

Now such a situation has arisen (more precisely, such an understanding of this situation by the Putin team) that the further evolutionary development of the country requires perhaps even revolutionary content — that is, rejection of the practice prevailing in various spheres of state life, and decisively replacing it with a directly perpendicular, if not directly opposite.

(By the way, such a technique is a complex, revolutionary in content modernization of the state mechanism without breaking state foundations - we call it Stalinization.)

So, what do we have from Putin after the summer reconnaissance?

We have the task of “a comprehensive breakthrough in the defense industry” - which automatically implies a comprehensive restructuring of the entire economy with an eye to its sovereignization. That, in turn, is impossible without a rigid state will and without a comprehensive state development project like the five-year plans.

We have a “sensational” recognition of the obvious fact that the public is above the personal, and in no other way.

Consequently, we have the task of a hard return to the ideology of human engineering in the social sphere - primarily in educational and cultural policy: an integrated systemic and fundamental education, a powerful educational component in education, promotion of a wide front of traditional cultural and moral values, restoration of sovereignty in the information space . And all this is in spite of the existing system and not looking back at “freedom”. And also, of course, by means of a rigid state will.

We have the initiative to “nationalize elites” - which, in addition to clarifying the issue of civic loyalty, firstly, essentially, makes senseless bureaucratic corruption and, secondly, draws a clear line between the propensity to business and the state service as equally respected, but fundamentally different spheres of human activity.

We have a logically connected with this awareness of the need for a mechanism of personal responsibility of responsible comrades - which means not just moving from one nomenclature to another niche.

We recall, we also have a methodically implemented priority project for reunification, “gathering Russian lands” - first in the format of the Customs Union, then the Eurasian (ie, with integrated political and military-political institutions).

All this has not been said before. These types of tasks have not been set for the state, economy and society for more than two decades. Moreover, this ideology contradicts the very essence of the post-catastrophic Russian state, including the practice of former Putin's presidencies and premierships. In other words, the overwhelming majority of state institutions are not just not ready to solve such problems - they are not even intended. Not even because the officials are bad, but because a design drawing is not provided.

And in this regard, Putin’s assessment of the nature of the “Arab spring”, which was undoubtedly addressed to our elites, and free from revelations of American intrigues, is very indicative: “The leaders of these countries clearly looked at the need for change, did not feel the trends in their own countries and in the world, and made timely necessary reforms. "

... Putin is not a blogger. He can not set forth loud slogans, not checking with the situation and readiness of those or other thoughtful and prepared system solutions.

After all, any “revolution from above” is only worth something when it is able to be implemented within public (or non-public, which we may not even notice) decisions, regulations and control over their implementation. This is an obligatory next step after the proclamation of political principles.

And, by the way, based on the understanding of the “established practices”, this whole cheerful picture will inevitably be decorated with sabotage. Including - with the participation of "swamp infantry."

And this must be prepared.