Walking trucks for the American army 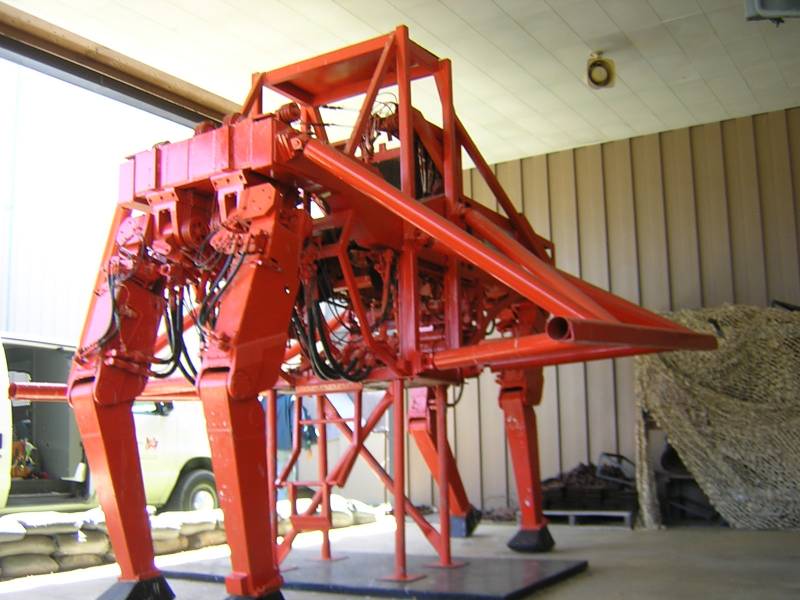 Vietnam as a challenge

The United States, embroiled in wars in Southeast Asia, has learned at least two lessons. The first is to win in such conditions without using weapons mass destruction cannot be won. And the second lesson is that extremely difficult terrain requires extraordinary solutions. Wheeled and even tracked vehicles in the jungles of Vietnam were far from always suitable, and this, in turn, limited the mobility of the army. Engineering thought, coupled with an almost unlimited military budget, gave birth to real monsters in the United States. Such as LeTourneau's Transphibian Tactical Crusher - a giant 95 ton tractor built in just two copies in 1967. The machine in Vietnam, like a combine, grinded trees, bushes, leveled hummocks, and created a more or less level road for infantry and traditional equipment. However, the difficulties with the transportation of the "crusher" put an end to the further development of the idea. A more elegant solution was required. And they found it in bionics, that is, in imitation of natural "engineering" solutions. The idea of ​​scaling the locomotion of walking movement to the Pentagon's transport equipment was a very good idea. It was supposed to use a pedipulator or a mechanical analogue of a human (animal) limb as a mover. And this is not without reason - millions of years of evolution have shown that it is precisely this option of moving over a complex surface that is most effective. Where a wheel or a caterpillar has to overcome an obstacle, the pedipulator will simply step over it. True, on a flat and solid road, all the advantages of a walker melted away - cars and Tanks moved much faster and spent less energy on it. But the Americans in Vietnam needed a walking technique for extreme off-road conditions, so they were ready to put up with low speed. 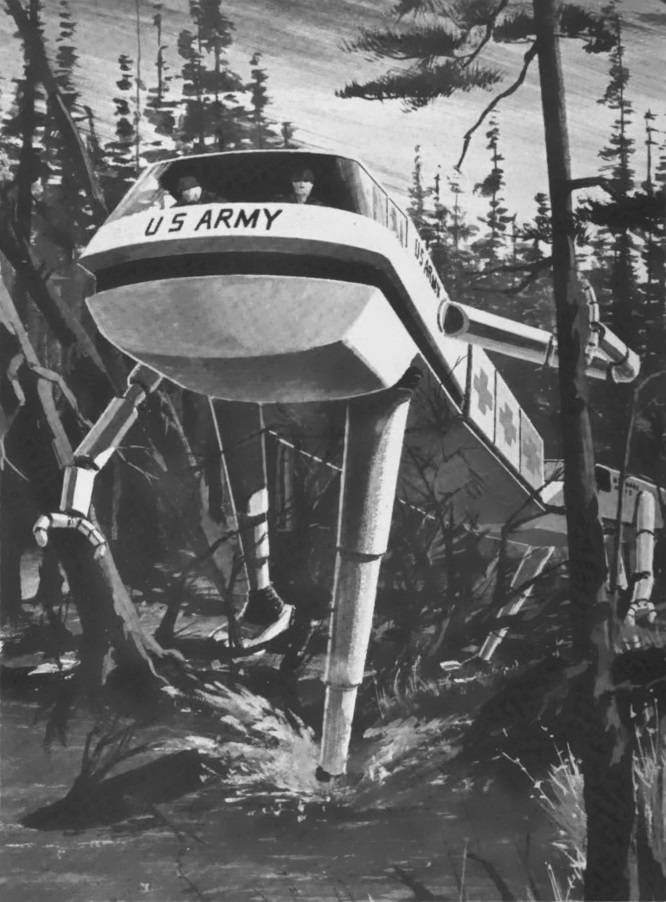 Army Landwalker 1964 / Source: wikimedia.org
One of the first models, albeit painted on a poster, was the 1964 Army Landwalker, presented at the World's Fair in New York. The engineers' imagination ran wild - they equipped the hut on four legs with two manipulators, apparently for the evacuation of the wounded. However, such a technique did not have real prospects, simply because the technical possibilities of implementation were absent in principle. The developments obtained earlier in a special laboratory of the famous Detroit arsenal showed not the most promising prospects for pedipulators. At the same time, the American army had a demand for extremely passable vehicles, and this had to be reckoned with.

Ralph Mosher and his trucks

General Electric (GE) engineer Ralph Mosher can be considered one of the pioneers of military robotics. Almost everything that we now see in conceptual prototypes and working models in the 60s and 70s was implemented by Mosher. Of course, with varying degrees of success. In the mid-50s, under his leadership, the first prototypes of remotely controlled manipulators were created. The work was carried out under the auspices of the GE Department of Nuclear Power Plants. The machines were supposed to replace humans in the territory of radioactive contamination or simply in the work with hazardous substances. Mosher managed to create surprisingly sensitive manipulators for his time. So, in 1956, his Yes-Man Teleoperator robot could help a girl put on / take off her coat. Naturally, there was no question of any automation - the system was remotely controlled by the operator. The engineer was able to equip his development with a force feedback system, which made it possible to more accurately control the manipulator. A couple of years later - in 1958 - Mosher will create a real industrial GE Handyman with several degrees of freedom. The device was described with the following epithets:
"A pair of clawed hands, sensitive enough to pack eggs, strong enough to crush golf balls, and nimble enough to light a match." 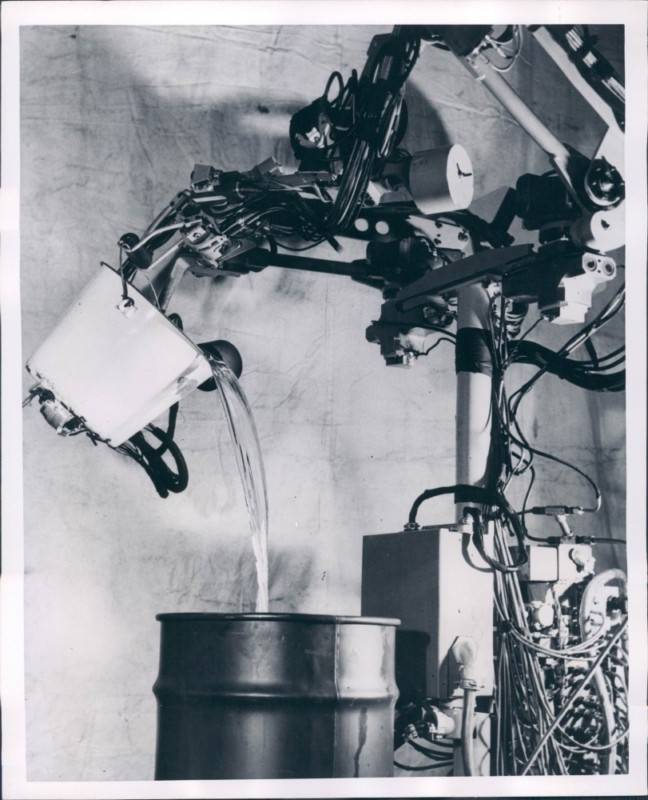 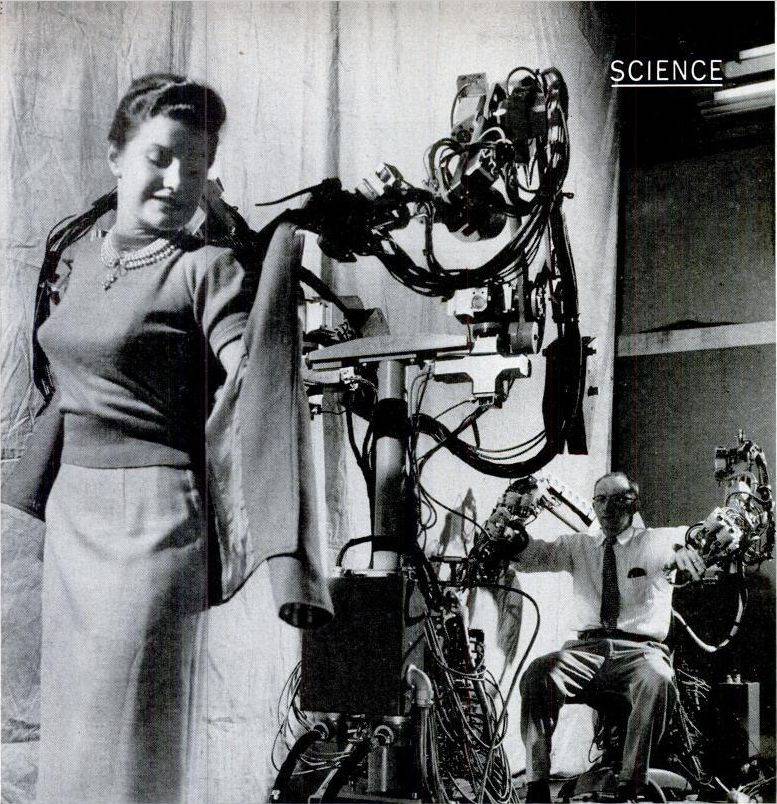 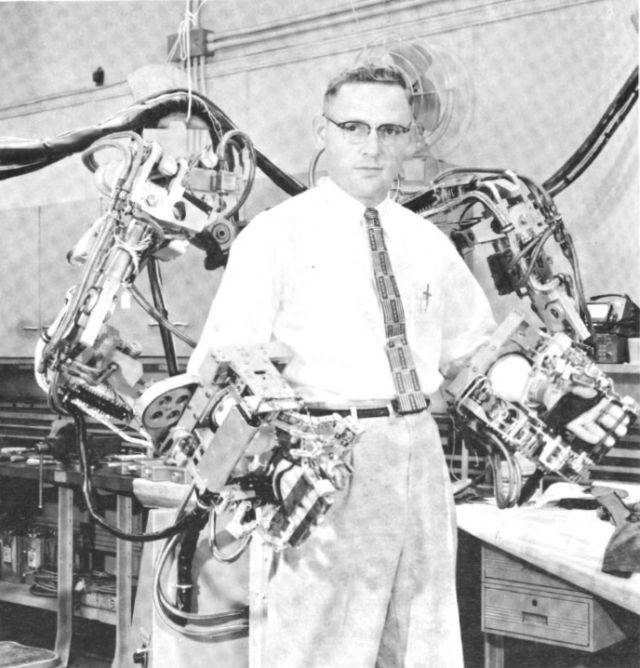 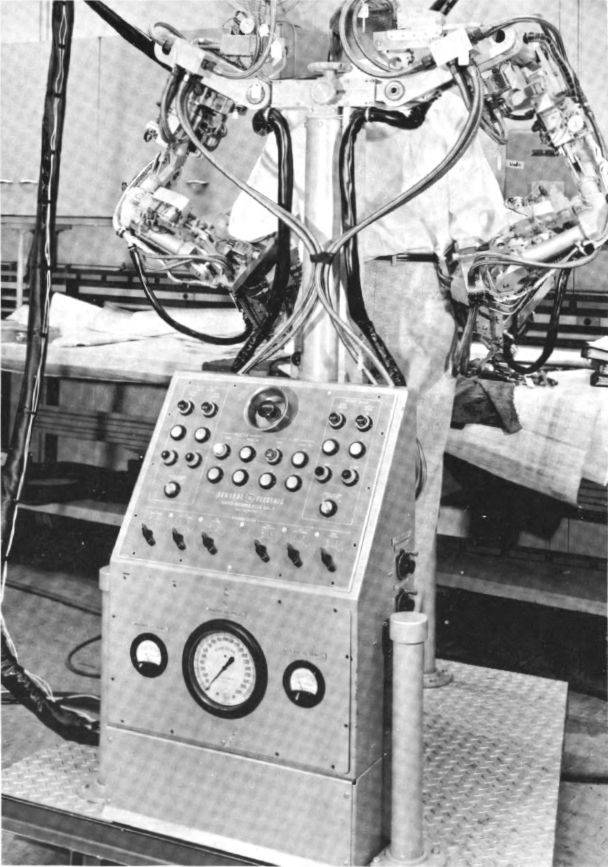 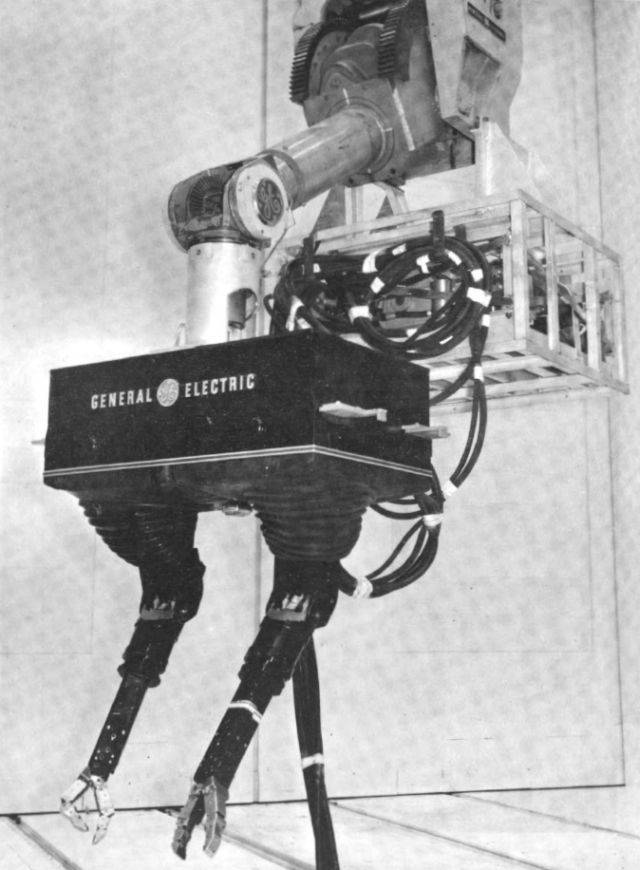 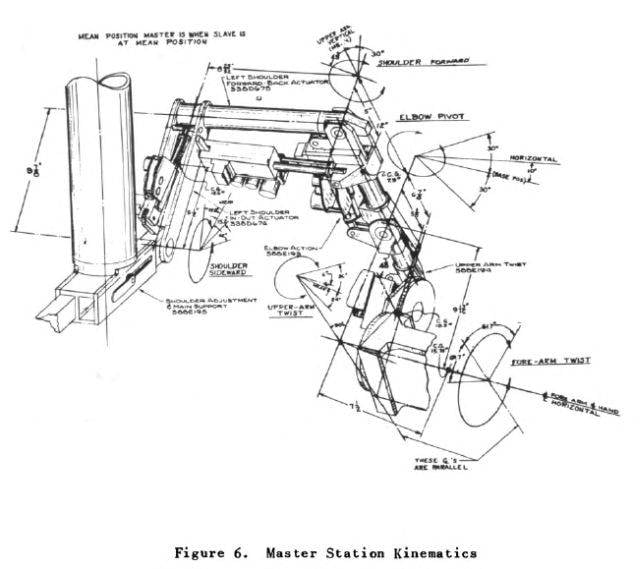 GE Handyman. Source: cyberneticzoo.com
In 1964, the designer offered everyone interested and, above all, the American military, the concept of a two-legged transporter, the place of which was, most likely, only in a science fiction film. The general name GE Pedipulator hid a whole family of sketches, one of which became a real model. The bipedal mechanical creature, very similar to the house of Baba Yaga, with a height of 5,5 meters, was only a declaration of the author's intentions - the device lacked a motor and transmission. With this, the iron giant could not perform any useful work, except for moving one or two people off-road. The military did not like the idea. Firstly, the device turned out to be very noticeable. Secondly, it was potentially very unstable - there was no way to create a progressive stabilization system at that time. And, thirdly, the lack of a cargo platform seriously limited the military functionality of the Mosher vehicle. Even two manipulators, which the engineer proposed to integrate into the structure, did not help, which made the apparatus look like a predatory dinosaur. Interestingly, in the Soviet Union, futurists also allowed themselves to get carried away with bipedal pedipulators - in 1974, in one of the popular scientific magazines (presumably "Tekhnika Molodoi"), an image of a machine appeared that looked very similar to Mosher's dead-end concepts. In the Soviet interpretation, motion control was carried out through a neural interface. 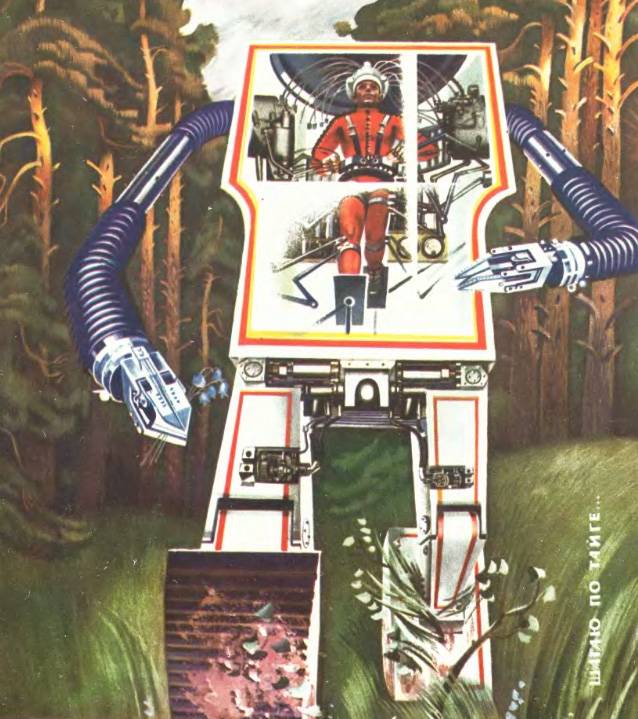 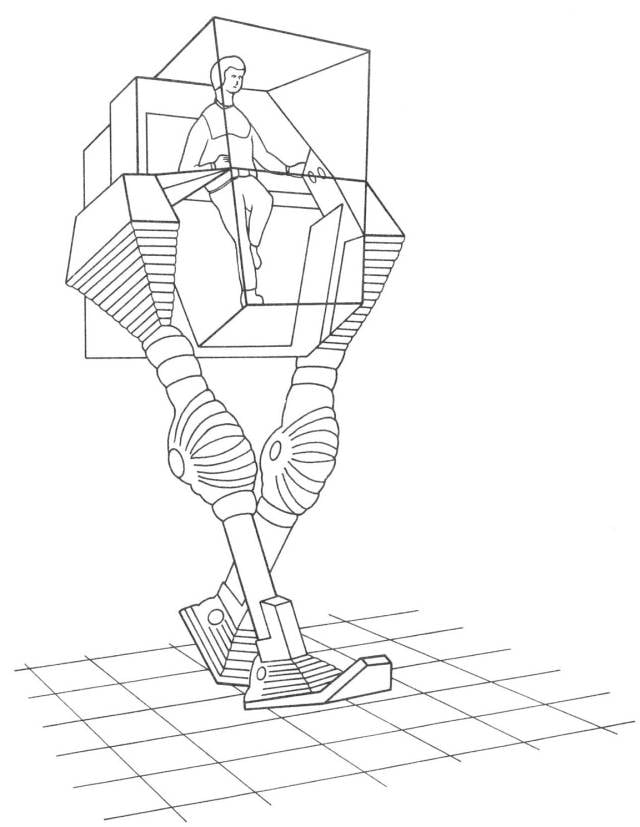 Thus, Mosher saw a solution to the problem of the patency of military vehicles. Source: cyberneticzoo.com
The experience with two-legged walking machines was incorporated into the development of the Walking Truck vehicle in 1969. The development still has a couple of several names - Cybernetic Anthropomorphous Machine and Quadruped Transporter. With a great degree of confidence, the car is called the grandfather of the modern Spot robot dog from Boston Dynamics. The Mosher project received extensive funding from DARPA and TARDEC (US Army Armored Directorate). By the way, the military themselves were not able to bring to mind their own project of a walking truck under the long name - ATAC 4-legged vehicle. The project did not advance further than primitive wooden models, and it was decided to focus efforts on the idea of ​​Mosher. He suggested moving the driver's cab to the center of the truck's base, leaving little room for the cargo platform. However, this time it came to developing a working prototype. 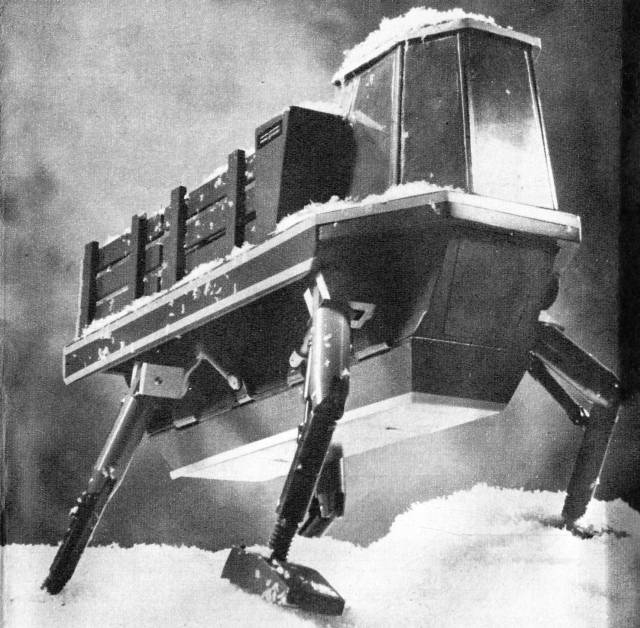 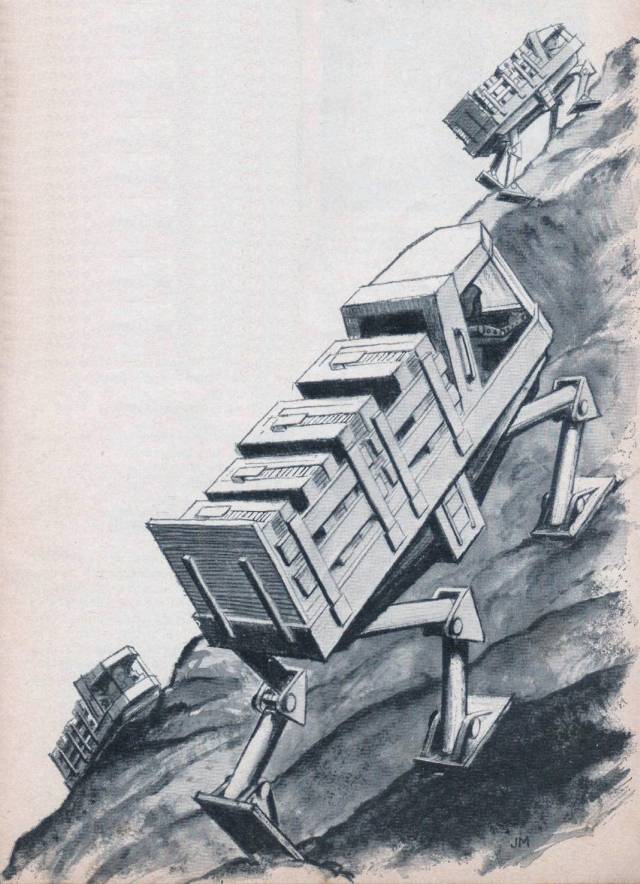 The US military has also been working on a walking truck. It didn't work out very well. Source: cyberneticzoo.com
The Walking Truck was a 1,3 tonne four-legged transporter capable of carrying approximately 270 kg of payload along with the operator. The power plant was a 90-horsepower gasoline engine, which theoretically was supposed to accelerate the car to 55 km / h. But this is in theory, but in practice it was limited to 8 km / h. Even this speed was achieved with great reservations. It's all about the hydraulic system, requiring at least 250 liters of oil, which simply had nowhere to place, so the truck moved on a leash from several oil hoses. And the pressure in the "hydraulics" varied from 163 to 220 atmospheres. 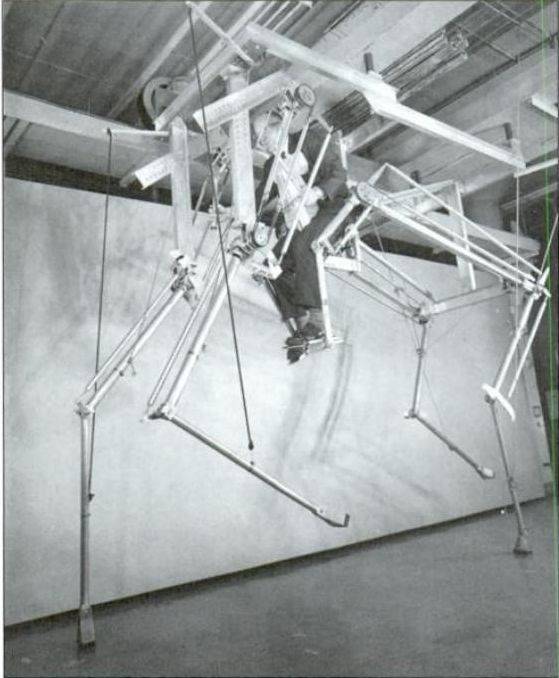 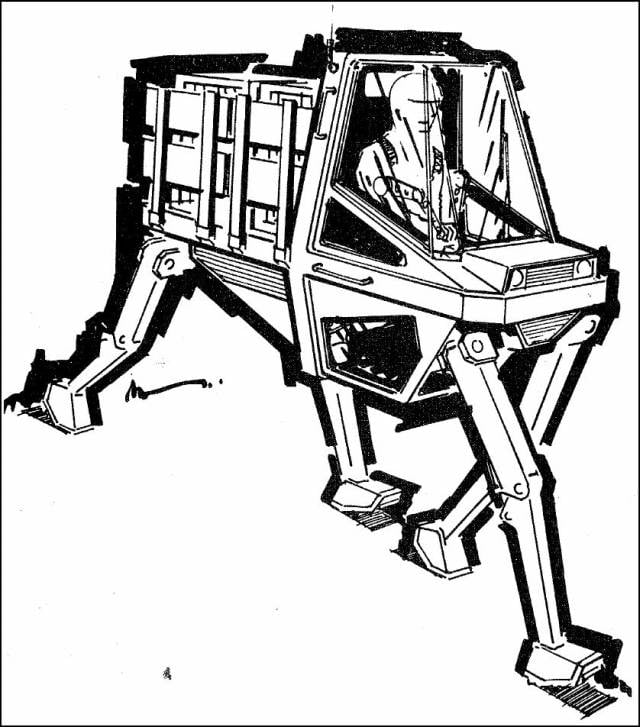 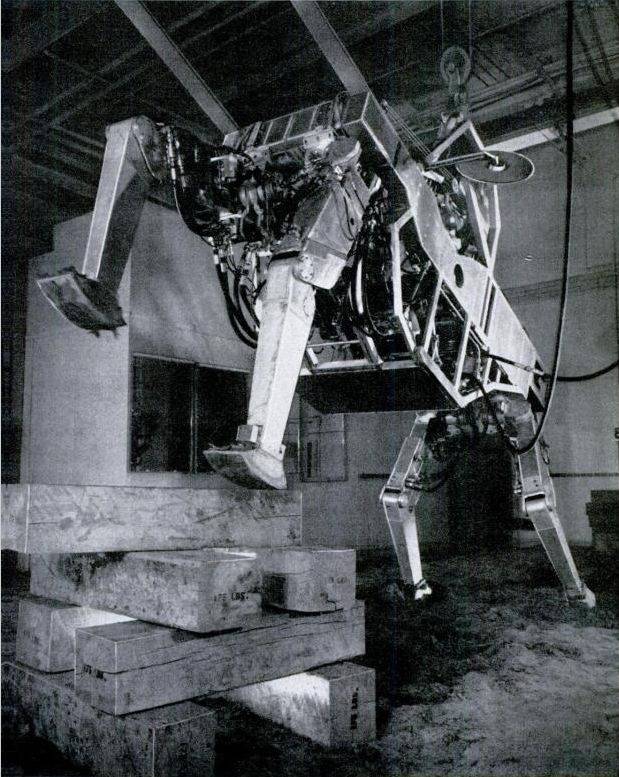 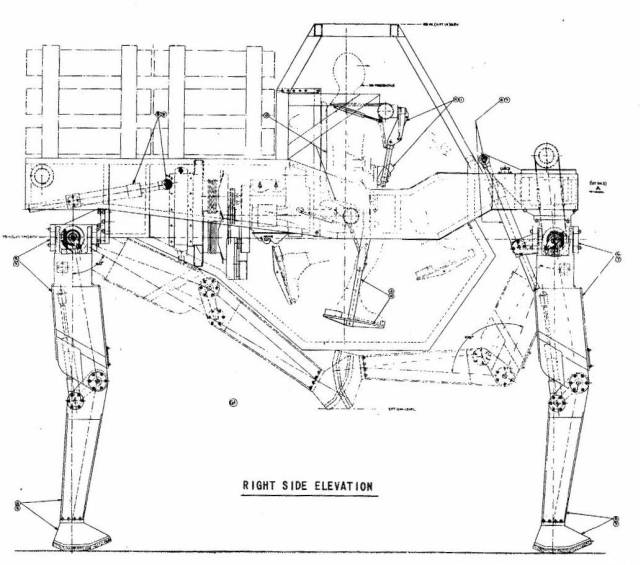 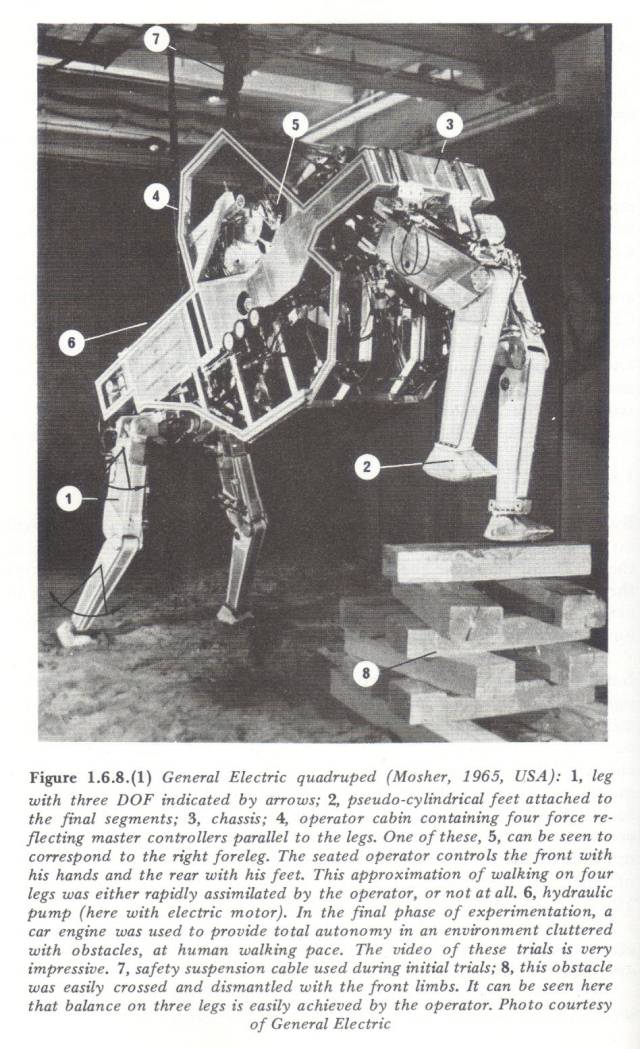 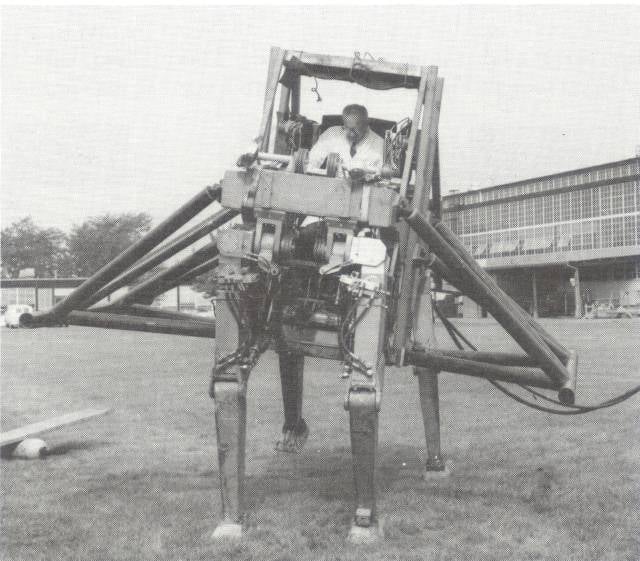 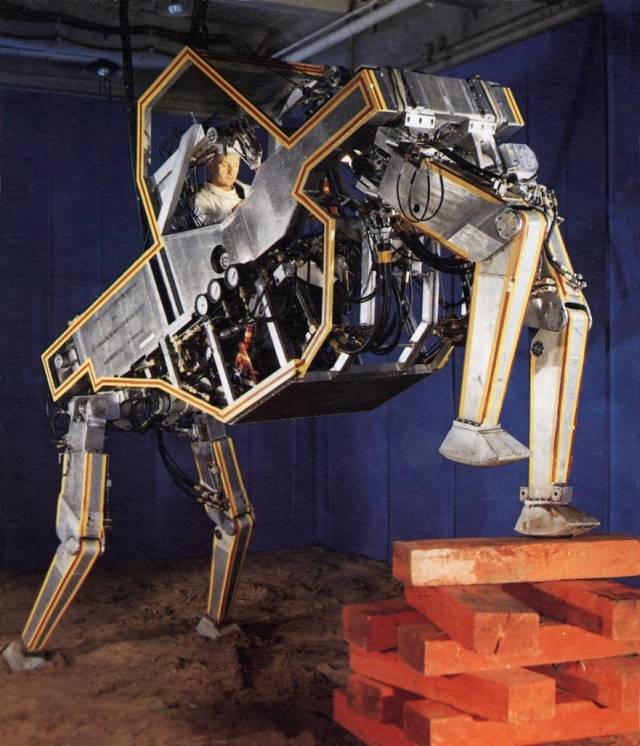 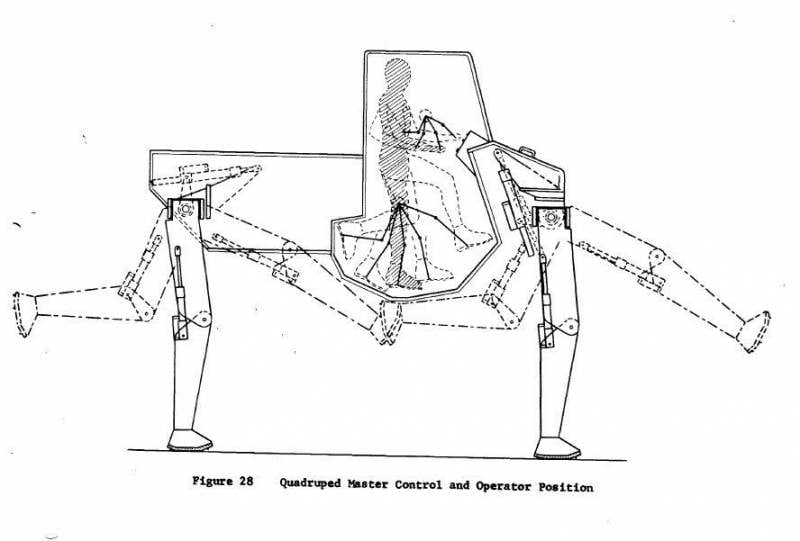 Walking Truck at various stages of development. Source: cyberneticzoo.com
There were also difficulties with the stability of the 4,5-meter iron mule. When Mosher's car was taken out for a walk in the fresh air, it was equipped with anti-rollover bars. This, of course, did not add any maneuverability or carrying capacity to the truck.

But the greatest difficulties awaited the operator of this amazing four-legged machine. A person had to simultaneously manipulate all limbs in order to simply put the foot of the Walking Truck on a step. At the same time, the iron horse constantly vibrated, rustled, staggered, threatening to overturn. In general, after half an hour of such work, the operator's vestibular apparatus failed.

All these difficulties were started only in order to freely walk on shallow water bodies, push light jeeps out of the mud and climb steep bumps with varying success (if the Walking Truck does not turn over). As a result, the Pentagon, assessing the potential for creating iron horses, refused further funding. And the civilian sector did not need such delights at all.
Now a unique example of a walking truck can be found in the exposition of the American Museum of Military Transport.