Mi-28NM and Chrysanthemum-M. Prospects for attack helicopters and missiles 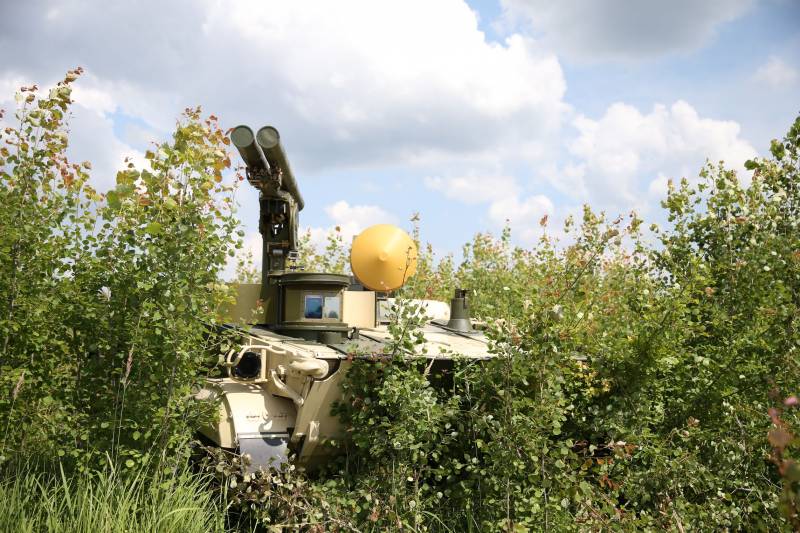 The 9K123 Chrysanthemum anti-tank missile system based on the 9M123 family of missiles is considered one of the best domestic developments in its class. At the same time, the development of the complex does not stop. Recently it became known about the plans for a new modernization of the guided missile, as well as the intention to expand the range of its carriers through the next modification of the Mi-28 helicopter.

The international military-technical exhibition EDEX-2021 was held in Cairo, during which a number of Russian enterprises and organizations presented their developments and spoke about future projects. So, Kolomna "Design Bureau of Mechanical Engineering" from the holding "High-precision complexes" (state corporation "Rostec") has revealed plans for the further development of anti-tank systems of its own design.

According to TASS, General Designer of KBM Valery Kashin spoke about the start of work on the modernization of the 9M123 ATGM of the Chrysanthemum complex. At the same time, only the existence of such a project was disclosed, while details of a technical and other nature were not disclosed. V. Kashin also mentioned that KBM does not plan to upgrade missiles of the previous generation, which are part of the 9M120 Attack family.

In the near future, the list of 9M123 missile carriers will be expanded. it weapon will be able to carry and use a new modification of the Mi-28NM attack helicopter, focused on export deliveries. The use of such missiles will be possible after the completion and completion of all necessary flight tests of the guided weapons complex. 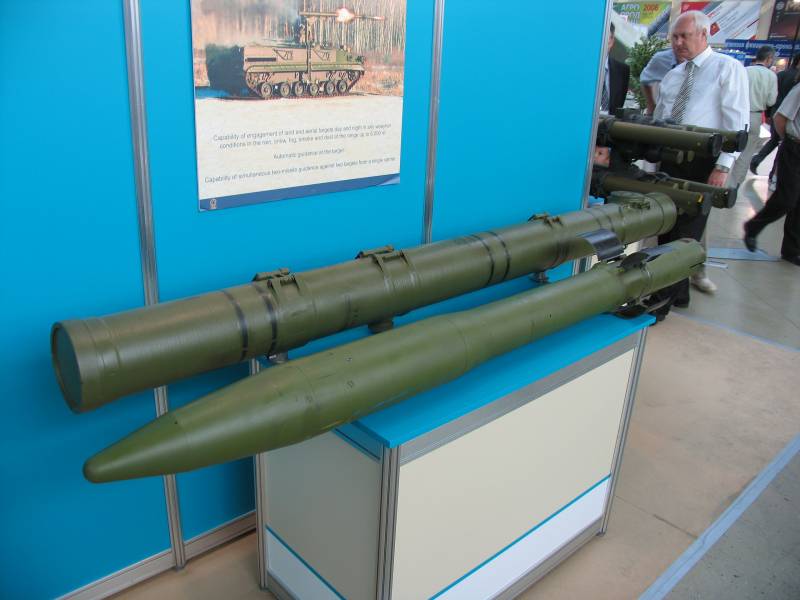 Rocket 9M123 and its transport and launch container. Photo Vitalykuzmin.net
According to V. Kashin, a standard serial Chrysanthemum rocket is used as part of the helicopter KUV. Such ATGMs have been mass-produced over the past several years. It was not specified whether the Mi-28NM helicopters in the original and export versions will be able to use the aforementioned modernized missile.

Recent ones news the development and modernization of the Chrysanthemum anti-tank missile system are of great interest. This complex is deservedly considered one of the best domestic developments in its field, and its further renewal will provide well-known advantages. At the same time, as reported, the development of the complex goes in several directions.

First of all, it is planned to modernize the 9M123 rocket. How exactly this will be done, and what results such a project will give, is not reported. However, it should be recalled that several years ago, at the Army-2018 forum, KBM presented a modernized 9M123M ATGM. Moreover, this product was demonstrated at exhibitions as part of the Chrysanthemum-VM complex for helicopters. It is quite possible that in recent statements about the development of missile weapons, these projects were referred to.

During the first demonstration of "Chrysanthemum-VM" it was reported that the 9M123M rocket retains the general architecture and principles of operation of the previous products of the family. In particular, the combined guidance system with radio command and laser channels has been preserved. A tandem cumulative warhead is still used. At the same time, design improvements and new methods of application made it possible to increase the firing range from the original 5-6 km to 10 km. 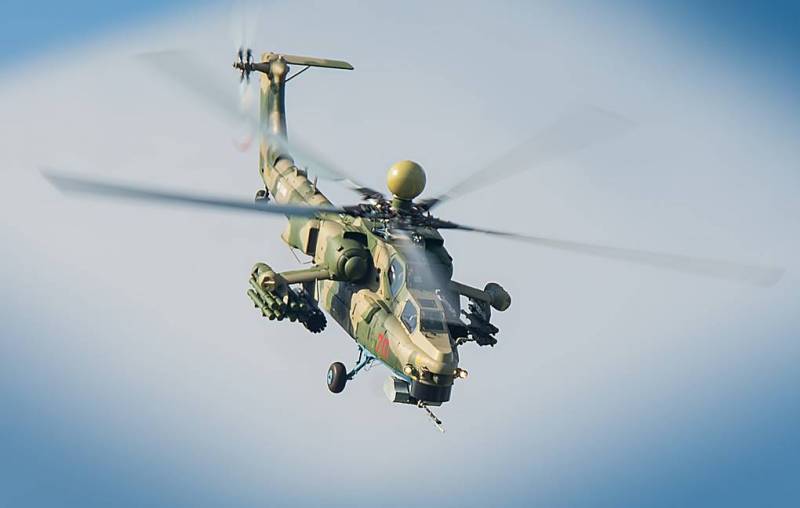 Helicopter Mi-28NM. Photo "Russian Helicopters"
In addition to the new missile, the Chrysanthemum-VM ATGM helicopter includes a suspended container with guidance radar, fire control devices and means for integration into the carrier's sighting and navigation system. At Army-2018, the new complex was demonstrated with the Mi-28NE helicopter. About a year later, it became known about the testing of a new weapon on the Mi-28NM.

Earlier it was reported that Russian Helicopters are now developing an export version of the newest Mi-28NM. When creating it, all the main developments and solutions for a helicopter for a domestic customer are used. As it has now become known, a new anti-tank complex is also used in the export project.

According to the results of modernization

The result of ongoing projects being developed by the forces of several organizations will be the next update of the existing attack helicopter, the integration of new weapons and a noticeable increase in combat capabilities. Available data show that the Mi-28NM helicopter with the Chrysanthemum-VM missile system will have significant advantages over other equipment in its class.

The Mi-28NM helicopter differs from the previous aircraft of its family with an updated sighting and navigation system. Thus, the N025 overhead radar is now being installed in a regular manner, the armament control system has been updated, and devices for interaction with the UAV have been introduced. Improved general systems, controls, etc. 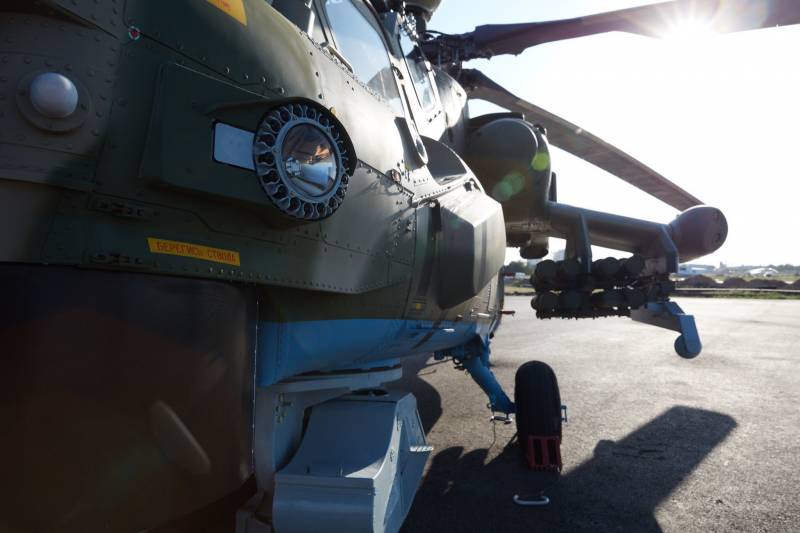 Mi-28NM and its suspended weapons. Photo "Russian Helicopters"
The external sling of the Mi-28NM can accommodate up to 16 anti-tank missiles of various types in transport and launch containers. In the initial version of the project, the KUV of the helicopter includes ATGM of the Shturm and Attack families. Using them, the helicopter can attack and effectively engage protected targets at ranges of up to 6 km. At the same time, an increase in the characteristics of such weapons is no longer expected - KBM does not plan to modify these missiles.

Based on the results of the current modernization, the Mi-28NM can receive a modern Chrysanthemum-VM missile. This ATGM is capable of delivering a warhead to a range of 10 km, penetrating up to 1100 mm of armor behind ERA. In all respects, the new 9M123M missile outperforms the older "Assaults" and "Attacks", which should have a positive effect on the overall effectiveness of the carrier helicopter.

In the future, another expansion of the range of guided weapons is possible, this time at the expense of the Hermes-A complex. Aviation The missile version of this ATGM will have a range of up to 20 km and can be used at any time of the day and in any weather conditions.

The Mi-28NM attack helicopter has already reached serial production and operation in the army. The first contract for 98 helicopters for the Russian Aerospace Forces was signed in June 2019.Soon, several pre-production vehicles were handed over to the customer, and supplies of equipment from the full series began in 2020. Over the next few years, the Ministry of Defense will receive all the desired helicopters. 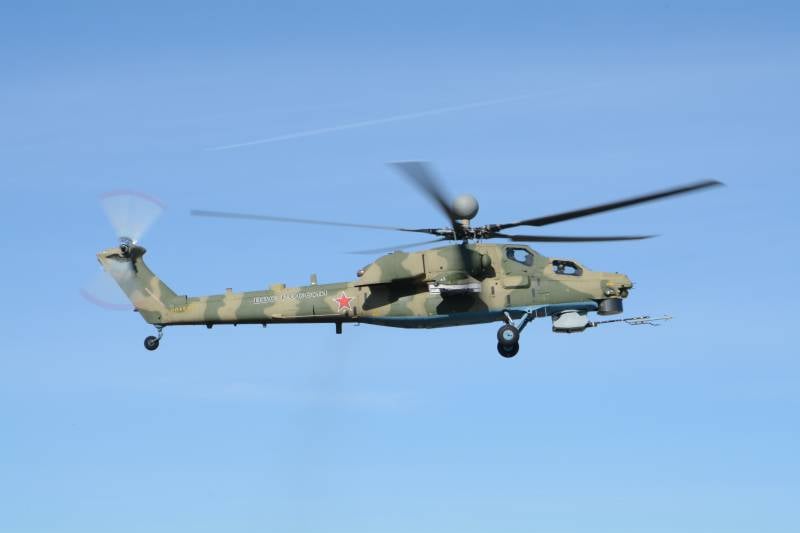 Mi-28NM is being tested. Photo by Rostec
In parallel with the production of the Mi-28NM, work is underway on new weapons for it. It can be assumed that the development of "Chrysanthemum-VM" will be successfully completed, this complex will go into service and go to production helicopters. However, the timing of the work and the start of rearmament are still unknown.

An export version of the Mi-28NM is also being created right now. Industry representatives have repeatedly said that such a machine has great commercial potential and will definitely find its customers. First of all, interest is expected from the armies of Africa, Asia and the Middle East - the traditional buyers of our military products.

The export Mi-28NM should interest foreign military personnel with increased flight and combat characteristics due to the use of new components and solutions. It is obvious that the expansion of the range of ammunition and the integration of 9M123M extended-range missiles will attract additional attention and become a real competitive advantage.

On the eve of success

Thus, the Russian defense industry continues to develop guided anti-tank weapons, as well as updates and improves their carriers, incl. aerial platforms. Such work is carried out in the interests of our army, as well as with an eye to the international market. According to the latest reports, the next result of such programs will be the Mi-28NM helicopter with an expanded list of missile weapons.

Obviously, such an air strike system will first enter service with our Aerospace Forces, and then appear at exhibitions and become the subject of export contracts. Moreover, such results will be obtained only in the future, since industry needs to complete the development and testing of new samples. However, the results of the work will fully justify this expectation.