"NOT weapon": under the gun Syria

In a nutshell, this definition is understood as collective or unilateral coercive measures applied by states or international organizations to a state that has violated the norms of international law.
To date, "Strong International Law" violated Syria. The legitimate authorities refused to leave the country's population at the “mercy” of the newly-made “Libyan-style” democracy.

The reaction of the international community was not long in coming. Epithets about “The Cannibal Assad”, “Numerous victims among citizens of Turkey, Qatar, Libya, Afghanistan, Saudi Arabia, and those who defended the rights of the Syrian people to commit suicide” flew from everywhere.

The word should not diverge from the case. And, following the criticism of the legitimate government of Syria, international sanctions entered into action.

One of the main santskionerov made an important trade partner of Syria - the European Union.
Let us clarify for ourselves what the prohibitive policy of Europe comes down to? 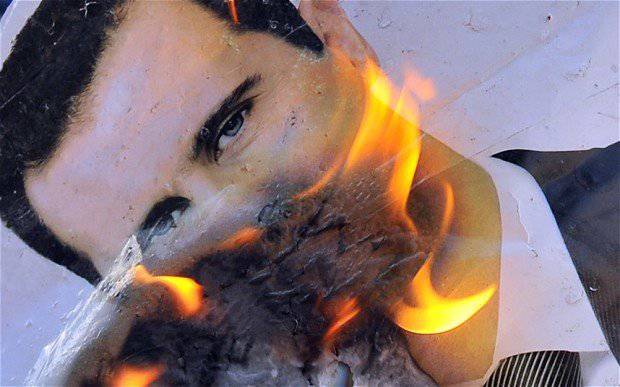 The prohibition was initiated by the creation of “blacklists of non-entry persons”, who are denied access to the territory of the European Union. The list included real monsters, among which both the “cannibal Assad” and the woman who created such a monster are the mother of President Anisa Makhluf, who spread the “cannibal” gene, President’s wife Asma Assad. Sorry for the irony in the previous sentence. But isn’t it in such a way that these events are presented in the European press?

In addition to the relatives of Bashar Assad, the list included a considerable number of individuals and legal entities, one way or another connected with the president of Syria.

At present, the 162 Syrian official and businessman are on the EU sanctions list. In addition, European business has banned contacts with more than 49 Syrian organizations, including the national airline of Syria, the Central Bank, a number of export companies.

Support for "mass repression, rape, drugs, and rock and roll" cost the Syrian air carriers and export companies a "pretty penny". By a regulation of the EU, accounts registered in the “black lists” of Syrian companies opened in the territory of the European Union were arrested and frozen. Access to these funds by their rightful owners was denied up to the complete lifting of sanctions on Syria.
By the way, the President of Syria suffered from this ruling. 19 July 2011, the information appeared that the assets of Syrian President Bashar al-Assad were frozen in the UK in the amount of about $ 160 million.

Currently, new lists of “non-entry Syrians” are being prepared for adoption. One of the last victims of these bans was the president of the Syrian Olympic Committee. He was refused, accompanied by the national Olympic team of Syria at the Thirtieth Summer Olympics, held in London. Not only for "cannibalism".

Knowing the love of cannibals for a luxurious life, in April 2012, Brussels imposed a ban on the supply of expensive shoes, caviar, and yachts to Syria.

As it is not difficult to guess, under the "forbidden aim" again turned out to be the president of Syria and his relatives. In the correspondence of the President of the country with his wife, who then fell into the hands of journalists (we will not say anything about the authenticity of this artifact), it was said that “Merciless tyrant” and his “Sun” bought diamonds and expensive furniture, and that the president’s spouse loves clothes from “ Chanel "and shoes from Christian Louboutin.

However, non-luxury cars, as well as other relatively expensive goods, were not banned so as not to hurt the interests of diplomats and other foreigners working in Syria.

A ban was imposed on the supply of caviar, truffles and cigars to Syria costing more than 10 euros per piece, wines and alcoholic beverages more than 50 euros per liter, cars, airplanes and ships at a price higher than 25 thousand euros.

In search of "wrong" weapons

23 July 2012 of the year 27 EU countries adopted the seventeenth (in a year and a half) package of sanctions against Syria. Additional measures were agreed to ensure the implementation of the arms embargo to Syria. According to the new agreements, the EU introduced a search of ships and aircraft that would be suspected of supplying weapons or other equipment to Syria. Such an inspection is required to conduct each EU country in the event of a reasonable suspicion that a ship passing through its territorial waters delivers prohibited goods to Syria.

A similar requirement affected cargo aircraft arriving at airports in the European Union or departing from them.

It should be noted at the same time that the numerous planes transporting weapon boxes marked “NATO: made in the name of good!” To the Turkish region were not particularly interested by European officials. Although ... not all.

Recall the recent scandal with the Swiss grenades found on and inside the newly minted fighters for Free Syria. As a result of these findings, the European manufacturer has banned the supply of its "pomegranate products" to the entire Middle East. Naturally, only for the period of the internal investigation (apparently, they were still burned).

In addition, the EU has banned the import into Syria of materials that could be used to suppress popular demonstrations or to produce instruments of repression. It is, in particular, a dual-purpose technique. Political analysts say that the ban did not really affect the government’s army due to the EU’s recent embargo on weapons and police equipment imported into Syria.

Writing about the many Syrian friends and enemies is a thankless job. Let us dwell only on those countries that supported or did not support the EU sanctions against Syria.

Among the hegemones of the world arena, who supported the punishment of Syria on behalf of Old Europe, were, well, the United States of America. Special mention is given to countries that have received praise from the head of EU diplomacy, Catherine Ashton, for their policies. Croatia, the former Yugoslav Republic of Macedonia, Montenegro, Iceland, Serbia, Albania, Liechtenstein, Norway, as well as Georgia and Moldova, were included in the list of the lauded.

On the other side of the chess table was Russia. Most clearly the position of our government was voiced by Foreign Minister Sergey Lavrov: “The unilateral sanctions of the European Union imposed on Damascus contradict the decisions of the UN Security Council and the agreements reached at the meeting of the Action Group on Syria in Geneva. A unilateral path was chosen, and we believe that this is contrary to the principles of collective business management, this contradicts the decisions of the Security Council that were made on Syria, and this directly contradicts the agreements that were agreed upon by the so-called "Action Group" in Geneva. "

In other words, the sanctions on Syria, our government called their true definition of "blockade".

The reaction to these prohibitions was their complete disregard. However, Europe did not remain in debt. Thus, the Russian ships that delivered the repaired Syrian military equipment to the port of Tartus were deprived of the international insurance issued in London. Without this insurance, Russian ships were banned from entering European ports.

Oil industry will endure any violence

The lists are lists, but what Europe could really hit in Syria is the oil sector, namely, a ban on the export of Syrian oil to the EU market.

However, it seems that Europe has already been with Libya.

Syria currently exports about 150000 barrels of oil per day. The main part goes to refineries in Germany, Italy and France, which can process Syrian high-sulfur oil.

If sanctions are applied, Syria will be forced to send its oil to less profitable markets at a discount. But I think there is no doubt that there will always be buyers of these products.

Indicative of the mood of Western oil companies operating in Syria.

Ken Juge, a representative of Gulfsands Petroleum, according to Reuters, said that "as long as security is maintained at the sites, we will continue to continue our business." Gulfsands operates under the PSA in the 26 unit, which it shares 50 / 50 with the Chinese oil company Sinochem.

The Gulfsands contract covers the Khurbet East and Yousefieh deposits, where Gulfsands plans to increase production from current 21000 b / d to 24000 b / d by the end of 2012.

In addition, Western oil companies are afraid that if Bashar Assad remains in power, then after the introduction of sanctions and their forced withdrawal, all this oil wealth will be transferred to Russia or China, who will gladly sign new PSAs.

In other words, neither the “Cannibal Assad” nor the “mass violence in Aleppo” currently have any effect on the volume of gasoline pumped into German and other peaceful cars of the middle class.

Officially, the European Union limited itself to introducing “black lists” against Syria and freezing accounts of a limited number of its citizens. The ban on the supply of weapons can be easily circumvented thanks to the support of Bashar Assad by Iran. As in principle, any other European ban.

What is the result? I think that in the government of each of the countries sounded above there are not stupid people who understand perfectly well that in fact Europe does not want to see Syria in its current form, and that Syria itself is fighting and will continue to fight with numerous gangs of terrorists and criminals seeking to make Europe's aspirations a reality.

Well, “international sanctions” remain valid! Legally elected president in Syria remains in good health! We wish him success and the people in Syria on the way to overcoming the EU bans on the supply of truffles and diamonds, as well as to choose the best examples of the Russian car industry.

But, first of all, they should be willing to defeat the evil that has disturbed the peace of the great and ancient people.