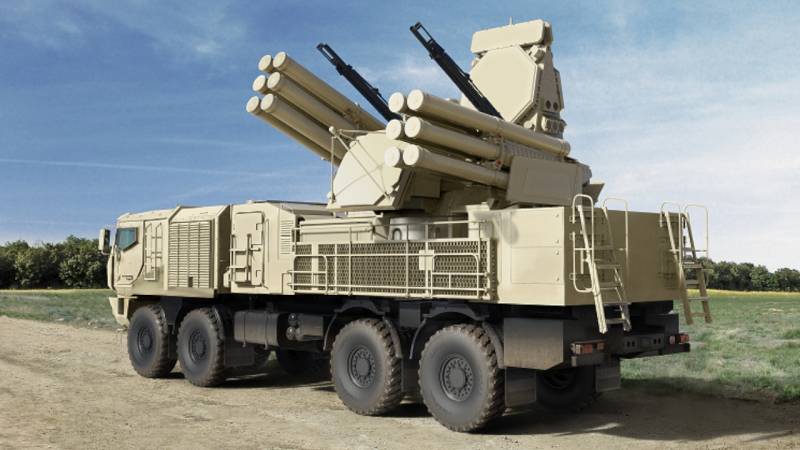 Modern reconnaissance and strike unmanned aerial vehicles capable of carrying guided weapons pose a significant threat to the ground forces. To combat such threats, anti-aircraft weapons with high performance and special capabilities are required. The other day it was announced that the modernized Pantsir-S1M missile and cannon system could provide protection against drone attacks.

The international military-technical exhibition EDEX-2021 is currently taking place in Cairo. The Russian industry is represented at this event by a number of organizations, incl. holding "High-precision complexes" and its parent state corporation "Rostec". In the form of full-scale samples and mock-ups, a number of modern weapons and equipment are demonstrated, incl. updated ZRPK "Pantsir-S1M".

According to TASS, during the Egyptian exhibition, Deputy Director General of High-Precision Complexes Sergei Mikhailov raised the topic of defense against UAVs and revealed the prospects of the modernized Pantsir in this context. The head recalled that countering drones is one of the main tasks for air defense. He also pointed out that now in our country two classes of anti-UAV weapons are being produced. These are soft-kill systems that use the principles of electronic suppression, and hard-kill anti-aircraft systems that destroy the target. The representative of the second class is the Pantsir-S1M air defense missile system. 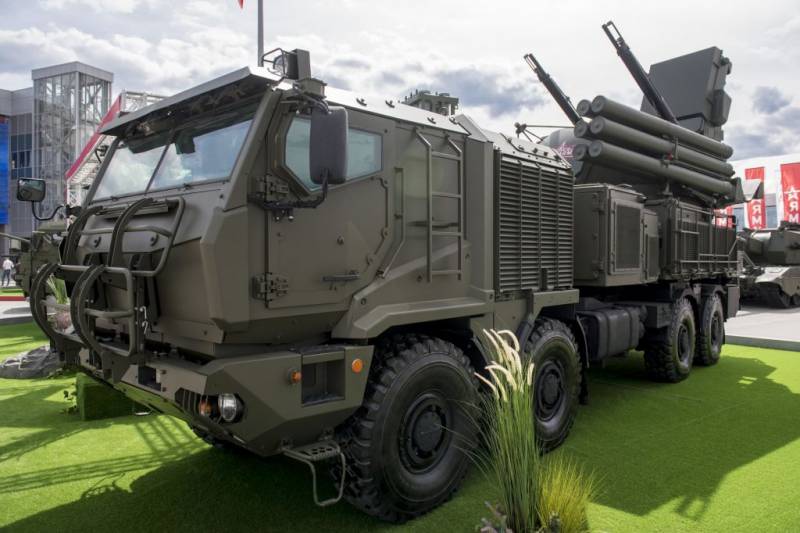 "Pantsir-SM" for the Russian army. Photo by Rostec
Earlier this year, at IDEX-2021, the Russian industry had a project for a control network combining systems of both classes. The modernized Pantsir-S1M air defense missile system should enter such a network and become one of its main components.

S. Mikhailov also said that Pantsir-S1M is distinguished by high economic efficiency. When fighting a UAV, it shows the necessary fighting qualities, and the cost of spent ammunition remains at an acceptable level. In general, such an anti-aircraft missile system is the least expensive anti-drone countermeasure on the market.

Bekkhan Ozdoev, Industrial Director of the Armaments Cluster of the Rostec State Corporation, supplemented S. Mikhailov's statements. He noted that as a result of the modernization, the characteristics of the Pantsir-S1M complex against UAVs have significantly increased. In particular, it can now detect and strike all types of attack drones currently in service with different countries.

According to known data, the Pantsir-S1M product is an export version of the Pantsir-SM air defense missile system, developed for the Russian armed forces. Both projects provide for the replacement of part of the radio and other equipment, and also offer an anti-aircraft missile with increased characteristics. At the same time, the capabilities of the export "Pantsir" are limited in comparison with the basic version of the "CM". 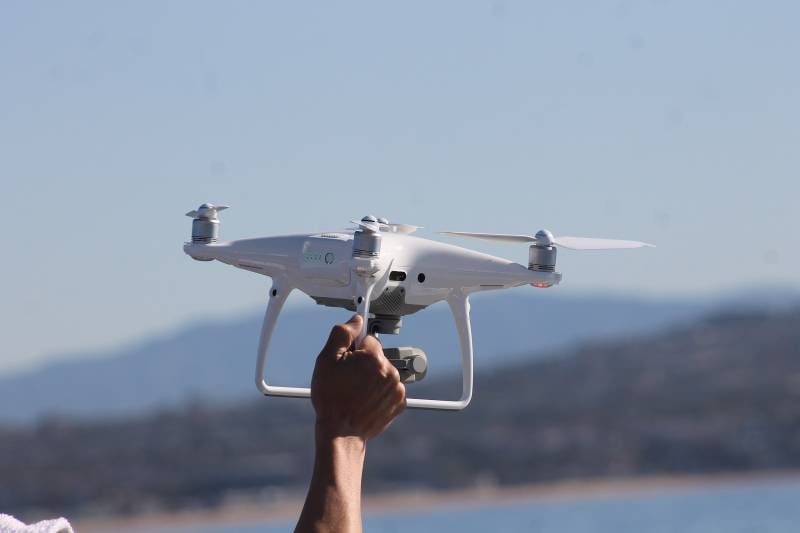 The commercial UAV DJI Phantom is one of the most popular models, incl. for military use. Photo Wikimedia Commons
Like the complexes of previous modifications, the new "Armor" can be mounted on different chassis or used in container design. The layout with a rotating combat module has been preserved, on which radar equipment and all weapons are located.

Earlier it was reported that the latest modernized versions of the missile and cannon systems receive new radar facilities. The improved radar is capable of detecting and tracking targets at ranges of up to 75 km, depending on their parameters. Preserved optoelectronic means for observing and tracking targets in the near zone. Other elements of the electronic complex have been modernized with an increase in all basic characteristics. Improved performance, improved noise immunity, etc.

In addition to the existing anti-aircraft guided missile, a new one has been created. The firing range of the new missile defense system has been increased from 20 to 30 km, the height of destruction - from 15 to 18 km. Due to the growth of flight characteristics, the volume of the affected area has been tripled. Radio command guidance is preserved, due to which the accuracy of shooting is determined by the improved characteristics of the airborne equipment of the ZRPK.

Another ammunition has been developed for the Pantsir-SM complex. This is a lightweight missile defense system of reduced dimensions with reduced power and limited flight characteristics. Such a missile is intended to combat small-sized targets for which the standard Pantsir missile defense systems are technically and economically redundant. Light rockets in transport and launch containers are placed on a quad-mount. The latter corresponds in diameter to the TPK of the main missiles, but noticeably shorter. 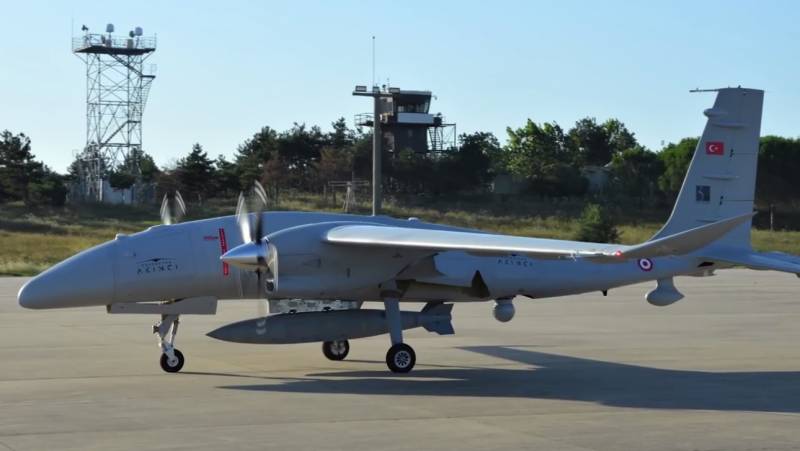 Heavy attack UAV Bayraktar Akıncı is a threat to the near future. Baykar Savunma Photos
The artillery unit on the Pantsir-S1M / SM remains the same. The defeat of targets at ranges up to 3-4 km and altitudes up to 2-3 km is provided by a pair of double-barreled 30-mm 2A38M assault rifles. Ammunition - 1400 rounds of various types.

Interception of an unmanned aerial vehicle is a rather difficult task, and its solution faces various difficulties at almost all stages. Thus, a small-sized plastic UAV is difficult to spot and escort; it is no less difficult to aim weapons at him. At the same time, a missile defense system designed to defeat full-size air targets, in terms of characteristics and cost, can be excessive for an intercepted drone.

In the case of the latest versions of the Pantsir air defense missile system, the task of detecting the entire spectrum of air targets, from aircraft to light UAVs, is solved with the help of modern high-performance radars, created incl. for such a job. Objects with low ESR are detected and accompanied by optical means. Yielding radar in detection range, optics show the required accuracy and reliability of capture.

It should be borne in mind that medium and heavy UAVs capable of carrying strike weapons are distinguished by their large size and appropriate visibility for the radar. Accordingly, Pantsir-SM / S1M or another modern anti-aircraft system will be able to detect such a threat in a timely manner and respond to it. 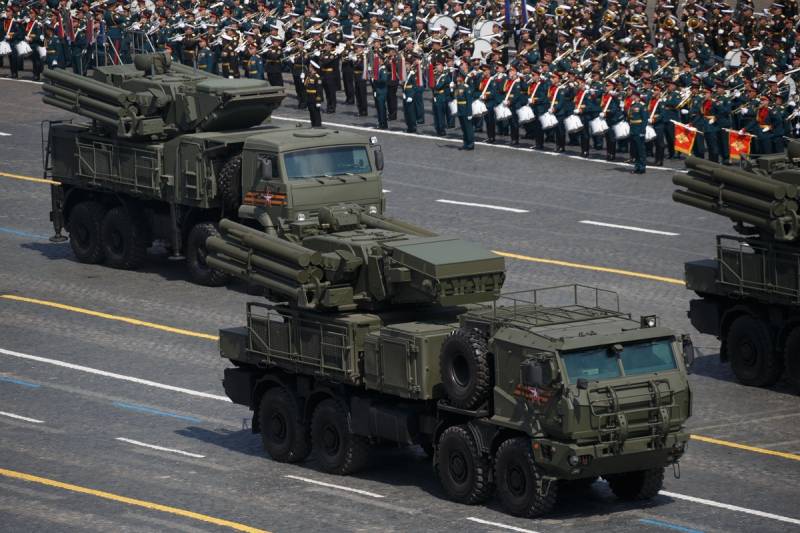 Parade crew "Carapace". In the foreground is the latest version of the SM, equipped with new light rockets. Photo of the Ministry of Defense of the Russian Federation
"Armor" of all modifications, including the latest "SM" and "S1M", can operate independently and as part of an echeloned air defense system. In the latter case, the air defense missile system can assume the role of a fire weapon, and transfer the detection tasks to other systems that have technical or other advantages.

The composition of a multicomponent defense system with separate radars, missile-cannon and other complexes, electronic warfare equipment, etc. can be determined in accordance with the current conditions and characteristics of the covered area. High-precision complexes believe that Pantsir-S1M is quite capable of becoming the leading element of such a system.

The creation of a new missile defense system with an increased range and altitude gives an obvious increase in combat qualities. In addition, improved radio equipment has a positive effect on such characteristics. In the near zone, the missiles are supplemented with cannons with a sufficiently high accuracy and power. Pantsir-SM also receives an additional light missile designed to engage complex small targets. However, as far as we know, it is not yet included in the set of the export Pantsir-S1M.

Sample for the market

Attention should be paid to the fact that statements about the new capabilities of the modernized air defense missile system were made at a foreign military-technical exhibition. At the same time, it was about the export modification "Pantsir-S1M". All this shows that our industry continues to promote its new development in the international market and is looking for customers. To attract future buyers, the heads of High-Precision Complexes and Rostec disclose all the most interesting facts about Pantsir in its new version. 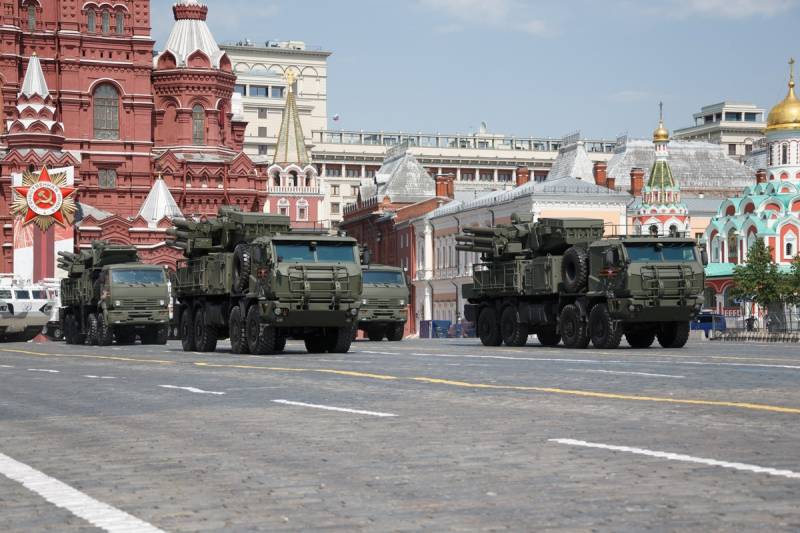 "Pantsiri-SM" on Red Square, 2020 Photo of the Ministry of Defense of the Russian Federation
It is highly likely that such "advertising" will be useful and influence the decision of potential buyers. Many countries are concerned about the development and proliferation of UAVs, and recent conflicts show the validity of such a reaction. At the same time, Russia is ready to offer modern air defense systems capable of dealing with both "traditional" air attack weapons and a new unmanned threat.

It should be recalled that Pantsir-S1M has ceased to be an exclusively exhibition model. In August this year, at the Army-2021 forum, the first contract was signed for the supply of such equipment to an unnamed foreign customer. In addition, we shouldn't forget the previous orders for the early versions of "Pantsir".

All this shows that Russian anti-aircraft missile-gun systems of the latest models are of real interest to foreign customers. At the same time, the achieved growth of characteristics and the emergence of new opportunities should attract additional attention. And it is quite possible that in the wake of the recent announcements and the results of the EDEX-2021 exhibition, new contracts will appear for the export version of the Pantsir.