On a new chassis with new capabilities: the state and prospects of the Bundeswehr engineering armored vehicle fleet 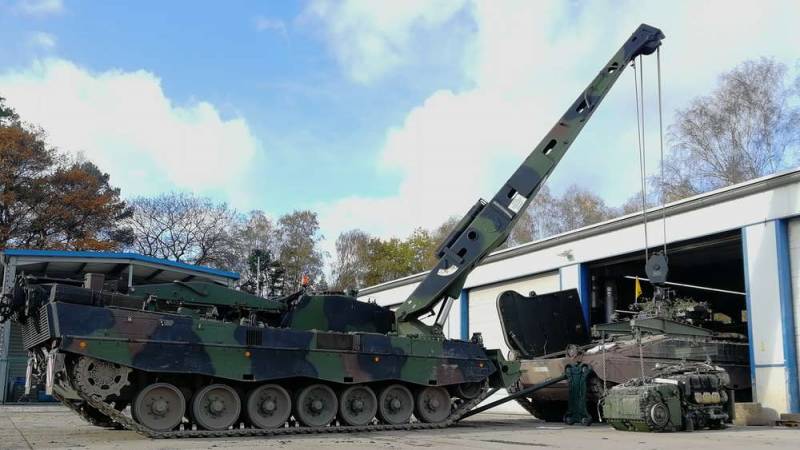 The German ground forces have a fairly large fleet of armored engineering vehicles for various purposes. Right now, a program for its modernization is being carried out, which provides for the gradual abandonment of some outdated samples and their replacement with modern technology. One of the main goals of such an update is a complete transition to the current chassis with high performance, which will provide advantages of a technical and other nature.

According to the latest reference book The Military Balance, more than 260 engineering vehicles of various types are currently in operation in the Bundeswehr. Engineering units and subdivisions have engineering Tanks / fencing vehicles, armored recovery vehicles, tank bridge layers and mine clearance vehicles. Solving their tasks, they must ensure the combat work of mechanized formations.

The most massive are ARVs - 120 units. This park includes approx. 60 old machines Bergepanzer BPz 2 and the same number of modern Bergepanzer BPz3 Büffel. The mobility of the units should be ensured by bridge layers: 22 old Panzerschnellbrücke Biber machines and 5 new Panzerschnellbrücke Leguan vehicles. Engineering barriers and similar tasks are performed by 57 Pionerpanzer 2 Dachs vehicles. There are still 24 Minenräumpanzer Keiler demining vehicles in service. 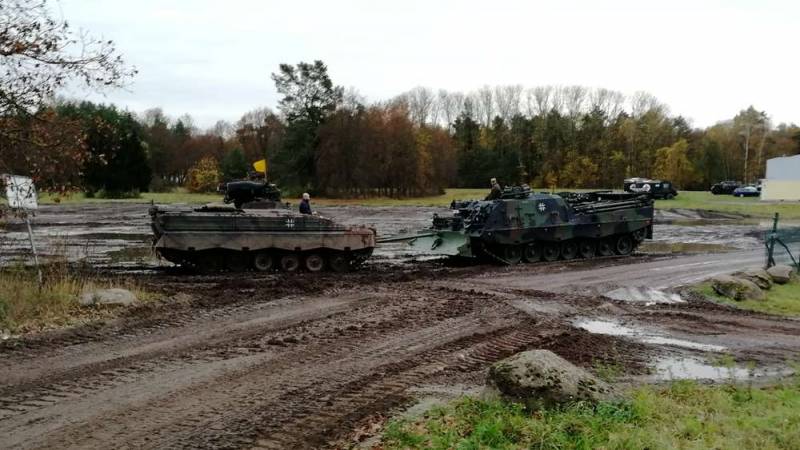 Towing a conditionally damaged armored vehicle
A characteristic feature of such a fleet is a fairly large number of equipment samples made on outdated chassis. Thus, the BPz 2 BREM and the Biber bridgelayer are based on the Leopard 1 tank, and the Keiler is based on the modified American M48 tank chassis. At the same time, there is equipment on modern Leopard 2 chassis, incl. the latest modifications - BPz 3 and Leguan.

De-unification, first of all, complicates the simultaneous operation of existing types of equipment. Several types of chassis require different supply of parts and require different maintenance. In addition, modern and outdated tank chassis seriously differ in their tactical and technical characteristics, which leads to additional operational and operational limitations.

For a general renewal of the park of engineering equipment as a whole and to correct the existing shortcomings, some samples are now being replaced with modern counterparts. At the same time, such replacement projects have different priorities and are carried out at different rates. In addition, the replacement of some products has been postponed for the time being. The sequence, priority and pace of measures to renew the park are determined by a number of factors. First of all, this is the compliance of the existing technology with the requirements and the availability of a newer model with improved performance. 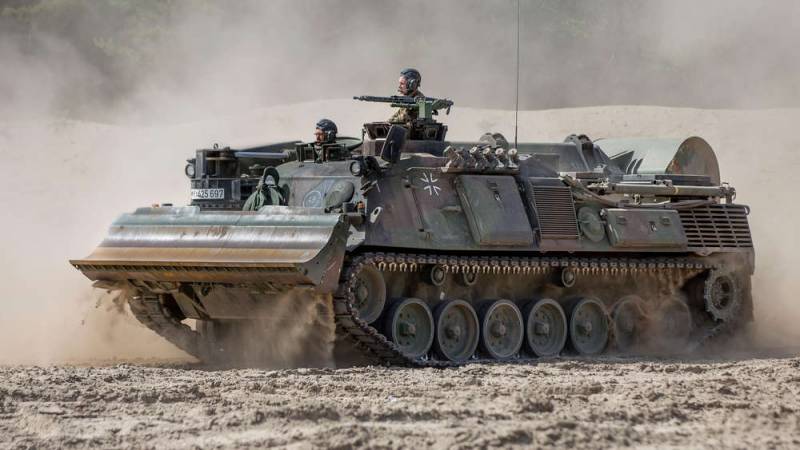 The main ARV in the Bundeswehr is the Bergepanzer BPz 3 Büffel ("Buffalo"). This vehicle was developed at the end of the eighties in connection with the appearance of the new main tank Leopard 2. This MBT differed from its predecessors in its increased weight, and the existing ARVs could not provide its evacuation. In this regard, a new Büffel vehicle was developed on the chassis of a new tank, having the necessary characteristics.

In the nineties, 75 such ARVs were built. For various reasons, their number subsequently decreased slightly, but they remain the main representative of their class, both quantitatively and qualitatively. Only BPz 3 are capable of fully working with Leopard 2 tanks of the latest modifications, which differ in their newly increased mass.

BREM Büffel differs from the basic MBT in the superstructure of the hull and in the presence of special equipment. A dozer blade is installed on the forehead of the body, also used to stop when pulling out equipment. On the starboard side there is a boom of a lifting crane with a lifting capacity of 30 tons. There are also two winches: the main one with a force of 35 tons and an additional one for 650 kgf. For self-defense, the vehicle is equipped with a machine gun and a large number of smoke grenade launchers. 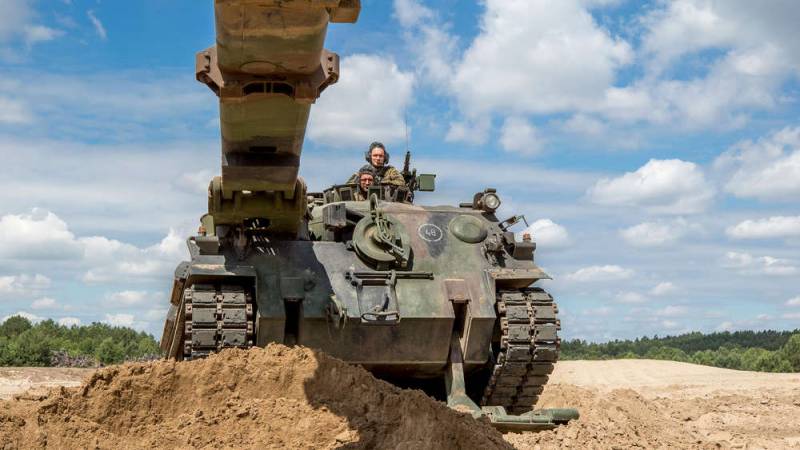 "Badger" on earthworks
Due to the unified chassis, the BPz ARRV can move in the same orders with the tanks, both on the roads and in the terrain. Using standard equipment, the vehicle can pull out any German tanks and provide the necessary assistance. In particular, it is possible to replace the MBT power unit in the field, which requires no more than 30-35 minutes.

In the late eighties, the "engineering tank" Pionierpanzer 2 Dachs ("Badger") was created. The chassis of the obsolete MBT Leopard 1 was taken as the basis for this vehicle. This choice was due to the acceptable characteristics of the tank and the presence of a mass of decommissioned vehicles with a large remaining resource. A total of 150 engineering vehicles were built; most of them were destined for the Bundeswehr.

During the restructuring at Dachs, the tank received a new superstructure with a telescopic boom equipped with a bucket and suitable for use as a crane. A lowering dozer blade was placed on the forehead of the hull. Several winches were also used. With this equipment, Dachs can open or fill trenches, clear debris and carry out a variety of earthworks. 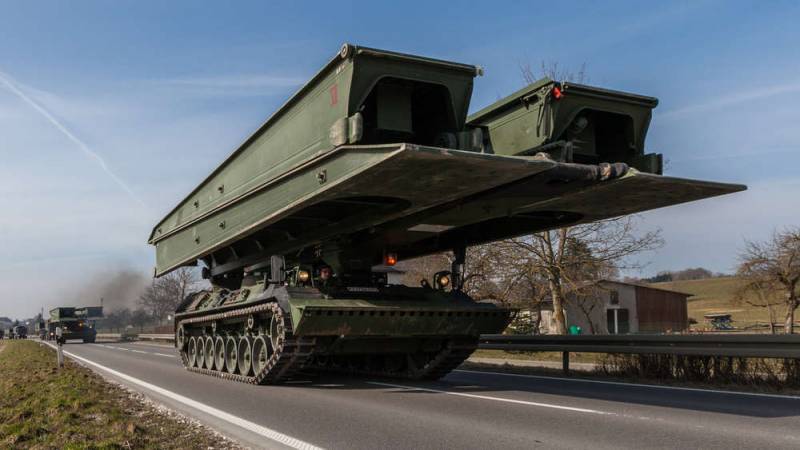 Tank bridge layer Biber in the stowed position
By now, the Leopard 1 chassis are outdated and Dachs will have to be phased out in the near future. In this regard, the Bundeswehr decided to purchase modern AEV 3 Kodiak ("Kodiak") engineering tanks on a new chassis. In the spring of this year, the first contract was signed for the supply of 44 units. such a technique. The delivery of the first machines is expected in the near future, and the order will take several years to complete.

AEV 3 can be built from scratch or modified from existing MBT Leopard 2. In terms of equipment and functions, this machine is similar to the existing Dachs, but has several important differences. The main thing is the new boom design. It is now three-cranked and has increased maneuverability. Also, a new bucket with the ability to grip objects was used and the function of a crane was retained. Instead of a standard bulldozer blade, a mine trawl plow can be mounted.

To increase the mobility of troops on the ground, the Panzerschnellbrücke Biber ("Beaver") tank bridge-layer is intended. This type of equipment was produced in the seventies and more than 100 machines were built. To date, only 22 units remain in the ranks. 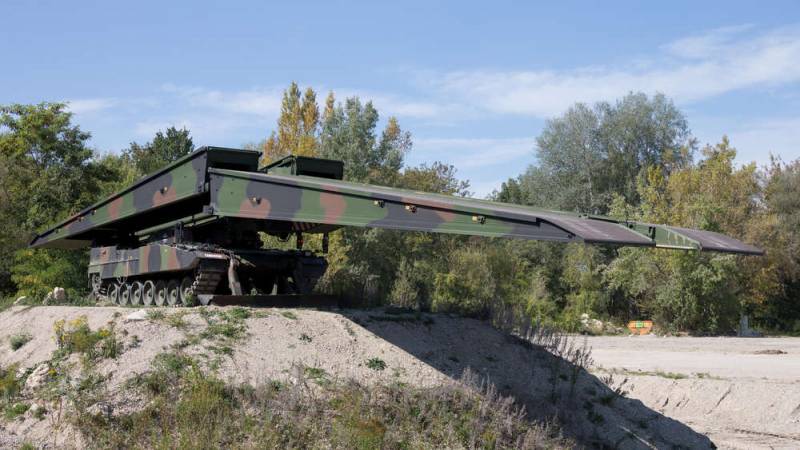 Leguan's state-of-the-art bridgelayer brings the bridge into working position
The Biber is built on a Leopard 1 chassis and has a 22 m long two-section track bridge with a carrying capacity of 60 tons. The bridge is divided into two halves. In the stowed position, one lies on top of the other, and before laying, the upper one passes along the lower one, they line up and connect. Unlike a folding bridge, such a bridge is less noticeable on the battlefield during the laying process.

The Biber's performance remains acceptable, but the base chassis is outdated. In the past, a new engineering vehicle Panzerschnellbrücke 2 was developed to replace it, but it did not suit the customer. Several years ago, a new project of the bridgelayer appeared - Panzerschnellbrücke Leguan (Iguana). The two new projects used the modern Leopard 2 MBT chassis and improved axle stackers, which also had increased characteristics.

To date, the Leguan bridgelayer has passed the necessary tests and was built in a small series. So far, the Bundeswehr has only five such machines, but in the future their number will increase. This will allow you to keep the number of bridges at the required level, as well as write off obsolete equipment with a minimum remaining resource. 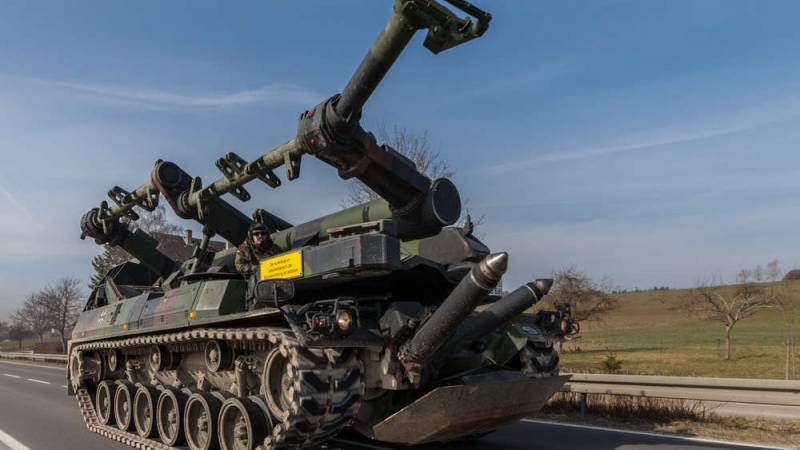 Demining machine Keiler in the stowed position. Working bodies are laid on the roof

In the second half of the nineties, the German army received 24 Keiler ("Boar") demining vehicles. This technique was performed on the modified chassis of the outdated M48 tanks, which received a set of modern components. The operation of such machines continues to this day, and plans to replace it have not yet been announced. That being said, some of Keiler's functions may be taken over by other samples, such as AEV 3.

When rebuilt in Keiler, the base chassis received a nose flap-stop, as well as a movable boom with a rotating striking trawl and an electromagnetic trawl. In addition, the machine is equipped with a device for marking the cleared passage using flags.

The Keiler demining machine is an example of an interesting approach to the operation of machinery. Despite the use of a hull with limited protection and other units of a long-outdated medium tank, it copes with the tasks set and has repeatedly demonstrated its potential in real operations. 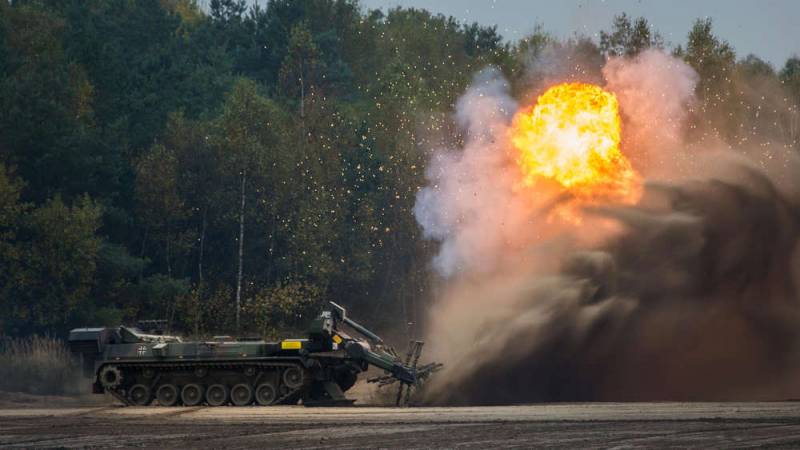 In the process of updating

Thus, the Bundeswehr has all the necessary samples of engineering armored vehicles with different functions. Tanks and motorized infantry can always count on their help - when crossing minefields, when overcoming various obstacles and even in case of damage. In general, the special equipment of engineering units increases the mobility of military groupings, which makes it possible to effectively fulfill the assigned tasks.

The engineering armored vehicle park is gradually developing. Based on current needs, objective constraints, etc. The Bundeswehr regularly orders the development of new models and brings them to acceptance for supply and operation in the troops. The emergence of such a technique makes it possible to abandon its old counterparts with obtaining new opportunities and advantages. And the next new items in the form of serial Leguan or AEV 3 are expected in the very near future.