A tactical victory for the Japanese fleet that became a strategic defeat. Battle of Santa Cruz

November 30, 2021
5
Read in the material from the creators of World of Warships - is the destruction of an enemy aircraft carrier worth the loss of more than a hundred aircraft? Demonstration naval battle of World War II ...


Despite the victory fleet USA June 6, 1942 at Midway Atoll and the seizure of the strategic initiative, the Imperial Japanese Navy still remained a formidable enemy. The Solomon Islands riveted the close attention of the Japanese command. And it is in this area that the battles will take place in the coming months. 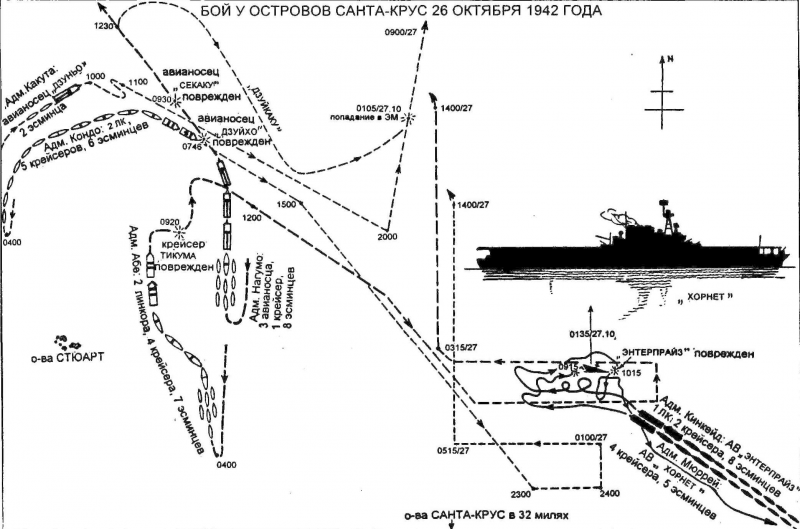 Battle Scheme
The long campaign began on August 7, 1942, following an American landing on Guadalcanal. With 6 aircraft carriers in the region against 4, the Japanese nevertheless were inferior in the air to the allied forces. This position was achieved at the expense of the Henderson Field airfield. Earlier, the American aircraft carrier Enterprise went to Pearl Harbor for repairs, while Wasp and Saratoga caught enemy torpedoes. Only the Hornet remained in the ranks.

In the Solomon Islands area, Admirals Tuichi Nagumo and Kondo Nobutake commanded two formations, which included six aircraft carriers. The supply of the Japanese on Guadalcanal was carried out by means of the "Tokyo Express". This is what the Allies called the detachments of Japanese destroyers who transported supplies and troops at night. Before the offensive, scheduled for October 20th, the Japanese battleships Kongo and Haruna struck Henderson Field.

Thereafter, in response, William Halsey was promoted to Commander of the United States Navy in the South Pacific. This order was given by the commander-in-chief of the US Pacific Fleet, Chester Nimitz. In addition, Enterprise, whose repairs were urgently completed by October 16, received a new air group. Meanwhile, the Japanese irrevocably lost the aircraft carrier Ryūjō, and Hiyō went to Truk for repairs. Only Jun'yō remained in the jurisdiction of Admiral Kondo, while Admiral Nagumo still had three aircraft carriers under command - Zuihō, Zuikaku and Shōkaku.

A great battle was brewing, and this was clear to both sides. Despite the presence of American scouts in the sky, the movement of the Japanese ships remained unnoticed by the enemy. The Japanese, in turn, were aware of the strengthening of the American aircraft carrier group. 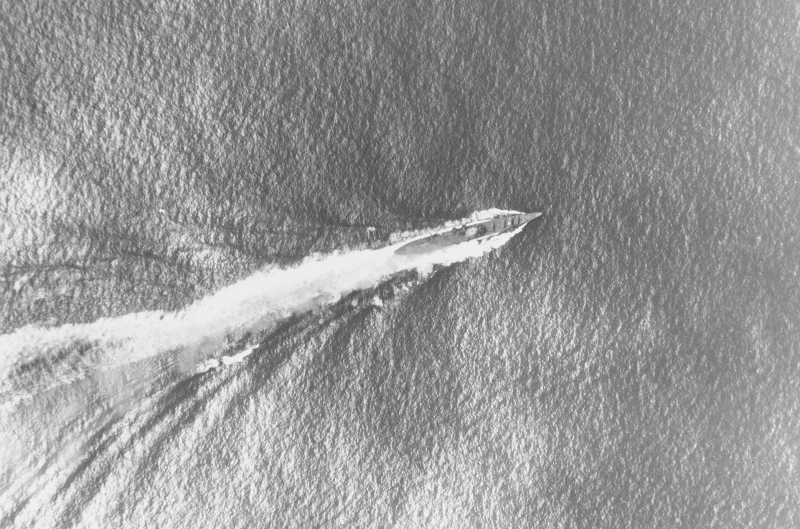 At 7:30 am on October 26, 1942, 370 aircraft took off from the Japanese aircraft carrier 66 kilometers from the enemy squadron. At the same time, the American Dontless patrols, which had taken off earlier, attacked Zuihō. Two 500-pound bombs hit the target and prevented the aircraft carrier from receiving aircraft on deck. However, the air groups that were on board could take off. 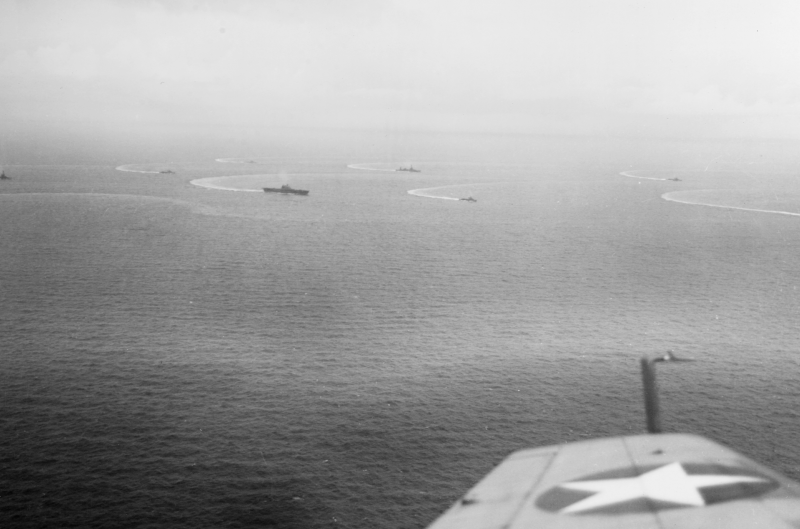 View from the wing of an American plane
To save time, small air groups were lifted from American aircraft carriers. The opposing air groups were in line of sight to each other at about 8:40. The Japanese attacked first from the direction of the sun and shot down five aircraft, losing four. But despite this, Shōkaku received serious damage, which was caused by the Americans who managed to bomb it. In addition, the heavy cruiser Chikuma came out of the battle as a result of the air raid.

The Japanese attack aircraft, which the American patrol interceptors were unable to stop, in turn hit the Hornet aircraft carrier. General confusion and error in the fighter guidance point allowed sixteen D3A bombers and twenty B5N torpedo bombers to reach the target. Despite high-density anti-aircraft fire, the Hornet was hit by three bombs and two torpedoes. In addition, two downed planes crashed into it. In total, the Americans managed to shoot down 25 enemy aircraft, losing six of their own.

Returning aircraft from the Hornet were accepted by the Enterprise, but the deck was already full. Fearing the next wave of Japanese airstrikes, the planes decided to land on the water. While trying to save the crew of a torpedo bomber, destroyer Porter was hit by a torpedo. The destroyer Shaw went to rescue the "colleague", which then finished off the damaged destroyer.

The planes flying towards Enterprise were spotted at 9:30 am. Due to the inconsistency of actions, the Japanese pilots achieved only two bomb hits, while losing 12 of 19 cars. The torpedo bombers never hit at all. Destroyer Smith was damaged, into which the downed plane crashed. A fire broke out, and to cope with the fire, the destroyer commander directed his ship into the wake of the battleship South Dakota. 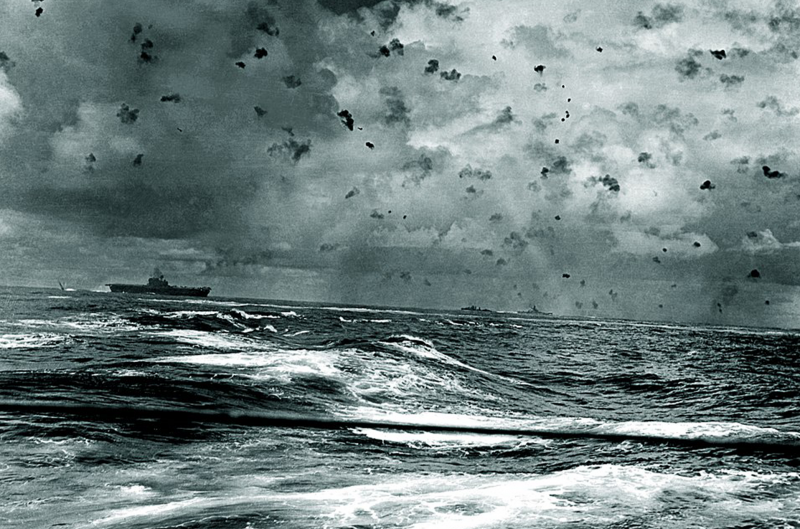 USS Enterprise at the Battle of Santa Cruz
The next attacked the air group from Jun'yō. The Japanese lost 11 of 17 aircraft in this attack, but were able to hit the cruiser San Juan, the battleship South Dakota, as well as several bombs exploded near the aircraft carrier Enterprise. Given the situation, the latter withdrew from the battle on the orders of Admiral Kincaid.

At about 13 o'clock, despite the losses, another wave of Japanese aircraft went to attack the enemy fleet. Their target was the damaged Hornet, which was in tow of the cruiser Northampton. The aircraft carrier was hit by a torpedo and an aerial bomb, after which it was abandoned by the team. Attempts by the escort destroyers to sink the damaged aircraft carrier were unsuccessful: neither nine torpedo hits nor shelling yielded results. The task was completed only the next day by the Japanese destroyers.

The battle ended on October 27. Since the enemy was not found, and the fuel was running out, the Japanese forces began to withdraw. The battle remained with the forces of the Imperial Navy. Not a single ship was lost. Two aircraft carriers and one heavy cruiser were damaged. However, the losses in the air groups were terrifying - 148 pilots did not return to the decks of aircraft carriers (the Americans lost 81 aircraft). The aircraft carriers Zuikaku and Hiyō left for Japan to replenish the crews of the air groups, while Shōkaku and Zuihō went for repairs.

The Americans lost one destroyer and an aircraft carrier Hornet, the destruction of which was a very sensitive blow to the US Navy. Only the Enterprise remained in the region, which was damaged in this battle and continued to serve in the Solomon Islands region after repairs. One battleship, one light cruiser and two destroyers also suffered minor damage.

By the way, the strike aircraft carrier Enterprise, which went through most of the battles with the Japanese fleet in the Pacific Ocean, was recreated in the vastness of the virtual World of Ships. Take a look at the legendary ship from a non-standard angle in this video from Wargaming.