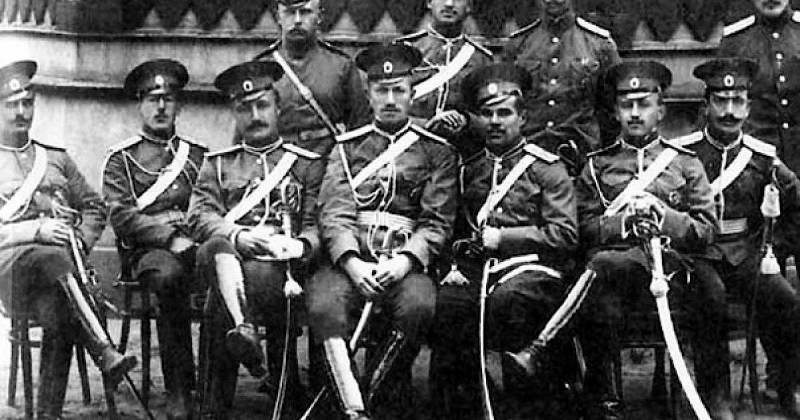 First, you need to clearly understand - the officers of the guard and army officers are different officers, exactly the same applies to officers naval, where the service has always been more prestigious, and the sailor is more literate, and the prospects are more cheerful. It was better in artillery, special relationships in the Cossack units, and the First World War turned everything upside down - the officer corps was seriously renewed and replenished with a mass of people who had not seen themselves in the army during the post-war period.


In general, the officer corps of 1917 is a special topic, and it is not always identical with the army of 1914, unless, of course, we talk about the generals and the fleet, where the decline was much less.

That time, when the officer is a hereditary nobleman, remained in the 19th century, and by the beginning of the First World War, the nobility largely decayed and lost its role of the service class. The young men did not rush to officer schools:

"... it should be noted that the career of an officer ceased to be tempting: the former nobility went bankrupt, became impoverished, began to look for livelihoods that were not given by military service, and involuntarily began to serve where the pay is better ..."
The article "Guard and Army" was written in 1913. There is evidence of Rediger:

"The honor was lost, and the officer's uniform became a target for all sorts of attacks."
And Denikin:

“But how hopeless, how meaningless and sucking life flowed from year to year in many such geographical points that you cannot find on any map: in the backwaters of the Western Territory, in various“ headquarters ”- military settlements built in a clear field and usually historical names, in the suburban slums, in the bearskin corners of distant Siberia, etc. ... And the strategic necessity or the availability of convenient learning conditions did not always justify the dislocation in the slums - and often a kind of understanding of the state economy. "
If we summarize the low salaries, the unsettled life (for example, the officers of the Dorogobuzh and Kashirsky regiments I described earlier lived in rented apartments, as a rule; the request of the colonel's widow with a request to allocate money to complete the education of children in the gymnasium, for neither at home nor a bank account in the husband did not make money), the low prestige of service in the eyes of society and the lack of motivation (the nobility did not give special privileges by 1914), then the unwillingness of talented youth to embark on the path of an officer's career is understandable.

Only in 1912, without examinations, they were admitted to infantry and cavalry schools - 1715 civilians and 452 volunteers. 20 percent of cadets refused admission. Until 1908, there was a negative balance, when more officers were fired per year than entered the army. The number of people taking the exam at the Academy of the General Staff also decreased - it did not provide a profession useful in civilian life. But more than 40 percent of those dismissed in 1912 are young people who, having received a profession, went to where they pay, in a modern way - to business. Russia, with a population of 180 million, barely manned the 40-strong officer corps. The best indicator of the prestige of the service - the children of the nobility in schools in 1910 were only 15 percent, but the children of peasants - 14, officers - 20.

The material aspect of service is Russia's eternal misfortune. If an officer-landowner of the time of Alexander the First could neglect this, and the prestige of the uniform was great, then in the time of Nicholas II the realities were completely different:

“The future Marshal of the Soviet Union Boris Mikhailovich Shaposhnikov recalled that as a young officer he received 67 rubles in the imperial army. salary, 9 rubles. apartment and 30 kopecks. per day on guard. He spent 12 rubles a month on lunches and dinners, 15 rubles on an apartment, 10 rubles on tea, sugar, tobacco, laundry, 10 rubles on uniforms, 10-15 rubles on deductions to the battalion, the orderly's salary was 3 rubles, after which 11-16 rubles remained, and with the addition of summer camp money - up to 20 rubles. "
A skilled worker in large cities earned no less, and an engineer or a doctor much more. No, the generals lived better, receiving from 1500 rubles a year, the colonel received, as a doctor in the district zemstvo - one hundred rubles a month. That's just ... a doctor is after university, and a colonel is for many a career outcome. He is a doctor and a doctor in old age, and an officer will retire in old age on a modest pension. Well, and the place of residence - the officer serves where he is sent, the doctor himself chooses.

Material is not only money, it is also an opportunity to spend it. And if somewhere in the county town for an apartment of 20-25 rubles, you can't start your own housing, there are no cultural institutions besides the Officers' Meeting, there is no normal school for children, well, there are a lot of restrictions, like marriage restrictions:

“The officers could not marry until they were 23 years old. And even when this happened, it was possible to get married before the age of 28 only by proving that there was money to support the family. It was required to confirm this by providing documents on a bank deposit (at least five thousand rubles) or on real estate, the annual income from which was supposed to bring the owner 300 rubles, and not less. Requirements were made not only for the groom, but also for the bride. According to the instructions, she had to have an ideal reputation and an annual income of 250 rubles. Marriages with divorced ladies and actresses were not approved - for this the officer could be dismissed from the ranks of the army. "
And others: a ban on taking change from any bill, a ban on visiting cheap hotels and pubs, a ban on carrying luggage on your own ... And at the exit, a lieutenant colonel and a pension - 60 percent of the content. So the widows of retired colonels asked to raise their daughters' money ... And behind all this there was a choice for literate young people - service in the town and problems or a civil career and good money without risk to life and health.

With this, there was just complete order, as well as with honor and conscience. Perhaps even too much - the epidemic of suicides, due to minor violations of the concepts of honor, the army was not good. Nevertheless, the education of young officers was at a height - loyalty to duty, to the word, respect for the honor of uniforms and the flag was instilled. An eloquent example - in the First World War, only 15 percent of losses among officers were prisoners.

All this was achieved both by educating future officers and by strict rules of service - those guilty of dishonor were expelled from service mercilessly. Duels were another means of maintaining high morale, which on average took place up to 20 a year.

There was a fight against the massacre and insults of the lower ranks:

“In the Kazan military district, the second lieutenant hit his orderly for coming drunk. The officer's youth was taken into account, and he received 30 days of the guardhouse. "
In principle, by the First World War, assault in the army was minimized. At the same time, the officers themselves did not enjoy the love of society:

“In our civilian educational institutions to this day there is no mention of the armed forces of the state, and a huge number of our future citizens in this regard are brought up in complete ignorance. There is no need to talk about higher educational institutions. "
Moreover, before 1910 there was no military-patriotic education, and after that only its external manifestations in the form of the scout movement. In fact, the army was alien to society, and society, with its political ferment, did not accept the army.

“... the intelligentsia regarded military affairs as a profession unworthy of a cultured person; in addition, she was hostile to the Russian officers, for she saw in him the main support of the autocracy ... "
Nevertheless, the traditions of army partnership remained until 1914, when they began to be eroded by the conscription of a huge number of civilians who had not gone through school, educational institutions, or regimental partnership.

As for politics, the RIA officer corps was apolitical, it cannot be considered monarchist, because the monarchy for most officers was just a symbol of the state, but liberalism in the army was not welcomed, because army discipline was far from it in all eras. In general, it was considered shameful for an officer to get involved in politics, which led to the ideological crisis of whites in the Civil War. These contradictions between society and the army were only deepened by the First Revolution:

“For 1905, the total number was 25 companies, 283 squadrons and hundreds (the total number of calls - 5354). Of this number, 3893% were used “to catch vagrants and robbers, to carry out searches and take away weapons"."
The massive use of the army as punishers and the terror of the revolutionaries against the officers put a barrier of enmity between the army and the politically active part of society.

“... our cadets are usually taught to make excellent rifle techniques, to march superbly ... they are forced to study diligently the duties of a sentry, a company officer on duty, orderlies, etc., that is, they prepare good privates from cadets ... completely forgetting that officers must come out of them ... "
The disadvantages of the professional training of RIA officers were the predominance of theoretical studies over practical ones, an emphasis on drill training and regulations. The program of the Officer Rifle School, which trained the battalion commanders, has been preserved - the study of personal weapons (assembly-disassembly, shooting) - 144 hours, tactics - 24 hours. I will repeat myself - battalion commanders, that is, serving officers with a long record of service. In the end, it turned out what happened - great shooters and brave men ... poorly knowledgeable of the map and tactics.

And only in 1910 the situation began to improve, new instructions and training programs were adopted, but alas, it was too late. The officer corps from the comrade and above approached the Great War with the same baggage of knowledge that was received from the instructions that led to the defeat in the Russo-Japanese War. So, for example, the "Regulations on the field command of troops in wartime" was adopted only in 1914. The measures to dramatically increase competence were colossal in scale, but a decade late. To be fair - in other armies of the warring parties, the problems were much the same.

So what was he like, a Russian officer? The man is undoubtedly personally brave, with solid notions of honor, but at the same time intolerant of any opposition and politically naive, perfectly trained as a fighter, but much weaker as a thinking commander. They are not respected by society and are wary of society, as something anarchic and thoughtless. It seems to me that the root of the Civil War is largely in this portrait - some of the officers went over to the side of the new state, while others put things in order - the way they understood and knew how. And neither justify nor blame them. These people served the Tsar and the Fatherland, the Tsar abdicated, and the Fatherland began to crumble, and everyone decided for himself, despite the fact that they were not taught to solve political puzzles.