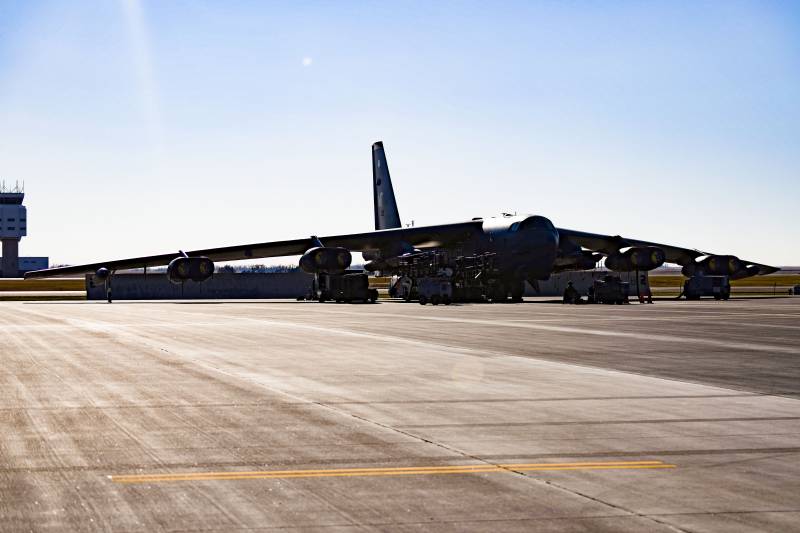 In early November, the Strategic Command of the US Armed Forces (STRATCOM) held the next annual Global Thunder 22 command and staff exercise. During these maneuvers, the operation of existing command and control systems was tested, the interaction of various structures and agencies was tested, and practical measures were taken to prepare for the use of weapons against a conditional enemy.

On the first day of the month, STRATCOM announced the launch of the Global Thunder 22 exercise, which was to take place from November 2 to 10. It was reported that the purpose of this event is to conduct "realistic training" of nuclear forces with their use against a mock enemy. The scenario of the maneuvers involved checking the readiness of silo-based missile systems, strategic submarines and long-range aviation... In addition, various structures and organizations of the Pentagon and other bodies were involved in the exercises in different roles and rights.

On the first day of the exercise, the deployment of the involved aviation units and their preparation for early training flights began. For example, several B-52H bombers from the 2nd Bomber Wing flew from their Barksdale airbase (Louisiana) to Minot airfield (North Dakota), where the 5th Air Wing is in service. The personnel of the two formations jointly completed the necessary planning and prepared the equipment for departure.

The task of providing long-range strategic aviation flights was entrusted to several formations of tanker aircraft. These were the 22nd, 92nd and 507th refueling wings from McConnell (Kansas), Fairchild (Washington) and Tinker (Oklahoma), respectively. They were to be on duty in designated areas and carry out refueling of bombers flying to targets or returning to their airfields.

A less visible but important participant in the exercise was the 91st Missile Wing from Minot Base, which operates Minuteman III intercontinental ballistic missiles. This unit has demonstrated its skills in the safe operation of strategic weapons, as well as demonstrated the ability to be on constant alert and readiness to use missiles at any time. 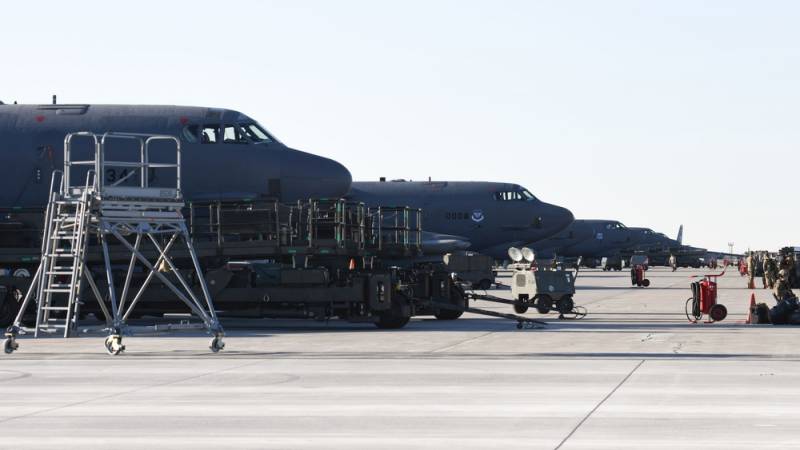 Aircraft of the 5th Bomber Wing involved in the exercise, November 3
The naval component of the strategic nuclear forces in the exercises was represented by the 9th group of submarines (SG9), assigned to the Kitsap base (Washington state). Several SSBNs of this formation went out to sea and carried out patrols along the specified routes. The interaction of ships with each other and with other pennants was worked out. In particular, supplies were reloaded at sea. In addition, new approaches to connection management were tested.

It is curious that in the official communications of the Strategic Command only the most general aspects of the past exercises are mentioned. The press service of this structure writes about the great importance of maneuvers and individual events, and also quotes relevant officers and generals. The main theme in this case is the overall significance of the exercise Global Thunder 22 for the national security of the United States and for the preparation of individual formations.

However, the most interesting data on the past exercises are not provided. Bomber flight routes, strategic submarine patrol areas and missile unit exercises have not been officially published. In addition, it is not reported about the training use of weapons, about the purposes for it, etc.

However, it was not possible to hide all the features of the exercises. Some episodes of the exercises were held near third countries, which watched them with interest. Foreign observers did not make a secret from the information collected and received. In addition, it has become the subject of criticism and accusations.

On November 17, the exercise of Global Thunder 22 was condemned by the DPRK Ministry of Foreign Affairs. The department openly called the exercises conducted "in an atmosphere of hostilities" as a clear preparation for a nuclear war. The Foreign Ministry considers such actions reckless and calls for an immediate end. In addition, the US was demanded to stop building up its nuclear potential. 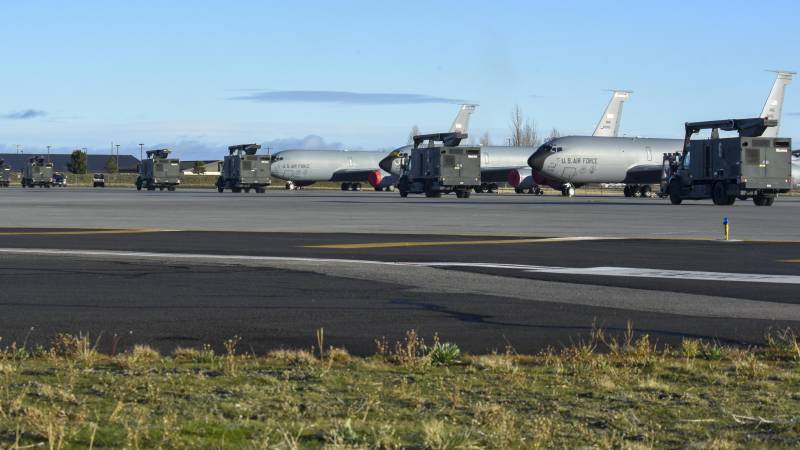 Tanker aircraft from 22nd Air Wing, 7 November
On November 23, an international video conference was held with the participation of the defense ministers of Russia and China. Army General Sergei Shoigu and Colonel-General Wei Fenghe discussed a number of pressing issues, incl. recent American teachings. So, the Russian minister described the general situation at our borders, and in addition, he disclosed data on the Global Thunder 22 exercises.

According to S. Shoigu, during the American exercises, 10 strategic bombers were seen near the borders of Russia. The flights were carried out both in the western and eastern directions. The planes approached our borders at a distance of up to 20 km and practiced the use of nuclear weapons. At the same time, the Russian air defense timely identified approaching air targets, monitored their actions and took measures to prevent possible incidents.

All this is happening against the background of a general increase in the activity of the US Air Force near the Russian borders. Over the last month, approx. 30 flights, which is 2,5 times more than in the corresponding period last year. S. Shoigu also cited as an example the activity of the US strategic aviation over the Sea of ​​Okhotsk. So, in 2019, only three flights were recorded, and in 2020 their number increased to 22.

According to the official version, the annual exercise of the Strategic Command Global Thunder is intended to practice the actions of nuclear forces in peacetime and wartime. In addition, with their help, a potential adversary is shown a willingness to defend national interests using all available forces and means.

It is well known and has been repeatedly pointed out that Washington is now considering Moscow and Beijing as potential adversaries. It was to them that the recent "signal" in the form of large exercises of the strategic nuclear forces was intended. In addition, by such measures, the United States shows its allies that they can count on protection from Russian or Chinese aggression. 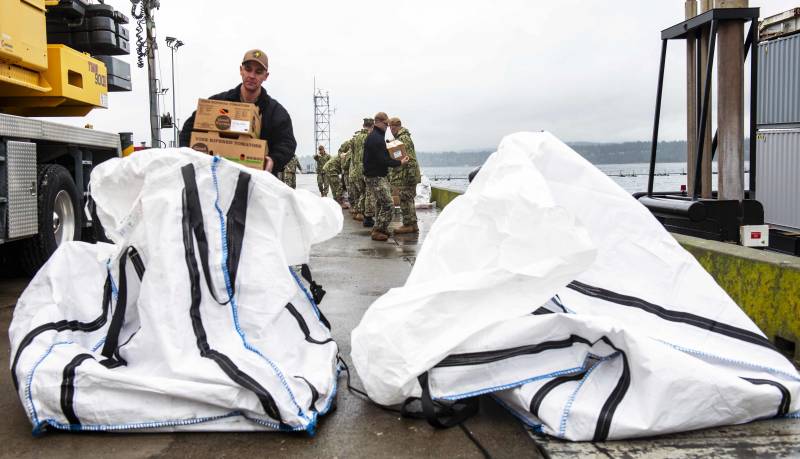 The naval part of the exercise. There is a preparation of cargoes for transfer to submarines. November 4th
It should be noted that such a demonstration of the ability to repel aggression is far from peaceful. The presence of bombers near Russian borders or SSBNs in the Pacific Ocean in patrol and launch areas appears to be a full-fledged threat. The 91st Missile Wing, for obvious reasons, did not participate in the "demonstration" part of the exercise, but its involvement in the activities can also cause concern.

However, the threat does not remain unanswered. Thus, the bombers participating in Global Thunder 22 were spotted at a considerable distance from the Russian borders and were successfully escorted. Our military forces closely monitored them and took steps to rule out incidents. In this way, the Pentagon was shown that all the official and unwritten rules must be observed near the Russian borders, otherwise the most unpleasant consequences are possible.

In addition, while demonstrating its nuclear potential and ways of using it, Washington should not forget that China and Russia have similar capabilities. The nuclear forces of the two countries are on constant alert and are ready to respond to aggression at any time. Moreover, for such an answer, they do not need to make demonstration flights near the American borders.

The desire of the United States to defend national interests by all available means is quite understandable. However, in these processes it is necessary to know when to stop and not to cross the known lines. Otherwise, the planned exercises necessary to maintain the required combat capability will resemble real provocations and further worsen the already difficult international situation - as has been observed in recent years.

To solve the assigned tasks of maintaining combat effectiveness and demonstrating capabilities, but without direct threats and provocations, the Pentagon should more reasonably and soberly draw up plans for future exercises. It is necessary to correct the routes of flights and patrols, removing them from the borders of third countries, change the rhetoric, getting rid of clichés about foreign aggression, etc. In this case, Washington will not have to face accusations of reckless behavior and preparation for a nuclear war.

However, the actions of the US military and political leadership, observed from year to year, show that it is not interested in such results. This means that exercises of various scales near the Russian borders will continue - and our army will have to closely monitor them, avoiding possible negative scenarios.