War as a way to kill the statehood of Ukraine 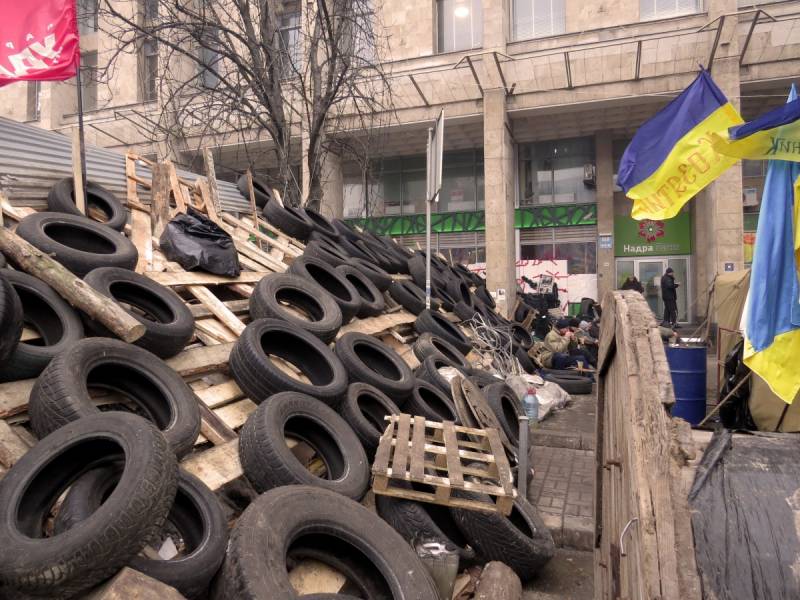 The main topic, which simply cannot be ignored today, is the leitmotif of Russia's imminent attack on kind and peace-loving Ukraine. Opinions are heard from almost any iron about the correctness of the Americans, or about pressure on Kiev to start hostilities, but more often about whether Russia will attack or not.

It seems that people are crazy. They are ready to fight! Moreover, the Europeans, except for the British and Swedes, are looking at this war from the outside.

"Yes, we will impose sanctions, we will express deep concern, but we will not fight for Ukraine."
The Americans, too, do not hide the same sentiments.

"We will help with weapons, ammunition, equipment, but not a single American soldier will go to fight in Ukraine."
Even the most notorious "hawks" in the US Congress become quiet when the question of the American army in Ukraine is raised.

Yes, they have long been developed and will be introduced instantly, after the start of the war! The most severe sanctions! But such that they would not be noticed by the Russian president: to limit the use of Visa cards for oligarchs, to ban travel to London and other favorite vacation spots for moneybags from Russia.

Moscow says every day that it is not going to attack a neighboring state if Kiev does not aggravate the situation in Donbass. Demonstrates the lies of the American publications through which this duck was thrown. Like a teacher at school, with a pointer, he shows the distance to the Ukrainian border of those storage bases that so excited the Americans.

And only in Kiev, in the office of the President of Ukraine, they sacredly believe in the attack of the Russians, in the ability of their own army to resist the enemy, in support of NATO and the United States not only with "deep concerns", but also with soldiers. “The whole world is with us” and the whole world is just waiting to start receiving coffins from the Donbass steppes.

Why do Russians need Ukraine?

I deliberately put the question in the title a bit provocatively.

Any Russian and the majority of Ukrainian citizens can fill their faces for such a question. Ukraine was and remains a territory inhabited by a fraternal people. And not in the figurative, but in the most direct sense of the word.

Dig deeper into the pedigree of a Russian or Ukrainian and you will see that someone once came from Ukraine, someone left for Ukraine. Moreover, this applies not only to Russia, but also to the entire former USSR. This is how the Soviet Union was organized, that after graduating from universities, young men or women could be sent to work in any republic.

I posed the question more narrowly.

Why do we need SUCH Ukraine?

A country that is heading towards its own extinction by leaps and bounds. A country where, instead of forming a single nation, they are trying to forcibly Ukrainianize other peoples. A country where power belongs ...

Although what I mean, the power does not belong, the power lies underfoot, judging by the results of almost any ongoing or implemented reform. It is easy to instill in a person that he is living badly because he is struggling with someone there. But to instill in the stomach that it is full and do not want to eat is much more difficult.

Ordinary citizens of this state almost every month are faced with new inventions of the authorities to worsen their lives. This is the lack of jobs in cities, the inability to sell crops to farmers, the lack of electricity, heat, etc., etc., etc.

So why do we need such a country?

There are so many of our own that we will be domesticating them for centuries to come.

Is the same история, and if any of the businessmen still wants to extract them, he will find a way to do it.

Those who wanted to have already become or will soon become citizens of Russia.

We don't need to lose our guys in the war against the Zelensky regime. We're an Asian. And our Asian part tells us that it is better to sit on the sidelines and see what happens. At the same time, put a slingshot next to it in order to scare away those who climb into the Donbass.

From the point of view of our geopolitical interests, it is important for us to preserve Ukraine as a big state! Let it be without part of the territories (and in the end, western Ukraine, most likely, will be returned to those from whom these lands were taken away in 1945), but a large and strong state.

We talk and write a lot about politics. I propose to slightly change the approach.

We know very well how pragmatic Europe is. From this point of view, we will consider the relationship between the EU and Ukraine.

Have you ever thought about the root cause of such active destruction by Western countries of a huge (by European standards) state like Yugoslavia?

After all, they rushed to kill almost all European countries, led by the United States.

In Europe, a system of state relations has long been formed, when there are big and strong and there are others. We will not consider tales about the fact that Germany or France are equal to Estonia or any other Baltic country. Each cricket knows its own six.

What happened after the collapse of the USSR?

Suddenly, instead of one huge Soviet Union and socialist countries, Europe got several large states at once, capable of becoming competitors to the traditional "big and strong".

Remember where Yugoslavia and Ukraine stood in 1991 in terms of their economic potential?

The war, which went to Europe, and was aimed at splitting up a large and strong state.

What do we see today?

A bunch of small, practically insignificant in world politics, states that are simply forced to become vassals to the "big and powerful". Retinue of the leading economies of Europe.

More recently, the largest and most economically developed state in Eastern Europe. Even Poland, for which Ukrainians are praying today, had a smaller population; I will simply keep silent about economic development.

And now the question.

Does the EU need a country that, while maintaining it, will break the traditional economic and political structure of Europe?

Greater Ukraine, as it develops, will demand its place in European politics and economics.

Are there those who will agree to live worse in order for Ukraine to live better?

I think now it is clear why the Europeans are pumping up our southern neighbor weapons and money. It is clear why the Ukrainian authorities are forcing them to tell the people stories about the Russian threat. It is understandable why the Nazis are not noticed on the Kiev streets.

Europe sleeps and sees instead of Ukraine a handful of small countries ready to do whatever "big and strong" wants.

And immediately after this disintegration begins, we will see a massive admission of ce-Europeans to the EU and NATO as part of their microstates.

Does the USA need Ukraine?

Unlike Europe's “economic” approach, Ukraine was politically important for the United States. As a territory that will constantly irritate Russia. A sort of state hemorrhoids for Russians.

Alas, for Ukraine, but US priorities have changed. The Kremlin calmly reacts to all the "scarecrows" of the Americans and NATO, periodically demonstrating weapons that the Western military has never dreamed of yet. Remember the bomber over the American ship in the Black Sea, after the flight of which all control systems simply died.

There were also "Calibers" from the Caspian Sea, which showed an efficiency many times greater than the "Tamaghawks". There were hypersonic missiles. There was a shot satellite in Earth orbit. There was an accidental slip of the tongue from President Putin about some kind of kinetic weapon ...

Increasingly, Washington began to listen to the military. The Pentagon, through the lips of its retirees, calls for a transition from emotions in the Ukrainian issue to reality. The military understands that it is more expensive for themselves to get involved in an open conflict with Russia. In this case, there is no guarantee that any of the Russian "toys" will not fly right into the heart of the American army.

Here's one quote from a former US State Department official, Samuel Charap:

“Since the Russians have been occupying Ukrainian territory for seven years now, they know very well that we are not going to send the 82nd Airborne Regiment there. And I believe that they probably took into account and appreciated everything except this, in the sense that they are ready to pay this price. "
True, there is another point of view, which will also not particularly please Kiev. Former CIA officer Martijn Rasser:

“The concentration of Russian troops is partly to see what Brussels and Washington are going to do. One of the goals of this military action, Putin sees in assessing the determination of the West in relation to the protection of Ukraine. "
The USA is busy with another problem today.

Today, China is in first place. It is this confrontation that is now more important for Washington. Any conflict, any aggravation of relations with Russia will give Beijing a chance to conclude a military alliance with Moscow. That will make life very difficult for the American authorities.

As we can see, each of the parties has its own interest in resolving the Ukrainian issue. The interests of Europe and Russia are fundamentally different, and the interests of the United States do not in any way affect the fate of the country.

The "Russian attack" that many Ukrainians dream of will indeed mark the beginning of the end of the Ukrainian state. In this case, it will be impossible to stop the process. The divide, which so far few see, will become obvious to everyone.

It will be good if the country does not turn into another Walk-Field. It will be good if new "fathers Makhno" and "lords atamans Gritiana Tauride" do not appear in the regions. There is no more deadly tactic for Ukraine than this war ...