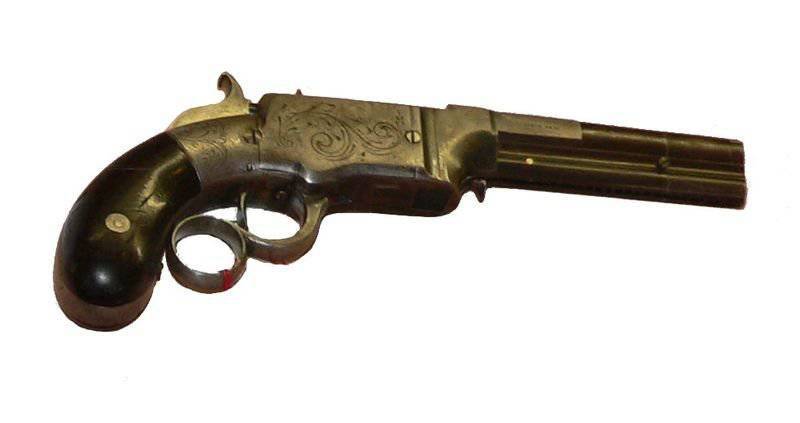 Probably not among the people of those who at least once in their lives, even on the TV screen, did not see weapons with Henry's brace. Immediately, you can remember any film about the "gold rush" in North America or the more famous and massive Terminator, in which young Arnie smashed from the 1887 Winchester edge of the year everything that came across on the way, while immediately reloading the weapon with one hand, holding him for brace henry. Henry's brace, which is also Henry's lever, is a lever that, in its normal position, fits on the butt of the weapon, so that the hand holding arm enters the extended ring for them in the lever itself. Holding the weapon by the handguard, the lever can be moved down and back into place, reloading will occur, and the arm will fall again to hold the weapon comfortably. Named such a device in honor of Benjamin Henry.

Until recently, I, like many, thought that this person was the inventor of such a really convenient and original device, but the information found not only allows to doubt it, but also to completely prove that this person has very little to do with the details of the weapon, called in his honor. I will try to present my thoughts and the information found in this article.

It all started with the fact that I was thrown into an article about Volcanic pistols, a weapon that is truly original and, more importantly for that time, a multiply charged one. So, the pistol was a rather beautiful device that was, in addition to beauty, simple and reliable, like a hammer. The pistol was powered from a tubular magazine, which was located under the barrel of the weapon, while reloading was carried out using a miniature Henry brace, into which only one middle finger of the holding hand entered. I don't know what prompted me to compare the dates of the weapons patents in this design, apparently the fact that Volcanic is little known in our time, unlike long-barreled weapons with Henry's brace, and as you know, original designs are much less widespread. than their modifications. So the result of the comparison was that the Volcanic pistols were patented on February 14, 1854, while the first rifle received its patent in 1860. And now the most interesting thing, in fact, the inventors of the staple Henry were Horatio Smith and Daniel Wesson, who in the future founded the world-famous Smith & Wesson company. Here is such historical the fact was revealed in the process of studying the Volcanic pistol, I think that I was not the only one to be mistaken about the authorship of the staple Henry, which should rightfully bear the name of other famous gunsmiths. However, with the weapons of the Winchester company, everything was not always smooth and straightforward in the names, so this fact cannot be said to greatly surprise me. Let's try to get acquainted more closely with the gun and its design, developed by Horatio Smith and Daniel Wesson.

So, the Volcanic pistol was created by two famous gunsmiths in 1854. This invention was supposed to completely turn the world of firearms, significantly increasing the speed of firing, however, pistols did not receive wide distribution. Despite the fact that the massive proliferation of weapons can not be called in any way, it was nevertheless produced serially, and therefore were the buyers of these pistols. It was with these weapons that Smith and Wesson declared themselves to the world by setting up their first company, 20 June 1854, to release these pistols. She specialized in the production and repair of Volcanic pistols, and was located in the state of Conecticut in the city of Norwich. At this time, inseparable gunsmiths established the release of pistols in just two calibers, .30 and .38, with an 4 and 8 barrel lengths of an inch, respectively, and even managed to produce 1200 weapons, after which their company closed.

The reasons for the closure of the company were quite compelling. The fact is that initially not the most successful weapon ammunition was selected. Characteristics of cartridges were quite satisfactory, but the price for them was not the smallest, which, naturally, did not contribute to the wide distribution of weapons. So, for 1000 .30 caliber cartridges had to give 10 dollars, while 1000 cartridges with 32 caliber required hundredths of an inch 12 dollars, which at that time was not enough. However, this did not stop gunsmiths. Having found partners who saw the potential of weapons, among which was Winchester, Smith and Wesson, who is notorious for us, open a new company, within whose walls they are launching pistols for the most common ammunition at that time. Fundamentally new pistols did not differ from the previous ones, but given the fact that they began to use quite different cartridges, it took time for the production to work in full force. So, in the first year, all 600 weapons were released, which were far from being the most popular. The production was located this time in New Haven. 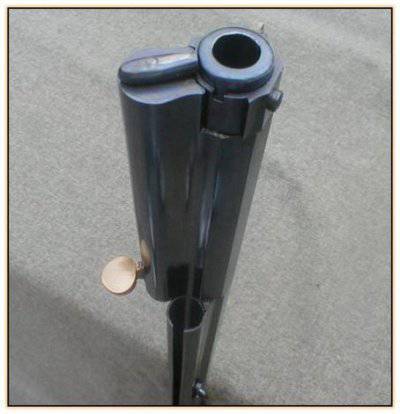 Soon Smith and Wesson left the company, unfortunately, it is not known for what reason, although, most likely, because their truly revolutionary invention in firearms was unclaimed. In the end, only Winchester remained from the founders, who first continued to produce these pistols, and later, with the help of his designers, adapted the pistol device for long-barreled weapons. That’s how it became the most famous and popular at that time, and the pistols were simply forgotten over time. As well as they forgot where the Henry brace came from, what kind of weapon preceded the long-barreled models and who is the author. However, Smith and Wesson received their recognition without their first invention.
The principle of operation of the gun is quite simple. With the retraction of the bracket down, the weapon’s firing mechanism is retreated, at the same time a new cartridge is picked up from the tubular magazine under the barrel. When returning the bracket to its original position, the cartridge is sent into the chamber, while it is securely locked, even the most powerful of the modern cartridges will not be able to move the bracket back when fired, as all the energy goes into the shooter’s hand in the form of recoil. Well, and pressing the trigger pulls the drummer or the trigger, depending on the design of the weapon, after which everything repeats. It should be noted that when using only the middle finger, which is included in the ring bracket, the convenience of the weapon was very, very relative. First of all, the reason for this was the use of gunpowder which was completely different from the modern one in quality, which formed a lot of soot. In view of this, not everyone had enough strength to remove the cartridge case and insert a new cartridge into the chamber. However, when using the weight of the weapon when reloading, this procedure became much easier and faster. True, only models with a long barrel were suitable for this. Apparently, this was the main reason why the weapon was not the greatest success, yet it required a certain skill from the shooter. 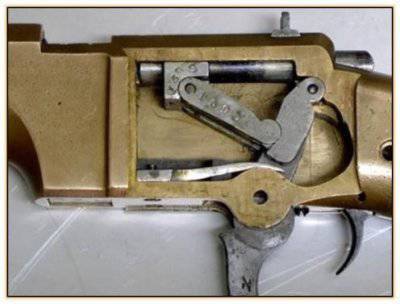 The system of the pistol is not particularly interesting, since it repeats (or rather the opposite) the work of the schemes of rifles and shotguns with the Henry brace. Equipment ammunition shop pistol ammunition causes much more interest. So, pushing the lock, it was necessary to take the store to the side, so that he went out of the frame of the gun, alternately inserting cartridges into it, it was necessary, holding them with your finger, to return the store back and fix it. Naturally, the capacity of the store completely depended on the length of the barrel of the pistol, since usually these two elements were equal in length. This is not the most convenient store device at that time, it significantly increased the reloading speed, still better than inserting each new cartridge into a drum drum at the revolver, so we can say that with the arrival of the Volcanic pistol, the time to reload and equip the weapon with cartridges significantly . In general, it should be noted that this gun with a rather simple design had a great influence on the further development of the weapon, so that, despite the small number of units produced, this gun did indeed make, albeit small, a revolution in the arms market, however, after how was out of production. By the way, there were other models of pistols of a similar design, but about them some other time.

Naturally, no one is going to accuse Henry of stealing an idea; nevertheless, this is an industry where the line between plagiarism and a great idea is very thin. It should be noted that the designer adapted the Volcanic pistol system for long-barreled weapons, made the reloading ring more convenient, but in my opinion it was not very good to call a separate part in my honor without specifying any true authors of the principle of work. Still, there is a difference when the same system is developed by different designers, and everyone knows about it, and the designers themselves use each other's work, and when one of the designers takes a weapon’s work pattern developed by another person and calls it with his name. I would like to believe that the name was nevertheless an initiative of Winchester, and not of the designer himself, since when an entrepreneur does this, it is somehow expected and not surprising, because it is thanks to such not-quite-honest deeds that most well-known entrepreneurs succeed .