What was it, and who is responsible for it?

November 24, 2021
170
In the south, exactly on the border of the Chechen Republic and Dagestan, a strange event was recorded. Many channels on the Internet say that this is a demonstration of force, and in two directions at once: in front of Dagestan and Ingushetia at the same time. 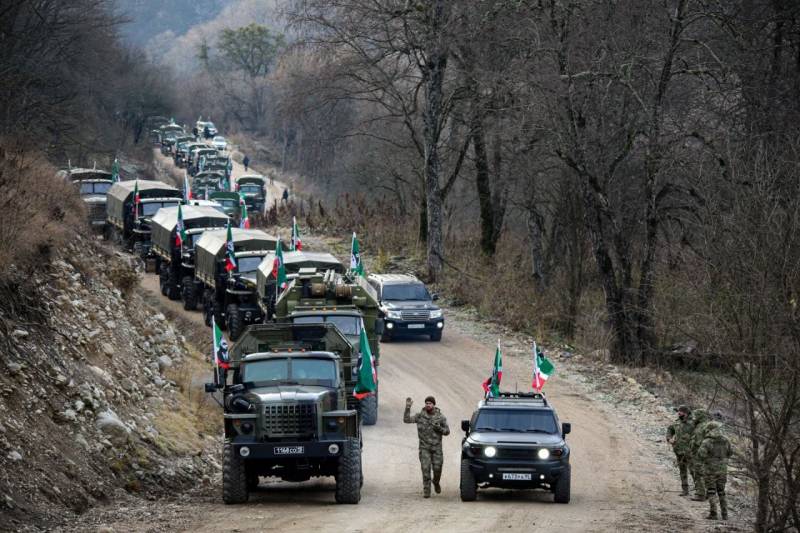 Photo: chechnyatoday.com
It is no secret that these republics have territorial disputes. It sounds frankly delusional, because these are not states, independent and legitimate, but federal entities within Russia. And what division of “ours” can be, if everything around is “ours”?

Apparently, the federal center is not going to do anything at all, and the situation will continue to escalate. And there is confirmation of this.

To begin with: everyone notes a very interesting detail and asks the question: what kind of armed formations are they? And under whose flag are they marching? Russian flags are not visible in the photographs, only the flags of the Chechen Republic. This suggests that the security forces of Chechnya seem to act independently, under the jurisdiction of the Chechen Republic.

In general, the actions of these people are very ambiguous. There is the Charter of the Internal Service, there is the Military Regulations, which regulate the movement of troops, including in columns. And the movement of a military column without identification marks of units, including, without the flag of Russia, is a direct violation of the points of these Statutes.

Here we see the absence of the Russian flag, as such. But there are flags of the Czech Republic, in a quantity that does not allow to interpret what is happening in a different way.

It was stated to be an exercise. Three days. Parts of the National Guard and the Ministry of Internal Affairs of the Chechen Republic. In the area of ​​the border with neighboring republics.

The key word here is "teachings." And at the same time a contradiction. If these are exercises, then they should be included in the training plan for training personnel. Or, if they are unplanned, they must be coordinated with the federal center, that is, with Moscow.

Otherwise, they are not teachings. Any such movements / exercises of the Russian Guard or the Ministry of Internal Affairs troops without the appropriate permits is called a mutiny. And this is already the jurisdiction of Art. 279 of the Criminal Code of the Russian Federation with all the ensuing consequences. And it is urgent to disconnect the connection and start isolating the region.

However, nothing of the kind happened, which means that the authorization to conduct the "exercises" was issued. Either in Moscow or in Rostov-on-Don, where the Southern Regional Control Center is located.

The permit was issued, but the nature of the "exercises" evokes thoughts about ... excessive independence of the Chechen security officials. Blatant disregard for Russian symbols testifies to this directly.

Perhaps Moscow should remind Ramzan Akhmadovich that the Chechen Republic is a republic within the Russian Federation, and not an independent state that has the right to scare neighbors with a demonstration of forces at the borders.

But the fact that Kadyrov is demonstrating his independence and independence is only half the battle. The second half is even more interesting. Who in Moscow and Rostov-on-Don indulges the head of the Chechen Republic, legitimizing such events?

By themselves, the "exercises" of the security forces in the border areas is not that nonsense, but it looks strange. Both the Ministry of Internal Affairs and the Rosgvardia are focused on a lot, but border protection and actions in border areas are under the authority of the FSB, which includes the Border Guard Service.

Chechnya has a border with a foreign state. With Georgia. 84 km in not the most pleasant and accessible area of ​​the Pankisi Gorge. And this piece is guarded by Russian border guards from the outpost in Itum-Kale. So there is no concern for the Chechen National Guard and the Ministry of Internal Affairs.

Why then such strange "teachings"?

Many believe that inter-republican "graters" on territorial issues are to blame. They say that on the Internet (and not only there) there are very heated battles on this topic at various levels.

It got to the point that the speaker of the Chechen parliament, Magomed Daudov, appointed a "shooter" to the representatives of the Council of Teips of Ingushetia on the bank of the Fortang River in order to decide on the ownership of lands according to Sharia.

In general, of course, savagery. Conduct a showdown on territorial claims in accordance with Sharia law in a secular state, and even after all the points in the disputes have been settled by the Constitutional Court ...

Now, between Chechnya and Ingushetia, another series of showdowns has begun around the village of Dattykh in the Sunzhensky region. Of course, all these "meetings on the shore" in accordance with the Sharia court look wild from the point of view of a resident of the European part of Russia. There are more effective ways to resolve territorial disputes.

However, what do the Chechen and Ingush republics share? This is the main question.

The land of Russia, which is part of the two republics, is divided.

In general, how worthy is it? Okay, territorial disputes between India and Pakistan have become classics. The two countries will fight for Jammu and Kashmir to the end of the century, and nothing can be done about it.

Should we expect the same in the case of Chechnya and Ingushetia or Chechnya and Dagestan? Good example. Then, perhaps, the heads of the Voronezh region should remember that part of the land was chopped off in favor of the Lipetsk region being created? And why is Voronezh worse than Grozny? Return!

And so, with the filing of Ramzan Akhmetovich, the slide into the savagery of the Middle Ages will begin. In the long term - the division of the entire country into specific principalities, which will be very easy to strangle one at a time.

The dream of overseas "partners".

On the whole, things don't look very good for the “foot soldier Putin”. Intimidation of neighbors, incomprehensible exercises at the borders, all this showdown ...

In the recent past, watching Kadyrov's actions to free captured Russians and militias, I was overwhelmed with only positive emotions. The man played out the situation beautifully, did a very useful job and did it very gracefully. Indeed, it was worthy of both a politician and a statesman. I will not deny that after those events I began to sympathize with Ramzan Akhmetovich. And the end of the war in Chechnya is also a matter of which one can be proud for the rest of his life.

What has changed is not entirely clear. Why, instead of such beautiful things, there are some sort of showdowns on the Internet, scandals ... Now, small-town battles for a piece of land that belongs to the Federation ...

But the demonstration of the capabilities of the forces on the border with Dagestan, and in general, does not fit into any framework.

Moscow is obliged to point out to the republics the need to stop any swarms. Especially on the topic of territories. This is the land of the Russian Federation, and there is nothing to divide it. This will not give any preferences or respect to those who do not understand the difference between their own and the state.

We live in the 21st century and today we have a lot of problems in addition to settling small-scale conflicts in the southern republics.

But the leaders of these republics should be the first to think about this.