Anti-tank weapons in Jordan: from licenses to in-house developments

Over the past decades, Jordan has managed to build its own military-industrial complex and launch the production of a mass of military products. In particular, various anti-tank systems are being developed and produced - both for their own army and for export. At the same time, the observed successes of the anti-tank direction are directly related to successful international cooperation.

Until the mid-XNUMXs, the Jordanian army relied only on the purchase of ready-made foreign anti-tank weapons. Then it was decided to create and master the production of its own rocket launcher. However, Jordan did not have the necessary competencies and could not solve such a problem on its own. She had to look for help abroad, and the way out was cooperation with Russia.

In 2005, the Russian NPO "Basalt" received a Jordanian order for the development of a promising grenade launcher according to the tactical and technical requirements of the customer. This project received the designation RPG-32 and the name "Hashim". Domestic documentation also uses the designations 6G40 and Barkas. The design took minimal time, and already in 2008 the first batch of grenade launchers and grenades was handed over to the customer.

Serial "Nashshabs" of one of the first parties, 2015
Full-scale serial production was planned for Jordan, and a new plant, Jadara Equipment & Defense Systems Co PSC, was specially built for it. For various reasons, the construction of the enterprise and preparation of production took several years. Nevertheless, in May 2013, the ceremonial launch of the enterprise and the production of grenade launchers and rounds took place. The RPG-32 entered serial production and service under the name "Nashshab".

The Jadara enterprise produces grenade launchers themselves, two types of shots with different warheads, as well as three models of sights. According to known data, a high degree of localization has been achieved by now, but production is still critically dependent on Russian components.

The main customer of the Nashshab is the Jordanian Armed Forces. For them, Jadara produced, according to various sources, several thousand grenade launchers and a large amount of ammunition. Even before the launch of production, the grenade launcher interested foreign customers. Contracts with Egypt, Iraq, UAE and Tunisia have been signed and fulfilled or are being implemented. 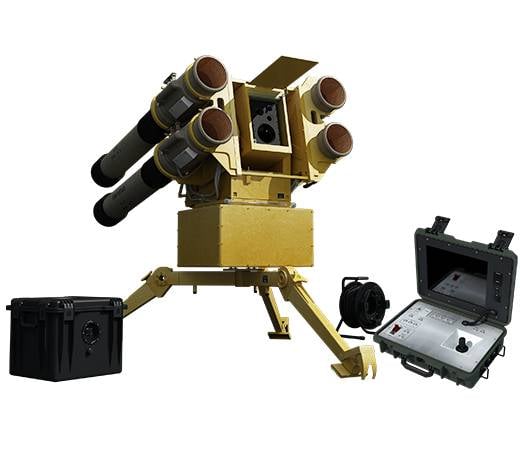 Soon after the launch of the production of "Nashshads", Jadara started developing its own projects. At that time, she could not create grenade launchers or missiles, and therefore began to design auxiliary means for the existing weapons... The results of this project were presented at the beginning of 2015 - these were two launchers of the Quad series.

The Quad-1 product was a portable, remotely controlled launcher. A mobile unit with four Nashshad grenade launchers and optoelectronic equipment was placed on the tripod machine. The installation is controlled from the operator's console via a 300 m cable. The control system is capable of making corrections for wind and target movement. The total mass of the complex is 110 kg.

Installation Quad-2 was intended for installation on cars or other platforms. It is made on the basis of a swivel base on which there is a swinging frame with optics and four grenade launchers. Provided for remote control; the console can be placed inside the host machine or carried out. 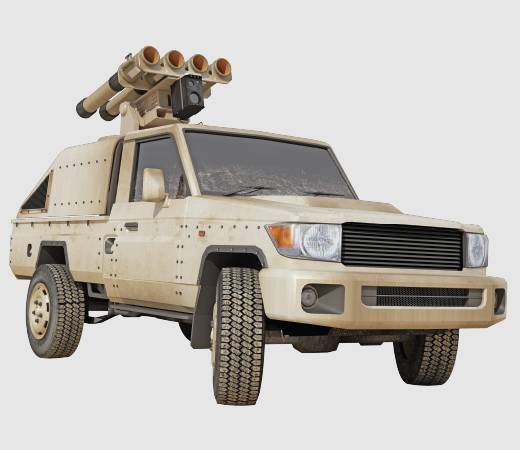 Vehicle with combat module Quad-2
Quad products are regularly shown at various exhibitions and attract attention. Not so long ago, it was reported about participation in several foreign tenders. However, nothing is known about the commercial success of these projects. Probably, automatic means for launching unguided grenades have limited prospects at best.

In May 2018, Jadara introduced its first anti-tank missile system, called the Terminator. It was argued that this ATGM was created independently and taking into account the experience in the production of the Nashshab grenade launcher. By the time of the first demonstration, the complex was ready for serial production in the interests of customers.

It is curious that immediately after the premiere, a fairly plausible version emerged about the foreign origin of the complex. The fact is that the Jordanian industry, despite the presence of the production of RPG-32, did not have the necessary competencies to develop an ATGM. In addition, the resulting "Terminator" in its appearance and characteristics was similar to the slightly modified "Corsair" complex of the Ukrainian design bureau "Luch". However, the version of joint development or licensed production was not officially confirmed or refuted. 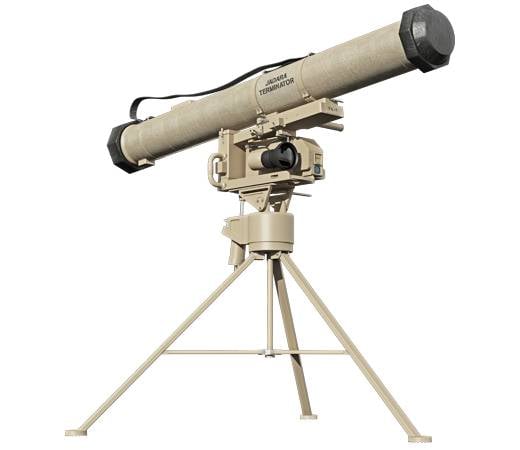 Portable version of ATGM Terminator
During the first show, it was reported that the Jadara Terminator would soon be tested by the Jordanian army, after which it could enter service. The development company was ready to start production in the required quantities in the shortest possible time. Foreign orders were also expected.

At its first exhibition "Terminator" was present in two versions at once. The first of them was an ATGM of a traditional appearance in a wearable performance on a tripod. The second option provides for the installation of two TPK with missiles on a remotely controlled weapon station for equipment. In this case, the missiles are complemented by a normal caliber machine gun, and their use is provided by standard optics.

Later, the Quad Terminator missile and machine gun was presented. It is similar to the showcase model of 2018, but it is equipped with four missiles at once. A different version of such a module has been demonstrated at recent exhibitions. It differs in design and layout, has no machine-gun armament, but still carries four missiles. 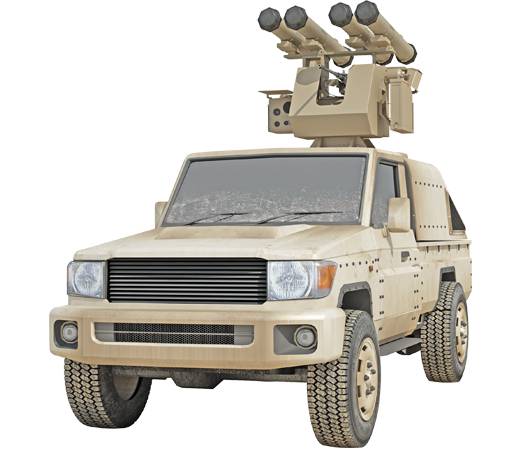 Quad Terminator by car
Recently it became known that "Kvad-Terminator" participates in competitions of unnamed foreign countries. This ATGM is offered for installation on various armored vehicles. Will you manage to get the desired contracts - time will tell.

Despite the emergence of its own projects and the expected interaction with third countries, the Jordanian industry seeks to maintain and develop cooperation with Russian colleagues. Regular messages on this topic appeared this year.

At the end of February, the Russian Rosoboronexport and Jadara signed an agreement to launch licensed production of the Kornet-E anti-tank missile system at the Jordanian site. Representatives of the Russian side visited the plant and studied its possibilities. It was found that the enterprise is ready to master the assembly of modern Russian missiles and other components. 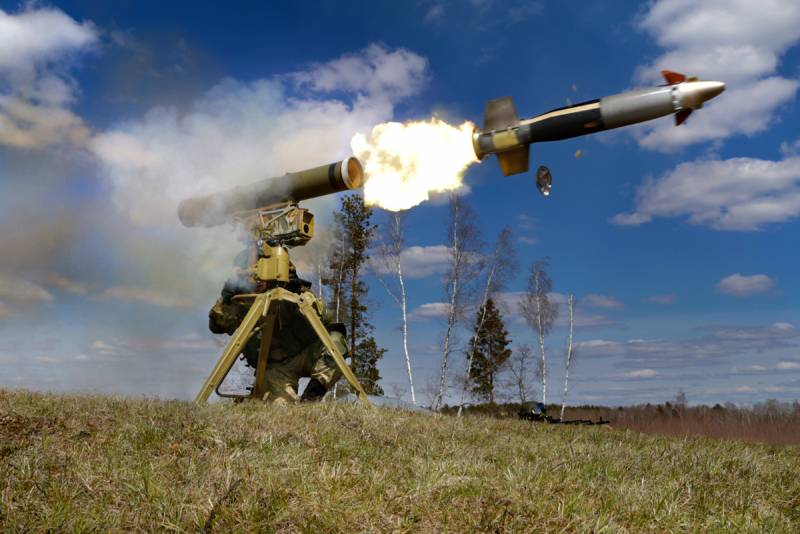 Shooting from the Russian ATGM "Kornet"
The emergence of such an agreement is understandable and understandable. Jordan is interested in obtaining modern anti-tank systems with high performance, but so far it cannot create such systems on its own. Obtaining a license for the production of an advanced model of Russian design gives the Jordanian side obvious benefits - and no less beneficial for our industry.

Thus, over the past 10-15 years, Jordan, with the active help of foreign industry, mainly Russian, has managed to master new technologies and designs. Grenade launchers and guided missiles, as well as auxiliary equipment and systems are produced under license and according to our own projects. In addition, this year it was planned to start assembling another modern ATGM.

All this shows that the military and political leadership of Jordan is willing to build, develop and modernize its army and defense industry - and is using all available opportunities. It should be noted that such processes in the field of anti-tank weapons are still critically dependent on foreign aid, mainly Russian. At the same time, attempts are already being made to create their own projects, and in the future this may change the current situation. Time will tell whether Jordan will be able to become a full-fledged independent developer and manufacturer of anti-tank weapons.