"A terrible and frightening sight." Dramatic death of the battleship "Barham" 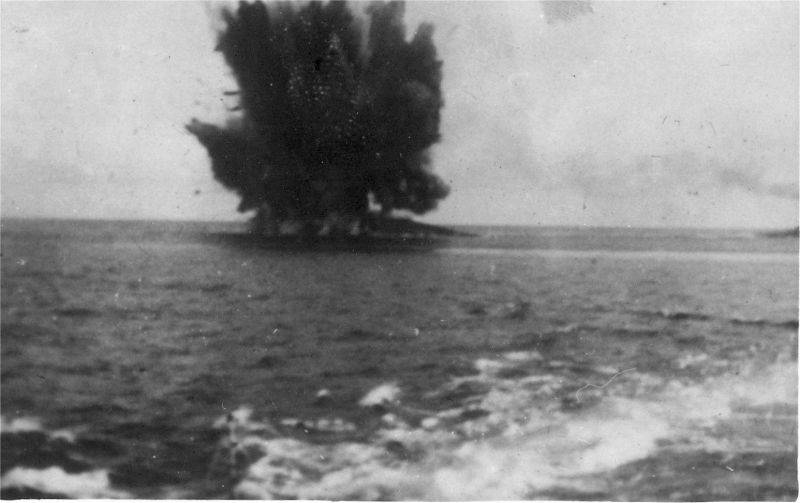 The explosion of the British battleship "Barham"

In the course of the naval arms race, which began even before the outbreak of the First World War, the project of battleships of the Queen Elizabeth class was born. The lead ship of the series was named after Queen Elizabeth I of England and was launched in 1913.

A feature of the new battleships was the fuel they used. England switched the fleet from coal to oil. The first battleships to use oil heating were the Queen Elizabeth-class battleships. 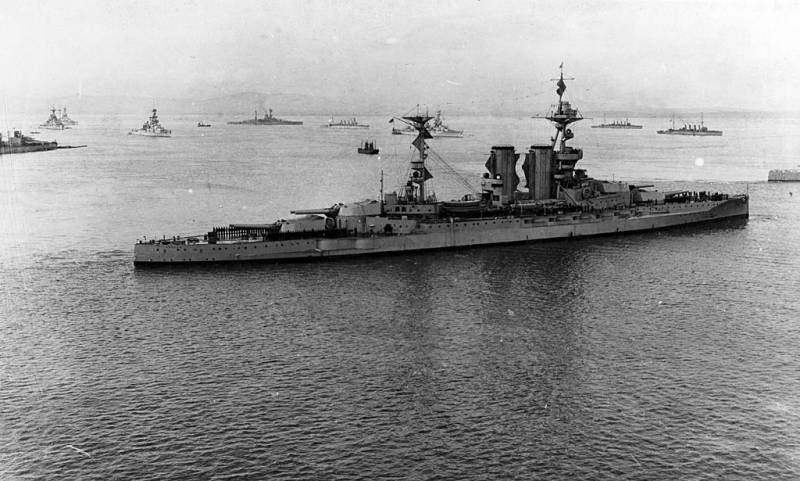 The battleship "Barham" ("Barem") was launched in October 1914 and commissioned in October 1915. The flagship of the 5th battleship squadron, which included ships of the same type. During the Battle of Jutland (May 31 - June 1, 1916), the largest naval battle of the First World War, the 5th Squadron was part of the vanguard of the British fleet and entered into battle with the German battlecruisers. The battleship Worspite was badly damaged, having sustained 13 hits from 280 mm shells. The dreadnought "Malaya" was hit by 8 shells. Barham received 6 hits, 28 people were killed and 37 injured.

After the battle, the battleships were repaired, and they returned to service. After the conclusion of the Washington Agreement in 1922, England sent for metal or reclassified most of its obsolete dreadnoughts. But the battleships of the Kiun Elizabeth class were retained. "Barham" was part of the Atlantic and Mediterranean squadrons.

In the 1920s, the ships were reinforced with anti-torpedo protection, deck armor and air defense systems. In the first half of the 30s, the battleship underwent a major modernization: the stern superstructure, the torpedo tube were rebuilt, anti-aircraft artillery, underwater protection, and turret armor were reinforced again. 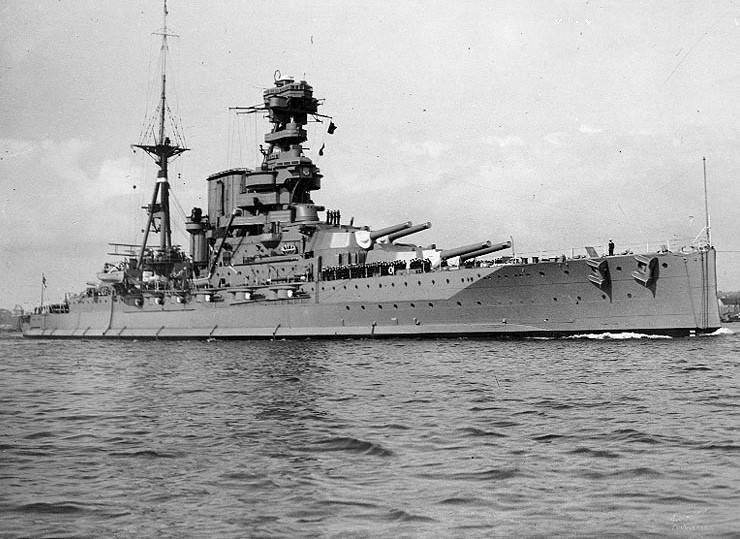 In the early days of World War II, Barham served with the British Mediterranean Fleet. Then he received the order to join the fleet of the mother country, which directly defended Great Britain. On December 6, 1939, the dreadnought left Malta, accompanied by two destroyers. A week later, when the ships approached the Clyde base in Scotland, a catastrophe occurred: "Barham" accidentally rammed the destroyer "Duches" in thick fog, killing 129 people.

On December 15, the battleship as part of the metropolitan fleet went out to meet the convoy with troops from Canada. The operation was successful, the convoy reached its destination. However, a detachment of ships, led by a battleship, remained at sea for patrolling. The British feared a new breakthrough by German ships into the Atlantic.

While patrolling, Barham collided with the German U-30 submarine Lieutenant Commander Fritz Julius Lemp. On December 28, 1939, the submarine fired four torpedoes at the British squadron. One hit the ship of the line, four sailors were killed, two were wounded. Barham was injured but managed to make it to Liverpool. This attack showed that British large ships were vulnerable to torpedo attacks.

After six months of repairs, the battleship returned to service.

In September 1940, the British High Command decided to launch an operation against the Vichy forces in Senegal. The British wanted this colony and the French troops stationed there, including the unfinished battleship Richelieu, to side with the Free France led by de Gaulle and the anti-Hitler coalition. Also, the port of Dakar was the best naval base in the region, and some of the gold from France and Poland was located here.

However, the French troops in Dakar at this time considered de Gaulle a traitor and resisted, repelling the attack of the British fleet under the leadership of Cunningham. The battleship Resolution was torpedoed by a French submarine and sent to the United States for repairs. And "Barham" withstood two hits from the coastal battery.

Following this setback, Barham returned to service in the Mediterranean Fleet. He accompanied convoys to Malta and Alexandria, fired at Bardia, took part in the battle at Cape Matapan in March 1941, where 3 Italian cruisers and 2 destroyers were sunk and the battleship was damaged.

During the Battle of Crete in May 1941, Barham was attacked by a German aviation... The ship was hit by a 250-kg bomb, a fire started, 5 people died, 6 were wounded. In Alexandria, the battleship could not be repaired - the dry dock was small. The Barham was taken to Durban, South Africa for repairs. In August 1941, the battleship returned to Alexandria and again became the flagship of the 1st squadron. 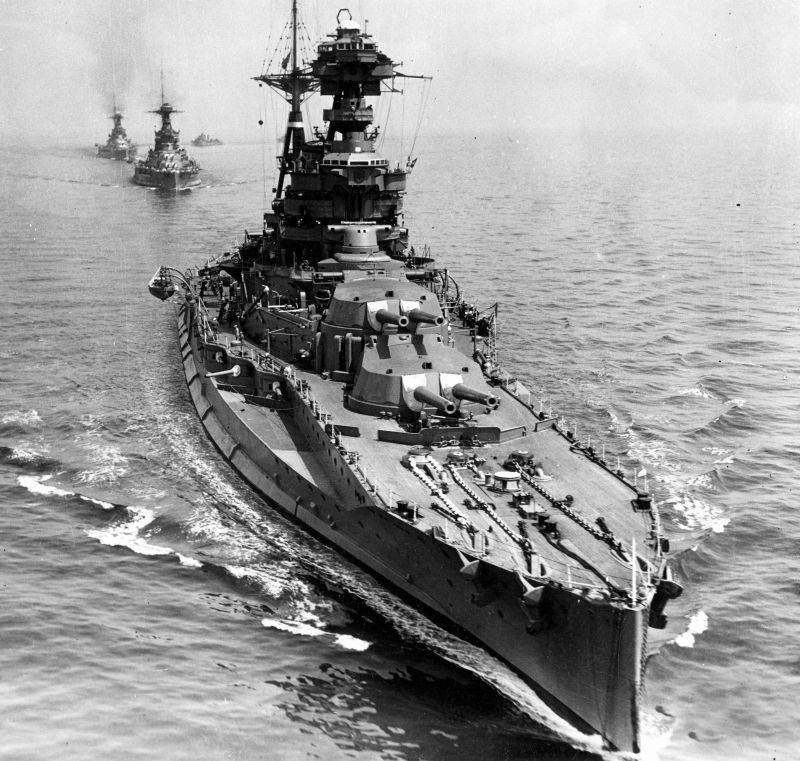 The British battleship "Barham" is at the head of the battleship formation. 1941 g.

At first, the situation in the Mediterranean theater was not bad for the British. The French fleet and its bases, which after the defeat of France could have been captured by the Germans and Italians, were partly captured by the British, partly sunk and neutralized. The Italians were rather passive and could not stand up to the British on their own. But with the appearance of the Luftwaffe in the Mediterranean, the capture of Greece and Crete by the Axis countries, the landing of Rommel's corps in Libya - the situation changed not in favor of England.

In addition, Hitler sent his submarines to the Mediterranean. In September 1941, the first German submarines broke through Gibraltar into the Mediterranean Sea. They were based in Italy and Greece. On November 13, the German submarine U-81 of Friedrich Geggenberg knocked out the newest British aircraft carrier "Arc Royal", which had previously become famous during the hunt for the German battleship "Bismarck" (The Hunt for the Bismarck). The aircraft carrier sank the next day, the crew was rescued.

On November 13, 1941, the submarine U-331, under the command of Hans-Dietrich Freyer von Tiesenhausen, set out on its third military campaign. On November 17, the boat delivered a group of saboteurs to Egypt with the aim of blowing up the railway. The mission was unsuccessful: the saboteurs were able to plant mines, but were discovered and caught by the British. Tiesenhausen unsuccessfully waited for the group, then received an order to go east, to Es-Sallum, where the British army began an offensive against the German-Italian forces in Libya (Operation Crusader. How the Desert Fox slept through an attack by the British 8th Army; Part 2). British ships shelled the coast, supporting the advance of their troops.

The Germans noticed a faint noise from the engines. The main body of Cunningham's Mediterranean fleet was on course. Three British battleships, accompanied by destroyers, went to intercept the Italian convoys. Tiesenhausen began to maneuver to reach the target. The Germans were able to slip through the destroyers and chose a target.

At 16 o'clock. 25 minutes the submarine fired four torpedoes from a distance of about 400 m. Soon the Germans heard three explosions, then another. But they could only guess where they got to and what their success was. Immediately after the volley, the boat showed the wheelhouse on the surface, it was noticed. Battleship Valiant tried to ram the enemy, but U-331 managed to go deep. The Germans happily escaped the depth charges from the destroyers.

In the meantime, tragedy broke out on the surface. The British dreadnought received three torpedoes and lay down in the water with a lined side. When his pipe reached the water, there was a powerful explosion that blew the ship to pieces. Obviously, there was a detonation of the ammunition of the main battery guns. But this is only a version. The exact cause of the explosion is unknown.

The sea giant literally disappeared into a cloud of smoke. Cunningham wrote that it was "a terrible and frightening sight."

The death of the dreadnought was so fast that most of the crew did not have time to escape. Some of the sailors were unable to get onto the deck due to the fact that the Barham was heavily heeled. And those who were able to do this were killed in the explosion. 862 people died. The commander of the ship, Jeffrey Cook, was also killed. More than 440 people were picked up from the water. "Barham" was the only battleship that the submarine sank on the high seas.

Interestingly, the death of the ship could be filmed. The squadron included a cameraman who filmed the actions of the ships at sea. He managed to capture the tragic death of "Barham".

Tiesenhausen was awarded the 1st class Iron Cross for his success, then the Knight's Cross. Mussolini awarded the captain of the Kriegsmarine with Italy's highest military award - the Gold Medal for Bravery. 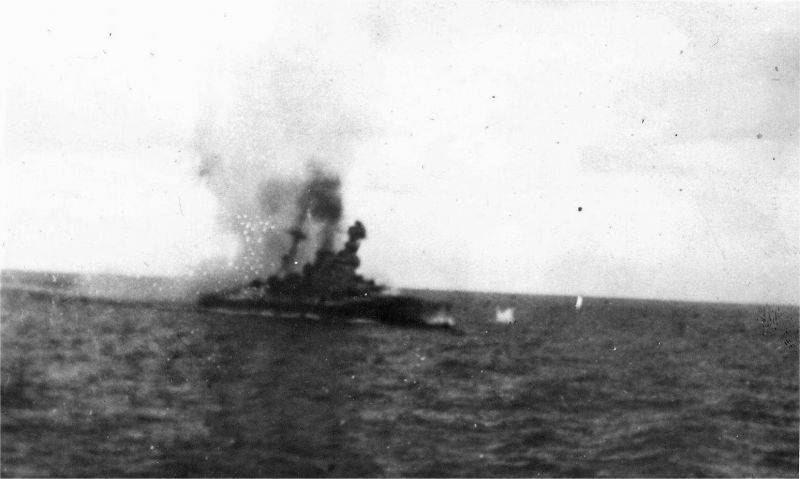