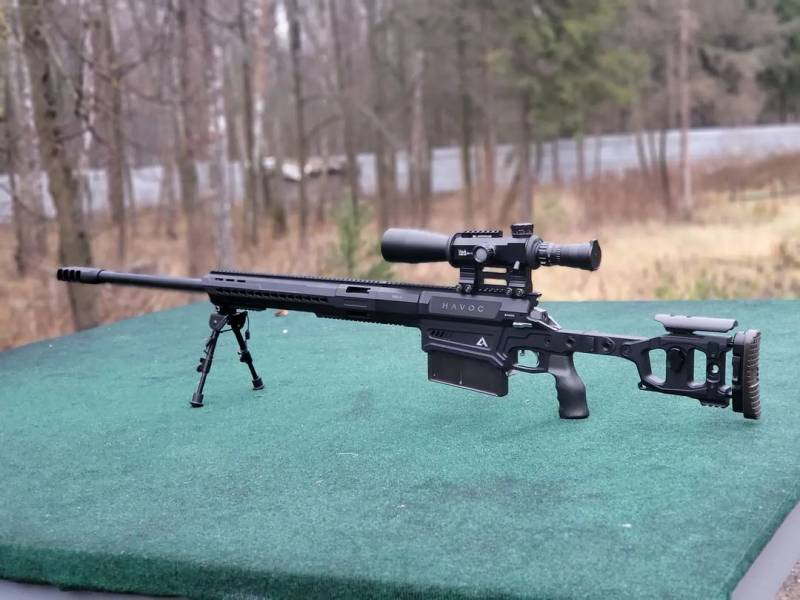 Last year, the Russian armory Lobaev Arms has announced its new development in the field of high-precision long-range rifles - DXL-5 Havoc. To date, this project has reached the stage of manufacturing and testing a prototype. A few days ago, the prototype rifle was shown to the public, and in addition, they talked about its features and new capabilities.

The name DXL-5 in June last year was first disclosed by the general director of the developer company Vladislav Lobaev. Then he said that the company was working on a promising sniper complex consisting of a rifle and a cartridge with increased precision fire range characteristics. It was planned to provide confident shooting at a distance of 3 km and a maximum range of up to 6-7 km.

Due to the pandemic, it was impossible to give an exact date for the completion of the work. A new rifle could appear and go out for testing by early 2021 or later. Unfortunately, the development really took a long time. So, in early July this year, V. Lobaev said that work on the DXL-5 is still ongoing. At the same time, he noted the possibility of starting factory tests in October or November.

Such plans were successfully fulfilled. At the end of October, Lobaev Arms published a short video with individual parts of an experimental rifle, which showed the ease of the slide. In the near future, it was planned to carry out a full assembly of the experimental DXL-5, combining the parts shown with others. 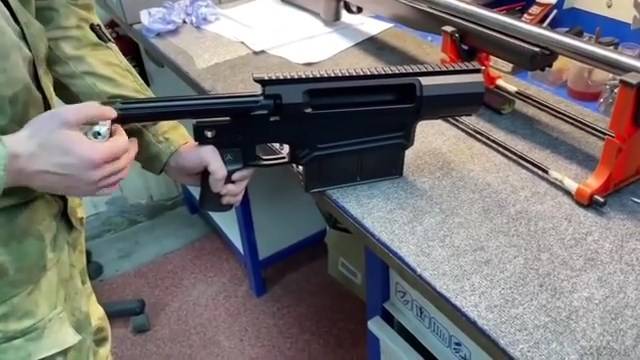 Weapons at the manufacturing stage
On November 19, an assembled experimental rifle was shown for the first time. They also revealed the key features of the project and its new capabilities. The performance characteristics of the product were not disclosed. At the same time, it was reported that the rifle was ready for testing. The check will take place in several stages, which will allow you to consistently work out several options for the execution of weapons.

Unfortunately for domestic fans of high-precision shooting, the new DXL-5 is still intended only for export deliveries. However, from the comments of the developers it may follow that in the future such weapons will be released on the Russian market.

Earlier it was reported that the DXL-5 rifle will be able to use a new specially developed cartridge and will have increased range characteristics. According to the latest news, the project has even more interesting features, which will also have a positive effect on the final characteristics.

The main idea of ​​the DXL-5 project in its current form is to create a multi-caliber sniper complex capable of using different types of ammunition. So, the first prototype is capable of using the Soviet / Russian cartridge 12,7x108 mm and foreign 12,7x99 mm / .50 BMG. The development company notes that the DXL-5 became the first domestic sniper rifle under the .50 BMG. In addition, it turns out to be the first model in the world capable of using 12,7-mm cartridges of the Soviet and American types. 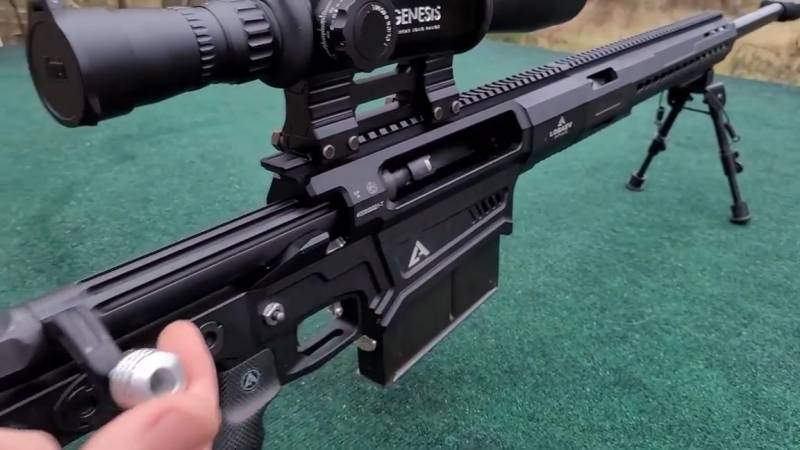 Lobaev Arms writes that the Havoc project involves the use of a total of six different ammunition. Two of them, having a caliber of 12,7 mm, are standard. It is also expected to work out four "much more delicious and never before seen" calibers.

Externally and in design, the new Havoc rifle is similar to other products of the "counter-sniper" DXL series from Lobaev Arms. This is a traditional long-barreled weapon with magazine-fed ammunition and manual reloading. It is possible to install various sights and other equipment, for which there are strips. Also used is a folding stock, characteristic of rifles of the series, with several degrees of adjustment.

The DXL-5 rifle is built on the basis of a large and durable receiver of complex shape. It has mounts for the barrel, slide rails for the bolt, and a magazine shaft. The barrel is locked by turning the bolt. The trigger is of the trigger type and has traditional controls.

The Havoc project provides for the use of interchangeable barrels for different ammunition. Such barrels should have a similar external geometry and unified mounting means in the receiver. How exactly the barrel connects to the box has not yet been reported. Barrels differ from each other in the size and shape of the chamber, as well as in the caliber and cutting of the channel. The shown prototype received a muzzle brake-compensator and, probably, such devices will be used on barrels of all calibers. 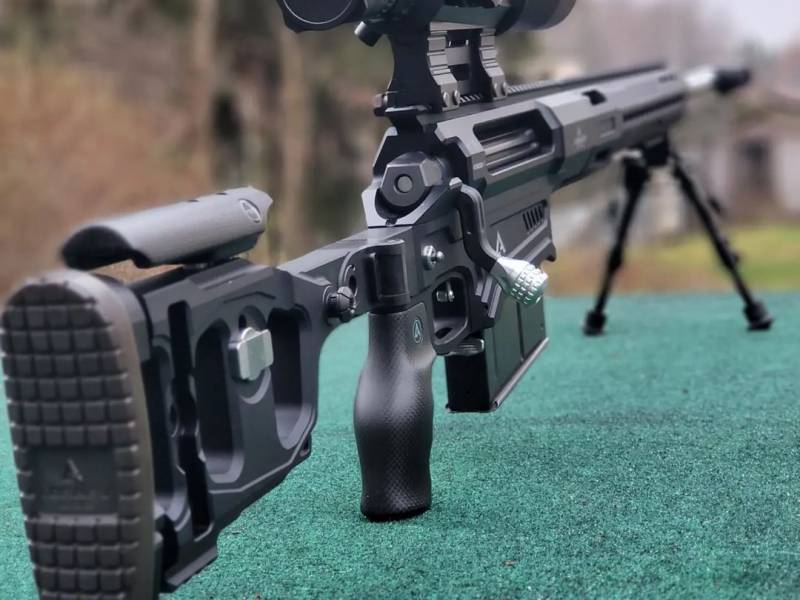 How the compatibility of the bolt group with different cartridges is ensured is unknown. Probably, a common shutter with replaceable larvae is used. The latter should have cups of different sizes for each cartridge used.

Thus, the possibility of using different calibers / cartridges is provided by replacing literally a couple of key parts. However, the developer has not yet specified how quickly and easily such a replacement is carried out.

The new development of Lobaev Arms is of interest, at least from a technical point of view. Multi-caliber systems capable of using different types of ammunition do not appear very often, and each such sample naturally attracts attention. In addition, there is already a rather interesting selection of cartridges, and new calibers and ammunition are promised.

It should be noted that the multi-caliber scheme is not an end in itself for the DXL-5 project, but is considered as a means of obtaining new capabilities and maximum combat characteristics. Thus, a universal platform was developed, on the basis of which samples of weapons can be created for a specific cartridge with the required parameters. At the same time, a high degree of unification is provided, which to a certain extent simplifies and reduces the cost of production. 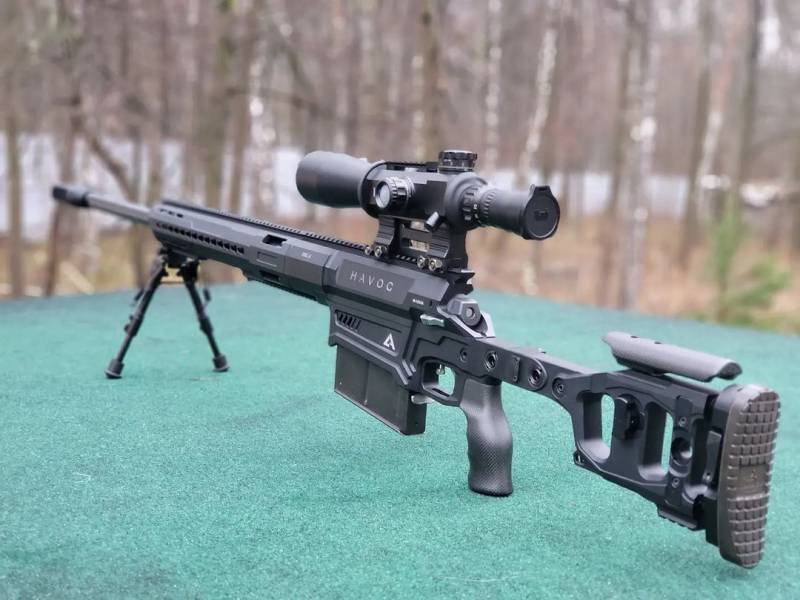 From the point of view of operation, the DXL-5 complex is interesting for the choice of ammunition that best suits the tasks and requirements of the customer and / or the shooter. The rifle is already capable of using two main large-caliber cartridges, and the development company does not plan to stop there. Thus, the flexibility of the rifle in terms of application will increase.

What exactly calibers will be introduced in the new modifications has not yet been reported. At the same time, one should recall the news of last summer, when they first talked about "hitherto unseen" ammunition. Then it was reported that a completely new cartridge of increased size with an increased bullet speed would be created for the rifle. According to some estimates, a bullet of such an ammunition will be able to develop hypersonic speed, which will give a significant increase in accuracy and range characteristics.

Apparently, it is the new cartridge that will allow the Havoc rifle to fire at a record 6-7 km. Other cartridges, ranging from 12,7x108 mm or .50 BMG, have more modest characteristics, but will also allow you to shoot at significant ranges. Accordingly, rifles in different designs will cover a large range of ranges - depending on current needs and combat missions.

However, one should not forget that universality does not always justify itself. The combination of different functions and capabilities in one sample can lead to specific disadvantages and problems. The DXL-5 rifle has so far been made in only one caliber and is still undergoing the first tests. She has yet to show her efficiency and effectiveness in all planned options. 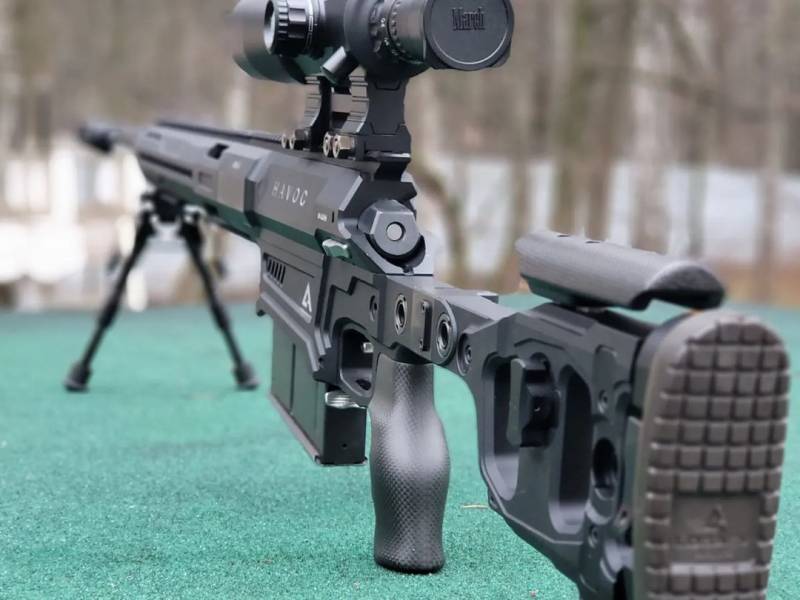 Another problem may be the developed "hypersonic" cartridge, due to which they will provide the maximum possible performance. The development of a new ammunition is always quite difficult and rarely goes without difficulties and problems. However, the expected increase in performance and the receipt of new combat capabilities will fully justify all efforts and costs.

In the process of implementation

Thus, the leading domestic manufacturer of high-precision systems has developed another interesting sample of weapons and has already brought it to testing. Unfortunately, the appearance of the experimental DXL-5 rifle was noticeably behind the previously announced dates, but the protracted wait was worth it. Previously, Lobaev Arms spoke only about the intention to increase the maximum firing range, and now we are talking about a rifle of modular architecture with the widest possibilities.

At the moment, the DXL-5 Havoc in the first version is out for testing and is demonstrating its capabilities in the original 12,7 mm caliber for two different cartridges. In the near future, it is expected that new modifications will appear for other ammunition, incl. for a previously announced product with record parameters. Each stage of testing will take some time, which will understandably affect the timing of the entire project. However, if successful, all the time and effort spent will fully justify themselves.